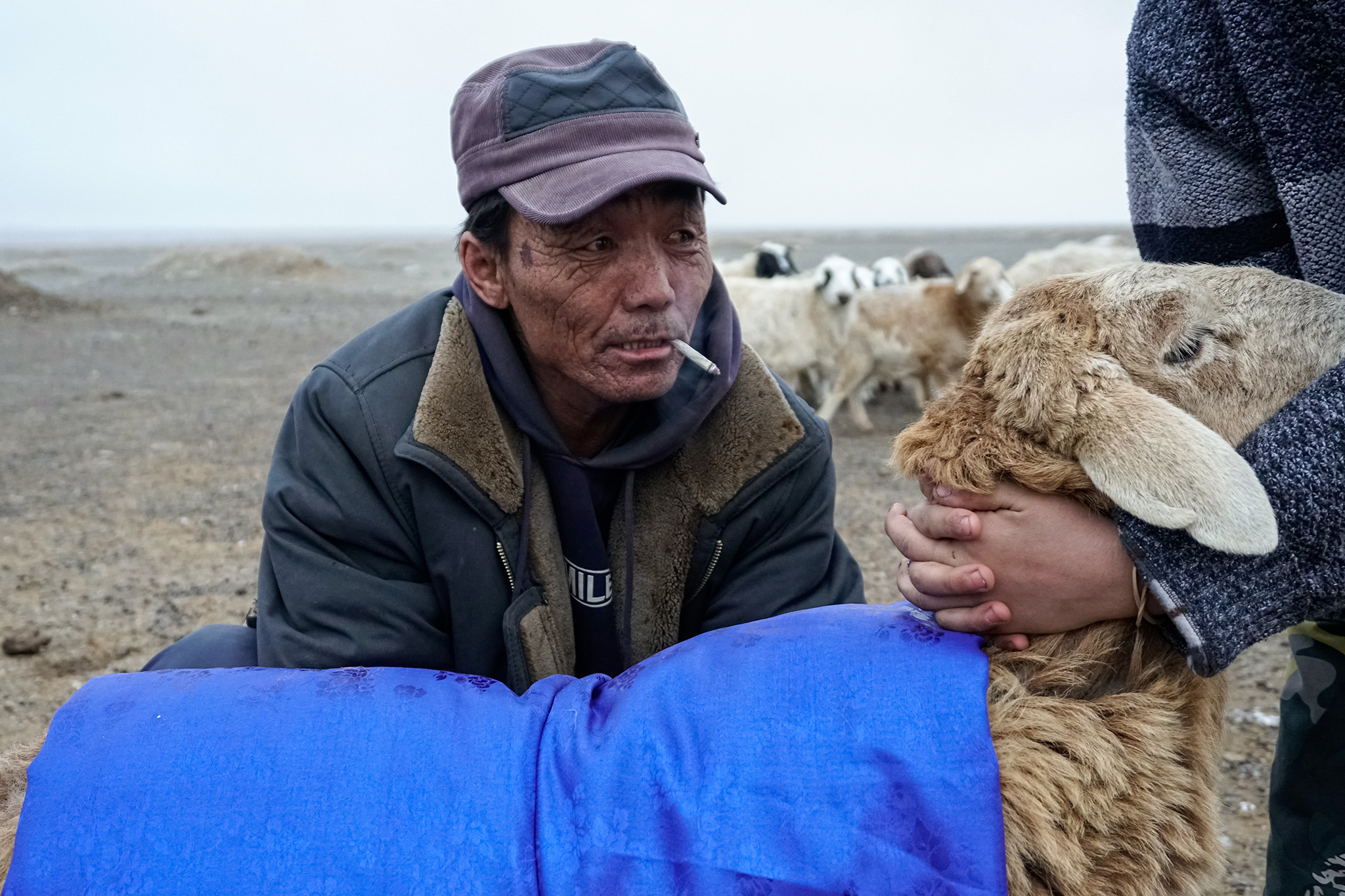 DALANZADGAD, UMNUGOVI PROVINCE, MONGOLIA — Clouds gather in the moody winter sky, and the wind picks up. As the temperature plummets, sheep and goats turn from the pasture where they were grazing to huddle in the shelter of a shed.

Byambasaikhan Sanjid, 47, his face tanned from a career outdoors, notices the changing weather and emerges from his ger with an armful of insulated vests in a variety of colors. After he arranges them on the animals, among them cattle, horses and camels, he retrieves a bundle of hay – one of the few remaining – from the shelter roof and spreads it out for the herd, along with some feed.

“We worked hard to overcome this cold winter without even having time to rest at home,” Byambasaikhan says. “It was a harsh winter which could hurt even the healthiest cattle.”

Raising livestock is one of Mongolia’s leading industries and the centerpiece of its economy. More than one-third of the country’s labor force works in the sector, which accounts for more than 10% of the country’s gross domestic product, and much of the economy is tied to the livestock industry indirectly, according to the Mongolian Agricultural Exchange. But the combination of climate change, poor land management and overherding is threatening the Mongolian way of life.

Extreme weather is at the center of this crisis. Much of the country is now in the midst of a dzud, a unique weather phenomenon characterized by severe cold, excessive snow and other factors that prevent livestock from grazing, which leads to starvation and death.

Dzuds have long occurred in Mongolia, but their frequency and intensity have increased in recent years. Whereas historically, dzuds occurred once or twice a decade, they are now occurring every two or three years, according to the Ministry of Food, Agriculture and Light Industry. 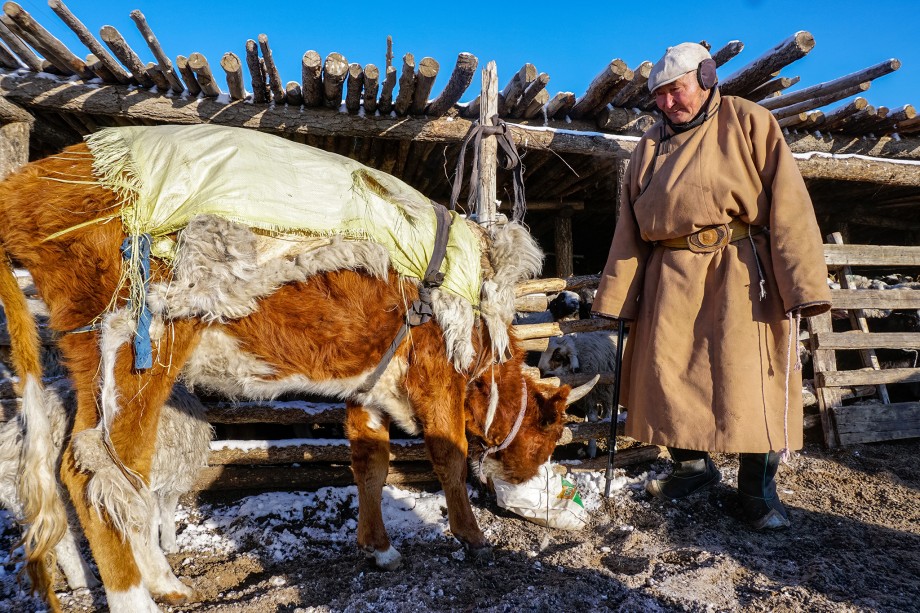 Bazargur Badamsumberel, a herder, feeds one of his cows. The dzud has made it difficult to find pastures for grazing, and many animals are starving.

Almost all of Mongolia could experience a dzud this year, according to the National Agency for Meteorology and Environmental Monitoring. About 60% of the country is classified as having a “high” risk of dzud, while 20% is at “very high” risk. As of Jan. 10, about 70% of Mongolia was covered in snow, according to the agency. Temperatures in many areas are expected to fall below average by 3 to 10 degrees Celsius.

“We could not get any hay this year,” says Bazargur Badamsumberel, 73, a herder in Erdenebulgan, a district in Arkhangai province. “Pasture is getting worse from year to year.”

The foundation for this year’s harsh winter was laid last summer. The average annual temperature in Mongolia has risen by 2.25 degrees Celsius between 1939 and 2018, reducing precipitation and increasing the desertification of pastureland.

Drought conditions over the summer forced Byambasaikhan and his family to travel more than 400 kilometers (250 miles) with their herd, searching for fruitful land. Despite these efforts, he was unable to find an area suitable for grazing and was forced to reduce the size of his herd by half to 500 animals. In November, he started to purchase feed, spending more than 10 million Mongolian togrogs ($3,500) to give the remaining animals a chance at surviving the winter.

The demand for feed has caused prices to shoot up dramatically, further increasing the pressure on herders. Whereas 25 kilograms (55 pounds) of compressed feed cost 12,000 togrogs ($4.20) a year ago, according to Byambasuren Sosoo, a feed seller, the same amount costs 50% more this year.

“Our finances are in crisis for sure,” Byambasaikhan says. “As soon as we have money, we buy animal feed and grass instead of flour and rice.”

Many herders have also had to spend millions of togrogs to rent shelters to protect their livestock during the winter. 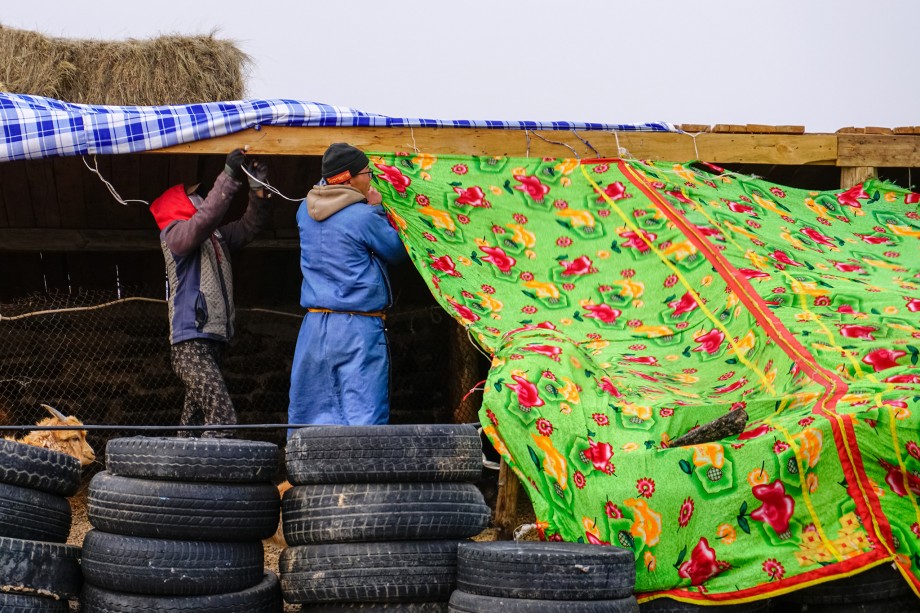 Herders use shelters to protect their livestock from harsh winter conditions.

Changing weather conditions are not solely responsible for the challenges facing herders. Mongolia transitioned to a market economy in 1990 and privatized the livestock industry. Since then, as more people have turned to herding as a profession, and as herders have worked to increase their income, the number of livestock has tripled, leading to overgrazing.

Overgrazing has been the main contributor to soil erosion, which exacerbates desertification. Today, scientists estimate that more than 78% of Mongolia’s pastures suffer from degradation, according to a report from the Mongolian Pastureland Users Association.

As pastureland dwindles, the lack of food makes cattle increasingly vulnerable to dzuds, says Chuluunbayar Choijilsuren, a specialist in the Office of Food and Agriculture in Arkhangai province.

“It means that constantly hungry, undernourished livestock give birth to new cattle with malnutrition, poor vitality, a slim chance of surviving winter, and a lack of productivity and benefits year after year,” Chuluunbayar says.

The government launched a national program in 2018 to promote intensive livestock farming, with the goal of enhancing livestock quality. Herders, including Bazargur and Byambasaikhan, are working to improve their herds so that they can better withstand the winter months.

“We use all kinds of methods, and I am almost becoming a veterinarian,” Byambasaikhan says. 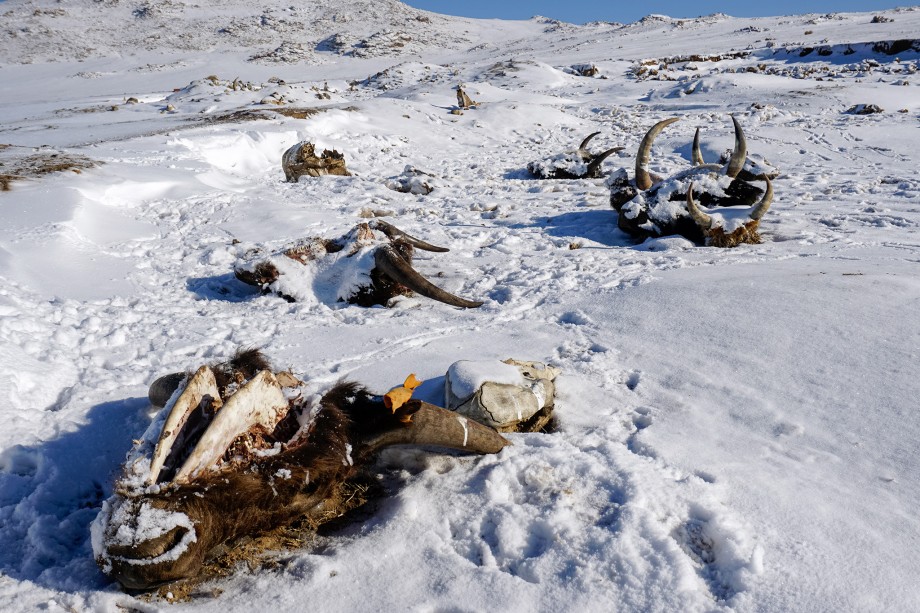 Livestock that died during the dzud. The lack of food means animals are chronically undernourished, making it harder for them to survive the winter.

The government is aware that overgrazing is a serious problem. “Mongolia’s pastures are overused, and there is a high risk that the vegetation on the pastures will change and the natural strength of the plants will be lost,” says Munkhnasan Tsevegmed, a specialist on pasture use and protection at the Livestock Policy Implementation Coordination Department in the Ministry of Food, Agriculture and Light Industry. “State and local budgets have relatively little resources for pastures.”

In 2019, the government developed a methodology to monitor pastureland use, and last year it approved a new tax on livestock to help fund efforts to rehabilitate and manage the pastureland and promote sustainable use – though a tax exemption has been put in place until July, as part of the country’s coronavirus relief efforts.

While the government has occasionally considered more sweeping regulations to govern the use of pastureland, they have not passed.

“Unfortunately, to date, we have not been able to pass a pasture law,” Munkhnasan says.

Without stronger environmental policies and regulation around land use, however, dzuds will continue to be a threat, says Dr. Undarmaa Jamsran, a professor and head of the Ecosystem Research Center at the Mongolian University of Life Sciences. She says the government’s focus on improving livestock quality fails to address larger environmental threats.

“Mongolia has already faced the issue of improper use of pasture,” Undarmaa says. “Now, we will face the threat of having no pasture anymore, if we do not correct it or put it back into a normal situation.”