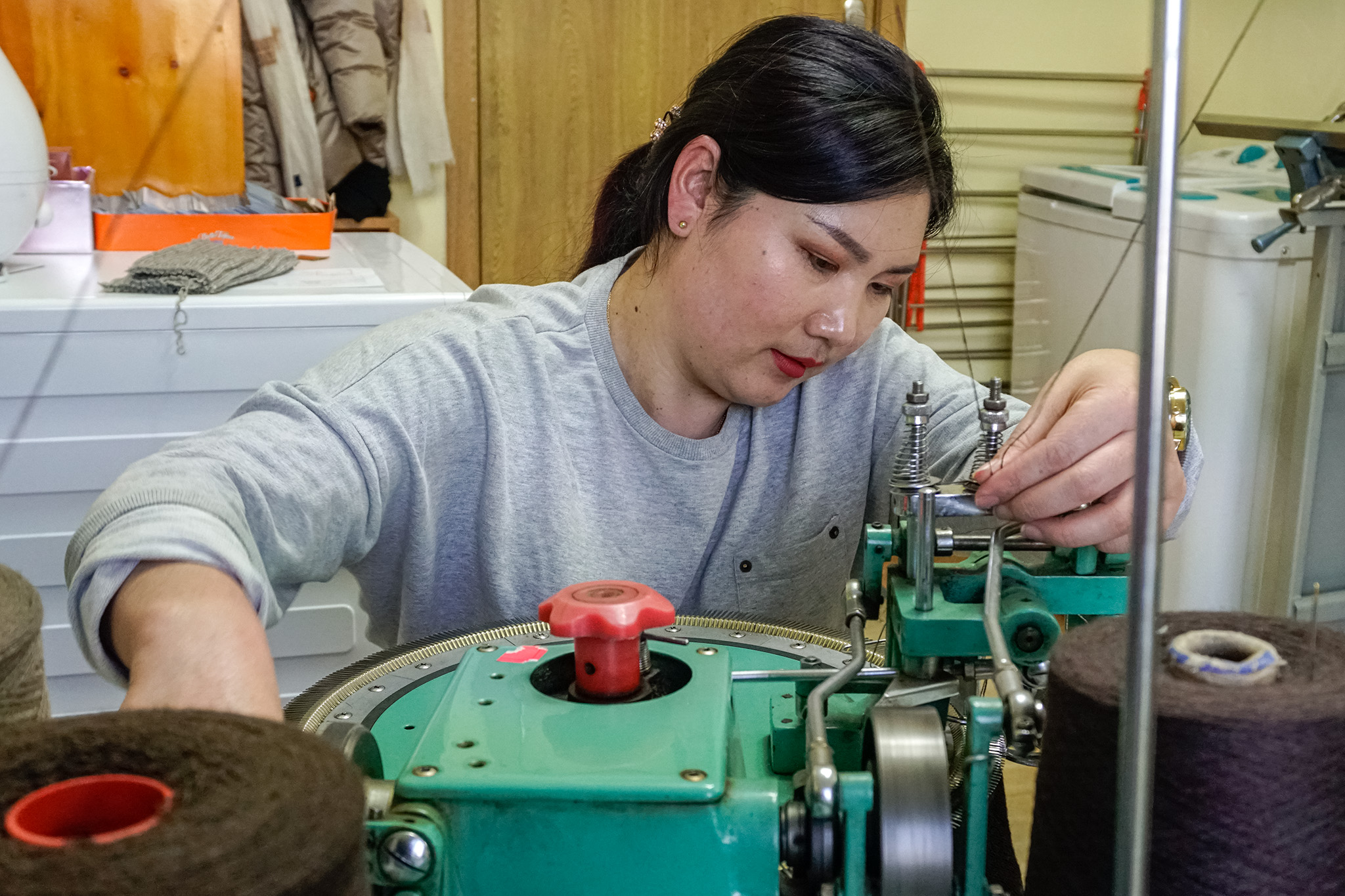 Bayarmagnai Batsuuri stands nearby and watches stunning patterns emerge from the loom.

Bayarmagnai founded the Ar Arvijin Delgerekh cooperative, which specializes in producing and weaving yak wool. The material, according to the cooperative, rivals the quality of cashmere and has the potential to boost income opportunities for yak herders in this central Mongolian province.

Arkhangai province is home to 32% of the country’s yak population, but herders have not historically used the yak’s wool.

Wild yaks, which are long-haired bovines found throughout the Himalayan region and as far north as Mongolia and Siberia, were previously considered endangered but are now tagged as vulnerable. 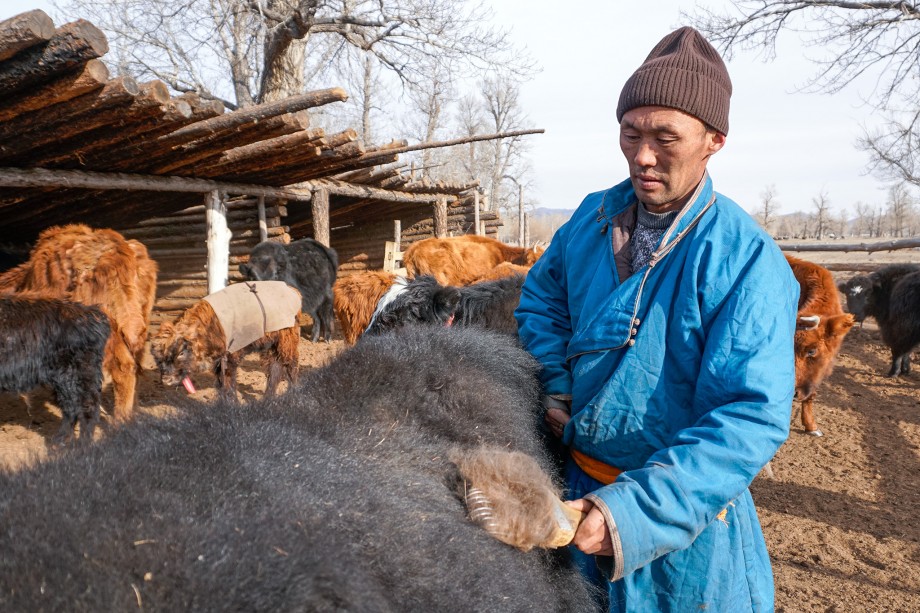 Dagiitserev Lkhagvasuren has been a herder for 40 years. It wasn’t until he joined the Ar Arvijin Delgerekh cooperative that he learned his yaks’ soft underfur had significant value.

The cooperative has been gaining momentum since it was founded in 2010. Today, all 225 members are herders who joined to receive training on how to tease and prepare yak wool fibers.

Bayarmagnai says they’ve trained herders to collect the fur by separating it from grass, dirt and the yak’s thicker outer hair. The valuable hair is the fine underfur, known as the pure fiber, which can be used to weave yarn and quality goods.

“When we initially established the cooperative, yak fiber was a raw material without any value,” Bayarmagnai says.

Today, herders throughout the province benefit from understanding the value of their yak’s fur.

“I had been herding livestock for 40 years but never teased yak fiber,” says Dagiitserev Lkhagvasuren, a local herder. He joined the cooperative in 2018. From his 27 yaks, he says, he was able to tease about 560,000 Mongolian tugriks’ ($202.50) worth of fiber.

The average annual household income here is about 14.8 million tugriks ($5,350).

“It really helps our livelihood and is especially beneficial for families like ours, who do not earn any salary,” Dagiitserev says. 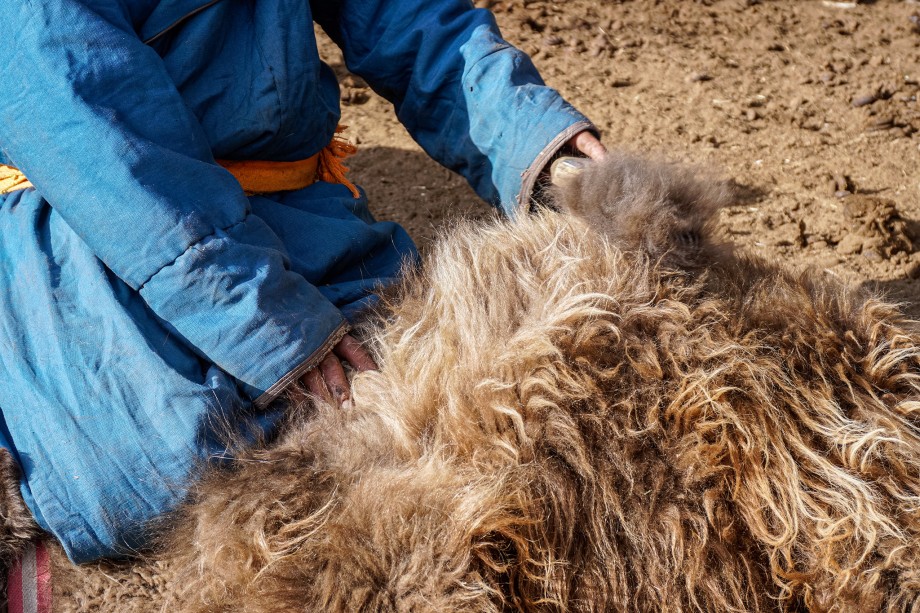 Herders who have been with the cooperative since it opened have seen tremendous increase in the demand for and value of their yaks’ wool.

Choisuren Namsraikhorol, a local herder, says when he started bringing wool to the collective, he earned about 1,500 tugriks (54 cents) for one kilogram (2.2 pounds) of wool. Today, he earns about 20,000 tugriks ($7.23) for the same amount.

The collective exports the pure fibers and makes yarn for local use, while also weaving yak wool products like shawls and clothing. Annually, they sell about 1,500 textile products at the collective’s retail outlet, Baby Yak, which opened in 2018.

Enkh-Amgalan Sumiyabat, a cooperative member who shows yak wool textiles at trade shows, says one question is more common than any other: “Is it cashmere?”

“Nobody knows that it is yak wool,” she says. “Our products are so cool and soft.”

“It is a luxury item, which is soft and can sustain warmth similar to goat cashmere,” he says. 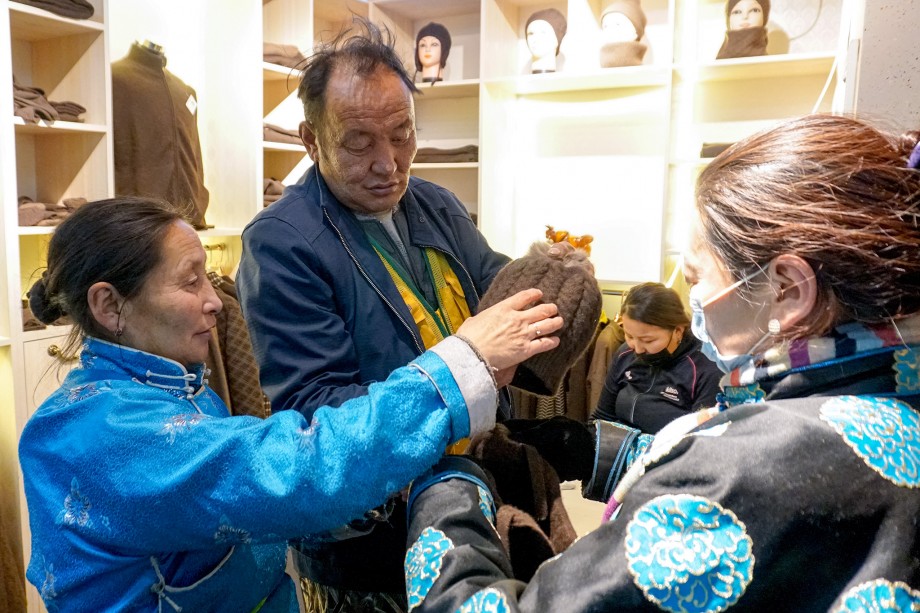 Customers shop at Baby Yak, where yak wool goods are popular for their softness and warmth.

Cashmere, the luxury wool made from fine goat hair, is popular and expensive thanks to the fact that it is extremely soft while being both warm and lightweight. There are three market grades of cashmere. Grade C cashmere, the lowest quality, can measure up to 30 microns, the standard unit used to grade wool. Grade B measures between 16 to 19 microns and Grade A, the finest, can measure as low as 13 microns.

The Mongolian University of Science and Technology and the accredited laboratory of the Mongolian Customs General Administration are responsible for testing the yak wool prior to export. On average, the yak fiber that the collective exports measures between 18 and 20 microns.

Local herders credit the cooperative with making a previously valueless material valuable, while creating a global market for Mongolian yak wool. The cooperative exports 1.4 tons of its washed and sorted yak wool to France, Spain, Italy, Japan and other countries annually.

Ganchimeg Gombojav, a regular customer at Baby Yak, says she likes to give the textiles to elders during the traditional Mongolian New Year holiday, Tsagaan Sar, in February.

“I like it because it is cheaper compared to cashmere and it is soft and warm,” she says.

Tsogtbaatar Jantsandorj, head of the Food and Agricultural Department’s Cattle Breed Section, agrees that yak wool products have been an asset to Mongolian markets.

“Today we are supplying something that previously had no value and blew on the market,” he says. “It is a very big advantage that people are now consuming domestically produced, eco-friendly animal products.”

Bayarmagnai says they are thrilled to see yak wool products take off locally and globally. He plans to add more looms and a larger factory space later this year. He says they will continue to work with herders and help them boost income, while creating internationally marketable products.

“Everything we make with our hands comes from our heart,” he says.

Correction: An earlier version of this caption misidentified the name of the source in the first image. Global Press Journal regrets the error.