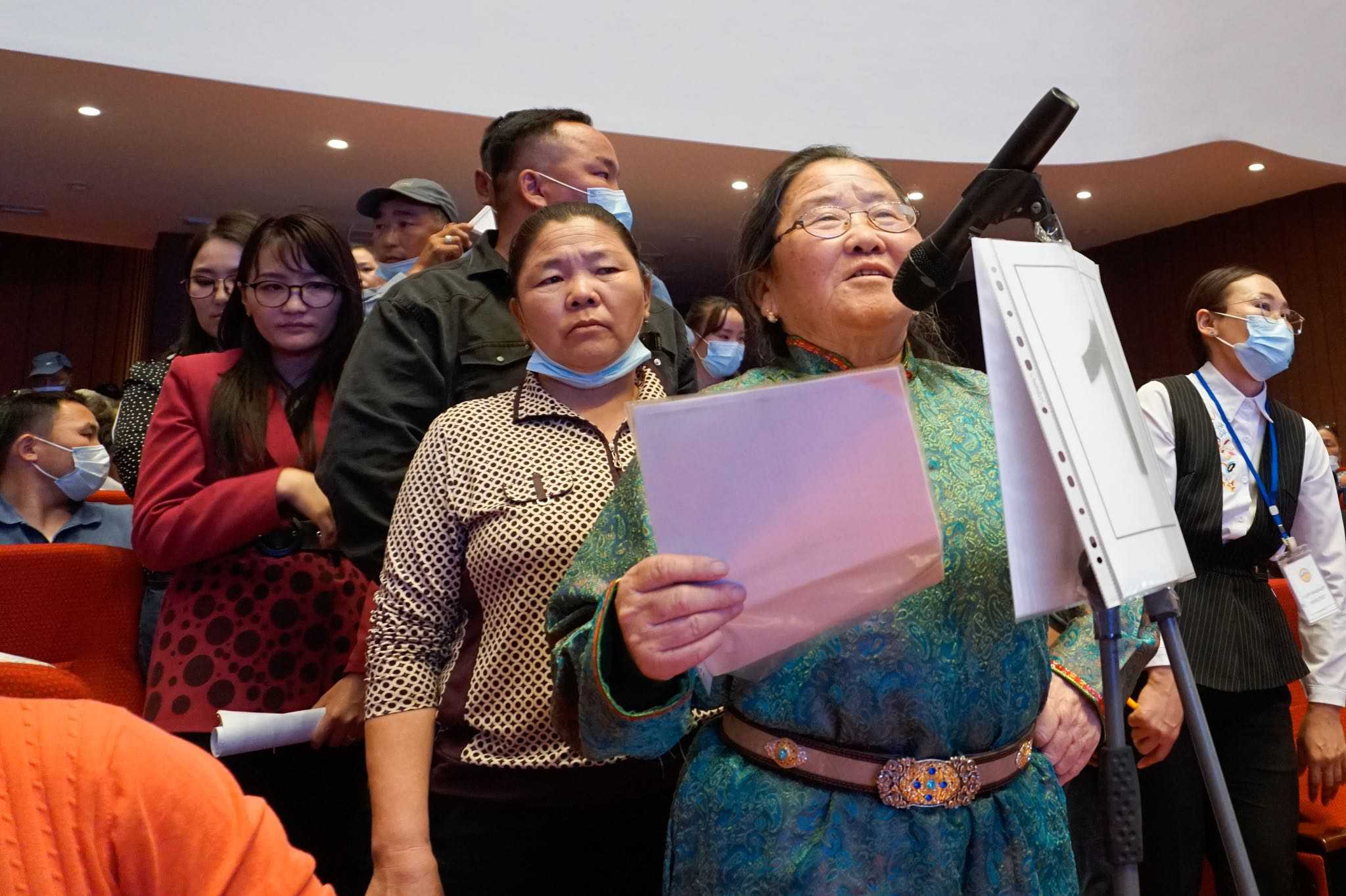 DALANZADGAD SOUM, UMNUGOVI PROVINCE, MONGOLIA — When Mongolian Prime Minister Oyun-Erdene Luvsannamsrai arrived at the Musical Drama Theatre (Хөгжимт жүжгийн театр) in Dalanzadgad soum to meet with local citizens in May, tensions ran high. Citizens had come to the meeting from all over Umnugovi, Mongolia’s southernmost province, armed with slogans and banners, some of which said: “We will never have our sandy Gobi back,” “Let’s leave our homeland to our next generation,” and “Mongolia with unbroken doors!”

Umnugovi residents had prepared for the meeting since 2019, when the central government approved the construction of two heavy-duty roads and a new border crossing with China in the south of the province for freightage of coal. The roads would cut through herding regions and pass very close to a national reserve in the Gobi desert region that enjoys strict environmental protection. Crucially, the new roads and border checkpoint would allow companies owning about 70 mining licenses to start operations in the province.

Years of activism against the construction of the Tsagaandel Uul-Ulzii checkpoint, as the whole project came to be known, culminated at that meeting in May. That day, the audience had a taste of victory: After witnessing its anger, Oyun-Erdene said he would suspend the projects, admitting that it had been “a mistake” to authorize it without citizen consultation. “Today … I decide to suspend [the project] at the next meeting of the government,” he said then.
But that verbal promise was never made official. Now, the Ministry of Economy and Development has revealed for the first time what herders have long suspected: The government is planning to go through with the Tsagaandel Uul-Ulzii checkpoint anyway. 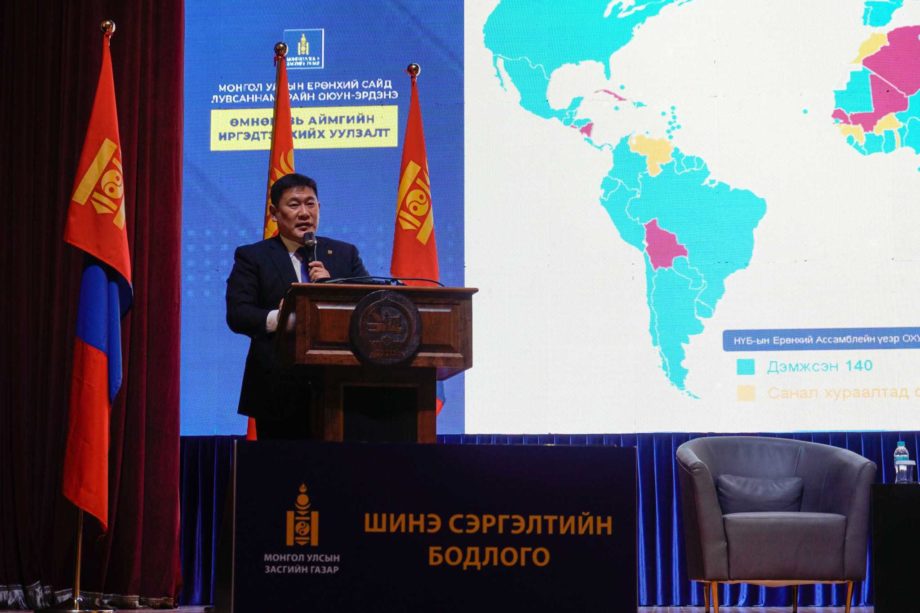 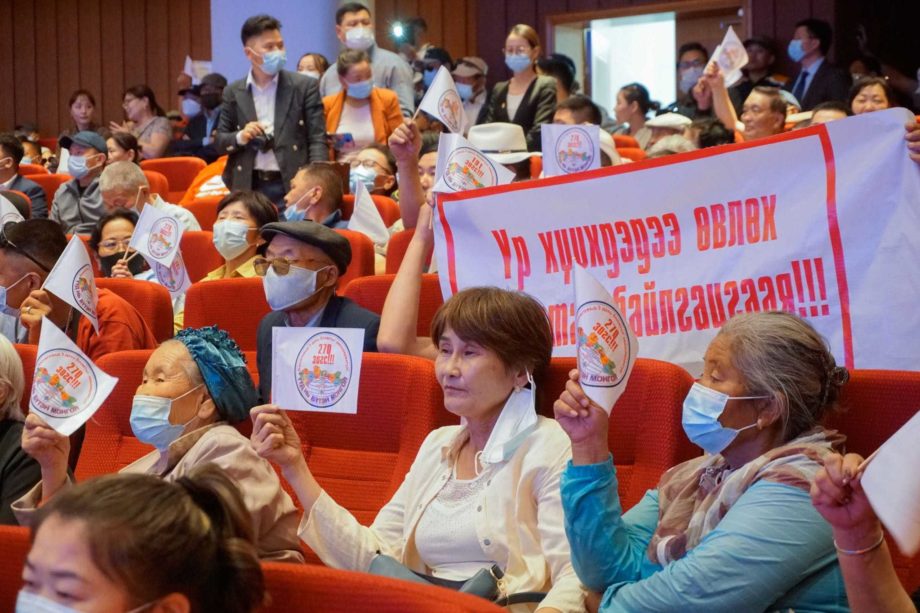 Mongolian Prime Minister Oyun-Erdene Luvsannamsrai addresses the public during a meeting in Dalanzadgad soum to discuss the Tsagaandel Uul-Ulzii checkpoint, a planned border crossing with China that many local citizens and activists oppose.

After the prime minister’s visit, a working group was established consisting of representatives from key ministries as well as heads of land departments and herder representatives from Khankhongor, Khurmen and Nomgon soums, says Erdenebulgan Khishigbayar, who oversees the modernization of border trade ports at the Ministry of Economy and Development. In late September, this working group attended a meeting of Umnugovi province’s Development Council, a multi-stakeholder advisory body to the provincial government, where the Tsagaandel Uul-Ulzii checkpoint project was discussed. “The ministries were of the position that since the government’s decision had been made … it is appropriate to continue its activities,” Erdenebulgan said.
Prime Minister Oyun-Erdene’s office did not reply to a request for comment for this story.
Umnugovi residents have known something was up since summer, when they discovered a large amount of construction material had been brought across the border from China to Tsagaandel Uul-Ulzii. “When we went to the border port in July, there was one container. On Aug. 6 … we went to check it ourselves, and a lot of cargo had arrived,” says Undarmaa Tsetsegmaa, a herder from Khurmen soum who on that occasion took photos of the material with her mobile phone.
Enkhtsetseg Batbuyan, a herder who lives 17 kilometers (11 miles) from the border, also noted the construction materials’ appearance. “When I heard that the prime minister would suspend the work of the border port, I became hopeful. Now that they are doing it secretly, I have no trust,” she says. “There is no scarcity of border ports in Umnugovi province. We are not stingy with its wealth. It is flowing out of the country to the south day and night.”
The struggle over the Tsagaandel Uul-Ulzii border crossing illustrates Mongolia’s challenges in balancing protection for herders’ livelihoods and ecosystems with an economy heavily dependent on mining. 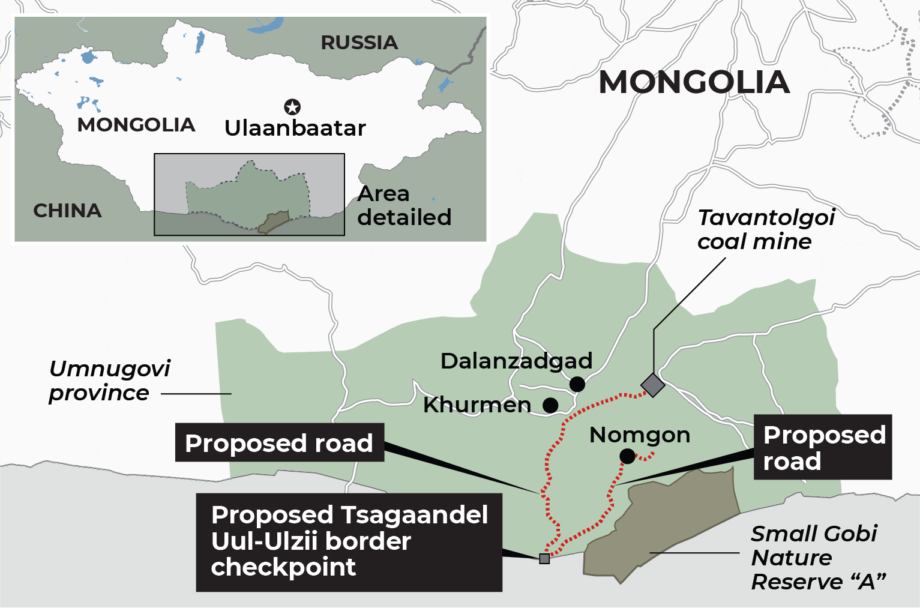 Mining represents a quarter of Mongolia’s gross domestic product and in 2020 made up 90% of its exports. China was the destination for 98% of Mongolia’s mineral exports. All this wealth flows south through 13 border checkpoints between the two countries, two of which are in Umnugovi province, which shares an 800-kilometer (497-mile) border with China.
The coal-rich Umnugovi province is located in the Gobi, a fragile ecological region with several protected areas, including the Small Gobi Nature Reserve. The Gobi desert region is home to 33 rare and endangered animal species, including the so-called “Great Gobi 6” — the wild camel, takhi (wild horse), khulan (wild donkey), goitered gazelle, saiga antelope and Gobi bear — which are found only in the Gobi.

A 2014 study by The Nature Conservancy, a United States-based environmental organization, in collaboration with the Mongolian government, defined the southern Gobi region as “the place least affected by humans on Earth.”

The two roads envisioned by this project would cut through the Gobi. They would connect the Tsagaantolgoi coal mine and the Tavantolgoi West Naran Road to the border checkpoint.

Once these roads and the border crossing are operational, mining licenses in the area would be activated and exploration activities would intensify, Erdenebulgan confirms. “However, exploration work will increase the number of jobs, foreign investments and taxes that will be concentrated in the national and local budgets,” he says. 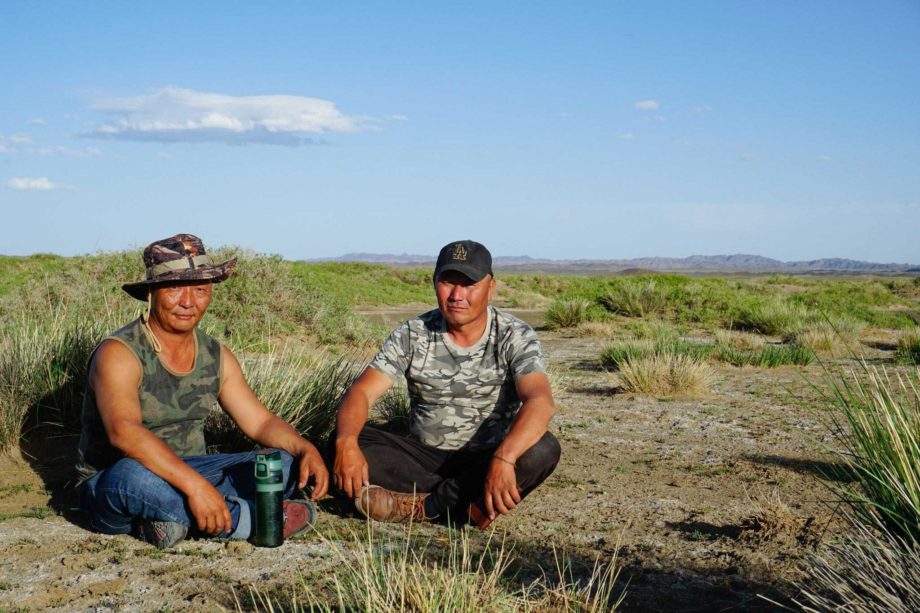 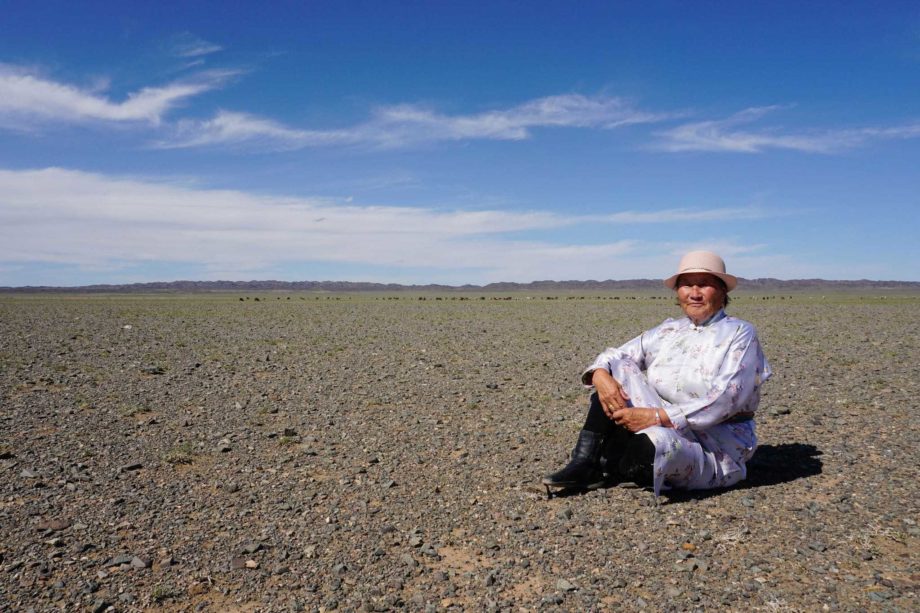 Herders Gerelt-Od Ayurzana, left, and Otgontugs Tudev sit for a portrait in Nomgon soum, while herder and activist Tuya Bumbur poses at Khurmen soum. All three herders live in areas that will be impacted by planned roads and a border crossing with China, construction projects they have opposed for the past four years.

The official admits that government decisions in Mongolia fall short of citizen participation. “Misunderstandings arise because citizens are not given a proper understanding of the environmental, economic and social effects and benefits, and how it will affect the lives of herders,” he says.
He adds that environmental impact and citizens’ concerns will be taken into account at the next meeting of the Umnugovi Development Council, but says a date hasn’t yet been set.
As for the construction material seen by the herders, Erdenebulgan confirms it was brought from China, as it had already been purchased, and that transportation was possible because both countries had agreed on a temporary border crossing that would be open between the 15th and 25th every month.
Tumendelger Khumbaa, head of the Amazing Gobi Tourism Association, laments that plans for the road might have begun back in 2009 as a tourism project. “It was initially discussed that this checkpoint would become a major tourism hub,” he says, recalling a meeting with Chinese and Mongolian delegates held that year. “This road would enable tourists to see Burkhan Khaldun Mountain and then visit Manchuria,” he said, referring to the historical region of northeastern China.
Somewhere along the way, he says, it was converted into a mining project.
Batsuren Tsagaanduu, a transport driver and resident of Nomgon soum, says the checkpoint could have switched purposes in 2010, when Mongolia suffered a harsh winter and China temporarily opened the Tsagaandel Uul-Ulzii checkpoint for 10 days to provide herders with hay and feed. By doing so, the Chinese hired Mongolian drivers, who by driving through sand effectively created a new road, recalls Batsuren. “At that time, a new paved road from Tavantolgoi mining to the Tsagaandel Uul-Ulzii checkpoint was approved based on the [makeshift] road through which we transported hay and feed, without even a single meter of difference,” he says. 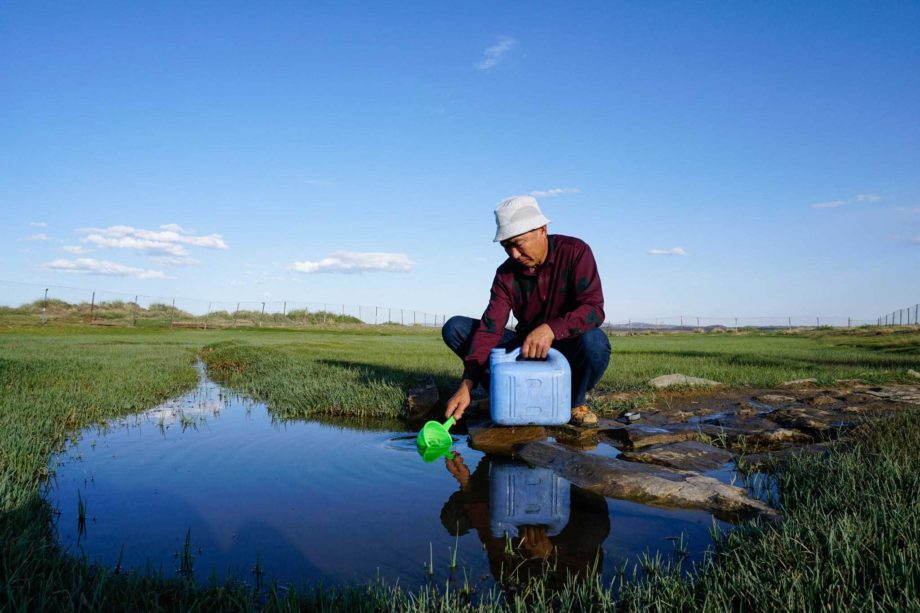 Batsuren Tsagaanduu collects water from the Sangiin dalai spring in Nomgon soum, Mongolia. The region will be impacted by a planned road connecting a coal mine to a new border checkpoint with China.

“The soil of the Gobi is easily destroyed within two to three days of a storm. If thousands of cars pass back and forth, nothing will be left for cattle to eat. It will be impossible to herd cattle then,” says Tuya Bumbur, a herder from Khurmen soum who lives along the future 270-kilometer (168-mile) road.

Herders like Tuya and Batsuren have been at the forefront of organizing against the project for the past four years. Otgontugs Tudev, another herder who represents local citizens of Khurmen soum, tells of a winter night with a snowstorm and raging winds when he received a phone call informing him of heavy trucks on the road near Jargalant bagh of Khankhongor soum toward the Tsagaandel Uul-Ulzii checkpoint. Despite the frosty night, he put on his winter deel lined with fur, crammed 10 people in his car, and drove fast to stop the trucks on their way.

“Since big, heavy trucks usually drive to the checkpoint after 2 a.m. at night, we have lived in a semi-militarized mode for the past four years,” he says. “We used to sleep fully prepared to grab our car keys and turn on the engine of the car, while lying in bed with our outdoor clothes.”

In April, he says he and other herdsmen stopped about 30 vehicles that were driving toward the checkpoint and managed to keep them at a standstill for three days. It cost them. “Since we could not care for our cattle and guard our livestock yards at night, all the offspring born that time froze to death,” he says.

“If our struggle does not succeed and the checkpoint is opened despite our efforts, it will be dangerous that Mongolia would become a mining region of China,” Batsuren adds.

He says he will keep protesting. “Is there any cement more valuable than native nature and the ecosystem of our country?”, Batsuren asks, angrily. “I will fight to my last breath until they cancel the decision completely.”

Uranchimeg Tsoghuu is a Global Press Journal reporter based in Mongolia.