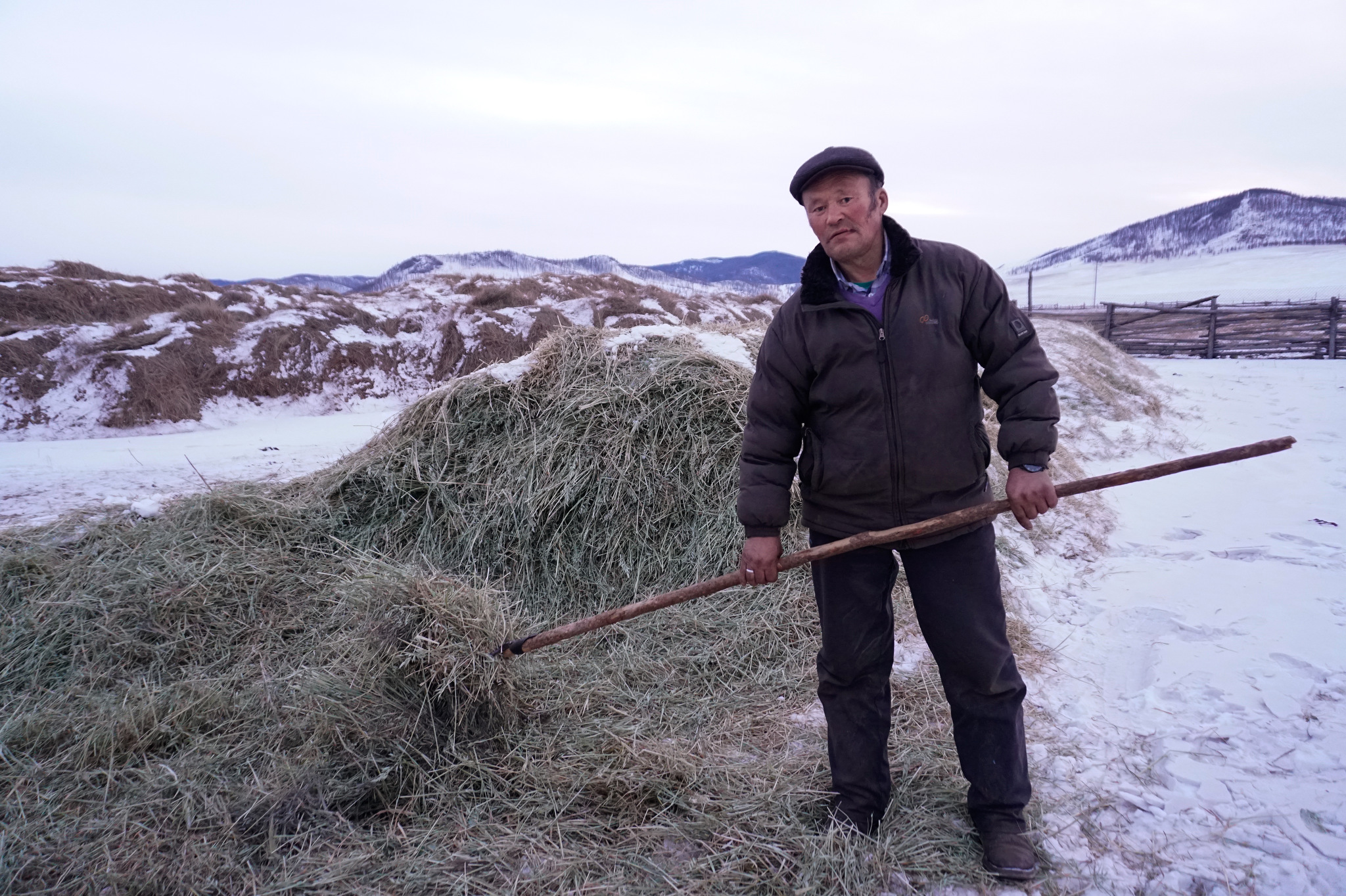 Rows of fledgling crops sway inside a fenced-in part of the steppe. From a distance, they look like rippling rivulets. In winter, once natural pasture has been depleted — overgrazed, in fact, by the country’s burgeoning livestock population — this cultivated fodder will prove crucial for Mongolian herders. Spanning roughly 110 million hectares (271.8 million acres), the Mongolian steppe is one of the largest remaining grassland ecosystems in the world, but it’s struggling to sustain itself — and the rising numbers of goats, sheep, cattle, camels and horses that subsist on it.

“Without green feed, it is quite challenging to endure the winter successfully,” says Altangerel Zundui, a herder in Ikhtamir soum, in the central province of Arkhangai. Home to 1,100 herder families and 370,000 heads of livestock, the grasslands of Ikhtamir have been especially hard-hit by overgrazing, a phenomenon compounded by an infestation of underground rodents that feed on the roots of plants.

Livestock accounts for more than 10% of the national gross domestic product and the industry employs 23% of the labor force. Animal numbers exploded in Mongolia in the wake of economic liberalization in the 1990s. When the country was under Soviet control, they were limited to around 25 million. Subsequent lack of regulation means that today that number has nearly tripled, to about 67 million. This, alongside decreased rainfall and a decline in traditional rotational grazing practices, has overburdened the country’s grasslands, herders and researchers note. 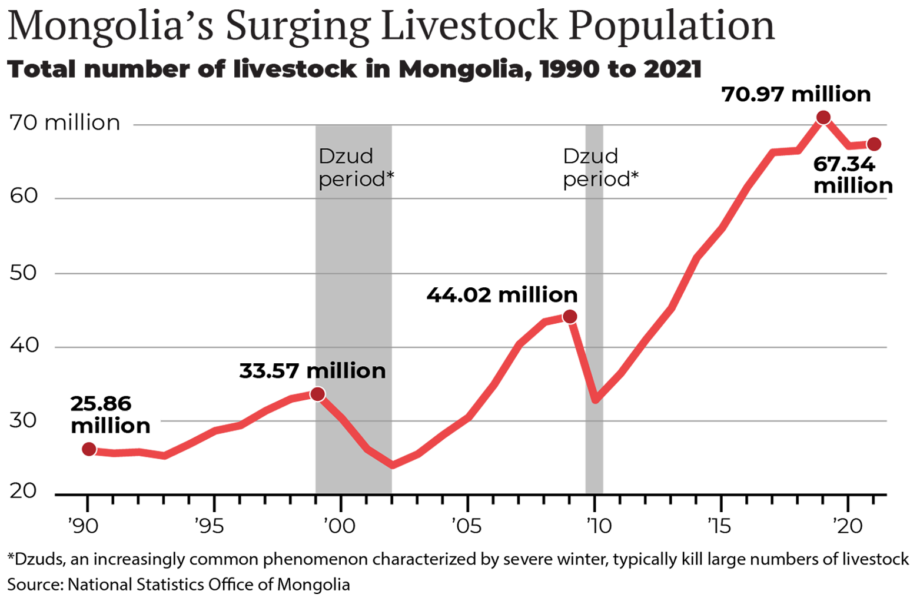 Estimates of degradation vary widely — from 22% to 95% — but, according to the most recent official assessment, 57% of Mongolian rangeland is altered from its optimal state. Over a third of the land now has too many animals grazing on it. In a 2018 government survey of herders, more than 90% of respondents pointed to limited pasture as a challenge.

Since overgrazing has already begun affecting their way of life, herders like Altangerel have taken to growing their own feed.

Land is for communal use, so herders must first seek permission from the government and from citizens’ representatives before growing crops on it. Khandjav Tsamba, another herder in Ikhtamir soum, says she plows her field at a cost of 2 million Mongolian togrogs ($620) each spring and harvests 5 million togrogs ($1,550) worth of fodder in the fall. “Many herders now grow green fodder, which is very supportive for their livelihood,” she says.

Herders also plant vegetables, says Nerguibaatar Luvsantseren, head of Arvijin Saijrakh, a local nongovernmental organization. About 70 households in Ikhtamir have improved their standards of living through farming, he adds.

Farming doesn’t always come easily to herders, especially as the weather becomes more erratic. Altangerel, for instance, describes previous harvests when sudden snowfall blanketed his crop, leaving it wet and limp. But Nerguibaatar is more bullish about the turn to agriculture. “Herders were thought to only be herders, but now they are also farmers,” he says. “Our attempts to save our pastures are themselves becoming a source of income.” 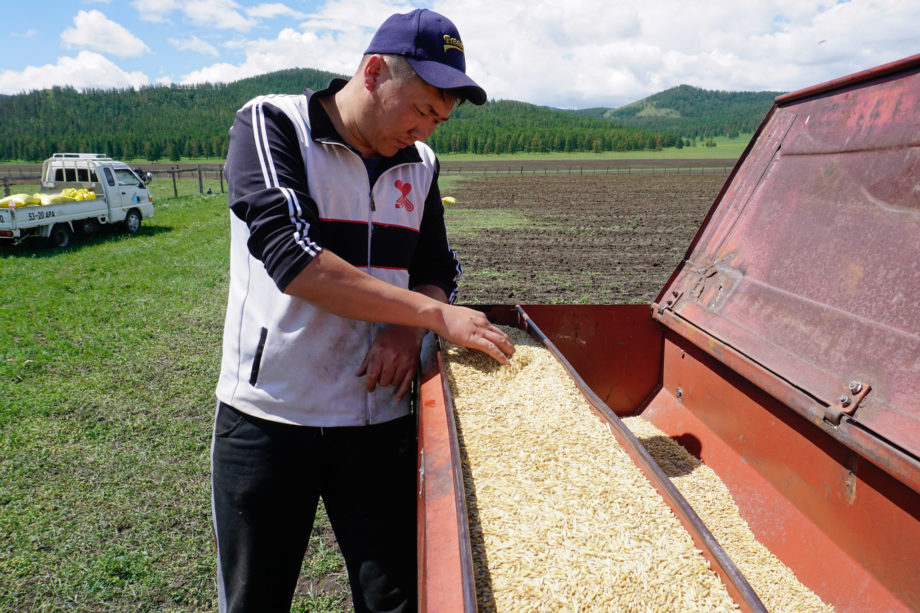 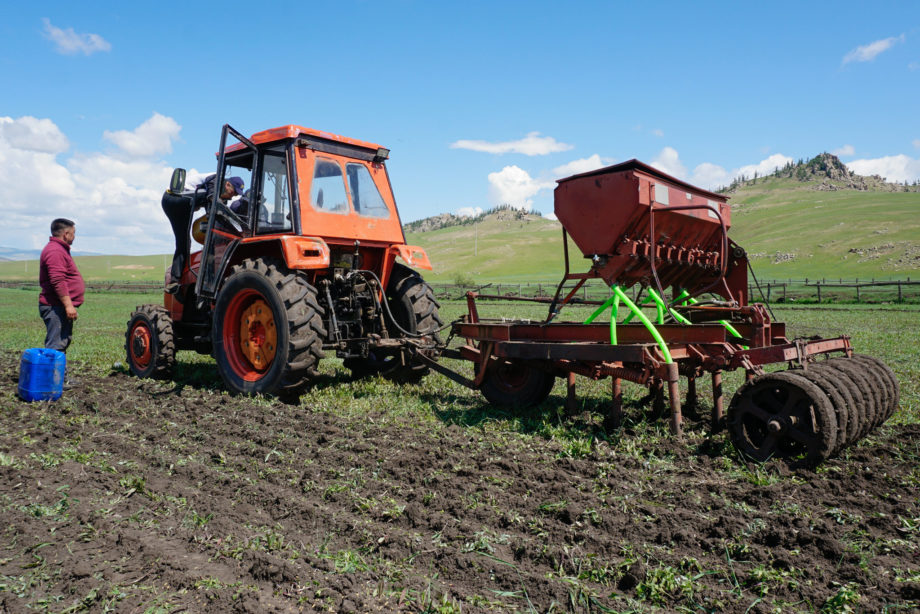 Many herders in recent years have begun cultivating fodder to ease pressure on Mongolian grasslands.

Herders are also working together to reinstitute traditional grazing practices. In the past, Altangerel and his family didn’t move from pasture to pasture, but only moved between their summer and winter camps. In the dead of winter, their animals would stray into other camps in search of pasture. Fights would erupt; misunderstandings would fester. Now, however, more and more herders are forming pasture groups to use grasslands in a way that is equitable and sustainable — to avoid what economists call “the tragedy of the commons.”

“Pastureland is state property and the quality of any government property utilized for free should be preserved and enhanced,” says Bulgamaa Densambuu, a specialist for the Green Gold project, a recently concluded initiative helmed by the Swiss Agency for Development and Cooperation that helped form pasture user groups in 18 of Mongolia’s 21 provinces.

Since 2017, herders also participated in Green Gold’s Responsible Nomads initiative, an electronic tracking system that incentivizes them to pay attention to pasture condition, animal health and other sustainability measures. “Herders need to be held responsible,” Bulgamaa says. In the 18 years since the Green Gold project was first rolled out, she says, collective management has prevented the degradation of 20 million hectares (49 million acres) of Mongolian pasture. Another 5 million hectares (12 million acres) have been restored to their original state.

The capacity of Mongolian grasslands to recover from overgrazing is “relatively good,” says Batdorj Tolya, head of a provincial association of pasture user groups. “But this is not possible without limiting livestock growth.” 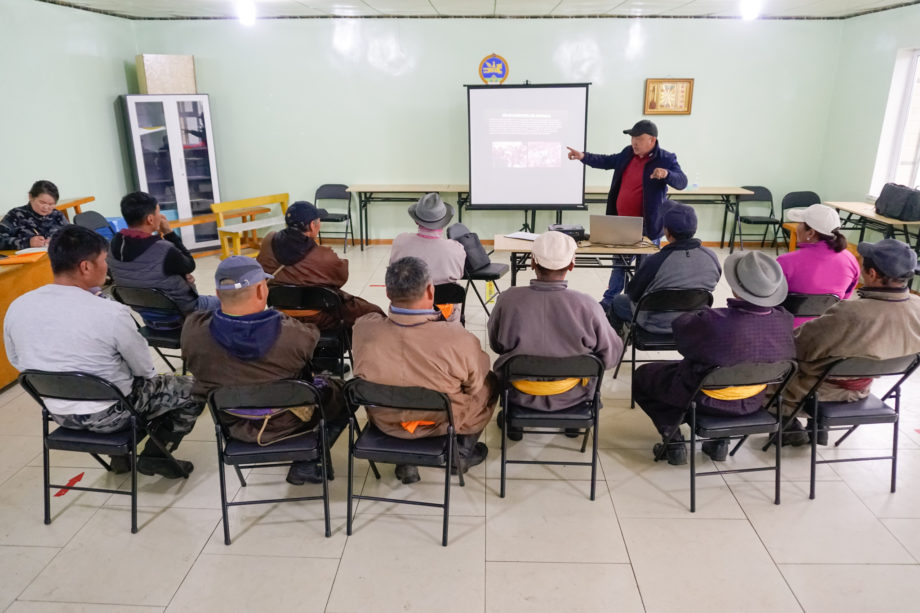 Livestock numbers are so high that there is just no opportunity for the land to rest. According to a 2014 report by the Asian Development Bank, peak pasture growth is 75% of what it was 40 years ago and there are fewer highly nutritious plants. These changes affect livestock quality. Between 1980 and 2000, for example, the average weight of sheep decreased by 4 kilograms (8 pounds), goats by 2 kilograms (4 pounds) and cattle by 10 kilograms (22 pounds). This, in turn, affects herders’ livelihoods, leading them to increase herd sizes to maintain their income and creating a vicious cycle of overgrazing.

The changing composition of the national herd is another factor. In the aftermath of dzuds, an increasingly frequent extreme-weather phenomenon, herders have tended to replace lost livestock with smaller and more affordable animals, such as goats, rather than yaks, camels and cows. The proportion of goats — preferred also because they produce cashmere, a lucrative byproduct — increased from 20% in 1990 to 44% in 2006. The problem? Goats graze by pulling plants out of the ground rather than biting off leaves, impacting the ability of a pasture to grow back.

As herders work together to formulate pasture-sharing agreements, return to the centuries-old nomadic practice of migrating each season, and supplement pasture with cultivated feed, the government is also taking steps to deter further livestock growth, says Munkhnasan Tsevegmed, in charge of pasture protection at the Ministry of Food, Agriculture and Light Industry. In the past, herders who raised more than a thousand animals were heralded as national champions. Now, as of 2021, the Mongolian government has instituted a livestock tax of up to 2,000 togrogs (62 cents) per animal — with at least 80% of the collected revenue to be used for pasture maintenance, says Munkhnasan.

In recognition, perhaps, that the crisis at hand may be too large to tackle individually, 85% of Mongolian herders approve of the new tax.