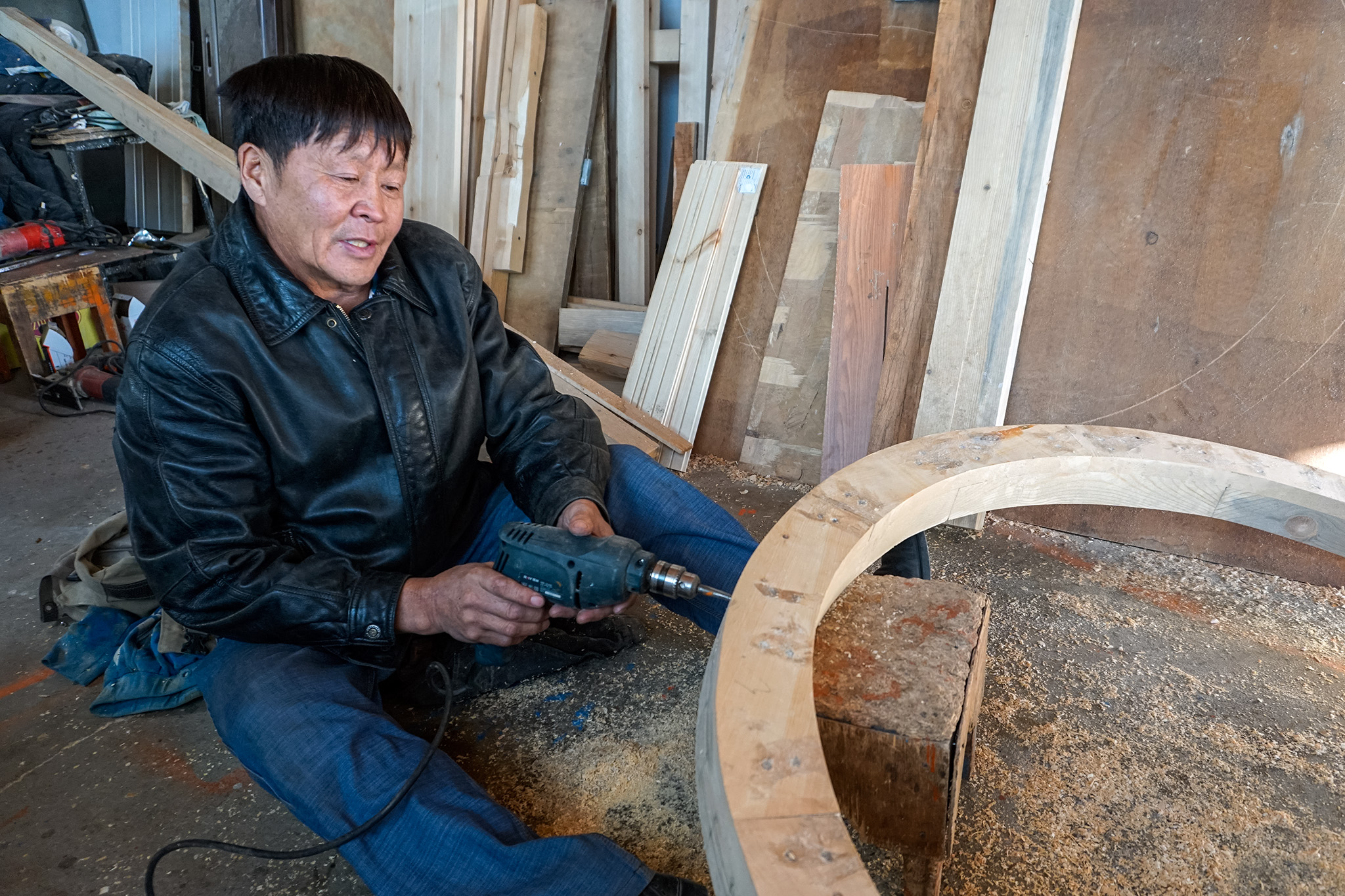 DALANZADGAD, UMNUGOVI PROVINCE, MONGOLIA — Enkhbat Dashjamts, 58, works amid tools and wooden boards. Electric drills whirr and hammers bang as he and others build a toono, or the upper frame of a traditional Mongolian house.

It’s not an unusual project. But the men at work today have a unique past. All, including Enkhbat, are recovering alcoholics.

Mongolia has the largest population of alcoholics in the world. According to a World Health Organization study, Mongolians are dependent on alcohol at a rate three times higher than Europeans.

While the stereotype of the alcoholic Mongolian is common, what’s less common is an understanding of how ordinary people, like Enkhbat, are finding solutions to the epidemic.

Enkhbat says he lost his job and his family after drinking vodka for 30 years. He says he used to borrow money to buy the liquor and estimates that he drank a million Mongolian tugriks’ ($360) worth of vodka on credit.

“I hit the bottom,” he says of his life before 2014. “I was stuck in the mud, living on the street, and peeing in my pants. I spent all of my money on vodka instead of spending it on my own children.”

He says he began to get sober in 2014. He took a bold step and requested a meeting with the governor of Umnugovi province. In that meeting, he says, they discussed the challenges of alcoholism and employment for men in the area.

Then, he shared his big idea: He wanted to start a carpentry workshop affiliated with his local church, which would offer jobs to alcoholics and help them recover from addiction. He told the governor that there were many men in the community who, like him, wanted to get sober but didn’t have the money or the support to do so.

To his surprise, he says, the governor eventually agreed to help. And by 2015 he had successfully founded the nongovernmental organization Munkhiin Gegeen Amidral, which means “eternally bright life.”

With the help of citizens, provincial governments across Mongolia are continually implementing a variety of campaigns and programs to reduce the incidence of alcoholism.

In 2009, Umnugovi province banned the sale of alcoholic beverages on Wednesdays. In 2013, Alcoholics Anonymous started holding meetings in the province. And in 2017, 100 million tugriks ($36,138) was allocated to a three-year alcohol prevention program.

New initiatives to curb and prevent alcoholism continue, especially in the wake of precautions surrounding the new coronavirus.

Umnugovi province’s police department organized a campaign against alcoholism called “No!” that launched in February, just days after the country closed its border with China, shutdown schools and suspended public transportation. Organizations and local authorities increased online advertising and public discussions about alcoholism. The campaign is performing especially well on Facebook, with many Mongolians changing their profile photos to the “No!” logo. The governor of Umnugovi province also banned the sale and serving of alcohol from March 10 through April 1 to prevent the virus from spreading.

Even before these latest efforts, the results in this province were promising.

According to an official study from 2018 on the state of alcohol consumption in Mongolia, the number of people treated for alcohol-related issues in Umnugovi province decreased by five times between 2013 and 2018.

Nearly six years after its founding, Enkhbat says, his organization has faced both successes and challenges.

The organization has worked with more than 300 local people, providing many with jobs and support. But some fall back to alcohol.

“There are people who can recover from alcoholism and those who cannot,” he says.

Nyambuu Ishgombo was an alcoholic for years. Today, he works with Enkhbat at the carpentry workshop.

“I sold most of what we had at home at such a cheap price to buy vodka,” he says. “I caused a lot of suffering for my wife.”

Nyambuu works closely with Enkhbat to recruit other men to join them at the workshop.

“Yesterday, we went to see two of our friends,” Nyambuu says. “Now we see that they are not drinking and instead they are boiling two sheep heads for a meal surrounded by their children and they feel quite content.”

Usukhjargal Luvsannyam, a psychiatrist at Umnugovi province’s Regional Diagnosis and Treatment Center, says programs like these are proving worthwhile.

“In terms of group therapy, people view that a voluntary treatment group such as an Alcoholics Anonymous gathering is effective,” Usukhjargal says. “It is fully possible that citizens can join the meetings and abstain from alcohol for a lifetime.”