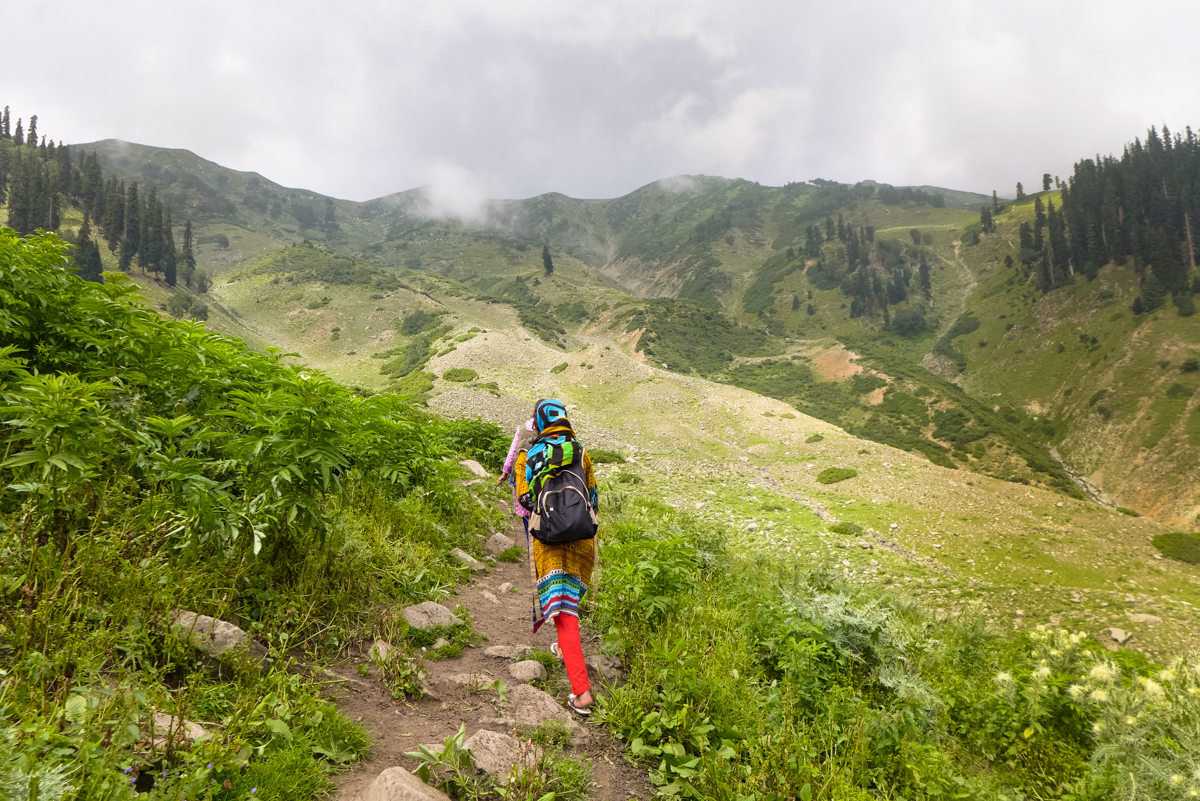 TANGMARG, INDIAN-ADMINISTERED KASHMIR — Akhtar, 24, hurries to pack an ax and a trowel into her bag. It’s 6 a.m. when she slings the bag over her shoulder and tells her friends, all of whom live in her village, to hurry up.

The group has to reach the area around the town of Gulmarg, near Affarwat Peak, to gather medicinal plants. That’s about 21 kilometers (13 miles) away. Akhtar, who asked to use only her second name to protect her identity, expects the walk will take four or five hours.

“My whole body has been experiencing pain since I started to get the medicinal plants from the mountains,” she says.

Akhtar does it, she says, for the money. She sells the plants she gathers to smugglers who move them to China, Japan and other countries where Kashmir’s rare flora species are in demand.

After walking nearly 4½ hours, Akhtar and her friends reach the peak. They’re excited and happy, and by the time they see the slope where they plan to collect the plants, their exhaustion is gone.

Akhtar spots a plant – tripater, also known as Trillium – and begins to dig around its root. Fifteen minutes later, the plant is extracted from the ground.

The Kashmir Valley is a veritable paradise for plants that can be used for medicine and cultural practices around the world, but experts fear that relentless smuggling will make them extinct before they can be catalogued and researched. The extraction and sale of the medicinal plants is banned by Indian law, but for villagers such as Akhtar who extract the plants, joining the smuggling hierarchy guarantees income in the summer months.

If the plants continue to be overexploited, a time will come when we will only read about them in books. Anzar A. Khuroo, senior assistant professor, Department of Botany, University of Kashmir

The state government is considering whether to allow the extraction of certain plants so the process can be supervised and the export of those plants can be a viable business.

Many of the medicinal plants smuggled from Kashmir Valley are protected under the Jammu and Kashmir Forest Act, says Anzar A. Khuroo, senior assistant professor in the Department of Botany at the University of Kashmir. Khuroo has done extensive research on plants in Indian-administered Kashmir, including the region’s endangered species.

The plants have medicinal value and have traditionally been used by local healers for treatment, he says.

“Due to the effective medical properties of these plants, the demand is high in the national and international markets,” Khuroo says.

Tripatar, for example, is used as a steroid for sexual disorders, he says. Kuth is used for the treatment of stomach ulcers, he says.

China and Japan are the two foreign countries where the dried medicinal herbs are commonly smuggled, Khuroo says. Within India, the highest demand is from Chandigarh union territory, in the northern part of the country.

That demand keeps smugglers in business. One man, who asked not to be named, has been smuggling plants for 20 years. Poverty drew him into it, he says. He remembers days when his family had no food on the table for dinner.

“I was 25 when I got into this business,” he says. “Initially, I used to get these plants myself from the forests and sell it to the smugglers.”

But within a few years, the man, now 45, saw that he could avoid collecting the plants himself if he became a smuggler. Now, he’s a wealthy man with a large home and several properties.

He has a network of nearly 40 regular suppliers who know where to find medicinal plants, he says. Among them is Akhtar, the woman who hikes to Affarwat Peak. 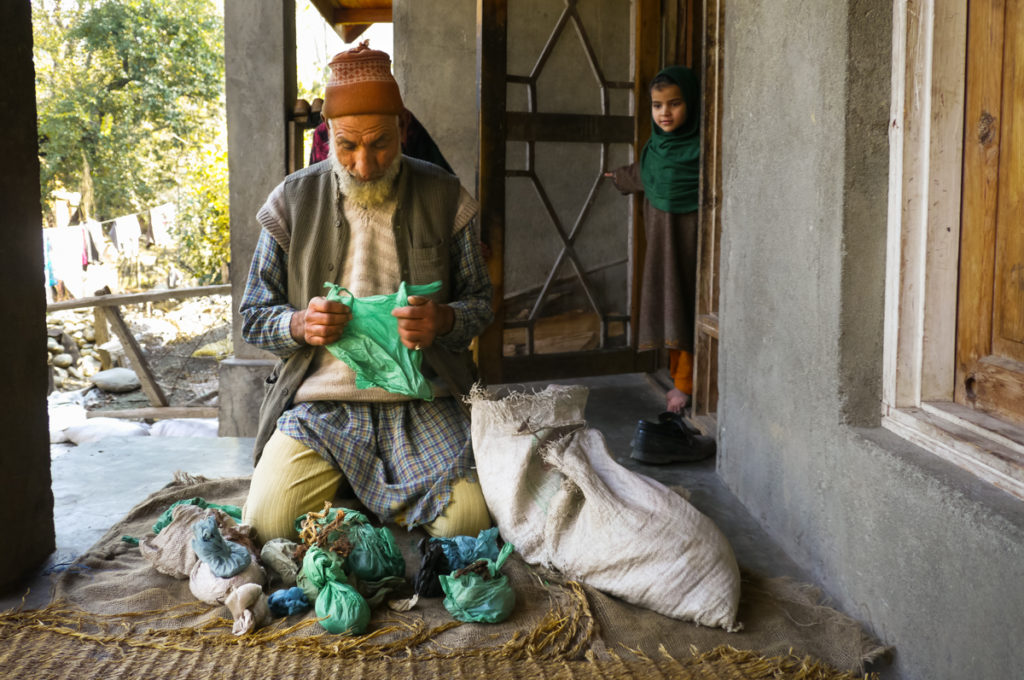 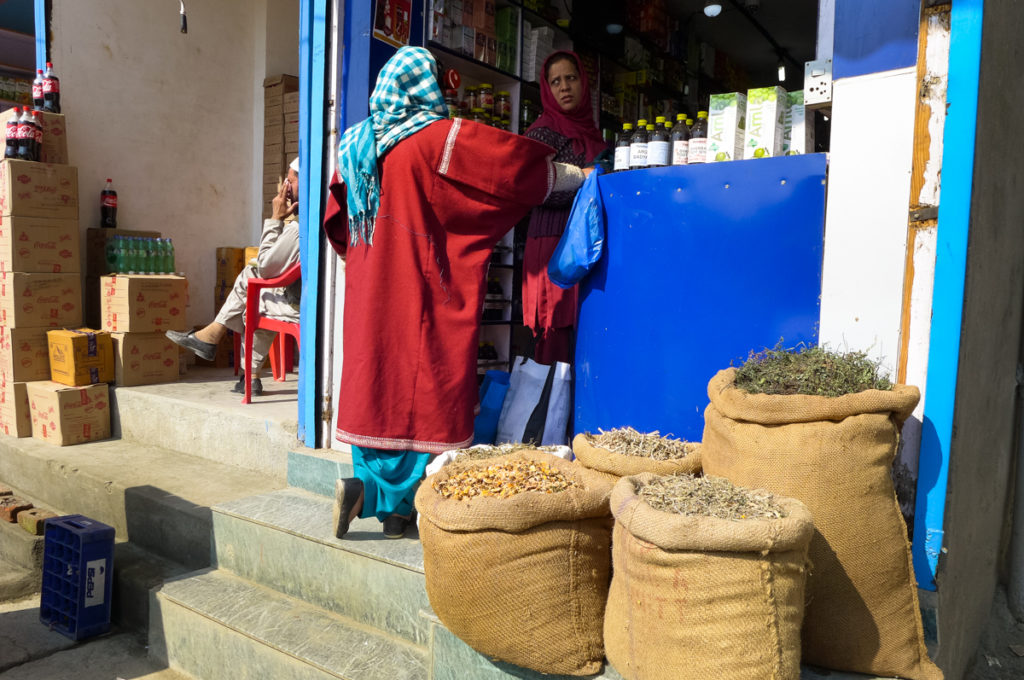 Plants that grow wild in the Kashmir Valley are in high demand both in that region and in other countries. Many people in the valley prefer the plants over western medicine because, they say, the plants don’t have side effects, and have been used successfully for generations. 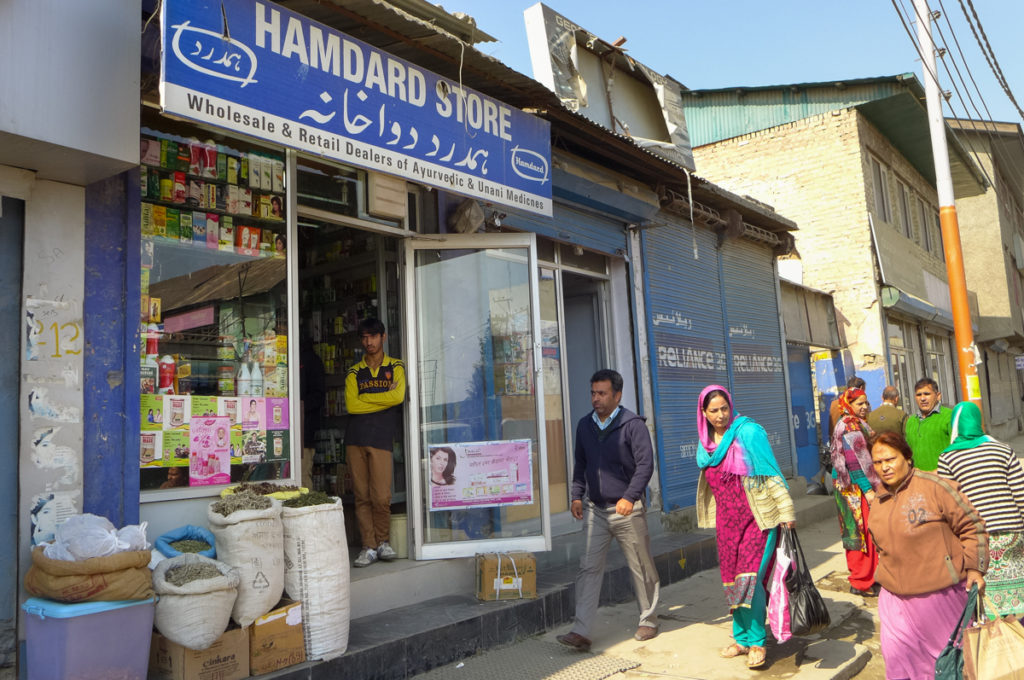 Many shops in Kashmir sell the plants as medicine. They are packaged whole or ground.

Akhtar lives in the Tangmarg area, in a village surrounded by forests. Nearly half the families who live in her village collect plants for the smugglers, she says. Her mother also used to collect plants but stopped because the work was too arduous.

“I always fear getting caught by the forest-protection people,” she says. “I am a girl, and if I ever get caught, my reputation and family reputation will be shattered. What if no one marries me then?”

Akhtar studied in the village school until third grade and dropped out because her family could not afford to send her to school. There have been no other opportunities to learn a trade or other vocation in her village, she says.

The smuggler says he’s careful to protect his suppliers.

“I know my suppliers, and sometimes I go to their home directly to collect the plants, and other times we have a few chosen spots where we meet,” he says. “I negotiate the price with them and give them money right away. It has been a long association with them, so they know the working of the trade.”

His main buyers are in Chandigarh union territory, Maharashtra state and the city of Kolkata, he says. The buyers purchase the herbs via a middleman.

During the harvest season, from May to November, he collects dried herbs from suppliers and arranges for them to be smuggled out of Kashmir, usually hidden in trucks carrying fresh produce. He limits the shipments to once a month, as he finds it too risky to smuggle the herbs more frequently.

He says he is part of a chain of smugglers in Kashmir from the Kupwara and Budgam districts and Gulmarg.

Local suppliers such as Akhtar get a pittance compared with the international sale price of the herbs, Khuroo says.

“The revenue which is generated from these medicinal plants goes outside the state,” Khuroo says. “The locals do not benefit from it.”

Nisar Ahmad Darzi, chief conservator of forests, Kashmir, of the Jammu and Kashmir Forest Department, says the state is losing a valuable resource, but no one has calculated the monetary loss because the smuggling takes place in secret. He calls the smuggling “theft.”

I am a girl, and if I ever get caught, my reputation and family reputation will be shattered. What if no one marries me then?Akhtar, 24

Hundreds of medicinal plants, yielding high-quality ingredients used in medicines, aromatherapy and cosmetics, are present in Indian-administered Kashmir, he says. Many of those plants are endangered, but exact numbers aren’t known because there hasn’t been much research on them, he says.

When plant collectors extract the whole plant with its roots, the plant doesn’t regenerate and eventually becomes extinct, Khuroo says.

“If the plants continue to be overexploited, a time will come when we will only read about them in books,” he says.

The smuggling has also created problems for local healers, who can’t find the plants for their medicinal potions and balms made from local herbs.

Gaffar Sheikh, who has been working as a local healer for nearly 35 years in the Tangmarg area, says his work has suffered because of the smuggling business.

“Now I don’t get these plants, which I used to get easily before,” he says.

In the past, he says, he often used patris and kuth to treat stomach ulcers, joint pains, weight loss, asthma and diabetes.

He is losing customers because he can’t make the herbal medicines anymore, Sheikh says.

“I used to have a huge number of patients before, who used to come for treatment,” he says. “But now I hardly have anyone.”

Even when the plants are available, they are too expensive for him, Sheikh says.

“I am old now and cannot go myself to get these plants, and the locals who get them ask for a huge amount, which I cannot afford,” he says.

The Kashmir Valley is a veritable paradise for plants that can be used for medicine and cultural practices around the world, but experts fear that relentless smuggling will make them extinct before they can be catalogued and researched.

Khuroo says the Kashmir government could step in to develop an herbal industry, which would create legal jobs.

“If the plants are manufactured into medicines in Kashmir, it will help in the economic upliftment,” he says. “The revenue will go to the state rather than going outside.”

The trade in herbal plants is an unorganized and unregulated sector, Khuroo says. The state can play a vital role in making it more organized and establishing regulations to monitor plant extraction and use.

The government is working to regulate the sector, Darzi says. It hopes to introduce a procedure for the legal extraction of medicinal plants from the forest, he says. The government hopes that legal, regulated extraction will put a stop to the illegal sale and smuggling of the plants, he says.

But in the meantime, it’s almost impossible to stop the illegal extraction of plants, says Ghulam Qadir Dar, a forest range officer with the Jammu and Kashmir Forest Department, who works in the Tangmarg area.

Villagers are allowed to gather firewood and herbs for their cooking and home medicines, he says.

“The smugglers send local men and women to the forest to get these plants,” he says. “It becomes very difficult for us to identify these people because many people go to the forests to get various things. We cannot check them all.”

Darzi says the government plans to introduce a pilot project to allow villagers to benefit from the legal sale of medicinal plants. He hopes the project will be authorized in the current fiscal year.

“We want the returns to go to the public,” he says. “We have to ensure the involvement of public so that the theft is no more.”

Akhtar says she plans to continue gathering plants for the illegal trade until she saves enough money for her wedding – an event that isn’t yet planned but that she knows her parents won’t be able to afford once the time comes.

“I hope soon I will have enough to get married,” Akhtar says. “I do not love to do this, but it is something I have to do.”