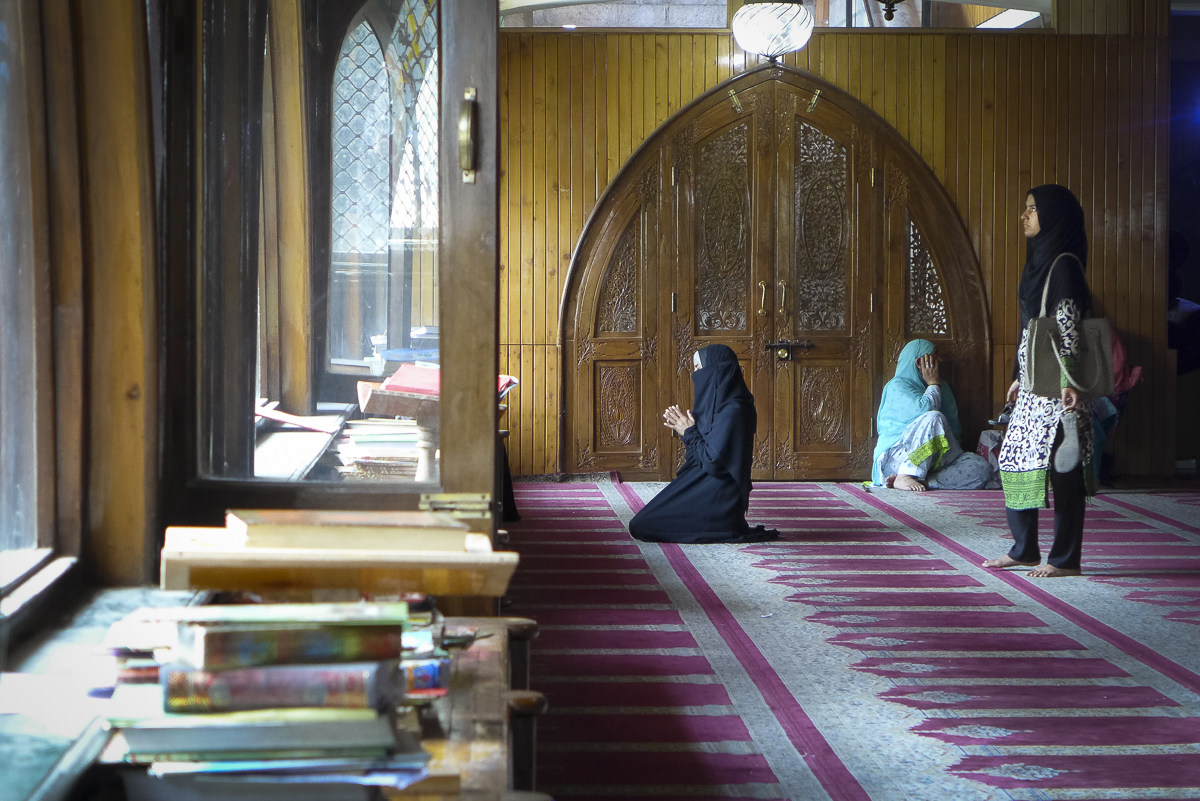 SRINAGAR, INDIAN-ADMINISTERED KASHMIR — Ramadan, the Muslim period of fasting, transforms the city of Srinagar, the summer capital of Jammu and Kashmir state. This year, Kashmiris began observing Ramadan on June 7 and ended the month with Eid-ul-Fitr, a festival that began on July 6.

Ramadan, which occurs on the ninth month of the Islamic calendar, is an opportunity for Muslims to focus on prayer, devotion to God, self-control and charitable acts. A key activity for many Muslims during Ramadan is daily fasting, beginning before dawn with a meal called sehri and ending with a post-sunset meal known as iftar. The iftar meal usually begins with dates and water.

Without fasting, the faith of Muslims is incomplete. Qazi Imran, a religious scholar

The markets and street stalls of Srinagar are filled with food items popular during Ramadan. Pilgrims from all over the Kashmir Valley visit holy shrines located in and around the city. The Ramadan prayer times are observed faithfully, with group prayers held in public areas and outside popular mosques.

“Without fasting, the faith of Muslims is incomplete,” says Qazi Imran, a religious scholar. “Fasting serves many purposes, including being important for self-reflection and abstinence from base desires. Its purpose is also to develop and strengthen our powers of self-control, so that we can resist wrongful desires and bad habits.”

“We keep eating all year and the internal system of the body is always busy, but during Ramadan the system rests for some time, which is beneficial for the body,” he says.

Jammu and Kashmir state is predominantly Muslim, with about 68 percent of the population – more than 8.5 million people – following Islam, according to the Census 2011. 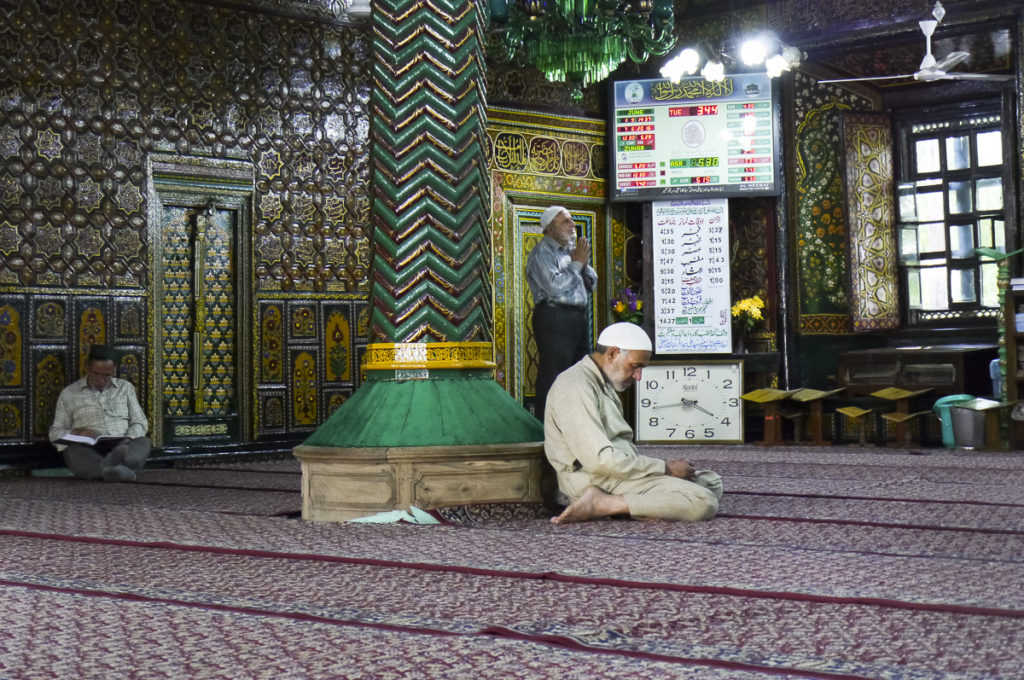 Men pray during Ramadan at Khanqah-e-Moula mosque in Srinagar. 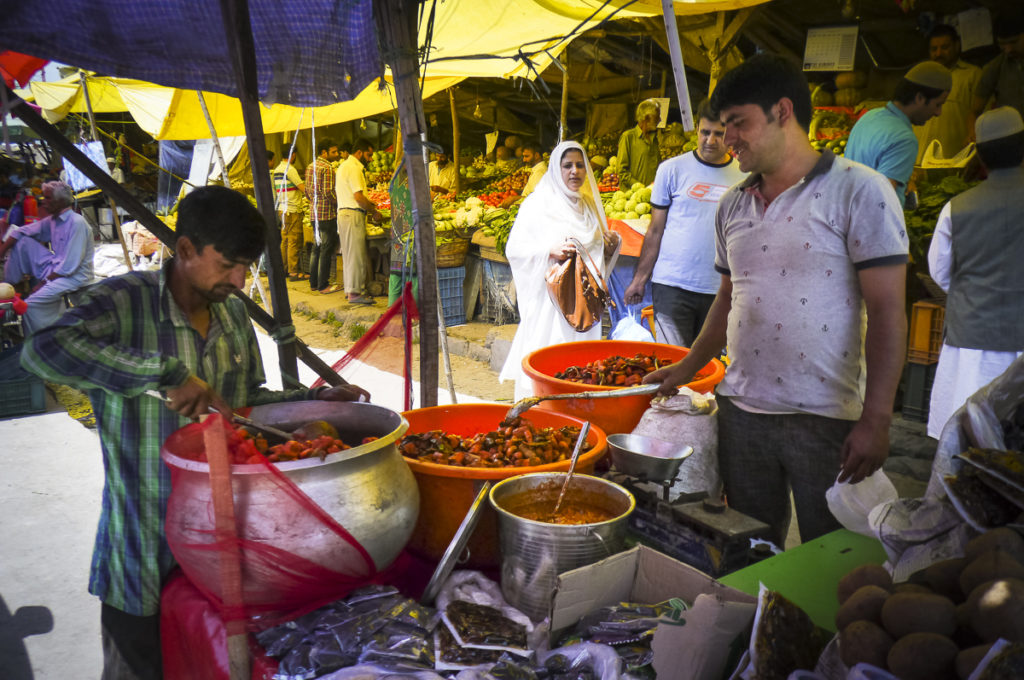 Pickles, shown here at a Srinagar market, are a popular food to eat for sehri, a pre-dawn meal taken before the day-long fast begins during Ramadan. 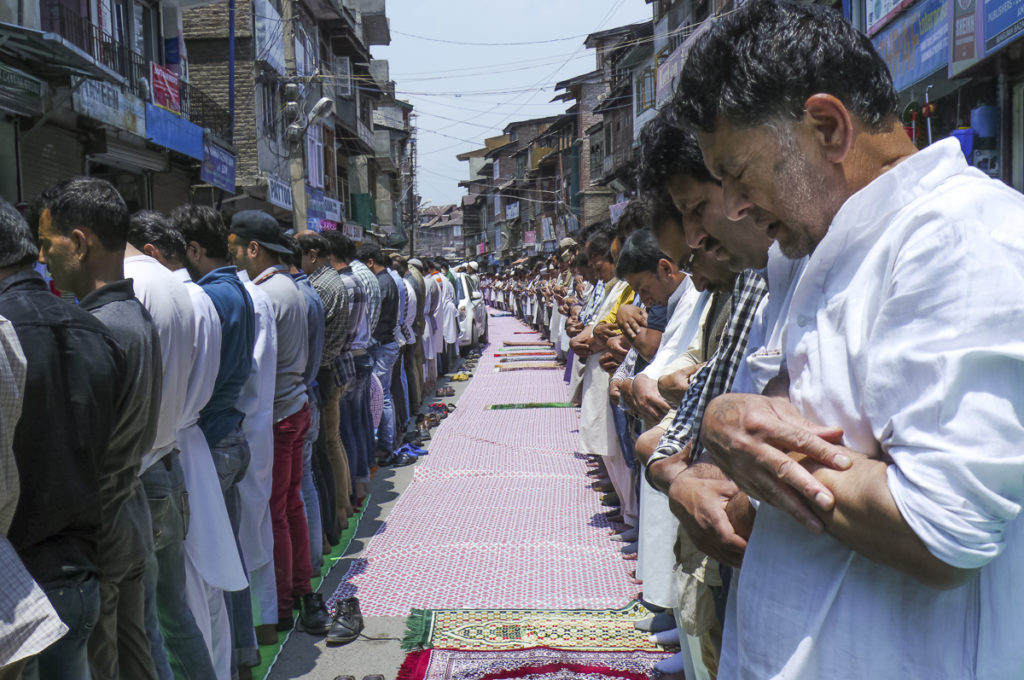 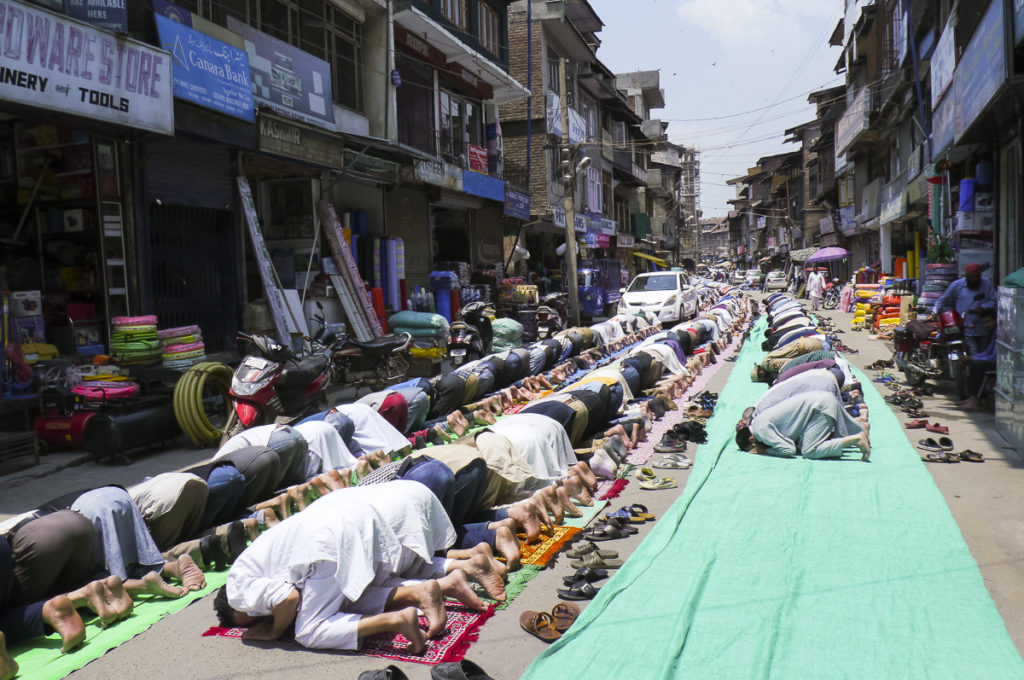 Sections of public areas are turned over to religious activities during Ramadan, such as this street in Srinagar’s Maisuma section, which became an outdoor prayer area. 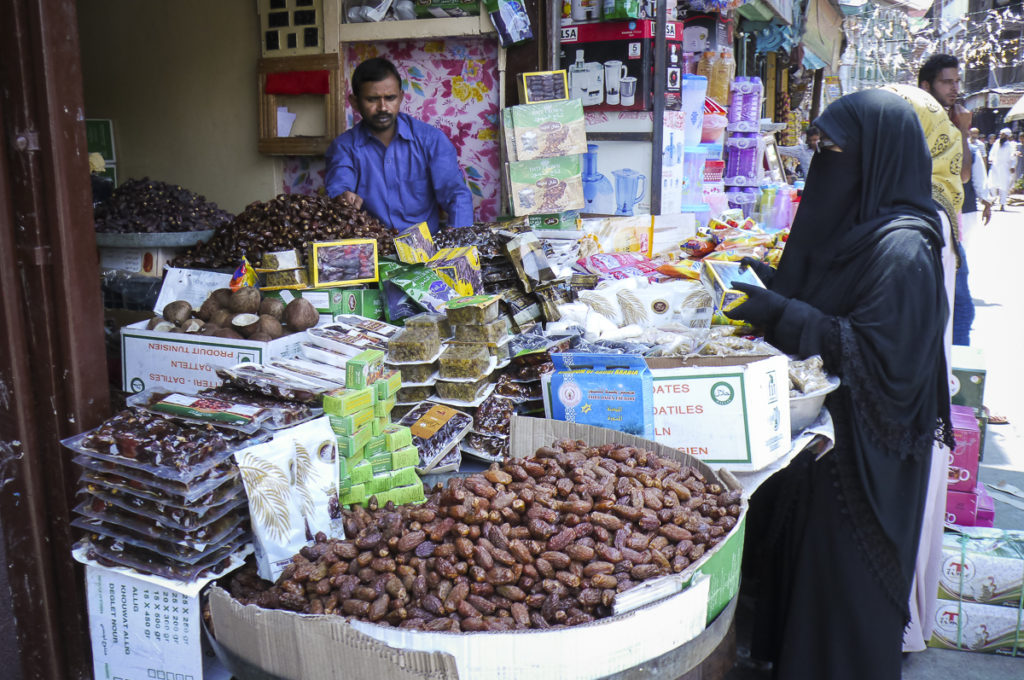 Ram Dev, a shopkeeper, sells dates in his stall on Srinagar’s Hari Singh High Street. Dates are often eaten to break the fast during Ramadan. Dev says he sells dates during Ramadan and ice cream during the summer months. 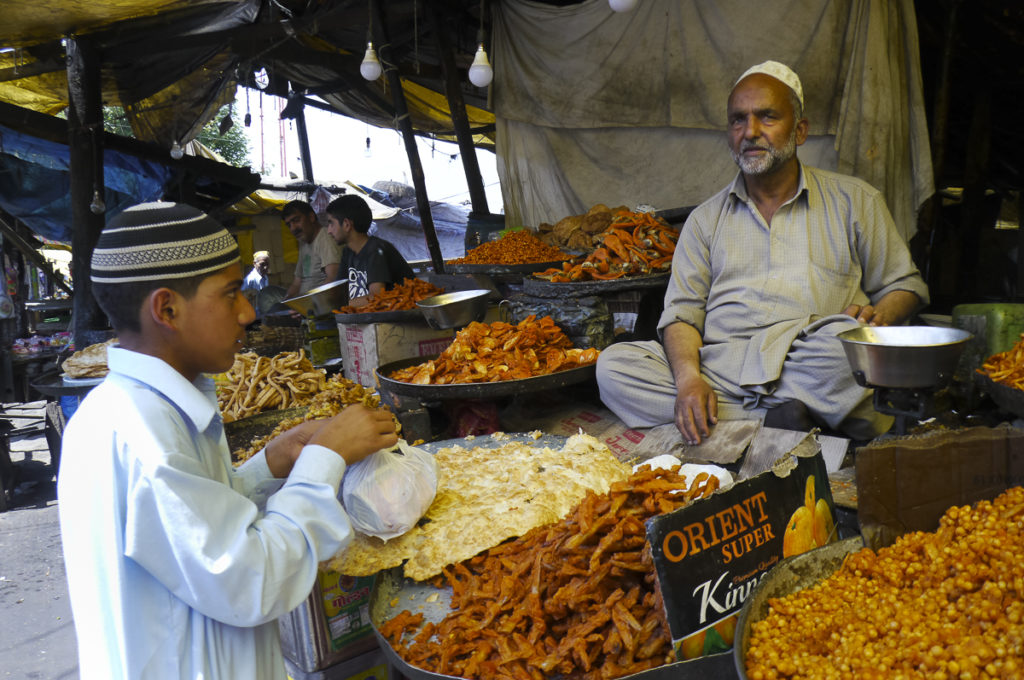 Shopkeepers at a Srinagar market sell cooked food, to be eaten once the fast is broken. 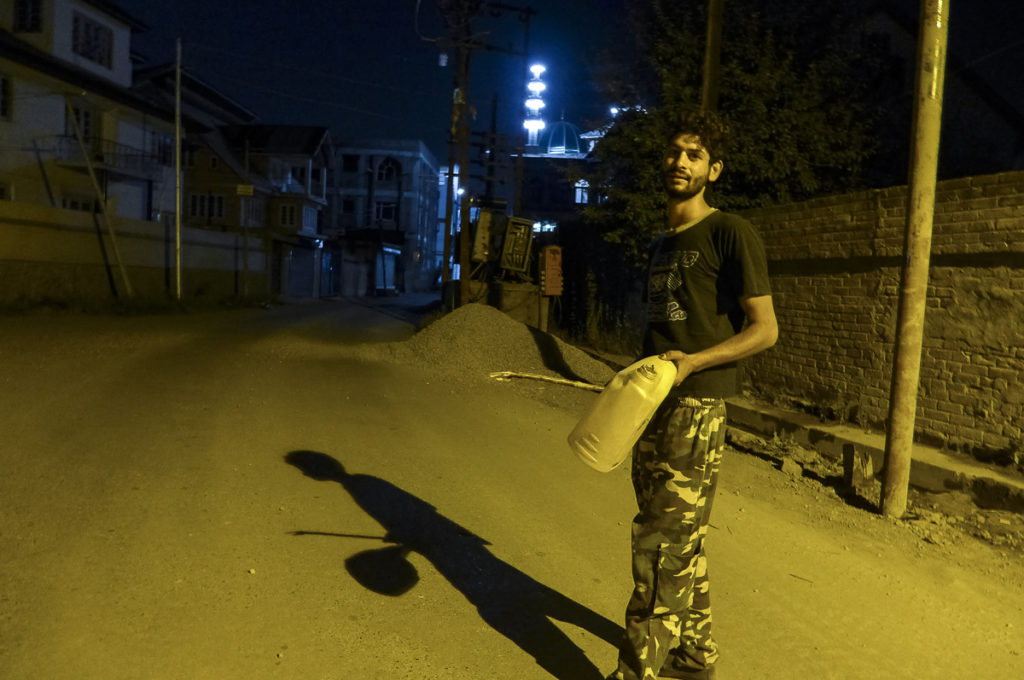 Bilal Ahmad, a drummer known as a sehar khan, beats a plastic can at 2 a.m. to wake people for sehri, a pre-dawn meal eaten during Ramadan before the day-long fast begins. Ahmad beats the can and loudly chants, “waqt-e-sehar,” loosely translated as “time for dawn.” 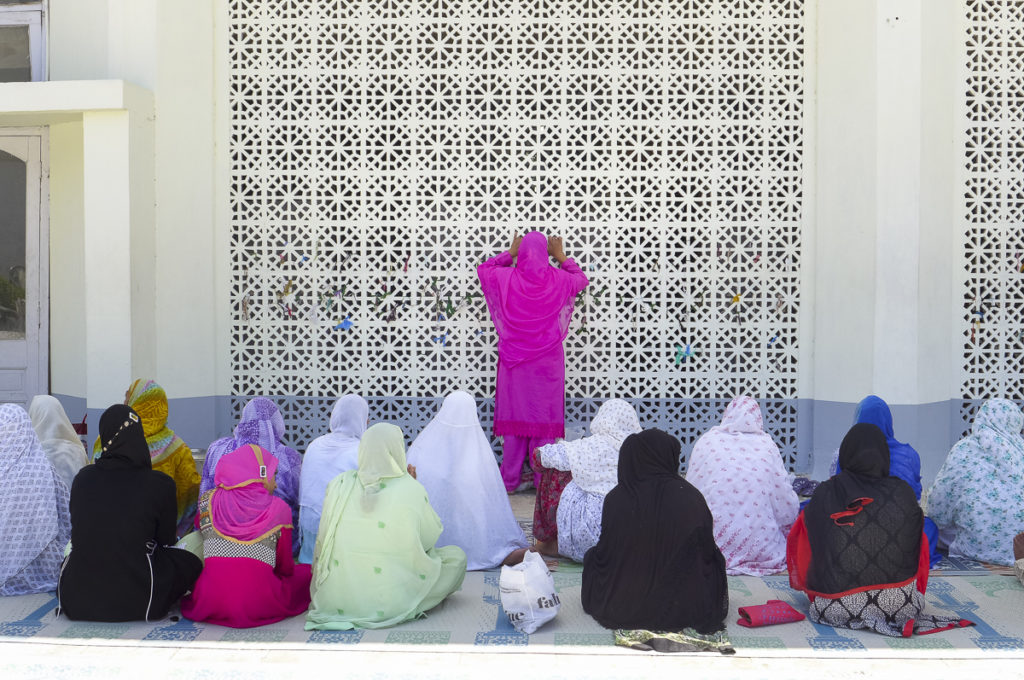 Women pray at the Makhdoom Sahib Shrine in Srinagar. 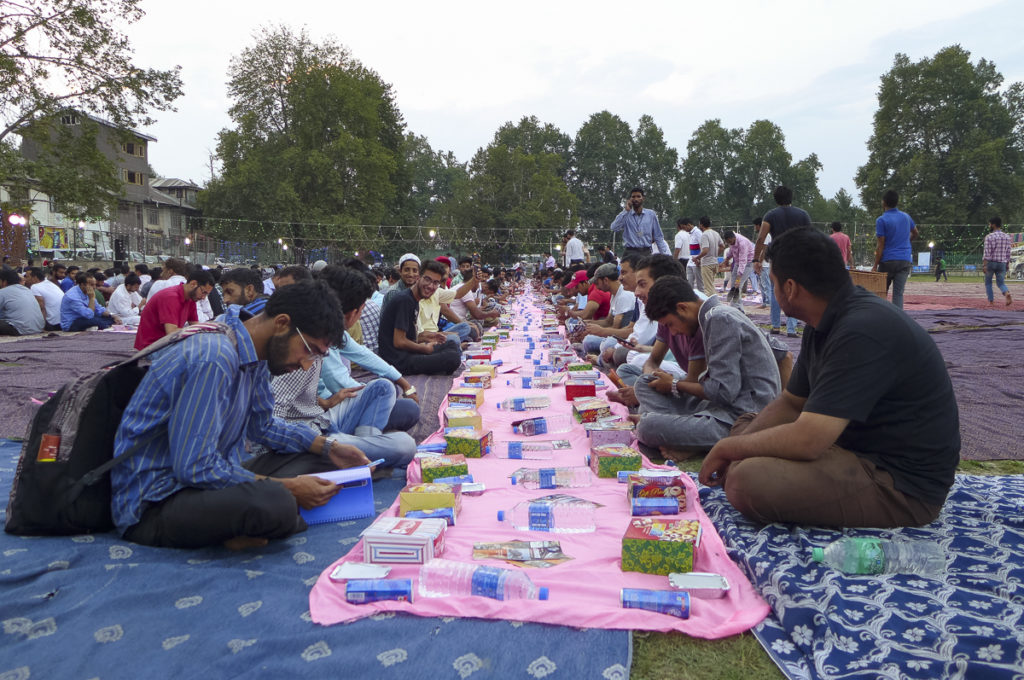 Men wait to break their fast at Polo View, a park. The meal, offered to people free of charge, was organized by an event management company. More than 3,000 people broke their fast together at the park. 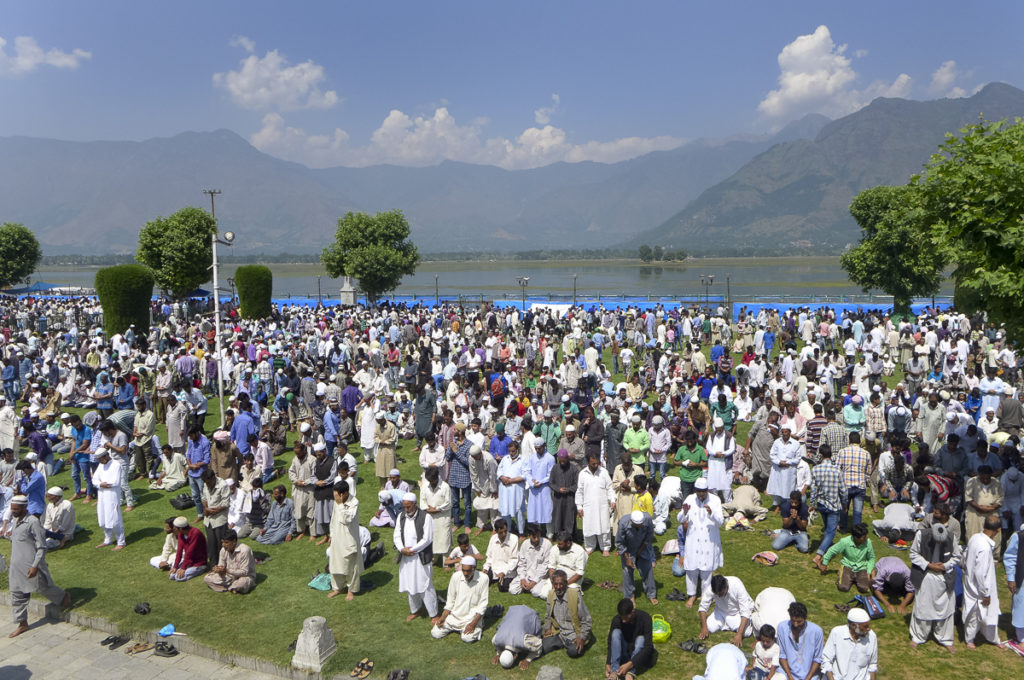 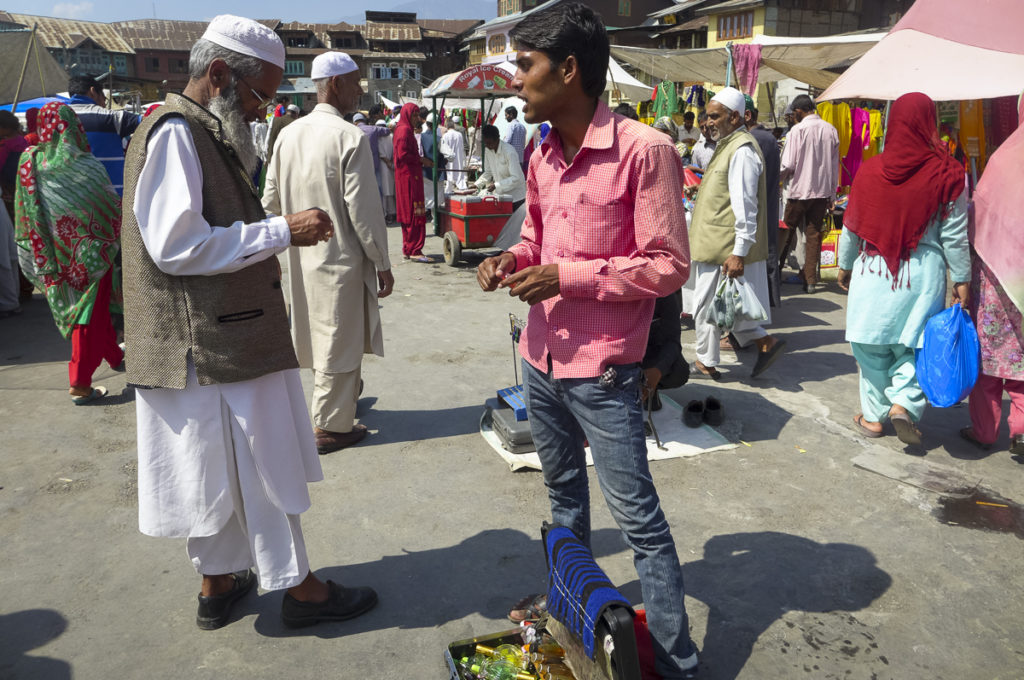 A man sells perfume, which women and girls use especially during Eid-ul-Fitr, the festival that marks the end of the fasting period. 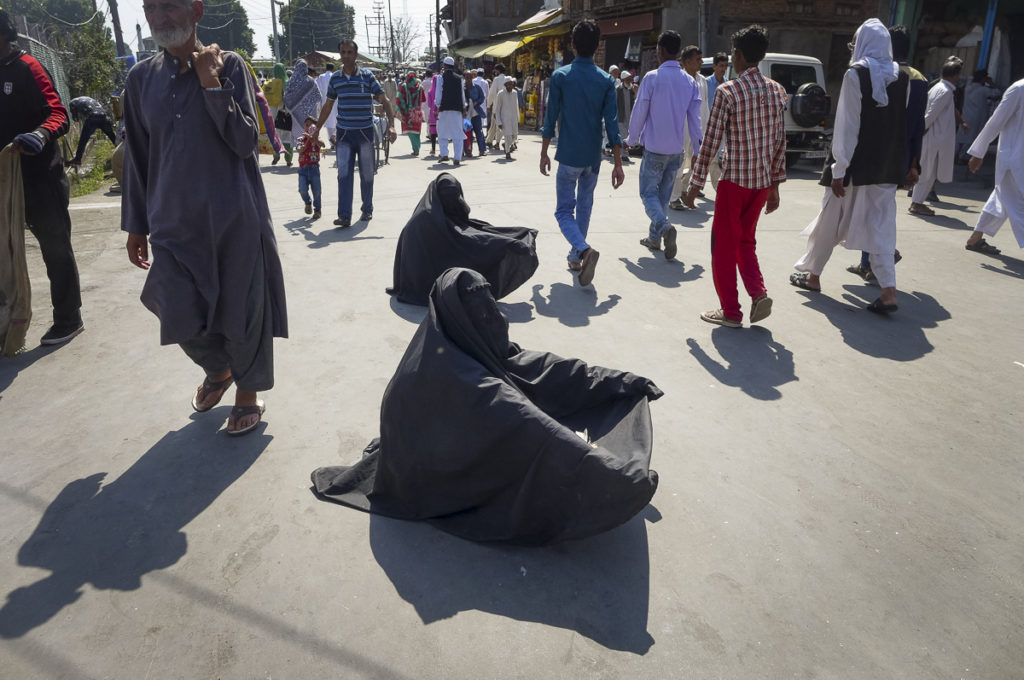 Women beg at Dargah Hazratbal, a shrine in Srinagar. Charitable acts, including giving to people in need, is considered especially meritorious during Ramadan. 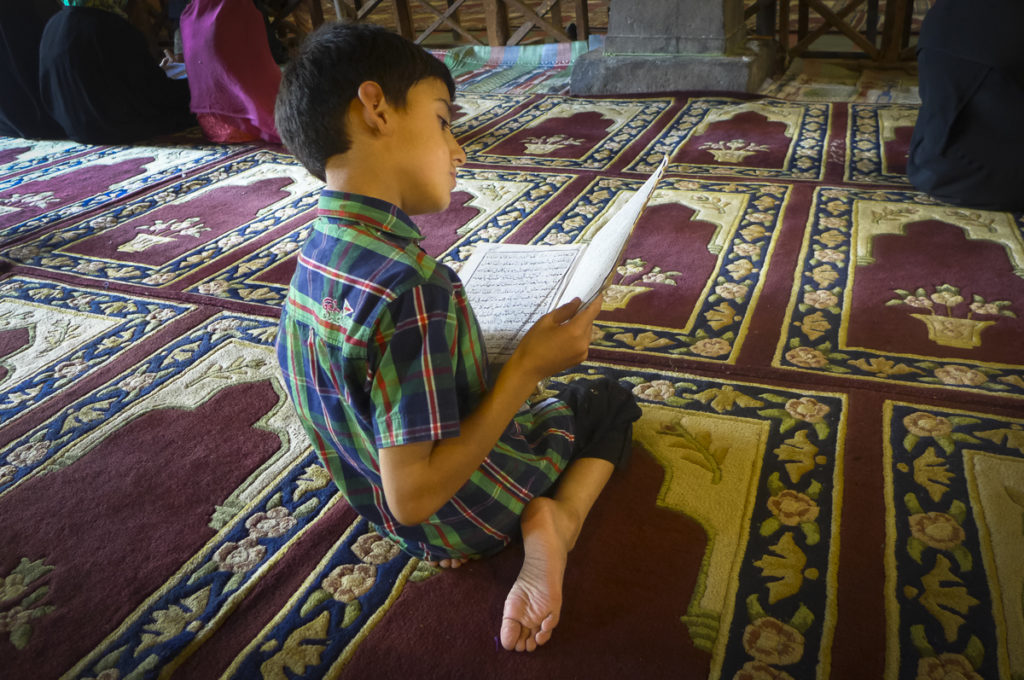 A child reads the Quran at Jamia Masjid, a Srinagar mosque. 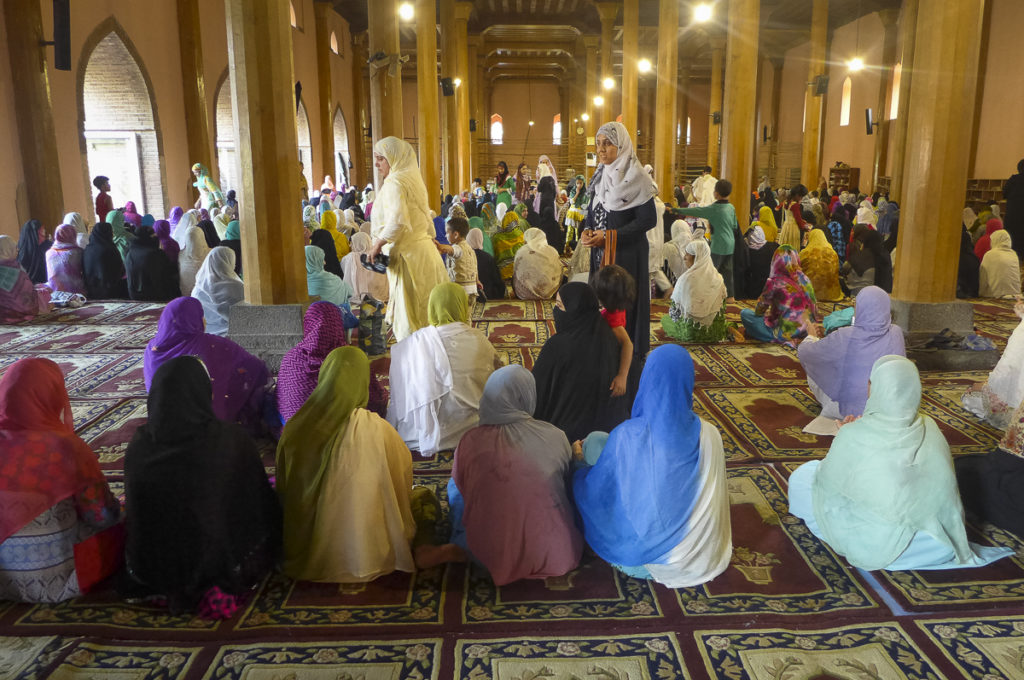 Women pray at Jamia Masjid, a mosque in Srinagar. 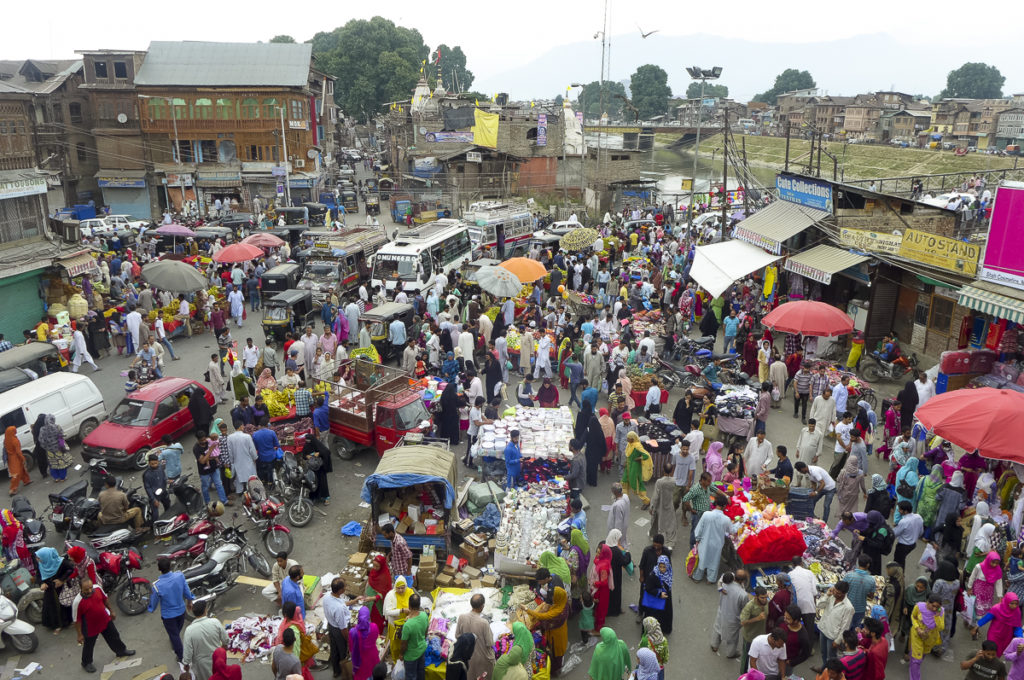 People shop in Srinagar’s Lal Chowk area in preparation for Eid-ul-Fitr, the festival that marks the end of Ramadan.

Raihana Maqbool, GPJ, translated one interview from Urdu to English.