Skip to main content
The story you are reading was published on Sunday February 7, 2016. To read more recent stories click here. 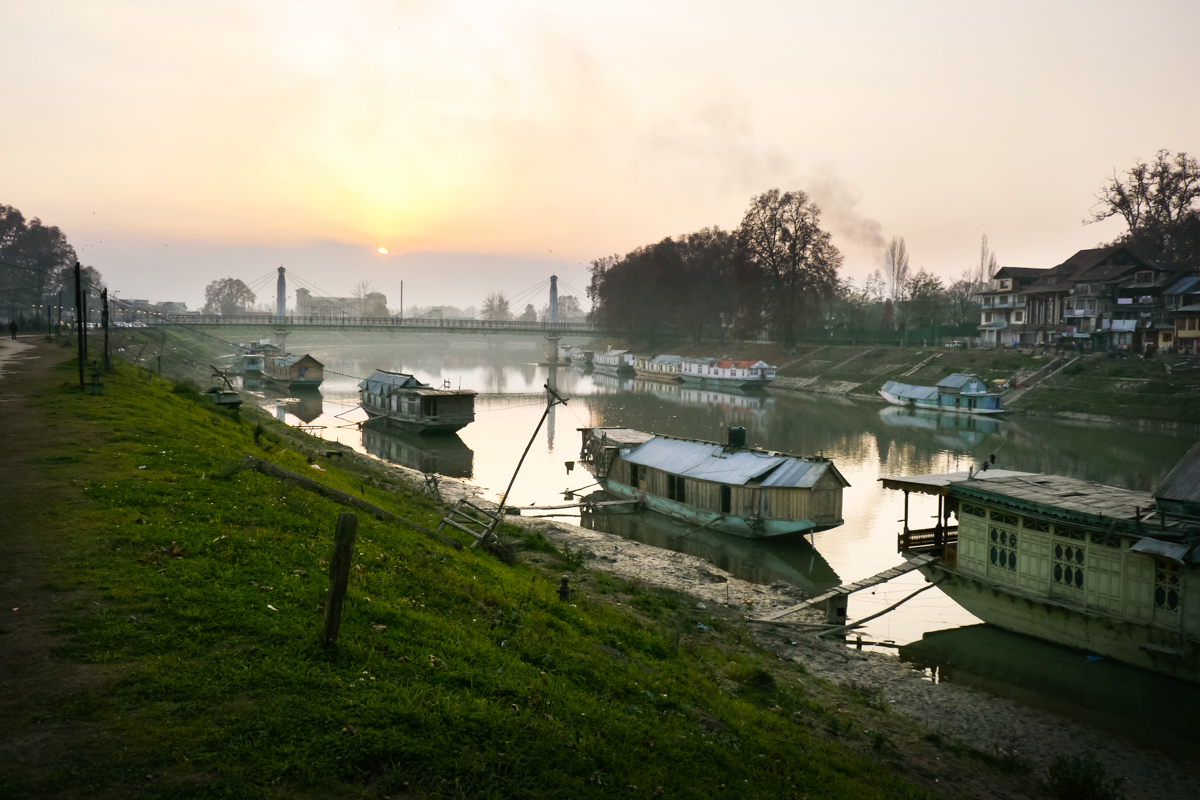 SRINAGAR, INDIAN-ADMINISTERED KASHMIR ─ It was around 4 a.m. on Sept. 7, 2014, and Ghulam Mohammad Matoo, 72, was awakened by the cries of his neighbors. Floodwater from the nearby Jhelum River, was flowing through their street.

Within minutes, the water started pouring into the ground floor of his two-story home.

“At first we thought that it will stop in a few minutes, but it did not and kept on increasing,” Matoo says.

The family fled to the second floor.

Indian-administered Kashmir: “I Saw Many People Who Were Fearful”

Matoo’s house is in the Jawahar Nagar area of Srinagar, one of the worst-hit areas of the city in the September 2014 floods that swept Kashmir Valley. Matoo, his son, daughter-in-law and two grandchildren lived there together.

The water kept rising, so the family left the house. They moved first to a hotel, which was already filling up with people taking refuge from floodwaters.

From the top floor of the hotel, they watched as the water rose around their house, completely submerged the ground floor and continued to rise.

“We had taken no belongings along with us, and from the hotel we saw the house submerged under water,” Matoo says. “It was a very painful scene, and we were all crying.”

The water kept moving through the city, and it was soon clear that the family couldn’t stay at the hotel. They moved again, this time to a relative’s house in downtown Srinagar, which was not flooded. They lived there for about two weeks, until the water in their own neighborhood began to subside.

“It was a tough time, and, living in the relative’s house, my thoughts were always occupied with what will be happening at my place,” Matoo says. “I used to watch television with the family for any flood updates, as there was no other means of communication.”

We always live in fear now. Whenever it starts raining now, it seems that floods will come again. I go outside to check again and again, to see the level of water. Ghulam Mohammad Matoo, 72, who lost his home in the September 2014 flood

When the floodwaters stopped rising, Matoo and his son waded in knee-high water back to their home. They found that it had completely collapsed, with the roof and walls caved in. All that was left was rubble, and it was underwater. Six neighboring houses had also collapsed. The street was destroyed.

“It was heartbreaking to see the house damaged,” Matoo says. “I cried, but couldn’t do anything more.”

Matoo owns a general goods store in the same neighborhood. That building survived the flood, but everything in the shop was damaged, he says.

The floods have left deep scars in Matoo’s family and throughout the neighborhood.

“We always live in fear now,” he says. “Whenever it starts raining now, it seems that floods will come again. I go outside to check again and again, to see the level of water.”

The floods damaged more than just their property, Matoo says.

“The floods have created a fear psychosis in our minds now,” he says.

Those floods were the worst in decades. Barely six months later, in March 2015, another flood warning was issued as the Jhelum River overflowed its banks. 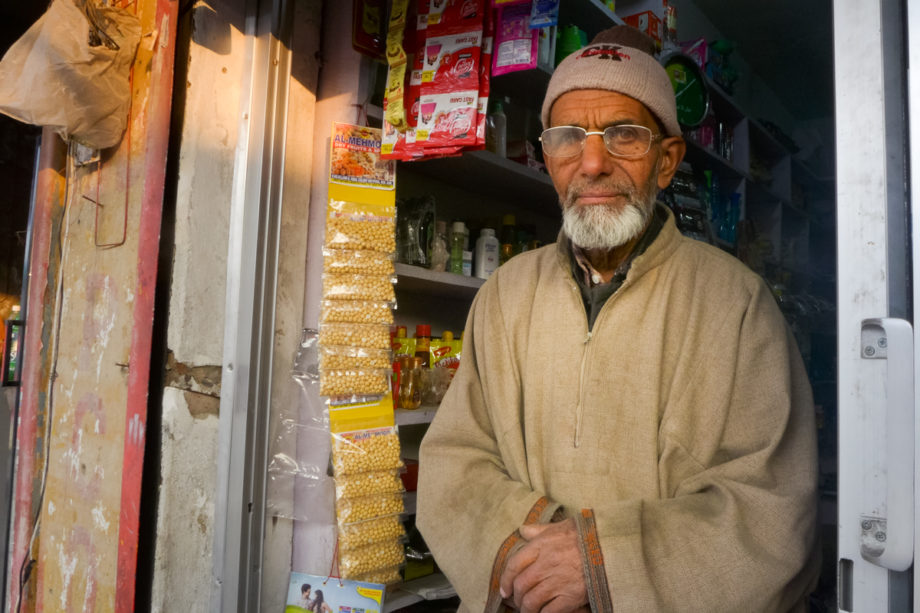 The Jawahar Nagar area of Srinagar, where Ghulam Mohammad Matoo lives and runs a grocery store, was one of the areas in the city hit worst by floods. Matoo reopened his shop and partially rebuilt his home, which had completely collapsed, but says the magnitude of the disaster continues to haunt him.

More than a year has passed since the September 2014 floods, but the people of Srinagar say their city isn’t prepared for another one.

The Kashmir Valley has been subject to several severe floods in modern history, says Shakil Ahmad Romshoo, head of the Department of Earth Sciences at the University of Kashmir.

About 298 people died in that flood, according to the Ministry of Home Affairs. Around 275,000 people in 400 villages across 10 districts in Jammu and Kashmir state were affected.

By late September 2014, losses due to the flood amounted to around 1 trillion rupees ($14.8 billion) Mohammad Iqbal Khanday, chief secretary of Jammu and Kashmir state during the floods, said in a 2014 statement.

Srinagar residents are rebuilding their homes and their lives, and while they remain fearful, they’re making changes to better cope if another flood comes.

It was heartbreaking to see the house damaged. I cried, but couldn’t do anything more. Ghulam Mohammad Matoo, 72, who lost his home in the September 2014 flood

Abdul Gaffar Lone lost his house in Srinagar when it collapsed in the September 2014 flood. He used his savings and some government aid to rebuild in the same location, but the new house has a stronger foundation than the old one did, and the entrance is raised. It’s also three stories tall instead of just one, and the kitchen and living areas are on the upper floors instead of the ground floor.

He now keeps an emergency bag packed at all times, and whenever it starts to rain heavily, he adds the family’s official documents and valuables into the bag in preparation for a hasty evacuation, Lone says.

“We never know when the floods will come again, but the 2014 floods have taught us a lesson to be more aware now,” Lone says. “We have to be more cautious of such happenings in the future again.”

Lone is one of many residents planning for another flood, but experts say the government isn’t following suit.

“Floods are a thing that can be predicted, but unfortunately in Kashmir the government does not have the technology yet,” Romshoo says. “The September flood has given us some time to think in order to prepare for the future. But there is an absence of a proper regulatory mechanism in the valley.”

“They need to take some extraordinary measures,” he says.

Javed Jaffar, chief engineer of Jammu and Kashmir’s Irrigation and Flood Control Department, says the government is taking action. The floods were an eye-opener, he adds.

“One lesson learned was that we could have stored excess water discharge in the catchment areas and then released it once precipitation was over, but we cannot do that, due to Indus Water Treaty,” Jaffar says. 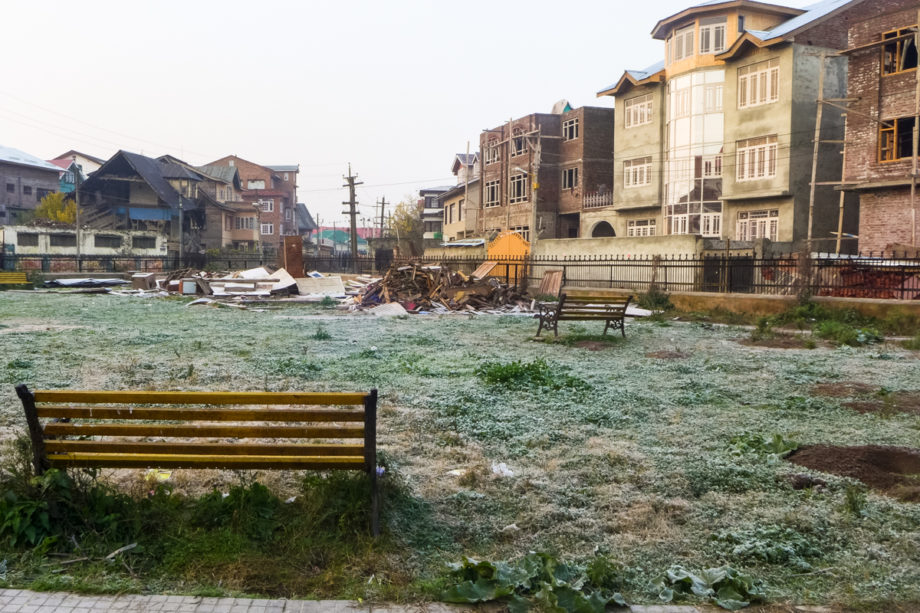 Houses that were damaged or destroyed in the September 2014 floods are being rebuilt in the same locations in Srinagar because many homeowners can’t afford to buy land in areas that aren’t flood-prone.

That treaty, a controversial agreement forged in 1960 between Pakistan and India, allocated water from the Indus River to each country and established guidelines for water use.

Experts have advised the creation of an alternate flood drainage channel, and Jaffar says that a plan to develop a new flood spill channel has been presented to the central government but has not yet received approval.

The government has also taken other precautionary measures, Jaffar says. It now keeps 1.1 million sandbags at the ready, with the capacity to double the number if needed.

“The Jhelum breached at many places due to the overflow. We are now keeping a check on all bunds,” Jaffar says, referring to the enclosures erected to contain leaks. “We have completed the restoration of breaches of the bund.”

The sandbags won’t prevent floods, Jaffar says, but he adds that they’ll help keep water from entering the city.

Part of the ongoing problem is that wetland areas, which are natural catchment areas for water, have become building zones, Romshoo says. The Kashmir Valley is naturally flood-prone, but that development has changed the area’s ability to manage floodwater.

“Flood is a natural disaster, and we cannot stop it,” he says. “But we had wetlands in Kashmir which acted as sponges for the floodwater; but due to the degradation and illegal construction on these wetlands, they no longer absorb the water.”

“Further encroachment should be stopped,” Romshoo says. “The huge amount of discharge of pollutants and drainage water into the water bodies has shrunk them.”

The encroachments into wetland areas is nothing new, Jaffar says. It has been happening for more than a decade, he says.

“It is very difficult to remove the concrete structures, but when it comes to tin sheds, we can remove them,” he says.

Future floods will cause even more damage, as long as people continue to build in flood-prone areas, says Khurram Parvez, program coordinator of Jammu Kashmir Coalition of Civil Society. People whose homes were damaged have rebuilt in the same spots, he says.

“The situation is the same, even though the people have built new houses,” he warns. “A proper plan should be put through so that the damage can be minimized in the future.”

Civil society organizations have been agitating for changes to flood preparedness and building laws, but have had no success, Parvez says.

“We can only question, agitate or put pressure on the government, and we have done it from time to time,” he says.

The groups have presented research-based reports to government authorities, who promise to follow up, but never do, Parvez alleges.

“The government here does not feel accountable to the people of Kashmir,” he says.

“If the course is introduced at a school level, our future generation will have adequate knowledge of such natural calamities,” Romshoo says.

Disaster preparedness is a skill that is already catching on around Srinagar, as residents flood-proof their homes.

Matoo has rebuilt his house up to the roof level, with three floors instead of the two it had before. He spent more than 3 million rupees ($44,253) to rebuild, but ran out before he finished the roof, which he estimates will cost another 100,000 rupees ($1,475). The government gave him 51,200 rupees ($755), he says, and he hopes to get another government grant for the rest of the money.

Until then, the family lives in a rented house nearby.

He knows his new house is also vulnerable to another flood, as the Jawahar Nagar area in Srinagar is on a flood channel where runoff from the river collects naturally.

But Matoo says he cannot afford to buy another property and relocate. The family can only build a stronger and taller house, he says, stay alert during heavy rains and pray they never experience a devastating flood again in their lifetime.