Skip to main content
The story you are reading was published on Wednesday April 12, 2017. To read more recent stories click here. 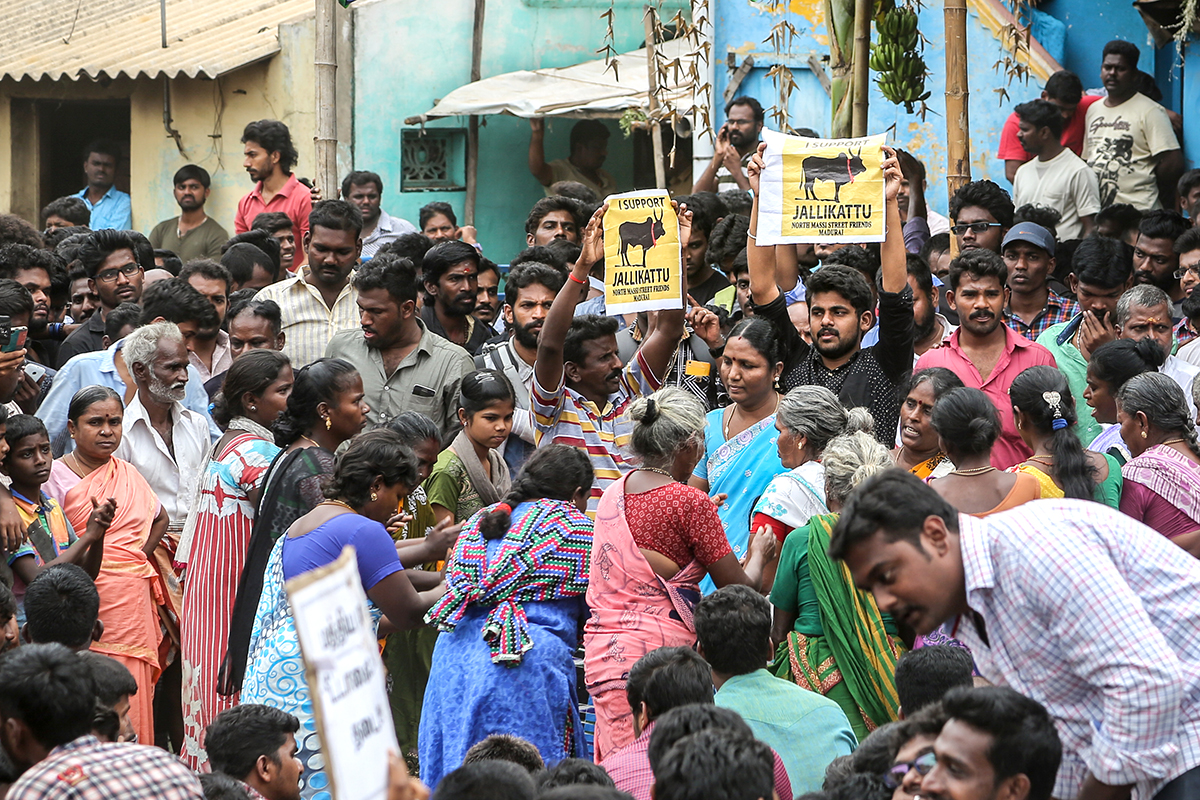 It started in Tamil Nadu, the state at India’s southern tip, where the bull-taming sport of Jallikattu is at the heart of the traditional harvest festival.

Pro-Jallikattu rallies began in mid-January here in Alanganallur village, where the detention of several hundred supporters spurred crowds numbering in the tens of thousands at sites around the state. Within a little more than a week, the state government unanimously passed legislation to exempt the sport from India’s Prevention of Cruelty to Animals Act. By Jan. 31, the law had received presidential assent. 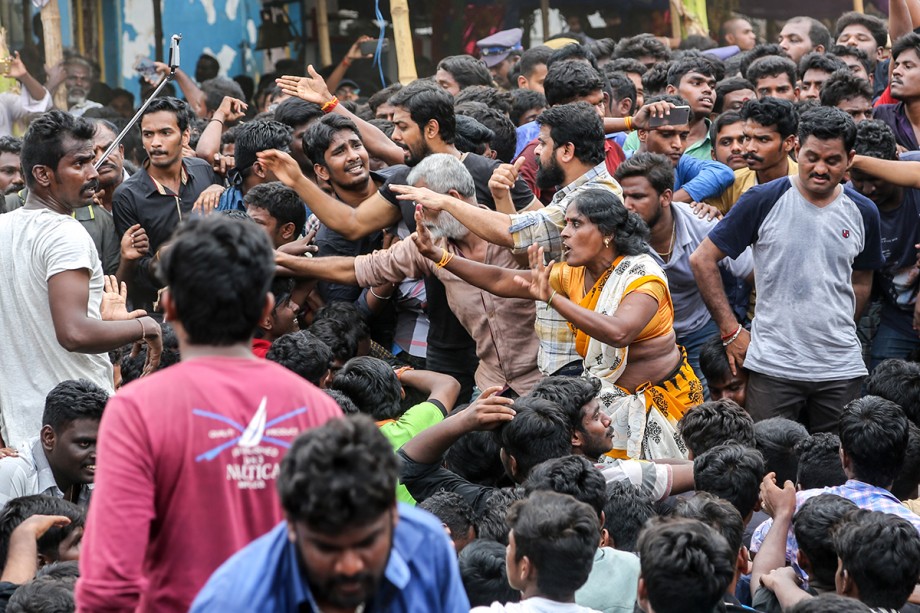 Protesters during the first daylong protest against the Supreme Court ban of the traditional Tamil bull-taming sport, Jallikattu. The protest began on the morning of Jan. 15. Detention of several hundred supporters spurred crowds numbering in the tens of thousands at sites around the state.

Next, the movement to reinstate banned traditional sports spread to the neighboring state of Karnataka.

“If Jallikattu is allowed by Tamil Nadu state government, why not Kambala, too, in Karnataka?” asked Viren Nanjappa, a law student who protested in favor of Kambala, Karnataka’s traditional buffalo cart races.

Karnataka lawmakers in February pleased Nanjappa and other Kambala supporters by passing a law releasing the sport from the purview of India’s animal cruelty laws. Karnataka’s legislation came with a caveat: the race could be held “subject to condition that no unnecessary pain or suffering is caused to the animals by the person in charge of that animal.”

Now animal welfare activists, such as People for the Ethical Treatment of Animals (PETA), are readying a challenge to the new Jallikattu and Kambala carve-outs. They want to block other groups that may also wish to dodge animal cruelty laws. 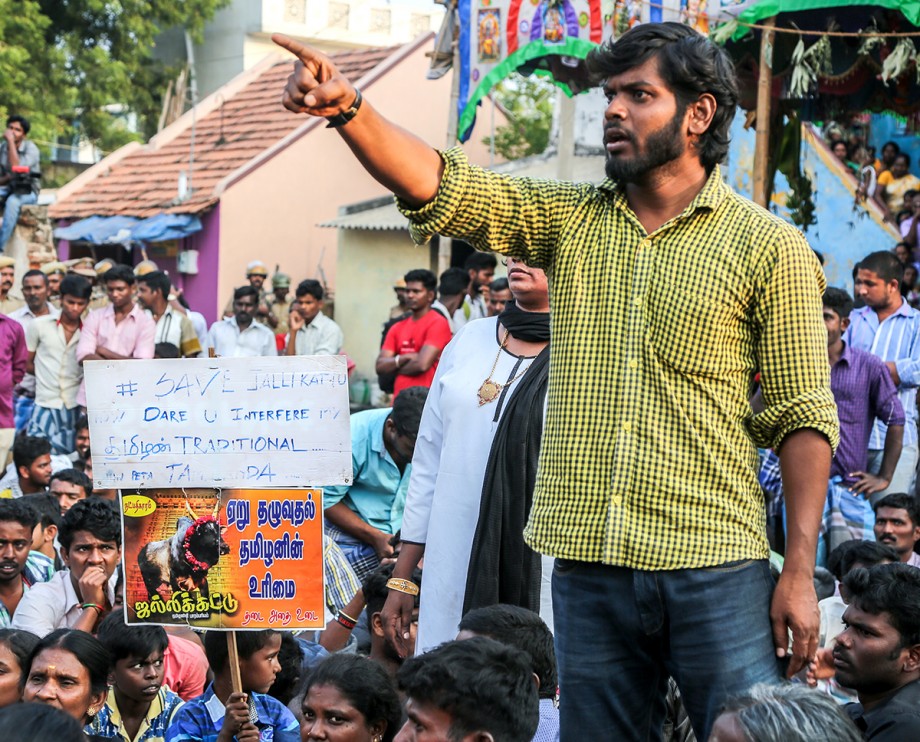 A protester yells as others hold signs during the protest at Alanganallur, India, over the ban of the traditional Tamil bull-taming sport, Jallikattu.

PETA has issued statements condemning both sports, and Poorva Joshipura, PETA’s chief executive officer in India, says the new law allowing Jallikattu will next be reviewed by the Supreme Court.

Traditions
Jallikattu is named for the coin-filled pouches that victors snatch from the horns of bulls. Advocates bristle when the sport is compared to Spain’s bullfights, saying Jallikattu is bull “hugging,” since youth compete to see how long they can stay on the bull’s back by holding on to its horns.

“Our sport is not about baiting or injuring the bull but of embracing the bull,” says Vimala Saravanan, who participated in the pro-Jallikattu protest.

Until outlawed by the Supreme Court in 2014, Jallikattu was an integral part of the farmers’ festival celebrating cattle on Mattu Pongal, a day when harvests are shared between rich and poor, old and young. It’s also one of the few secular rites that serves to unite residents who follow many different religions. Karthikeya Sivasenapathy, managing trustee of Senaapathy Kangayam Cattle Research Foundation, says the sport goes back centuries as it is depicted on the seal of the Bronze Age Indus Valley civilization and is cited in ancient Tamil poetry.

Kambala, Karnataka’s buffalo cart races, also goes back centuries. In modern-day Kambala, dozens of races are held, drawing thousands of people, with buffaloes spurred on by whips. Many bet on which team of buffaloes will pull the cart fastest. 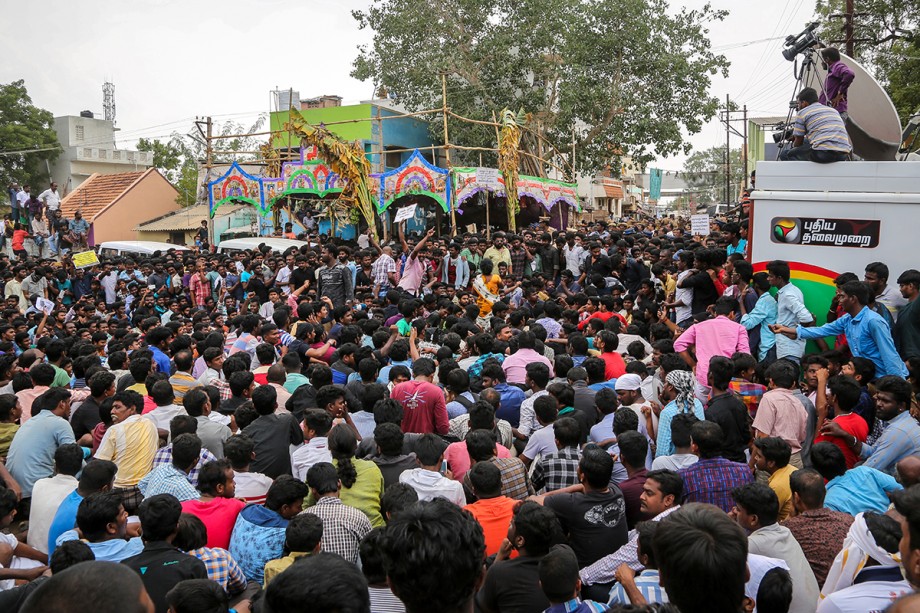 The Jan. 15 protest began in the morning and continued until the police evicted the protesters around 6:30 a.m. the next day.

Native Breeds, Pumping Hearts
Jallikattu supporters say the Supreme Court justices may not have realized that banning Jallikattu would not just deprive a festival of sport but could also jolt an important local industry. Advocates of the tradition say the bulls are prevented from slaughter for only two reasons: the sport and mating.

Shalini Kannan left her city job and her MBA to pursue farming. She says Jallikattu is the area’s premier opportunity to admire and exhibit stud bulls. Without it, the industry likely would resort to a less breed-diverse and more modern way to breed cattle — artificial insemination.

Krishna Kumar, a biomedical analyst and a protester at Alanganallur, agrees.

“If we do not take any actions against this [ban], we will end up losing all our native breeds and [have to] import foreign breeds. As a result, the multinational companies will dominate the dairy industry in India and livelihood of millions of rural Indian farmers will be taken away,” he says.

Tamizh Arasan, 40, a farmer from Alanganallur, says that without Jallikattu farmers would have less incentive to raise native breeds. The practice is already in decline because farmers now use tractors and other modern agricultural methods instead of bulls to plow fields.

Jallikattu is important, he says, because bulls that show alertness and agility are sought after as studs, and their calves bring higher prices. The event enables the bulls to produce hardy stock as well, he adds.

“In the peak of their reproductive period they need to secrete the hormones and experience the pumping hearts” as they are chased, Arasan says. “Some experienced bulls will enjoy the situation and even show off by shaking their heads as a sign. This will show their familiarity with this sport.” 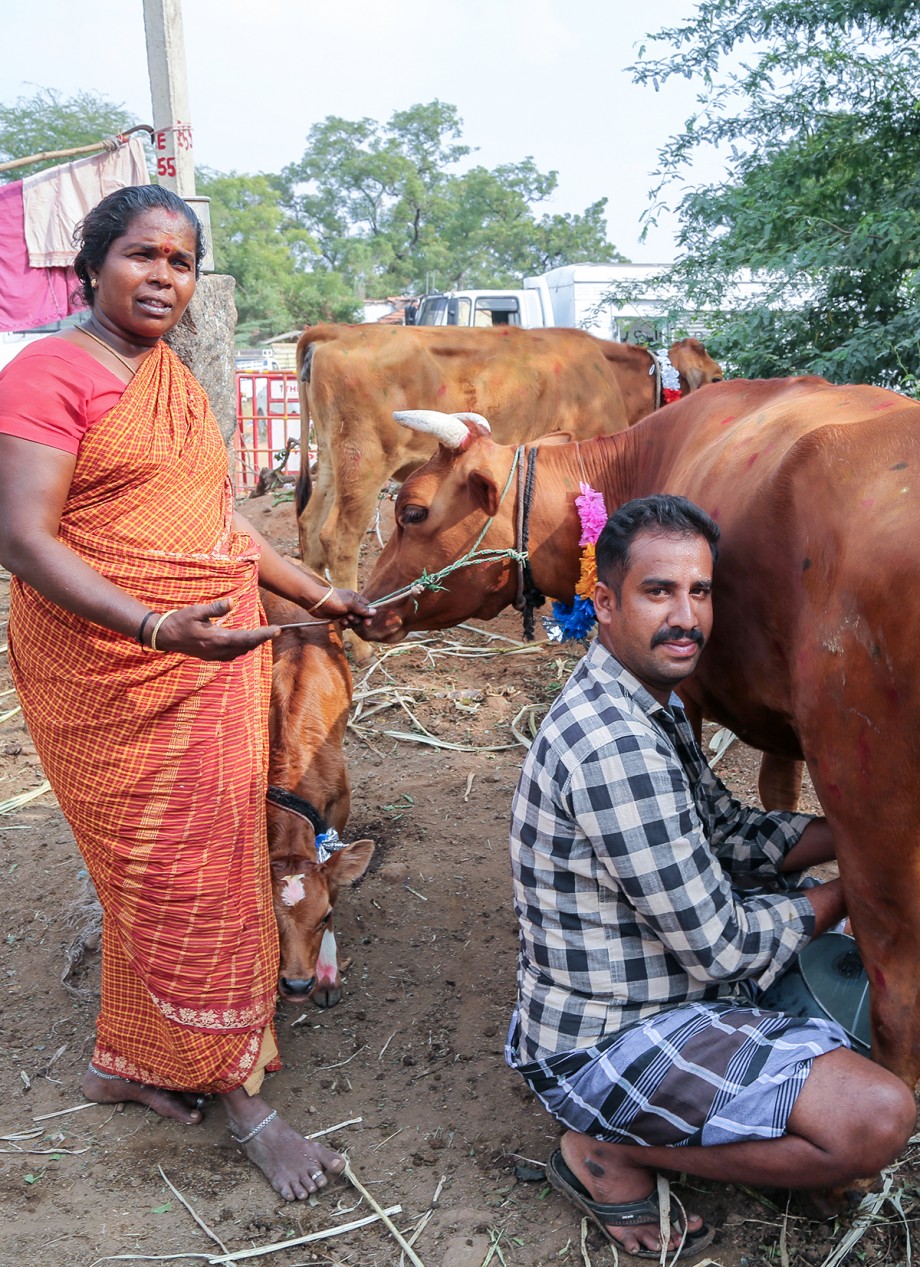 Tamizh Arasan, 40, a farmer from Alanganallur, India, says he was frustrated and disappointed when he thought Jallikattu would not be allowed at the traditional harvest festival Mattu Pongal. After rallies to reinstate the bull-taming sport, legislators stepped in with a law to allow it despite a 2014 Supreme Court ban.

What animal rights activists from urban areas don’t understand, says Arul Selvam, a farmer from Palamedu village, is that without Jallikattu revered bulls become nothing more than meat to slaughter. Without Jallikattu, he says, “the price of such expensive bulls will fall [to] rock bottom.”

Saravanan says animal rights activists produced videos showing that bulls were mistreated, but she says the owners of those bulls should be prosecuted without banning the tradition entirely.

“This PETA should understand one thing – that in our culture we treat cows as family members and we worship them. Our livelihood is dependent on them. Who will risk doing such acts to the bulls?” she says.

Sivasenapathy says the sport should be protected under Article 48 of India’s Constitution, which promotes preserving and improving indigenous breeds. Further, he says, under the Convention on Biological Diversity “it is customary that these ancient traditional customs and practices are kept as they are, but with some rules and regulations to legalize and organize them.”

Sivasenapathy charges that beef exporters and the dairy lobby, which he says work “hard to eradicate all native breeds,” are behind animal welfare organizations’ campaign against Jallikattu.

“We advocate a vegan lifestyle, which means we actively campaign against the meat and dairy industries because of their inherent cruelty,” she says.

The Fight Against Cruelty
Joshipura says the cruelty of both Jallikattu and Kambala cannot be denied as studded prods and whips are commonly used to spur the animals on. The sports, she says, should be clearly banned under India’s Prevention of Cruelty to Animals Act 1960 as decided by the Supreme Court in 2014.

Humans also sustain injury and sometimes death from the sport. PETA attributes more than 1,000 injuries and 17 human deaths to the sport from 2010 to 2014. The 2014 Supreme Court decision mentioned injuries to 58 participants and 56 spectators.

“The highest court in the land has made it clear that spectator sports such as bullfighting and bull races, which harm bulls, and Jallikattu — which involves deliberately terrifying them so much they often break their bones, frequently injure or kill humans, and sometimes die — are criminal,” she says. She says that in responding to the petition of the father of a boy who died during a Jallikattu event, “the court came to this well-thought-out conclusion following years of deliberation.”

PETA, she says, will continue to fight to ban Jallikattu and Kambala and other events in which animals are harmed. “We at PETA India remain committed to standing up for all those who face cruel treatment and will seek necessary legal remedy, as per the advice of our legal experts.” 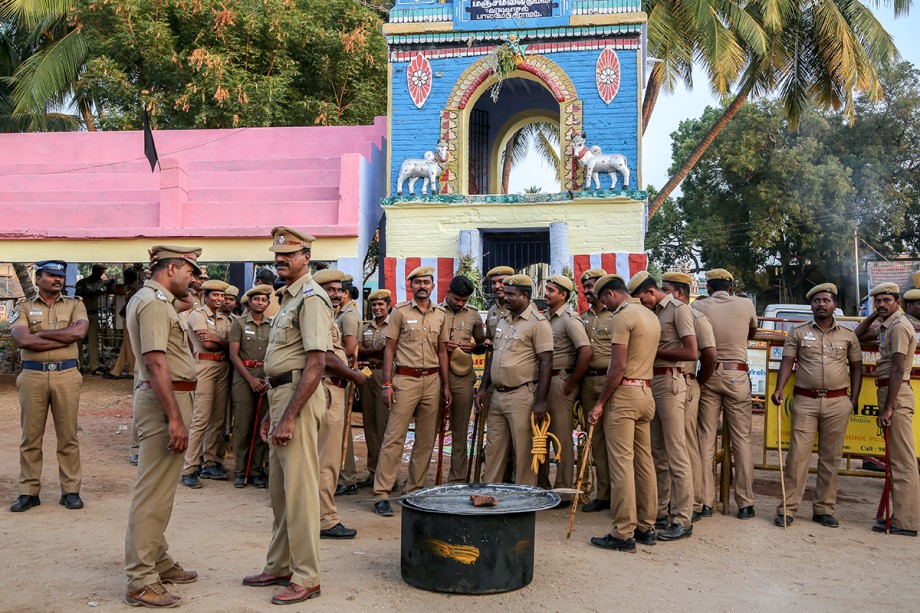 Police forces are deployed at a “vadi vasal,” a closed area where the bulls are released for the bull-taming sport of Jallikattu, in Palamedu village in Tami Nadu, India, on Jan. 14, 2017, the day before pro-Jallikattu rallies in Alanganallur. Barricades were placed around the vadi vasal of Palamedu after villagers brought six village temple bulls and performed religious rituals near the vadi vasal and then released them for Jallikattu. Hundreds who gathered near the vadi vasal began to applaud despite the Supreme Court ban of this event.