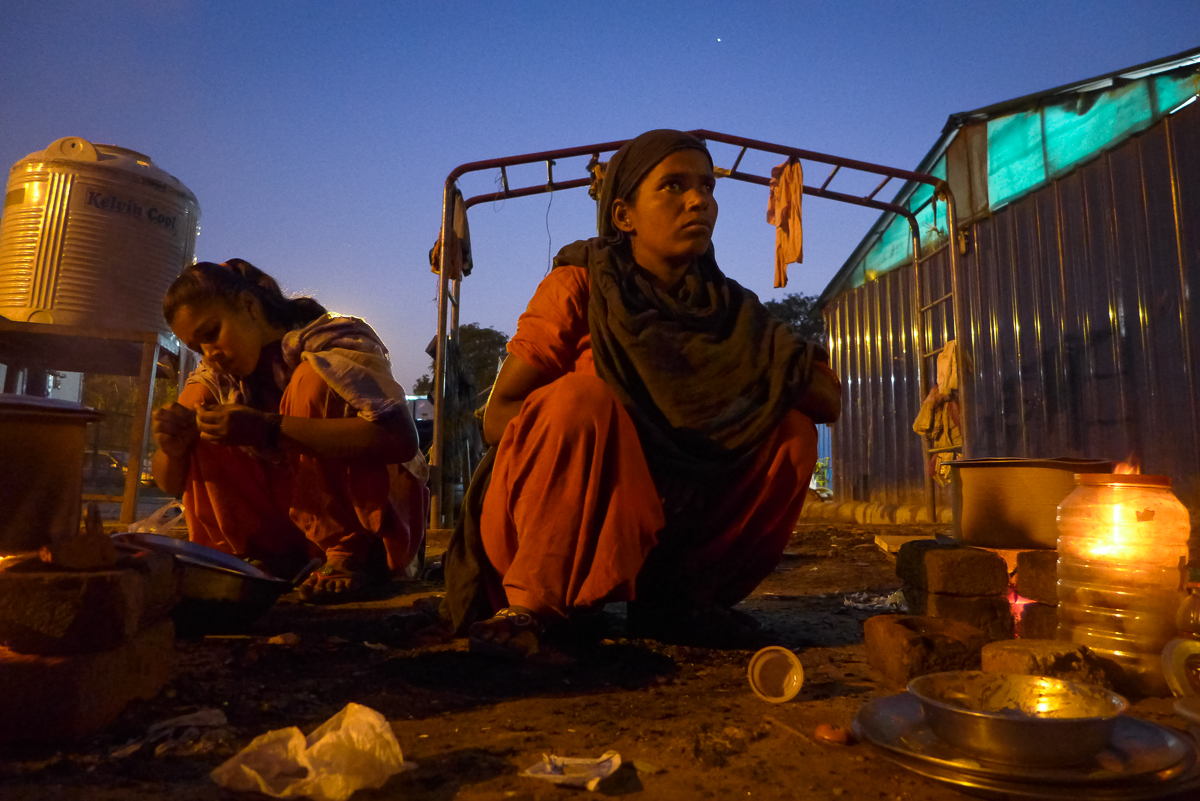 NEW DELHI, INDIA – Walking through the narrow alleyways of New Delhi, the capital of India, a tall, stout man leaves a trail of silence as he enters a homeless shelter.

The shelter, made of tin and lined with cardboard, is painted blue. Piles of old, rugged clothes and blankets lie inside.

Delighted by the sight of their visitor, old women and children run to hug Indu Prakash Singh. They lovingly call him “Induji,” adding a Hindi honorific suffix to convey respect.

Singh adjusts himself on the floor near an elderly woman. The woman complains about the lack of space at the shelter. Singh puts a hand on hers. Calling her “Mataji” – Hindi for “mother” – he assures her everything will be fine.

Singh is engaging the new government of the national capital territory of Delhi to provide better facilities for people who have no place to lay their heads.

“I do not call them homeless,” Singh says. “They are the city-makers because they are the ones through whose labor and sweat any city is made.”

Singh visits the shelters three nights a week. By day, he develops plans for meetings with the government. He spends nearly four hours a day on this volunteer work beyond his full-time job working on homelessness and housing at ActionAid India, an anti-poverty agency.

“Homelessness is a grave issue in India,” Singh says with concern. “All the homeless people should get a place to live with basic facilities.”

Singh has been fighting for the rights of homeless people in Delhi for 15 years. He is determined to persuade Arvind Kejriwal, the new chief minister of the national capital territory of Delhi, to improve shelter conditions.

In a series of meetings with Kejriwal, Singh has proposed modeling Delhi shelters after those in Chennai, the capital of the southern Indian state of Tamil Nadu. He is also pressing the government to hire more people to manage the shelters and care for their inhabitants.

Singh plans to meet with Kejriwal again, perhaps as soon as the end of May. He hopes the administration will soon decide to implement these recommendations.

More than 1.7 million Indians are homeless, according to the 2011 census.

More than 100 million people worldwide were homeless in 2014, according to Habitat for Humanity.

Singh attributes the surge in Delhi’s homeless population to an influx of people in search of work. Delhi’s unemployment rate is 4 percent, according to the Labor Bureau.

Shelter facilities serve discrete needs. Some shelters are solely for men; others welcome only families or recovering addicts. These facilities are often grouped together.

The master plan calls for 25,000-square-foot (2,322-square-meter) shelters. Delhi has over 270 shelters, according to the governmental Delhi Urban Shelter Improvement Board, but they do not all meet that standard.

The total shelter space is deficient by 87 percent, confirms Kamal Malhotra, who was the director of night shelters for the Delhi Urban Shelter Improvement Board, an agency of the Delhi government, at the time of this interview. He recently transferred to the Ministry of Labor and Employment.

Nongovernmental organizations have been running the shelters in Delhi ever since Singh and his Shelter Rights Campaign won a 2001 court ruling. Affirming Singh’s contention that the government was not fit to run the shelters, the High Court of Delhi turned them over to the NGOs.

The ruling marked the first time the court had taken control of the shelters away from the government, Malhotra confirms.

For Singh, the election of the new chief minister presents an opportunity to re-engage the government in the shelters. Kejriwal understands the problems of the people and is open to partnering with NGOs to improve shelter conditions, Singh says.

“Kejriwal is a common man’s minister and looks at their needs before all,” Singh says.

Singh approached Kejriwal after he was first elected in December 2013. The two met once in January 2014, but their discussions paused for a year when Kejriwal resigned after 49 days in office. Kejriwal was re-elected in February 2015.

Singh has met with him four times since, most recently on March 30.

“I have talked to the chief minister on this issue and told him that we should take a look at the Chennai shelters,” Singh says. “They are the best in India, and we can use them as models to build shelters in Delhi.”

“The shelters should at least have a kitchen, where the people can cook, and also beds,” Singh says.

“The government should come up with special schemes such as easy loans for homeless women who want to start up some small business,” Singh says.

Katherine Lambha, a local beggar, says Singh helped her relocate to the Sai Baba Mandir Shelter in New Delhi when the slums where she had lived for nearly 50 years were demolished.

“Mostly during winters, a huge number people live in these shelters, and we do not get space to breathe,” Lambha says. “We talked about the problems of overcrowding in the shelters with Induji, and he assured to help. We have no place to cook, so he is also aiding us to get kitchens and beds.”

Sunil Kumar Aledia, a volunteer who has been working on Singh’s team for 15 years, calls him a guide and a mentor.

“He is an organization in himself,” he says.

“Together we have in these years visited many shelters at night, and I remember wherever he goes he hugs these people,” he says. “They are like an extended family to him. He celebrated the new year with the homeless porters, which is very unique.”

Birender Singh, 52, has lived for nearly 14 years in Yamuna Pushta, a New Delhi shelter run by one of Singh’s NGOs. He moved to Delhi from Bihar state in search of work.

“I work in Delhi by doing many odd jobs and had no place to live,” Birender Singh says. “I came to this shelter in 2001, and now it is my home. Induji is always there when we need him.”

“He has made us aware of our rights,” he says.

Indu Prakash Singh says he was moved to serve “city-makers” after witnessing the number of homeless people dying on the roads of Delhi.

“I questioned myself why there is such a problem in our society,” he says. “Why does no one care about these people?”

Renuka Gupta, Singh’s wife of 26 years, is proud of the way her husband has dedicated himself to the work since launching the Shelter Rights Campaign in 2000.

“For many years, he would literally live on the streets at night and work in the office during the day, so he was, in a way, an absent husband and father,” she says.

“He wants a government system that will be sensitive to the needs of homeless people,” she says.

Malhotra says that Singh is working for the homeless at an individual level.

“He is doing right work at his own level, and we are doing at our own level,” Malhotra says. “We have conflict at many issues. He always finds faults with our policies.”

“He is not against the government but only files and quotes the legal provisions, like he is asking the government to make the shelters as per Delhi Master Plan and provide the required space,” Aledia says. “He wants the homeless to come forward and speak for their rights, and he will stand with them.”

The government is addressing issues Indu Prakash Singh has raised. It has formed monitoring committees in the Kalkaji Mandir area shelters, but establishing them for all shelters will take time, Malhotra says.

“The government has also taken four plots from Delhi Development Authority for the shelters, but it will take minimum four years to build the structures,” Malhotra says.

The shelters will comply with the guidelines of the Delhi Master Plan, he says.

“We will take this issue up in the High Court [of Delhi] and Supreme Court of India if the government doesn’t provide a dignified existence to the city-makers,” the activist says.

Working for homeless people has made him a better human being and an unrelenting fighter of all injustices, he says.

“This is my passion, and I will continue to keep it alive until the end,” Indu Prakash Singh says. “I visualize a day when every single person here will have a place to live.”

Indu Prakash Singh and Birender Singh are not related.