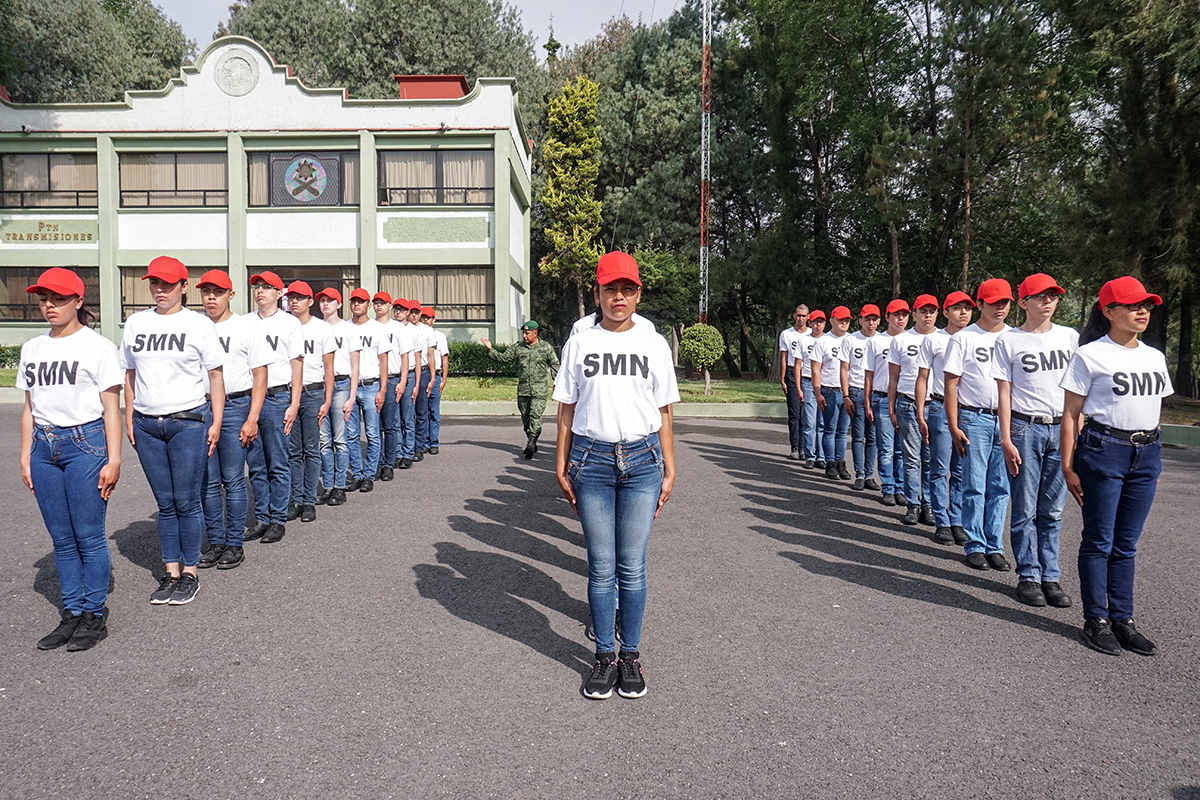 MEXICO CITY, MEXICO — During the week, Jazmín Flores works at a Kentucky Fried Chicken. But on Saturdays, the 21-year-old wakes at dawn for training.

Dressed in uniform, she joins a growing crowd of more than 400 men under a large Mexican flag to sing the national anthem.

“I am sure that with determination and getting the ‘I can’t’ out of my head, I will be a soldier,” she says.

But according to government statistics, the number of women enlisting each year is declining, despite outreach efforts. And women who do participate cite unequal treatment and an inability to gain the same recognition as men as barriers to their success.

This year, the number of women enlisted hit an all-time low with a total of 852 volunteers. Flores is one of only two women in her training group. 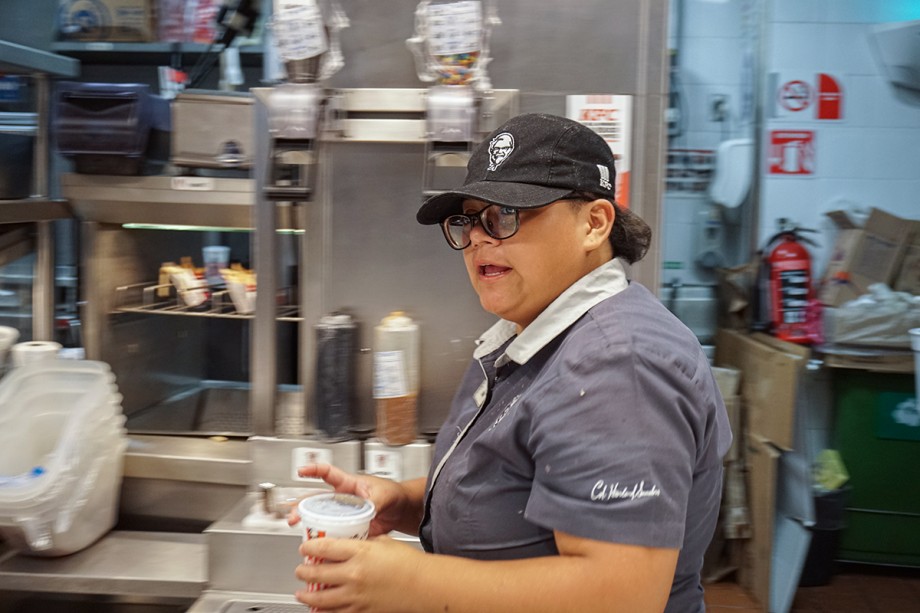 Jazmín Flores works at a Kentucky Fried Chicken in Mexico City. She joined the National Military Service because she has plans to study at the Military School of Dentistry. “I am sure that with determination and getting the ‘I can’t’ out of my head, I will be a soldier,” she says.

“Chatting with my colleague while we watched our male colleagues run, we said that we would like them to have us do the same as them,” says Flores, who is a member of the 3rd Paratrooper Infantry Battalion. “That’s the excitement of service.”

Manuel Alejandro García Ramírez, Director of the Training Center for the National Military Service, says the program includes weapons and defense training and instills a respect for country, national symbols and values like honor and loyalty in participants.

“For women, it’s an invitation,” García Ramírez says. “We are very aware of the importance women have acquired in national life and obviously the armed forces are not exempt from this. We understand it perfectly and they are welcome with all of their capacity, ingenuity and desires to join up voluntarily.”

García Ramírez says the military service was created at the start of World War II to guarantee the sovereignty and independence of Mexico. The training provided men with basic military knowledge in case additional soldiers were needed to fight, though García Ramírez says that additional soldiers have not been called upon in the history of the military service.

Today, participants train over the course of 44 Saturdays.

The government funds the program and breakfast on training days. Those who participate pay for the required uniform: a shirt and cap that totals around 160 pesos (about $8).

Men are required to attend more than 90% of trainings in order to complete the program, says García Ramírez. Women must attend at least 30%. 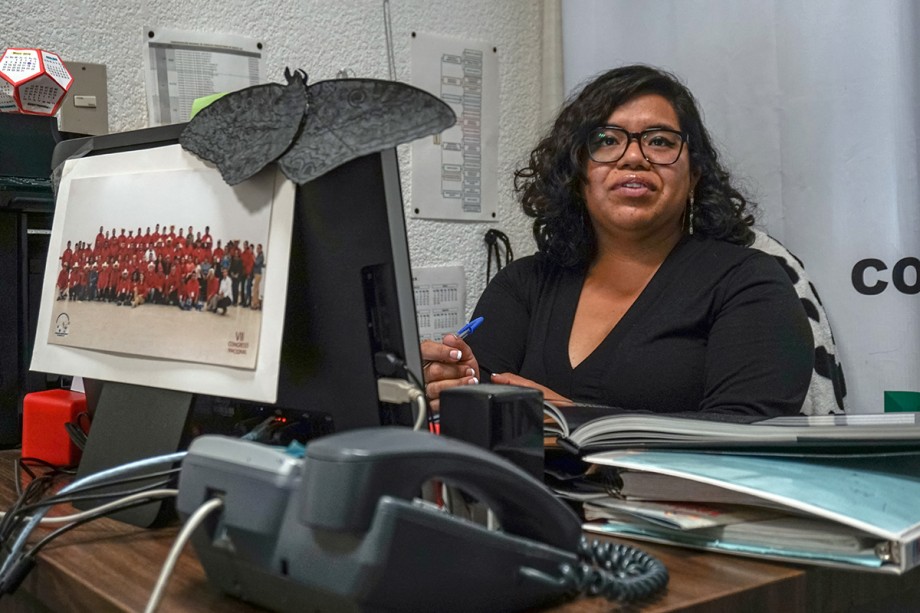 Thania López sits in her office. She is one of two women in her National Military Service training battalion. She says she joined because of her love for the cultural diversity she encountered while distributing basic food supplies with the civil association she works for.

Upon successful completion of the training, men receive a National Military Service Identification Card, which gives holders access to certain government – and private sector – jobs. But currently women do not receive the card, regardless of how many training sessions they attend.

“I feel unequal,” says Flores. “They should give us a card also because they treat us differently just for being women.”

She says she joined in order to learn about the dynamics of military life but has been disappointed with the way women are treated – especially when it comes to the physical components of the training.

“They said, ‘Don’t make them do squats or sit-ups because they are women and they can’t do it,’” she says. “But I think we are there for a reason and they should treat us equally.”

Upon completion of the program, Flores plans to enter the Military School of Dentistry.

“The physical part can be the most difficult. The tone of voice is softer for women,” says Gabriela García Rodríguez. “It makes me feel bad because I am in favor of equality and the instructors are easier with us.”

García Rodríguez says she always wanted to join the military, but her father was opposed to her volunteering. When he died, she decided to apply. At 29, she is one-year shy of the maximum cutoff age to enter the military service.

“If my dad were alive, I would not have joined the National Military Service in order to placate him,” she says. 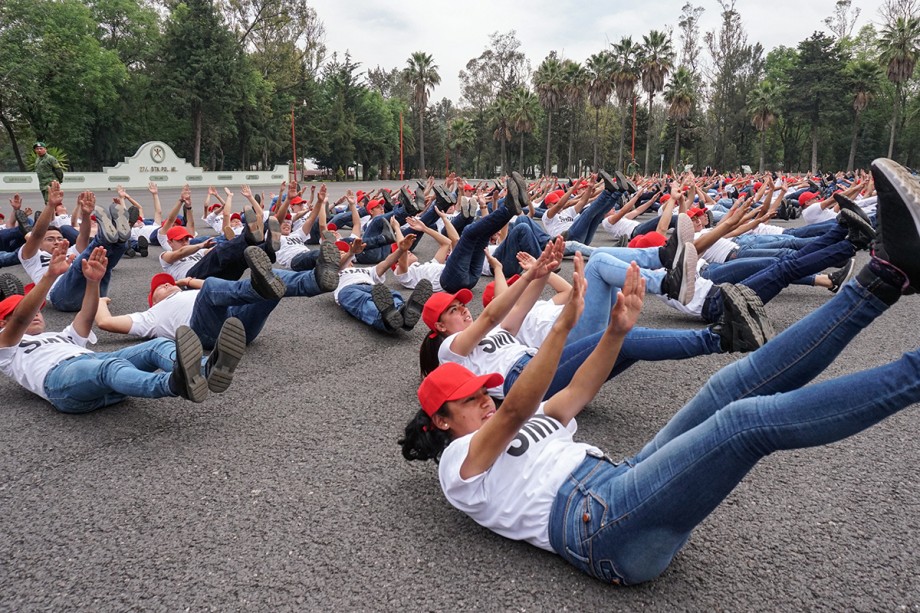 Members of Mexico’s National Military Service participate in physical and self-defense training activities. Women who enlist say they are treated differently than their male counterparts, particularly when it comes to physical training sessions.

Thania López, 29, joined in order to give something back to her country after falling in love with the cultural diversity she encountered on various trips through the civil association she works for. She says that biological differences between men and women play a role in performance.

“The basic [difference] was my period,” she says. “It’s not the same effort or capacity with that limitation. I don’t have the same strength as them. Sometimes they make us carry things and I see that I can’t because I can’t endure things.”

She adds that “breasts are a bit cumbersome.”

Despite these challenges, she says she would recommend the program to other women.

“It’s a new experience, new knowledge or reaffirmation of knowledge like values they teach you at your home or at school. I like that a lot,” she says.

García Ramírez says the presence of women in the National Military Service is important.

“The integration of women into [NMS] activities elevates the level of competition, he says. “People can think that efficiency levels fall, but, on the contrary, they rise.”

Flores says for her, it is happy news.

“With this decision, they are bringing down a little the stereotypes of involving women more,” she says.

López jumped with excitement when the information came in. But she says that they should have given women access to the military ID card a long time ago.

“That they didn’t recognize us at the same level made me think that they underestimated us,” she says.