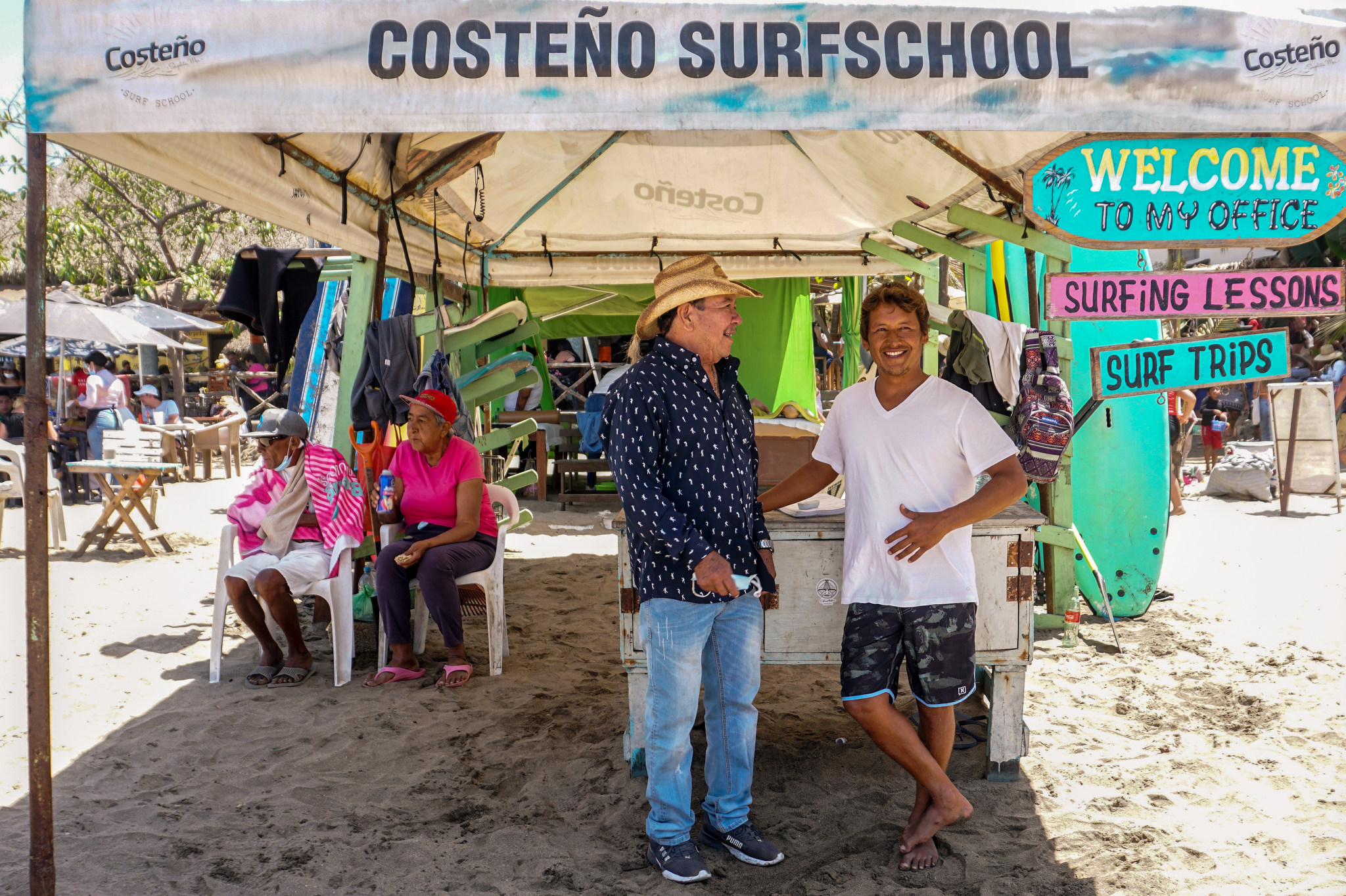 SAYULITA, MEXICO — It is 10 a.m., and Bryan Sandoval and his little cousins parade down a hill from his home to the beach. As they ply narrow cobblestone streets framed by lush flora and colorful houses, they laugh and play and wave to neighbors. They all carry surfboards.

At the beach, they stand before the ocean, eyes on the waves. And when the time is right, they leap onto their boards and into the sea.

Lean and agile, Sandoval, 16, glides over the first wave, rising for a 360-degree flip in midair.

“If you want to let off steam, you enter the sea and disconnect,” Sandoval says. “You enter a place where you are constantly having fun, [where] you feel good. The sea generates very nice sensations.”

Sandoval is a national surfing champion in the 15- and 16-year-old youth category, having won a gold medal during the 2019 National and Youth Olympics, the first time Mexico included surfing in the games. With only four competitors, the surfing team from the state of Nayarit, on the Pacific coast in west-central Mexico, finished third nationally.

“I didn’t think I would get to this point, but I managed to overcome myself and be among the best in Nayarit,” Sandoval says. “My whole family said surfing didn’t take you to anything, but I showed them it did.”

Sandoval symbolizes how surfing has transformed the town of Sayulita, a poor coastal village of 3,390 in Nayarit. The sport has spawned champions, drawn tourists, launched a surfing school industry, reshaped the town’s identity and given its children and teenagers hope.

All of this has blossomed organically – and against the odds. Historically, a host of challenges has thwarted surfing’s progress in Sayulita – from a lack of access to surfboards to sometimes-cynical townspeople to a dearth of the resources required for competitions. 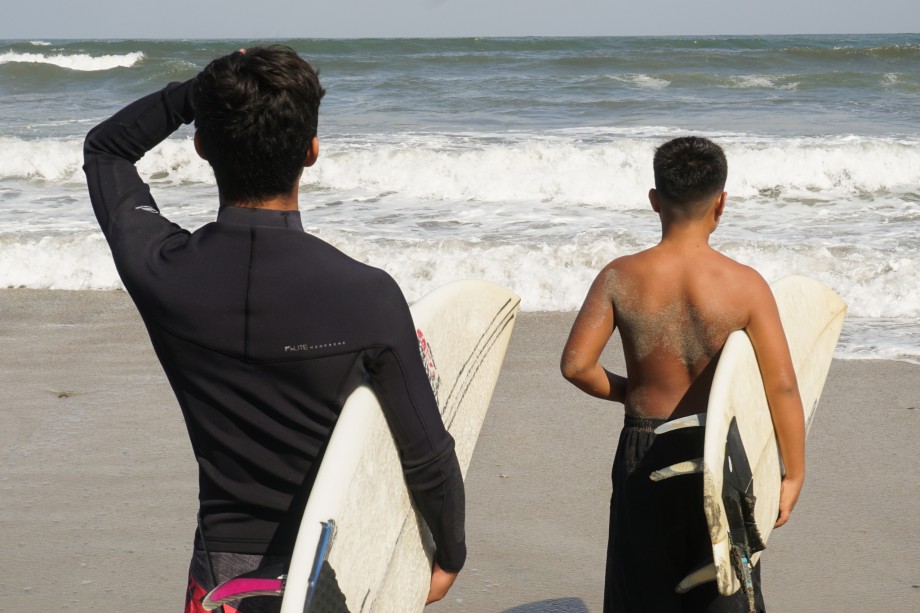 Diego Cadena was 17 when he began his professional surfing career. He funded his surfing through fishing before a sponsor picked him up.

“At the beginning, it was not easy,” says Cadena, 39, a son of fishers and one of Mexico’s most renowned surfers. “I had to leave school to work and finance my expenses because there was no other way.”

Before it became a hotbed of surfing, Sayulita was known for fishing, farming and cattle ranching. Residents also built palapas, open-sided structures with thatched roofs made of palm leaves, and extracted coconut oil for soaps. The town has always been a strategic point for regional commerce.

Not until the 1960s, when the sport boomed in California, did the first surfers arrive.

Children of fishermen were the first to ride the waves. At that time, they lacked proper equipment, so they used anything from wooden planks to palm leaves.

“Even the boards of the bed, we used to cut them with axes, and it was your board to run waves,” says Gabriel Ponce, 56, who now runs a tourism business. 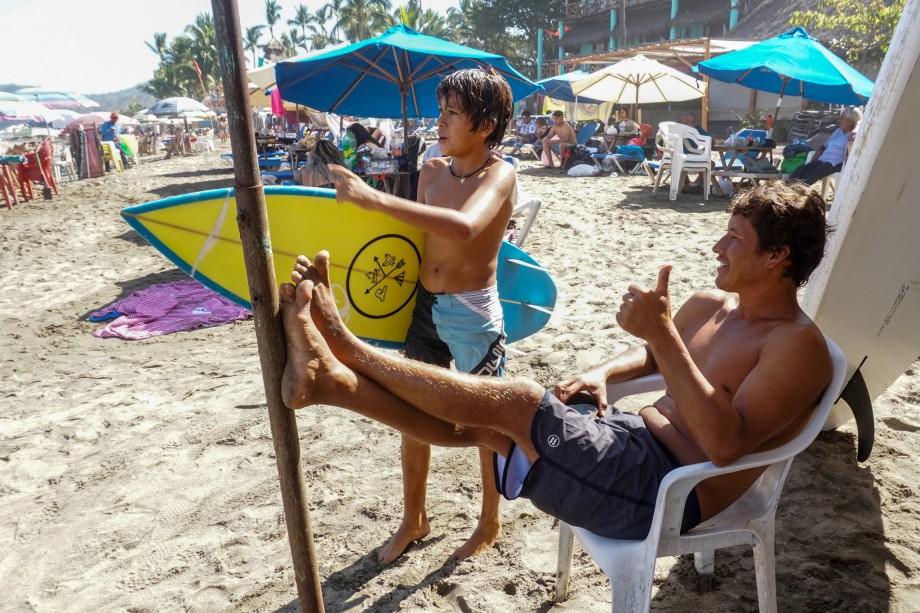 Adrián Rodríguez, a legendary surfer, and Yojan Hernández, who is learning to surf, watch their friends in the ocean.

Ponce says his business has thrived in part because people come to Sayulita for surfing, then discover that he offers snorkeling, sport fishing trips, and tours of the uninhabited Marietas Islands, a few miles off the coast. He started 20 years ago with four boats. Today, he has 30.

When the first generations started surfing, Sayulita locals were skeptical, says 69-year-old Guillermo Rodríguez, owner of the oldest restaurant in town. “We used to say they were crazy because we had never seen people surfing, but we now have world champions.”

His father opened the eatery in 1960 as a bar, and it used to close at 5 p.m. At the time, there were no lights in town.

Now it’s a full-fledged seafood restaurant that’s open all day and usually abuzz with customers. Surfing has attracted tourists, which in turn has buoyed his business, Rodríguez says.

“Thanks to [the surfers], we have been growing because it is a very nice attraction,” he says. 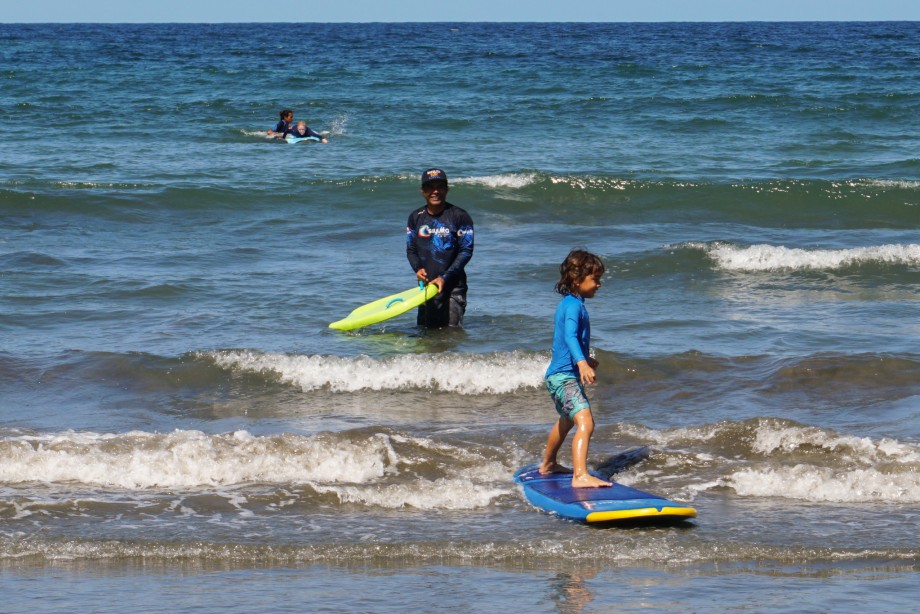 Surfing occasionally ignites tensions. A year ago, there was talk of building a pier in Sayulita, but residents opposed it because so many of them have children who surf, says Fidencio Ramos, a retired fisherman.

“I have my daughters who surf,” he says. “If they build a pier, they will go surfing who knows where.”

On any given day, Sayulita’s smooth-sand shores thrum with activity. Surfers, sunbathers, boaters, street vendors, traditional dancers and others mix amid a vivid jumble of surfboards and beach umbrellas. Children and adults play together in the brilliant blue waters.

Many young people come to the beach alone or in groups to meet their surfing instructors. In recent years, six professional surf schools have opened, all run by former top-flight surfers, says Adrián Rodríguez, 34, who has represented Mexico in four world surfing championships.

The sport has become a refuge for some of the town’s children, who battle a long list of woes – from poverty to boredom to unstable homes.

Champion surfer Patricio González and his brother, Sergio González, opened a surfing school in 2009, and they offer free instruction to children. More than 200 youth have learned at the school.

Carlos García, 19, far left, learned to surf when he was 9 at a school owned by Sergio González and his brother, Patricio González. Now, García works at the school.

Joana de la Rosa, 33, one of the few female surfers in town, says she notices that sometimes children “arrive and sit [on the beach], and we realize that they have problems at home, and what we do is give them a board so they can get into the sea. They come out very happy.”

María Rangel, a street vendor, sees surfing as a welcome distraction for her son, Jesús Rangel, 12. In 2018, his family came to Sayulita to flee violent crime in Apatzingán, in the state of Michoacán, about 650 kilometers (403 miles) to the southeast. The boy began surfing in August 2019. To help the family survive, Jesús and four of his eight brothers sell flowers daily in town.

He likes to surf in the afternoons, but his family’s strained economic situation keeps him from practicing as much as he would like. Still, he is learning. A local surfer gave him a board, and Felipe Rodríguez, a legendary Sayulita surfer who owns one of the surfing schools, teaches him. Another surfer takes him to neighboring beaches to practice.

“I’m very happy that my son likes sports, so he doesn’t waste time on other things,” Rangel says. “So he doesn’t pick up vices.” 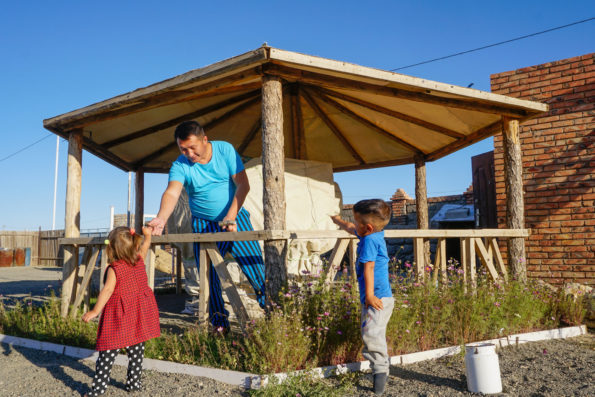