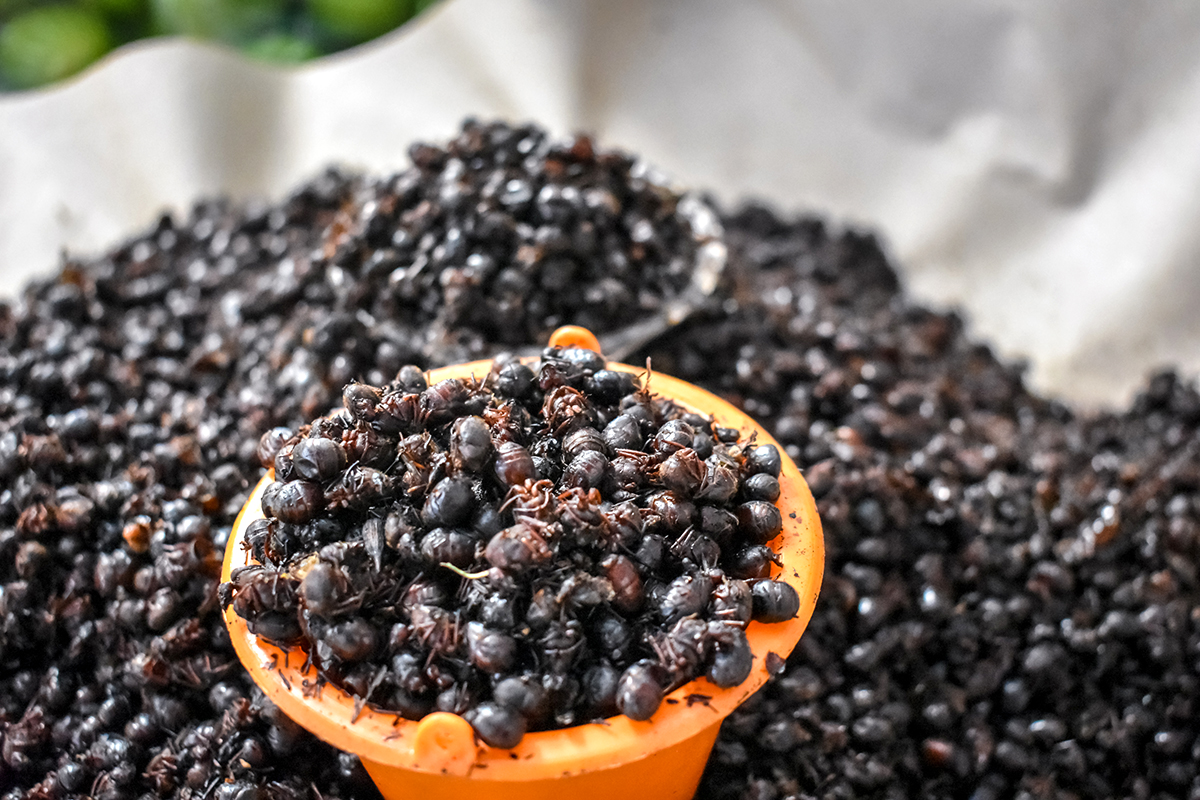 TUXTLA GUTIÉRREZ, MEXICO — During the rainy season, the kitchen of Blanca Estela Sarmiento, 61, fills with smoke, and with a special aroma: the aroma of toasting nucú, the local name for flying ants, otherwise known as chicatanas.

“Everyone likes to eat nucú,” she says. “When the rainy season starts, the season for selling nucú also starts.”

Sarmiento’s relationship with nucú extends beyond her home kitchen. She has a small stand in one of the public markets in Tuxtla Gutiérrez, in the southern state of Chiapas, Mexico.  Here, she sells small containers of grilled or toasted flying ants to people at a price of approximately 20 pesos ($1.10) for 100 grams (3.5 ounces) of nucú.

“I have clients that come every year and buy two or three containers per week from me. They always look for me because they like how I season them, and that I only put a little garlic, lemon and salt on them,” she says. 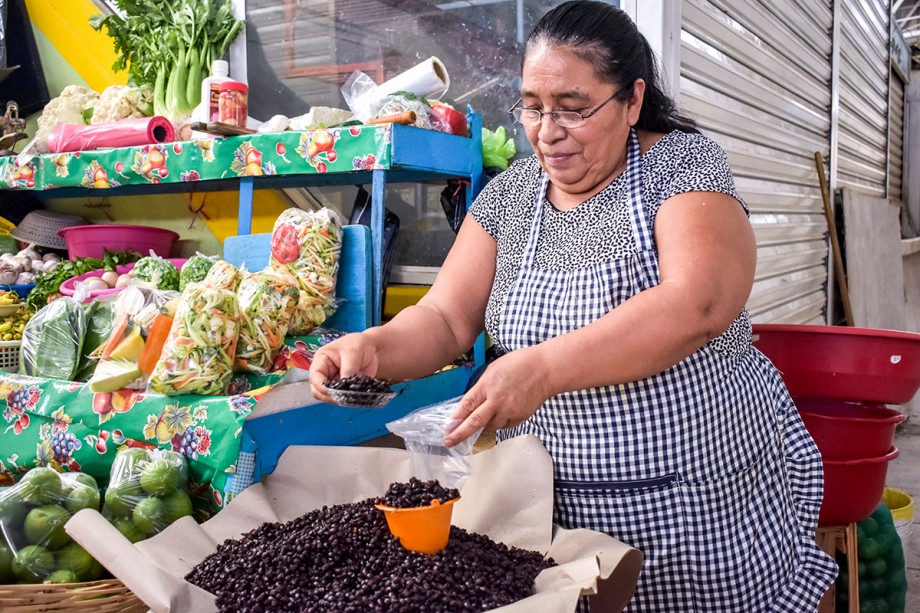 Blanca Estela Sarmiento measures nucú into a plastic bag at Mercado Público 5 de Mayo, in the city of Tuxtla Gutiérrez.

During these summer months, the local gastronomy in the center of the state of Chiapas is enriched with the collection of nucú.

The ants are toasted and then eaten. Some people still collect and toast them in the traditional manner, while others purchase them from markets or restaurants that offer them as appetizers, as tacos or as ingredients on pizzas.

Nutritional and tasty
Sarmiento says that when she was a child, her parents taught her how to collect, season and toast nucú to achieve just the right flavor – which some say is similar to pork rinds – while also possessing a crunchy texture.

To collect nucú, Sarmiento would accompany her mother to the edges of San Fernando, the small village where she is originally from, about 25 kilometers (about 15 miles) from the city of Tuxtla Gutiérrez.

“Nucú used to be found everywhere,” she says, adding that over the years, collecting the flying ant is becoming more difficult. “We would go to the parks – empty lots – in the parks, but now it is only in the mountains. It’s because almost everything is cement now.”

Now, it’s necessary to travel to more distant locations, usually into the mountains, in order to locate the nests and collect the insects.

Mexico has 531 species of edible insects, according to the 2009 publication “¿Los Insectos Se Comen?” by Julieta Ramos-Elorduy B., a former researcher at the Universidad Nacional Autónoma de México. The state of Chiapas is home to 155 of those edible species.

Around the world, people eat more than 1,900 species of insects, according to a 2013 fact sheet on the contribution of insects to food security, livelihood, and the environment from the Food and Agriculture Organization of the United Nations. Given that many insect species are packed with protein as well as number of vitamins and minerals, according to Ramos-Elorduy B., this number is no surprise. 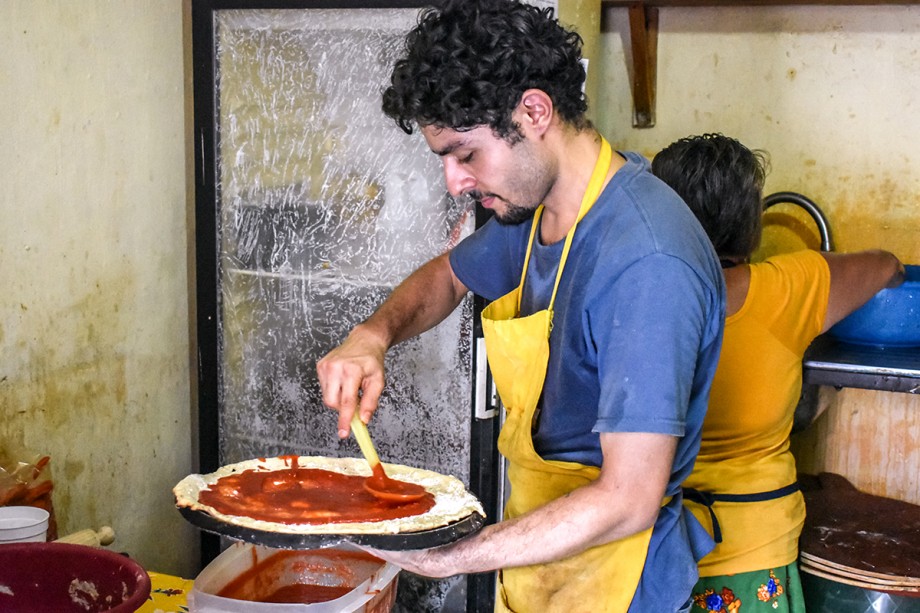 Francisco González, an employee of Palermo Pizzas, spreads tomato sauce on pizza dough. The pizzeria is known for its unique ingredients, including nucú. Gonzalez says during the summer season, nearly 20 percent of Palermo Pizzas’ orders include nucú.

For Sarmiento, nucú is as sentimental as it is nutritious. She remembers well the time when the first rains motivated families to collect their ants and prepare the delicacy themselves.

“We brown it in a clay comal with quebracho wood, which makes solid embers,” she says. “The little animal is browned with a gentle, pure fire so that it doesn’t burn because, if not, the nucú gets bitter and it’s no longer tasty. The people here, they know when it’s raw, when it’s burned.”

Pepperoni pizza, with extra nucú
Over the years nucú has conquered many a dish. With its arrival on restaurant menus in Tuxtla Gutiérrez, more people are seeing the commercial potential of the insect.

“It was a traditional food, customary, that used to only be eaten alone or with tortillas and salsas,” Sarmiento says. “Now there are restaurants that even offer it as a snack.”

By offering nucú as a pizza topping, Palermo Pizzas, a restaurant in Tuxtla Gutierrez, is a prime example of the pathways the flying ant has forged within Chiapa’s culinary scene. Edgar Torres Mendoza, who manages the pizzeria, says that the nucú pizza joins two local consumer passions.

“The Tuxtleco (a person from Tuxtla Gutiérrez) loves pizza and by adding nucú, an element of the local food that is also very appreciated by the population, this pizza has become a success. There are people who only come during this season to buy nucú pizza,” he says. 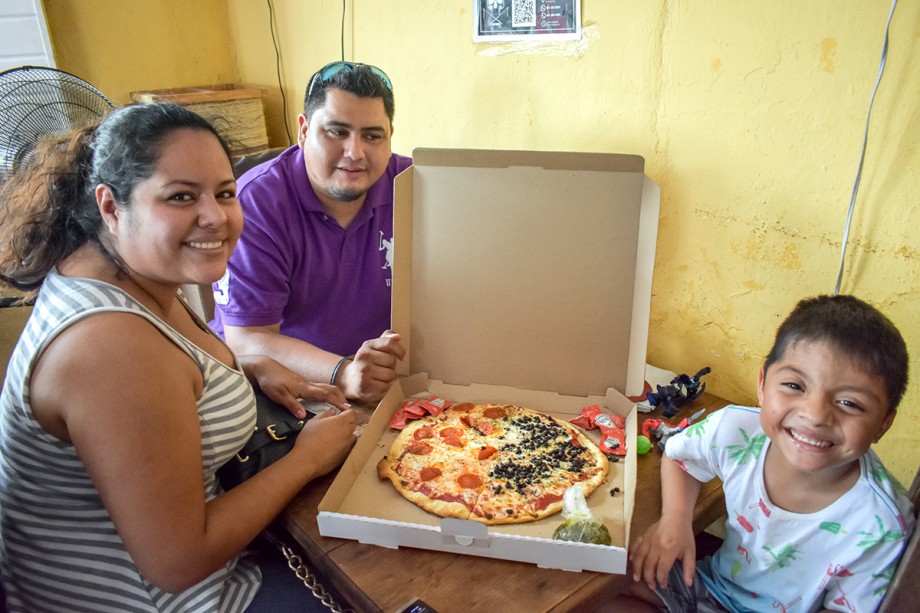 Citlaly Torres, Rodrigo López and their son Diego López display their pizza, from Palermo Pizzas, before digging in. The family says they eat it every year.

This restaurant has offered the combination of flavors since 2015, and employees say that during nucú season, nucú pizzas represent nearly 20 percent of the orders for the month.

Torres Mendoza believes that nucú pizza is a way to reach other types of palates, to invite people to try other types of flavors as well as innovate with traditional food ways.

One of the great challenges, he says, is making the flying ant available in other parts of Mexico, because of its temporary nature.

“You can only find nucú during the rainy season and, for that reason, it can’t be a permanent element on our menu,” he says. 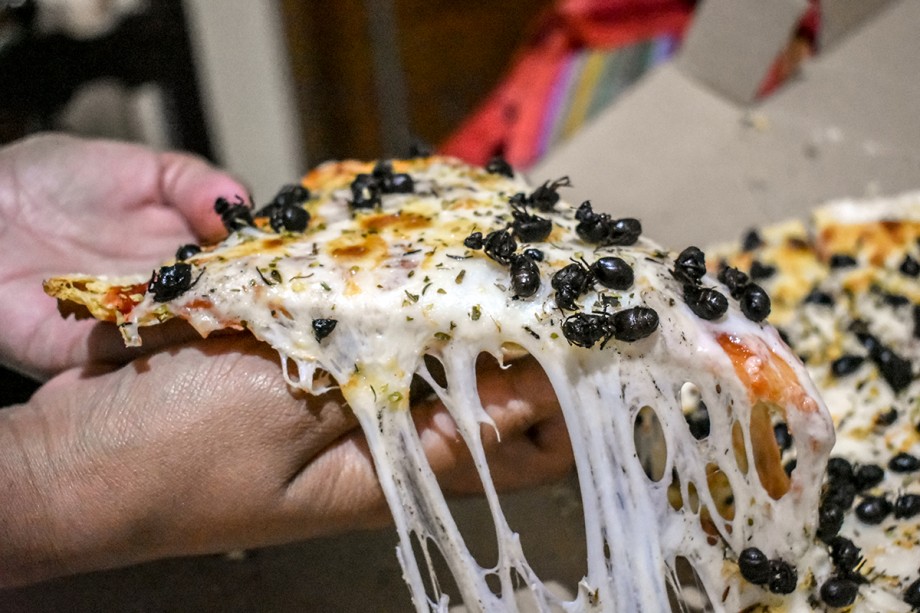 Every bite of a nucú pizza is packed with protein, flavor and tradition.

Torres Mendoza thinks that perhaps people should seek out mechanisms to breed nucú and not just collect it, which could also generate another type of employment for the locals while helping them to achieve a diet that incorporates more proteins, minerals and vitamins.

“Nucú shouldn’t only be collected, but also bred,” he says.

For Rodrigo López and his family, nucú is a common ingredient in their diet during the rainy season.

Citlaly Torres, López’s wife, says that her family likes the taste of nucú in addition to the fact that it has nutritional value and aids in the proper development of children.

López says that he and his family buy and eat nucú every year without fail.

“We like nucú, my kids like nucú. They have learned to eat nucú through us. They eat it with tortillas, with quesadillas, with tostadas, as a snack, just the ant and now even on pizza,” he says. 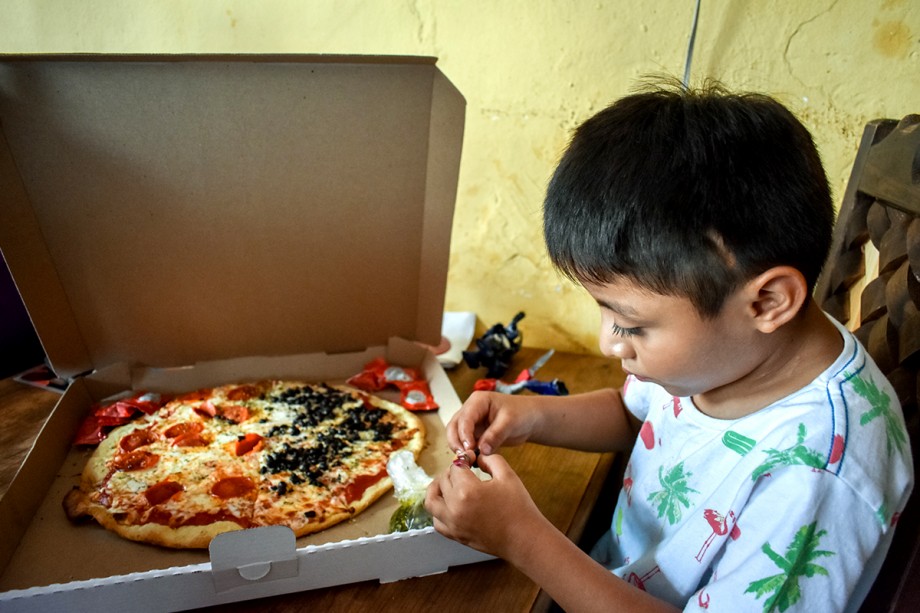 Diego López, the son of Rodrigo López and Citlaly Torres, squeezes a nucú between his fingers.