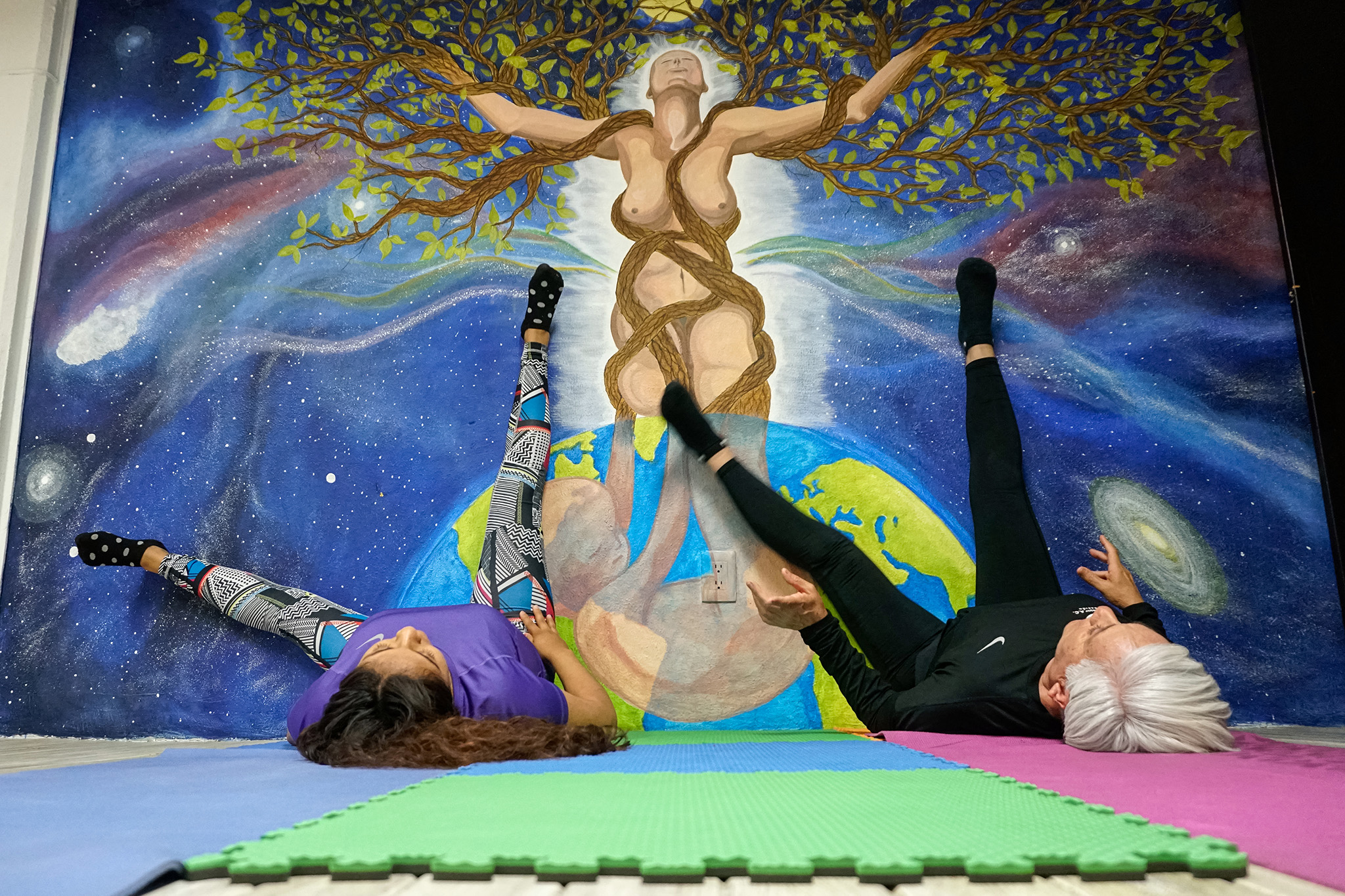 HIDALGO, MEXICO — Daniela Hernández, 19 and pregnant for the first time, stretches and bends using an exercise ball beneath a 2-meter (6.5-foot) mural depicting a woman wrapped in branches emerging from the earth.

Hernández and her doula, Yólotl Guerrero, have the large room to themselves. Their talk is easy and relaxed, more like a couple of friends than instructor and student.

“At 19, it’s hard to accept that you’re going to be a mom,” says Hernández, who is five months pregnant. “There are questions and fears, especially in the middle of a pandemic.”

Today women such as Hernández use doulas and midwives to provide support that was almost unheard of years ago in Mexico. Guerrero’s help is supposed to ensure that Hernández’s birth experience is free of the emotional and physical trauma that was once routine for many women during delivery.

Their partnership is part of a quiet revolution that has slowly taken hold in the country, where many doctors and nurses were known to ridicule, scold, insult and otherwise humiliate patients when they gave birth.

“Women need information and support during pregnancy in order for them to achieve a fulfilling, healthy and satisfactory birth,” says Guerrero, founder of Fundación Nacer Mejor (Born Better Foundation), a nonprofit in the state of Hidalgo that advocates for respectful treatment of women during childbirth.

She adds, “I’m convinced that this lowers the incidence of obstetric violence.”

Obstetric violence has emerged as a crucial battleground in Mexico’s women’s rights movement.

In Mexico, more than 33% of respondents ages 15 to 49, who had given birth, reported in 2016 that they had suffered obstetric violence in the previous five years, according to the National Survey on Home Relationship Dynamics.

Women reported that during labor, doctors ignored their wishes, pressured them into decisions, refused to consult with them, withheld information, declined or delayed medication, and inflicted physical pain as punishment.

Both patients and physicians once accepted such behavior. Only in recent years have some states made obstetric violence illegal, and a federal law is pending.

“Many believe that only an omission of service or a clear incidence of negligence that leads to death or irreparable harm is reason for a complaint,” says Rincón, who in 2016 took part in the campaign to outlaw obstetric violence. 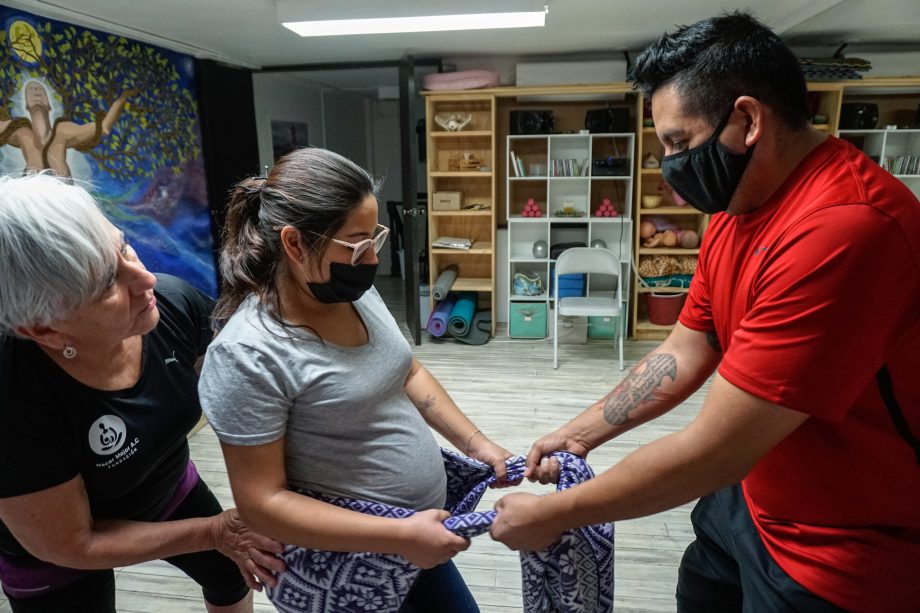 Karen Arévalo and Mauricio Gómez attend information sessions on pregnancy and childbirth with doula Yólotl Guerrero. Four years ago Arévalo says she had a traumatic birth process. This time she sought the help of a doula to calm her anxiety and fear as her delivery date approaches.

Rincón drew attention to this type of abuse in the late 1980s. Back then, she was 28 and went to a private hospital in Pachuca, Hidalgo’s capital city, to deliver her first child. Doctors induced labor through medication, then forced her to have an emergency cesarean section, she says. She lost the baby.

Three days later, she returned to the hospital in searing pain. Surgeons had to remove her uterus, fallopian tubes and ovaries.

Rincón sued. The physician in charge was suspended for six months – highly unusual at the time – and the case ultimately won worldwide attention. It became a watershed moment for Mexico’s women’s rights movement.

Today, Hidalgo, 152 kilometers (94 miles) north of Mexico City, has become the unofficial epicenter of the fight against obstetric violence. Fundación Nacer Mejor is part of a network of independent midwives, activists, doulas and other women here who joined forces five years ago to raise awareness through workshops for medical professionals.

They share facts about patient rights and let pregnant women know about the importance of physical and emotional support. They also promote legal initiatives related to sexual and reproductive rights.

Their work has begun to pay off. The Dr. Columba Rivera Osorio General Hospital in Pachuca, which has focused on addressing obstetric violence, reports that in the past year C-sections have dipped 7%, and successful lactation – in which mothers are able to breastfeed their babies for at least three months – has soared by 60%. The hospital says it hasn’t received an official complaint about obstetric violence in five years.

María López says doctors pressed her to have a C-section after a routine exam in her 36th week of pregnancy.

“They didn’t allow my husband to stay with me,” says López, who gave birth to a boy in March. “I didn’t understand why the C-section was necessary. They just took me into surgery.”

Meanwhile, Paola Martínez, 41, has teamed up with Ami Rivera, a midwife who lives in Hidalgo and attends to women there. When Martínez had a C-section late last year, Rivera was with her.

It was actually Rivera who suggested the C-section, after an ultrasound found that the baby’s amniotic fluid was decreasing. Martínez’s doctor agreed, then allowed Rivera into the delivery room, which is unusual in Mexico.

She made sure that the process was respectful.Paola Martínez, 41, on using a midwife

Martínez had several wishes: She wanted to listen to music during the birth, immediately hold her newborn with the umbilical cord still attached, and deliver the placenta. With Rivera at her side, the medical staff honored them all.

“She made sure that the process was respectful,” Martínez says.

Dr. María del Rocío Ávila, a consultant in obstetrics and gynecology at the Dr. Columba Rivera Osorio General Hospital, says that when she was in medical school, instructors taught students to treat pregnant women with disdain. “These patients are hysterical and don’t know what they want,” she recalls her professors saying. They taught that doctors are in control, she says.

Only recently have such attitudes begun to fade, Ávila says.

These days, she says, the coronavirus crisis makes it harder to connect face-to-face with pregnant women. At her hospital, she and a colleague support women using WhatsApp groups.

Energetic and confident, Hernández wanted a doula because she heard so many stories about obstetric violence. She sees Guerrero once a month because of coronavirus concerns, but between visits, they stay in touch with phone calls, WhatsApp messages and video calls.

They talk about issues such as how to avoid COVID-19, the disease caused by the coronavirus, in the hospital; how to stay healthy throughout her pregnancy; the signs of early contractions and what to do if her doctor resists Hernández’s requests during delivery.

At first, Hernández says, she was nervous about having a baby. Now, relaxed and smiling, she occasionally caresses her belly when she talks about her pregnancy.

Her doula has put her at ease.

“It was the best thing I could have done,” she says. “Now I know that I must trust my body and expect respectful treatment for me and my baby.”