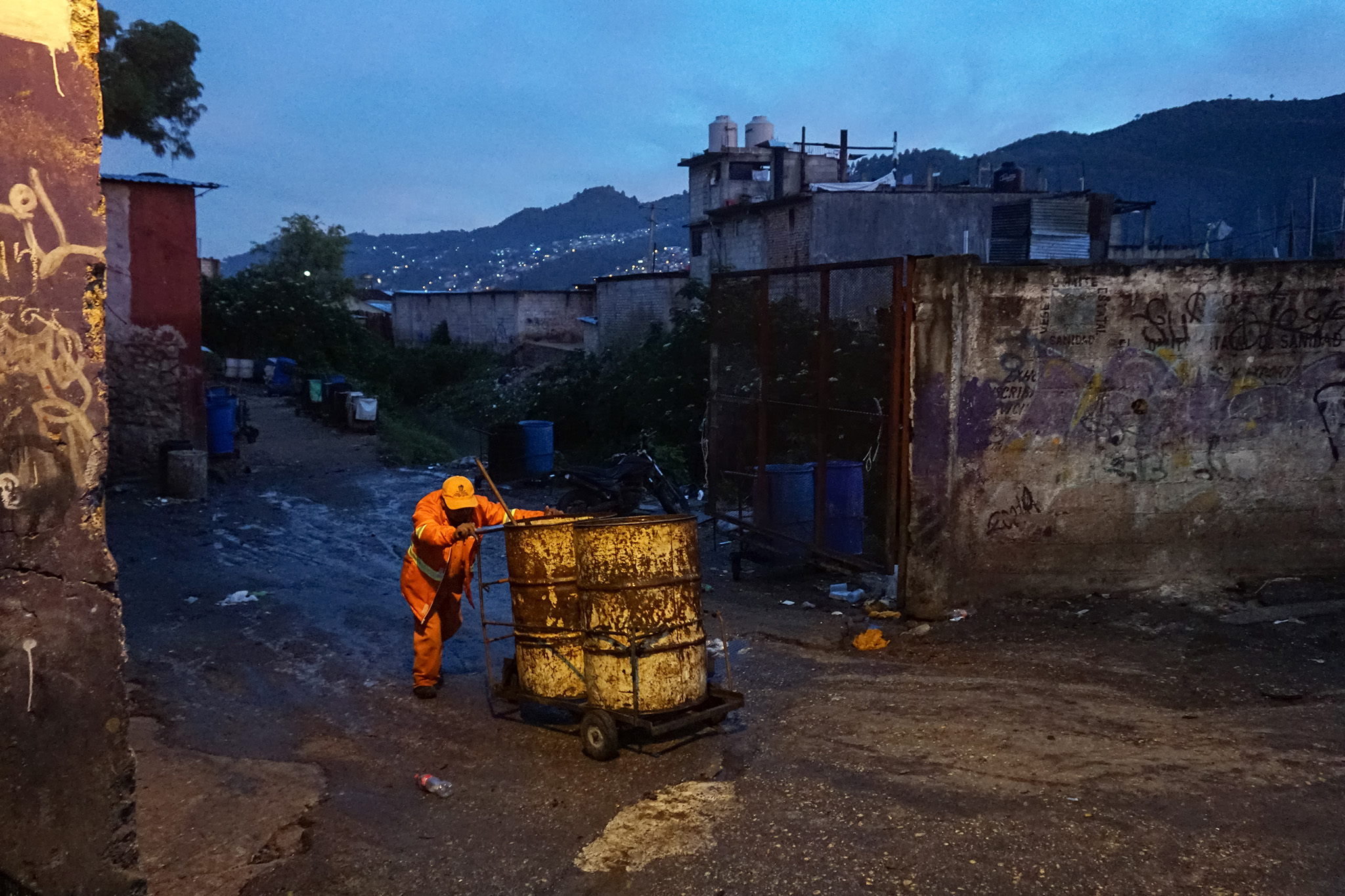 But not all residents heed the call.

“In some places in the city, the sound of the bell is not respected and residents take garbage bags out to the street, creating pollution hot spots,” says Gabriela Viveros, a 50-year-old mother of two who lives in the city’s Real del Monte neighborhood.

Viveros says the people of San Cristóbal de Las Casas haven’t been educated about how to manage garbage or properly separate waste. Most importantly, she says, they don’t realize that what some consider trash may have value for someone else.

The lack of education about proper waste disposal – and the benefits of recycling – has been aggravated by political infighting in Chiapas state.

In May 2019, a dispute between communities and municipal authorities in San Cristóbal de Las Casas ignited the waste problem. Citing broken campaign promises, residents blocked 15 of 24 garbage trucks and prevented them from operating for about 15 days. This made waste collection in the city slower and less frequent, says Sergio Gómez Santiz, director of municipal sanitation.

But Gómez Santiz says part of the population maintained the habit of taking garbage bags out, regardless of whether the removal trucks came by. Garbage bags piled up in the streets. Stray dogs tore them open and created a stench in neighborhoods. 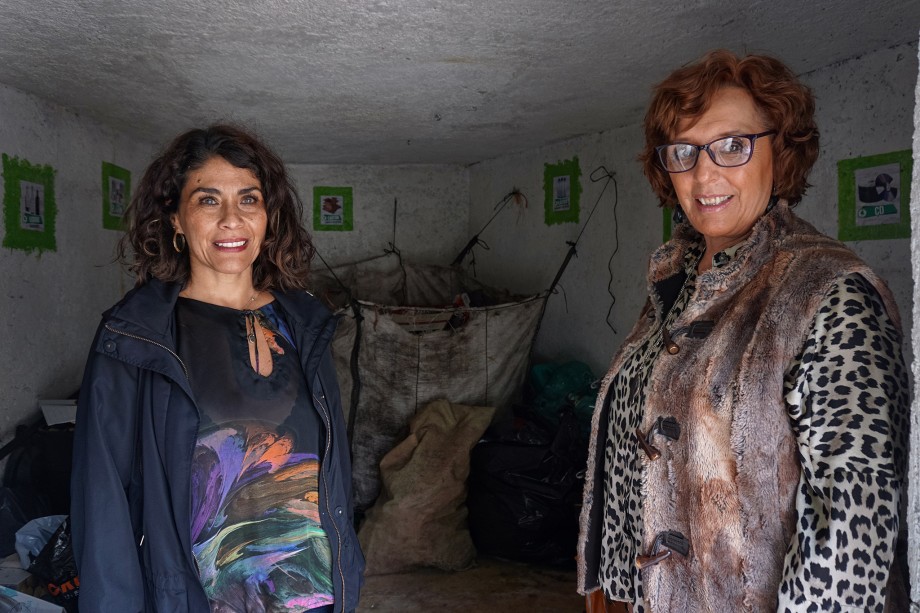 Gabriela Viveros and María Lourdes Suarez lead a community recycling program in San Cristóbal de Las Casas, Mexico, which encourages people to determine what garbage they can reuse and educates them on how to properly dispose of the rest.

But this challenge isn’t unique to Mexico, and countries across the world are bracing for huge increases in garbage and fewer ways to get rid of it in coming years.

According to 2018 World Bank estimates, cities around the world generate about 2 billion tons of solid municipal waste each year. If nothing is done, that figure will grow to 3.4 billion tons by 2050, a 70% increase.

According to data from the Ministry of Environment and Natural Resources, Mexico generates more than 44 million tons of waste a year and, according to its own estimates, the country will hit 65 million tons a year by 2030.

“The actual site for garbage from San Cristóbal de Las Casas is a sanitary general landfill about 10 kilometers (about 6 miles) from the city that receives around 260 tons of waste a day,” Gómez Santiz says.

But even before the garbage strike hit, some residents had begun to innovate solutions to the town’s waste disposal problem.

In 2018, residents of the Real del Monte and Kaltic subdivisions organized and implemented their own waste management system. Theirs requires the separation of organic, inorganic and recyclable materials, says Viveros, a member of the neighborhood board created to implement this approach.

Adriana Rodríguez Frutis and María Lourdes Suárez, who promote the system, say it includes raising awareness around the proper disposal of waste and training to handle organic materials through projects like urban composting. The project also included a search for businesses that recycle. 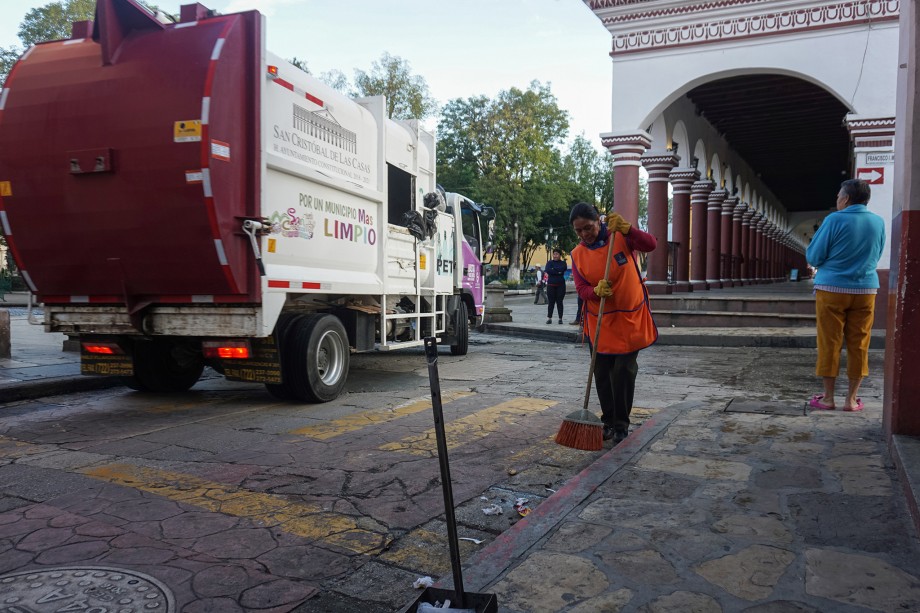 A sanitation worker in San Cristóbal de Las Casas clears garbage from the streets. Residents endured weeks of stench and pest problems earlier this year when a clash with local politicians resulted in a garbage-collection strike.

Rodriguez Frutis says families who participate in the program produce less waste than the average home, since they use up to 60% of what others consider “garbage.”

Angélica Schenerock, member of the organization Water and Life, Women, Rights and Environment, says any solution to the waste problem must include an efficient, government-run collection and treatment program–and all residents should be encouraged to help.

“It’s not enough to separate and recycle waste, but consumption habits have to change, and people have to stop generating so much waste,” Schenerock says.

For Luz del Carmen Silva, a resident of the Kaltic area and participant in the system, success depends on changing consumption habits.

“We’re bombarded by advertising that tells us to buy, buy, buy, and that product is often made of or wrapped in plastic,” Silva says.

Silva says that before buying she asks if she really needs the product and, if she buys it, she makes the most of it, recycling the waste it generates.