Skip to main content
The story you are reading was published on Saturday May 4, 2013. To read more recent stories click here. 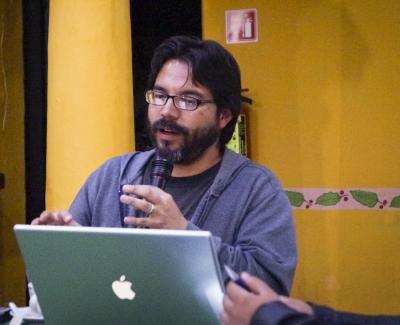 SAN CRISTÓBAL DE LAS CASAS, MEXICO – Luis Alberto Gómez Martínez, 28, needs the Internet to study and to work. But he cannot afford to pay for Internet at home, so he has to go to the public library in the center of San Cristóbal de las Casas, a town in Chiapas, Mexico’s southernmost state.

“The Internet is expensive,” says Gómez, who studies at the university level and works at a local company. “More resources are needed in order to sign up for it and to support the family. It would be a luxury in the house because of the cost.”

His wife, Estela Guadalupe Bermúdez Gómez, 29, says she does not use the Internet at the library because she is busy at home with her domestic duties and taking care of their three children, ages 6, 4 and 2. But if the family had Internet access at home, she would use it to help their children with their schoolwork and to learn new things.

Because the family cannot afford Internet at home, her husband says a new campaign for free Internet is crucial. Citizens behind the campaign in Chiapas must obtain 40,000 signatures to present their initiative to the state Congress this year.

This initiative is the first of its kind in Mexico, thanks to a constitutional reform of Article 71 of the Mexican Constitution in October 2012. The reform lets citizens submit initiatives backed by signatures of .13 percent of the federal electorate to Congress.

The national campaign managed to gather 127,000 signatures in 20 cities before the Mexican Congress approved it on April 30. In Mexico’s legislative process, the initiative now goes to the state legislative bodies.

“The initiative seeks better compliance with the obligations of the State to guarantee the right to information and of freedom of expression, through free access to the Internet,” the initiative states.

The goal of free Internet access is to generate more equality, with an emphasis on students and marginalized communities.

“Giving free access to the network is a way of balancing the economic, social and political divide that exists in Mexico,” the initiative states.

The initiative includes the creation of a free public Internet network nationwide. Users would be able to access broadband Internet from anywhere with free navigation up to a certain data limit.

A group of communicators and journalists in Chiapas is now trying to gain approval of the legislation in the state Congress. In its first meeting in San Cristóbal de las Casas on April 4, members worked on a citizens’ action plan to draft an initiative that would consider the particular context of Chiapas, which has one of the largest indigenous populations in the country.

In June 2011, the General Assembly of the United Nations declared Internet access as a highly protected human right. The declaration requires member countries to prioritize providing Internet service that is accessible to all.

In December 2012, Mexico’s president and the three main political parties signed the Pacto por México to agree to elevate access to broadband Internet to a constitutional right.

Only one out of every 10 homes in Chiapas has Internet access, according to a 2011 survey on the availability and use of information technology by Instituto Nacional de Estadística y Geografía, the federal government’s statistical body. Less than 30 percent of the state’s population uses computers.

A group of citizens is finalizing the free Internet initiative in Chiapas, recognizing the relationship between freedom of expression and access to information and Internet access.

Ángeles Mariscal, a member of the campaign in the capital of Chiapas, Tuxtla Gutiérrez, says there is currently a deficiency in the exercise of these rights. She mentions a withdrawn bill that aimed to restrict Internet use in Chiapas last year.

Leonardo Toledo Garibaldi, a communication theorist who belongs to this group in San Cristobal de las Casas, emphasizes the aim of the initiative – the first of its kind locally, thanks to last year’s constitutional reform.

“[That] there is Internet access in Chiapas,” he says, “free, broad, diverse access that includes the technological access and relations of the Internet with human rights, and it is included in the Chiapas Constitution, taking advantage of a new law so that citizens can submit proposals without the necessity of political parties.”

Mariscal, a journalist and member of the Colegio de Comunicadores y Periodistas de Chiapas, an association of communicators and journalists in Chiapas, says that the campaign comprises communicators, journalists, members of universities, civil society organizations, citizens and the legal research institute at the Universidad Autónoma de Chiapas.

“We believe that the Internet is a human right and a necessary tool for the development of communities,” Mariscal says. “Recognition exists that the digital divide is a new form of inequality, because whoever has the tools to strengthen their access to information has more elements in order to have better development.”

Susana Pérez, a 26-year-old food vendor, says she does not use the Internet routinely because she never received training on how to use it. She is also afraid to seek help because she does not know where she would go to do so.

She cannot afford Internet at home.

If she needs to print school materials for her son, who is in primary school, she goes to an Internet cafe.

“In an Internet cafe, you pay 5 pesos per half hour,” Pérez says, the equivalent of 40 cents. “But sometimes, they give them daily homework, and you have to print it. It is like 11 pesos [90 cents] daily.”

She also worries about the lack of regulation at Internet cafes regarding pages with explicit content that children should not see.

Like the federal legislation, the state initiative aims to reduce the digital divide, to promote free Internet and to protect the private information of users based on the right to know, express and inform.

But María Gabriela López Suárez, a professor of intercultural communications at the Universidad Intercultural de Chiapas, says that to plan this initiative in Chiapas, it is important to consider cultural diversity and linguistics.

“Chiapas is a land of many lands with different ways of viewing life,” López says. “There are a wide variety of groups and mixture of cultures. It is important to take into account the needs and worldviews of the people.”

For example, Toledo says that browsers must be in native languages. Mozilla Firefox, in commemoration of International Mother Language Day on Feb. 21, enabled the translation of several indigenous languages, including Tzeltal and Tzotzil, the most spoken languages in Chiapas.

“This is a great advancement,” López says. “But the obstacle is how many people know how to read and write in their native language. There are many people who can only speak it.”

She proposes that citizens organize campaigns beyond technology.

“For example, literacy campaigns in native languages with the younger generations, campaigns against the discrimination of people who speak native langagues,” she says.

For the state Congress to accept this initiative, the group needs to gather 40,000 signatures, equivalent to 1.5 percent of residents of the state, which is the legal requirement. First, the group is developing its proposal to adapt the federal initiative to Chiapas.

“To pass it through Congress, we need to lobby for the passage and create the rules and mechanisms so that any citizen can access the Internet,” Mariscal says. “All this so that it is not a dead law.”

Toledo says that the goal is to benefit Chiapas’ diverse population.

“It is not a legal reform to benefit providers and urban centers, but to think about the human, ethnic diversity,” he says. “Access to large libraries, discussion spaces. It is not only a recreational access, but a space to exercise citizenship.”