Skip to main content
The story you are reading was published on Thursday December 4, 2014. To read more recent stories click here. 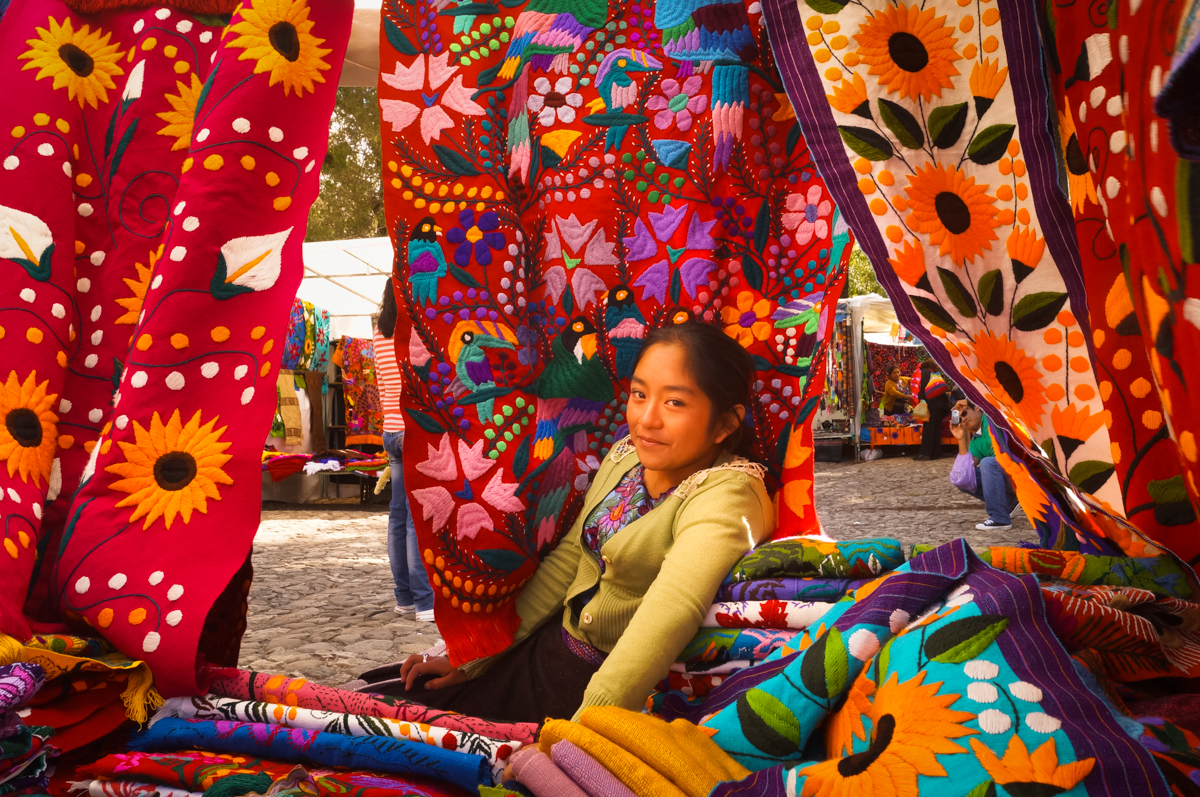 However, Ech, 19, does not style her hair with a braid and colorful ribbons in the traditional style of her hometown, Chenalhó, a municipality north of San Cristóbal.

Her father scolds her for failing to uphold this Tsotsil tradition.

“My father does tell me things, but I tell him that I do not like it, I do not know how to braid my hair,” she says.

Ech, 19, plucks her eyebrows. Her right ear is pierced. Her style, including her hairstyle, is modern, she says. She picked up new, nontraditional styles while studying in San Cristóbal for a year.

“I think girls change their way of dressing by living in San Cristóbal because they see other things, and they like them,” Ech says.

Though she styles her hair and wears makeup, Ech still upholds her people’s heritage by wearing the traditional clothing. But for her father, that’s not good enough, she says.

Ech’s cultural blend can be seen in many young indigenous women in the state who are departing from the fashions of their indigneous groups, she says.

While urban culture celebrates modern clothing, many indigenous women in Chiapas say they feel most beautiful in their traditional clothing.

However, young women in the state bridge cultures, combining traditional and modern styles, a trend that some older indigenous women disapprove of. It is important for indigenous women to express themselves through personal styles while preserving their heritage, they say.

Indigenous people make up close to 10 percent of Mexico’s population, according to the National Commission for the Development of Indigenous Peoples. Chiapas is home to the second-largest indigenous population in the country.

More than a million Chiapas residents – 27 percent of the population – are indigenous, according the most recent census conducted by the National Institute of Statistics and Geography.

Discrimination is the main problem facing indigenous groups in Mexico, ahead of poverty, lack of government benefits and language barriers, according to the 2010 National Survey on Discrimination in Mexico.

Influenced by racism, most Chiapas residents do not accept the natural beauty and dress of indigenous people, says Tania Cruz Salazar, a social anthropologist and researcher in gender studies at the San Cristóbal campus of the College of the Southern Border, a public research and higher education institution with campuses in various southern Mexican border cities.

Society imposes a mestizo ideal of beauty – a blend of European and indigenous heritage, says Cruz Salazar, who researched body perception and cultural racism for her doctoral dissertation.

Indigenous women are looked down upon for not conforming to that image, Cruz Salazar says.

Indigenous peoples – descendants of the Mayans, who populated the region before the Spanish conquest — extol physical qualities linked to reproduction, which contrasts with how beauty is perceived in Mexican advertising, Cruz Salazar says.

The Tsotsil appreciate robust women, says Margarita Martínez Pérez, 34, a Tsotsil woman who lives in Huixtán, a municipality about 30 kilometers (18 miles) from San Cristóbal. This includes having wide hips and thick legs, which signify health and fertility.

She considers conformity to the norms of the dominant culture a betrayal of one’s identity. Television induces young Tsotsils to turn away from their culture, she says.

Her handmade blouse, with a round neckline, is embroidered with colorful flowers. Her navy underskirt – called a tsekil – was sewn on a pedal loom; embroidered flowers form a cross at the front. Around her waist she wears a woolen sash— called a chukil —that was made on a back-strap loom.

“Any person belonging to a non-Western culture who wears their traditional clothing in any context of their life symbolizes pride and identity for their culture,” Martínez Pérez says. “It implies demonstrating to the world your heritage, your roots and the popularity of a place.”

However, she does make an effort to look a little modern.

Martínez Pérez, who wears subtle makeup, considers it a positive sign that many young women wear traditional garb even though they pluck their eyebrows or dye their hair blond or red.

“We also have the right to wear other garments, as long as we do not forget our origin, and we feel proud of our culture,” she says.

Martínez Pérez says she goes unnoticed in the city when she wears pants and other modern clothing but encounters discrimination when she wears traditional attire.

Once, while she was wearing traditional Tsotsil dress, a clothing store employee approached her to tell her the price of the item she was looking at. Because of the manner in which the employee looked at her, Martínez Pérez felt sure the employee was suggesting she could not afford the item – an act she interpreted as strongly discriminatory.

Juana López, 56, a Tsotsil woman who lives in Chenalhó, complains of the trend where younger women no longer want to braid their hair in the indigenous tradition. As soon as young Tsotsil women go to the city, they decide to dress differently, she says.

“The young girls no longer like their shawl outfit,” she says, referring to a distinctive element of indigenous garb. “Young girls have changed, and young boys have changed.”

Pablo Álvarez, a 20-year-old member of the Zoque indigenous group, comes from the municipality of Marqués de Comillas.

To be beautiful, she says, is to be oneself.

“I am going to be me, and I put myself together how I think is best,” she says. “I dedicate myself to being happy.”

The blending of indigenous and modern styles is healthy, says Karla Pérez Cánovas, an ethnologist who works with Malacate Taller Experimental Textil, a group that sells handcrafted textiles in San Cristóbal.

The company’s garments, while crafted on back-strap looms by weavers from Altos de Chiapas, or the Chiapas Highlands, are designed to appeal to urban mestizo women.

Indigenous women are now incorporating elements of the modern ideal into their own conception of beauty, Pérez Cánovas says.

“They redefine them according to their context and their way of seeing their own beauty,” she says.

These adaptations reflect a dialogue among diverse cultures. Women who embrace elements of other cultures are not caving in to cultural hegemony, Pérez Cánovas says. They are making a conscious decision.

Martínez Pérez, on the other hand, says she strengthens her cultural identity by wearing the traditional attire of a Tsotsil woman from Huixtán and speaking her native language. Such practices ensure the survival of cultures and language groups, she says.

“Fundamentally, it is to transmit and plant in youth and childhood the pride of belonging to a linguistic and cultural group, and that it distinguishes us from others,” she says.

Ech is not such a committed traditionalist. While she often wears Tsotsil clothing, she resists pressure from her father to braid her hair in the Tsotsil manner.

Her style includes other nontraditional elements. She plucks her eyebrows. She is wearing plastic hoop earrings, a conventional sweater and black sandals with modern gold trim.

She says she sees more and more young people adopting nontraditional styles. Even the design and production of traditional clothing are constantly influenced by other styles, she says.

GPJ translated this article from Spanish.