Skip to main content
The story you are reading was published on Tuesday February 2, 2016. To read more recent stories click here. 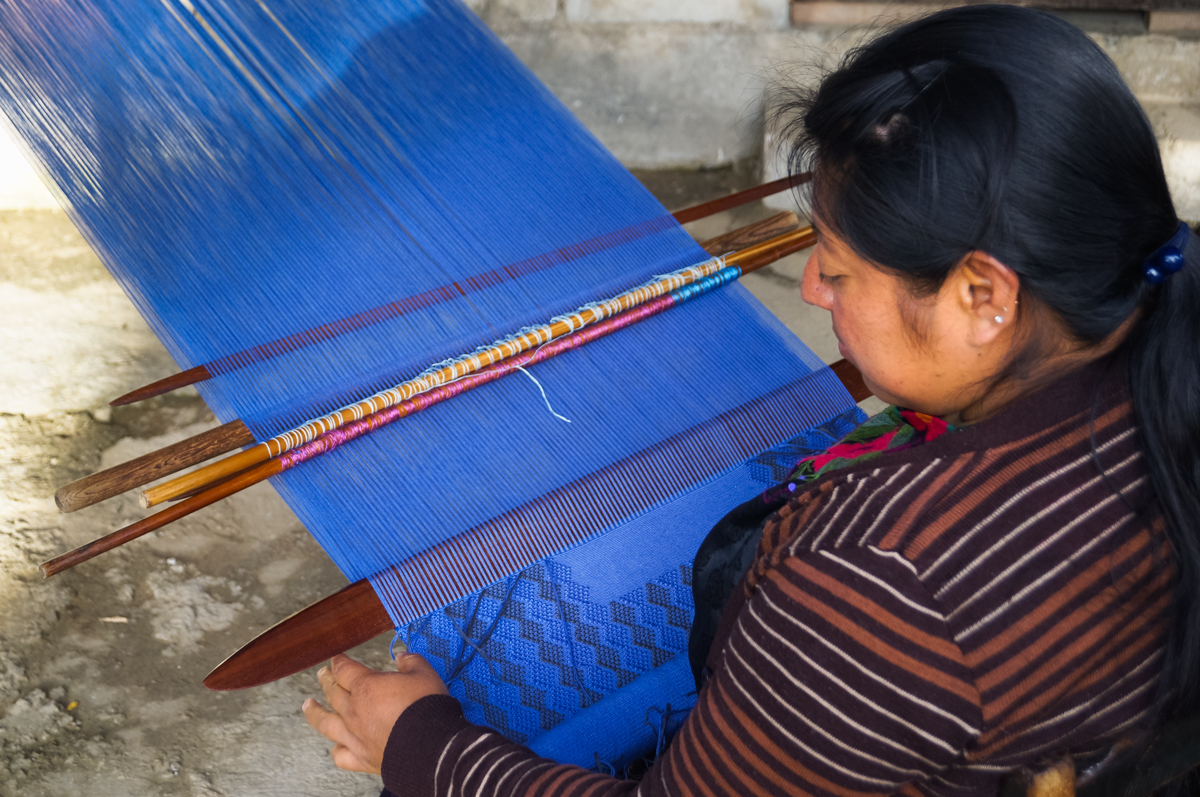 ZINACANTÁN, MEXICO – In a room packed with thread, fabric and embroidery, Yolanda Hernández Gómez moves from one side of the room to another to supervise the work of other artisans. She pauses for a careful review of the brocade another artisan is weaving.

“This fabric will be a handbag,” Hernández Gómez says.

The 29-year-old designer and artisan from Zinacantán, a municipality in the southernmost Mexican state of Chiapas holds the fabric in her hand, which she says was made using ancestral techniques on a backstrap loom.

Weaving is a common skill in southern Mexico, and indigenous women often use traditional techniques passed down from their ancestors, Hernández Gómez says. Locals wear clothes made using those techniques, and tourists often buy the garments, she says. But that means the local weaving industry is competitive, especially as foreign goods make it into the local markets. 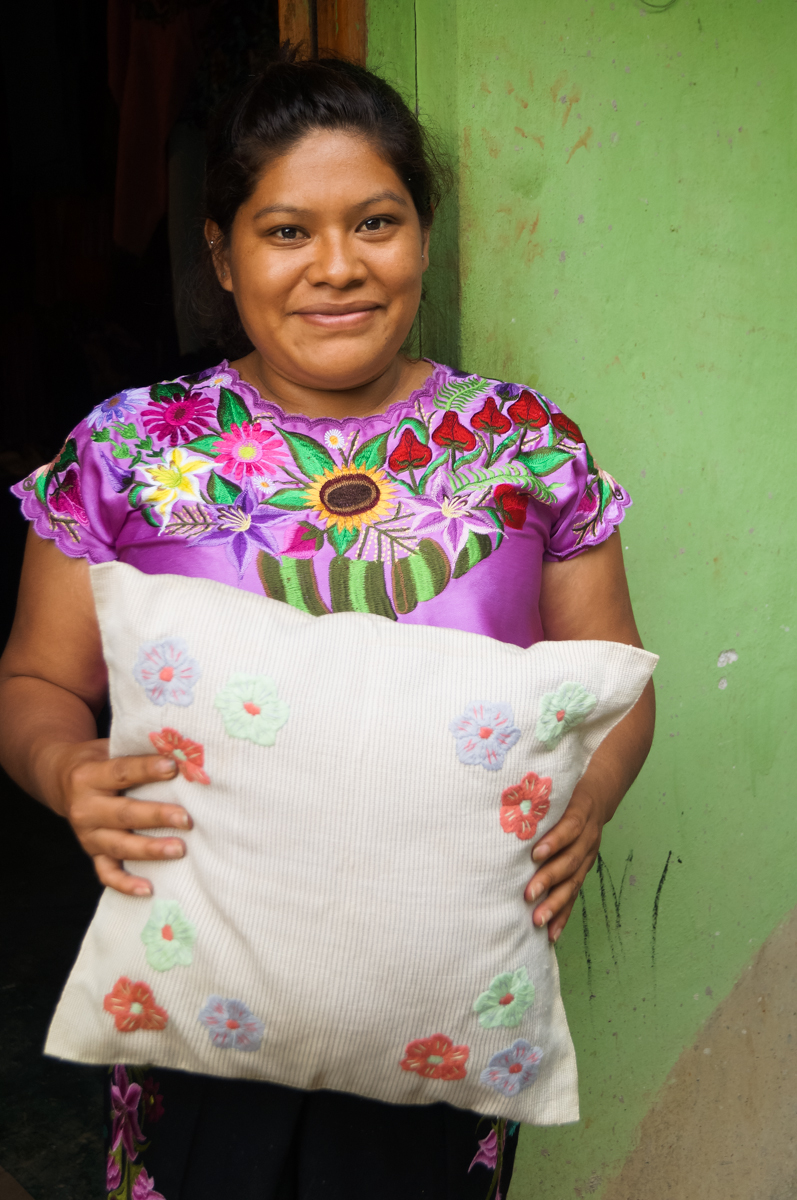 Yolanda Hernández Gómez, 29, leads Mujeres Sembrando la Vida, a collective of indigenous women who produce and sell crafts and woven textiles in southern Mexico. The name means “Women Sowing Life.” In the face of growing competition in local crafts markets, she and other cooperative members have implemented innovative designs to their work in an effort to stand out.

“Can you imagine that there is now craftwork that they bring from China or from Ecuador and it is very cheap?” Hernández Gómez says. “I don’t know how they do it.”

At the collective, a weaver, on average, works up to 15 hours to make one shirt or skirt, Hernández Gómez says.

In the face of competition, Hernández Gómez’s cooperative is developing fresh designs. Instead of adding flowers to plain fabric as a background, as tradition dictates, the cooperative weavers are embellishing patterned fabric.

“That gives it a different touch,” she says, “a more urban air.”

The cooperative’s women are also making blouses with cloth made with backstrap looms – an uncommon use for that type of fabric, she says.

The design innovations have paid off. Hernández Gómez says the craftswomen have nearly tripled their profits. And last year, the cooperative began selling its wares nationally and globally, she says.

Can you imagine that there is now craftwork that they bring from China or from Ecuador and it is very cheap? I don’t know how they do it. Yolanda Hernández Gómez, who leads the Mujeres Sembrando la Vida cooperative

In April 2015, Chamuchic, a company that helps artisans sell their products online and wholesale, bought 150 woven necklaces and 50 huipiles made using the backstrap loom for 15,000 pesos ($823).

Claudia Muñoz Morales, founder of Chamuchic, says she bought the cooperative’s products because they differentiated themselves from the rest of the textiles produced in the area.

“They aren’t the typical crafts from Zinacantán,” she says. “They make garments with distinct colors, with geometric designs. Moreover, they are making the woven blouses using a loom and all the other artisans use common cotton cloths.”

For the women in the cooperative, the shift has been life-changing. Pascuala Méndez, 30, says she earned as much as 6 pesos (33 cents) per hour before she joined the group in 2013. Now, she makes at least 15 pesos (82 cents) per hour. With the extra money, she’s fixed up the home where she lives with her 8-year-old daughter.

“A cheap product is damaging for everyone,” Méndez says. “I’ve already learned that my work as an artisan is worthwhile.”

About 65 percent of the population in Zinacantán municipality lives in extreme poverty, on a monthly income lower than 868.25 pesos ($47.62) in rural areas, according to 2010 Mexican government data.

Innovation in local crafts keeps those arts from dying, says Alejandra Mora, the director of the Centro de Textiles del Mundo Maya, a cultural center in Chiapas state that promotes Mayan textiles and the artisans who make them. It would be a positive change if more indigenous designers embraced innovation like Hernández Gómez does, Mora says.

A cheap product is damaging for everyone. I’ve already learned that my work as an artisan is worthwhile. Pascuala Méndez, 30, a member of the Mujeres Sembrando la Vida collective

To ensure that the weaving skills are passed on, the cooperative opened a school, called Yo’onik, in 2012 that teaches children, for free, to weave and embroider. The children also improve their Spanish, learn English, and write Tsotsil, the language of the Mayan indigenous group of the same name. Students can also take classes in basic computer skills. Fifty children between the ages of 5 and 15 attend the school, Hernández Gómez says. Each collective member donates 10 percent of her earnings, and the school runs on that money, she says.

“There are some indigenous villages that have already forgotten the techniques that their grandparents used to weave with, and the use of textiles has been lost,” she says. “We consider that we must strengthen the tradition, but by always adapting it to the present. And that is a way to keep our knowledge, our art alive.”

Hernández Gómez hopes to replicate this appreciation for artisanal work among many other indigenous women in Zinacantán so that more artisans and their children join the cooperative and school.

“It’s important that more women join the cooperative,” she says. “But, more importantly, that more boys and girls benefit from Yo’onik, and that they learn how to knit, dye, speak in English, write in Tsotsil and make our culture stronger.”