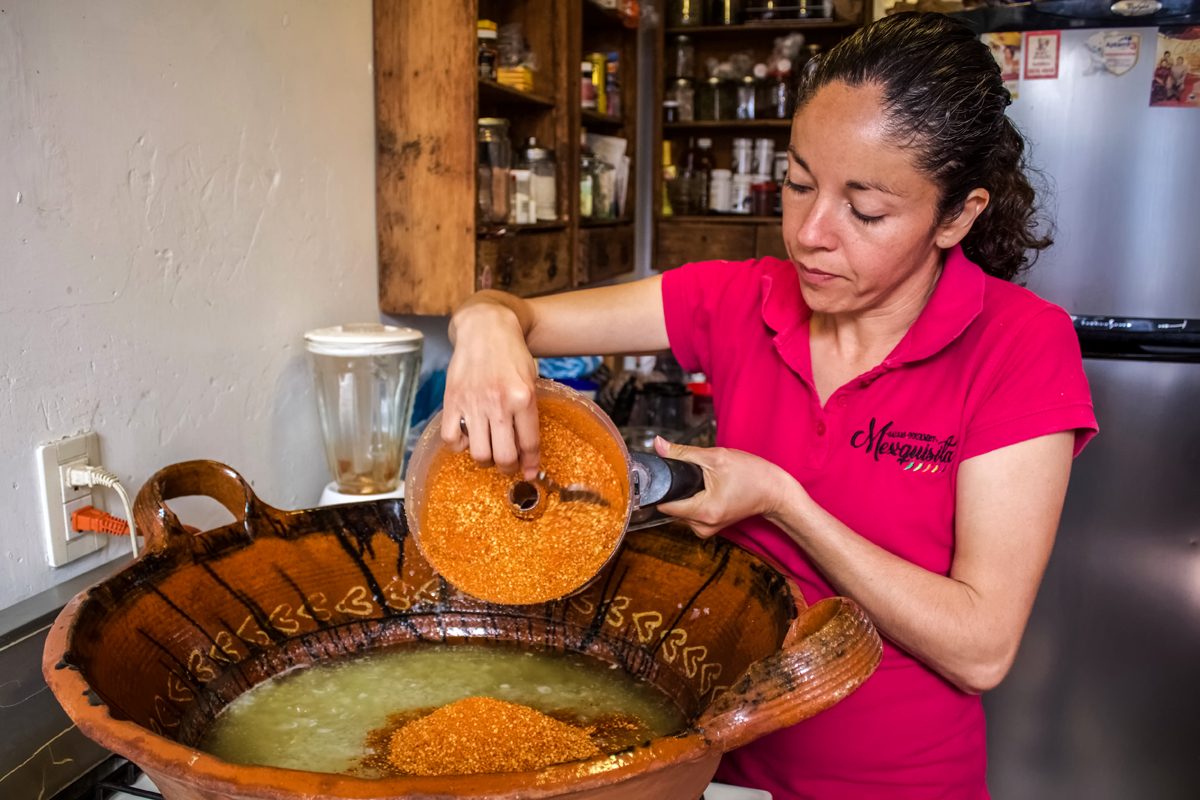 Then, about three years ago, a friend suggested that she make a business out of her knack for making delicious, spicy salsas that she often brought to family gatherings. She repurposed the jars for her salsas.

“I never really saw it as a business,” Galicia Acosta, 36, admits.

But with the encouragement of her father, and after taking an entrepreneurship workshop in September 2016, her gourmet spicy salsa company Mexquisita became a reality.

After just 18 months, the business is poised to grow, Galicia Acosta says.

She and her sister make all of the salsas, about 150 jars per day, and an acquaintance helps out with publicity. Now, she needs more staff and new equipment to increase production.

Galicia Acosta is part of a growing number of Mexican women launching microenterprises, which the Secretaría de Economía classifies as a business with no more than 10 workers. 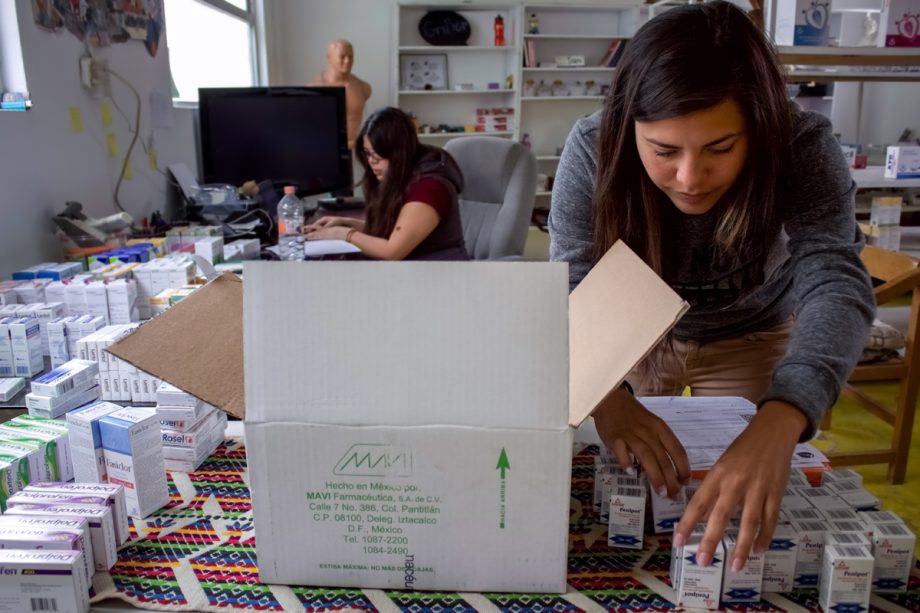 Female micro-entrepreneurs say the gains are not just financial, but also personal. Still, sexist ideologies about women in the workplace persist, experts say.

In Mexico, there are four million micro, small and medium enterprises, of which 97.6 percent are microenterprises. Women lead more than 400,000 microenterprises in Mexico, according to the national occupation and employment survey, updated in the third trimester of 2017.

There are many reasons women are taking the lead in these businesses, says Natalia Villalpando, general director of Crea Comunidades de Emprendedores Sociales, a nongovernmental organization that teaches business skills to female micro-entrepreneurs in urban and suburban areas that are socially and economically marginalized.

“Women have ventured into small business in order to contribute to family income,” Villalpando says, adding that Mexican culture is newly accepting of women at work. “Women have always been working and supporting their community; it’s just that society didn’t always recognize it as working.”

But there is still a long way to go toward achieving equality between the sexes in Mexico, says Gina Zabludovsky, a sociologist and researcher at the Universidad Nacional Autónoma de México who studies female entrepreneurs and executives.

“The idea exists that women who start microbusiness in order to contribute to the family economy or get out of poverty have to stay at that level since their work is only viewed as auxiliary,” Zabludovsky says. 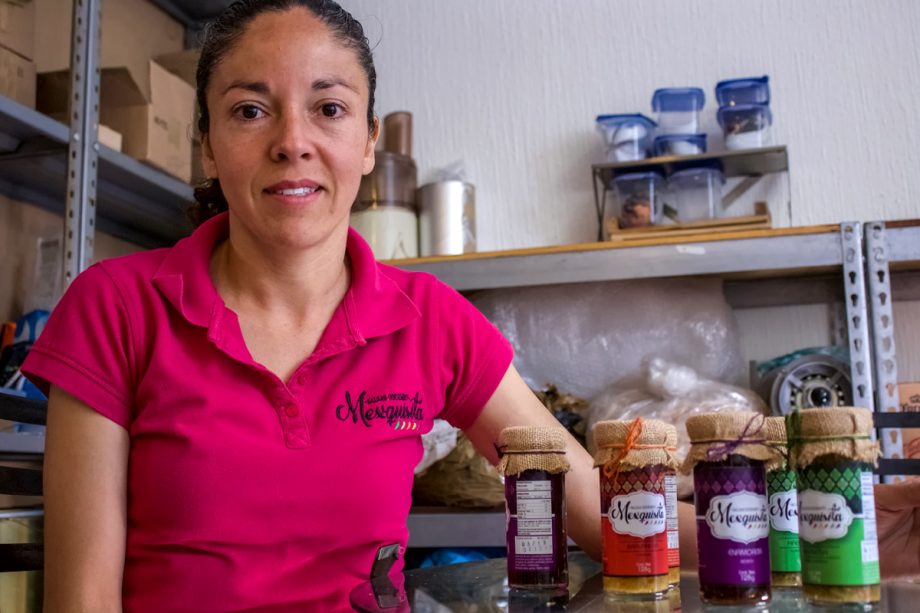 Karla Galicia Acosta, a microenterprise owner, shows off the spicy salsas she makes, in her kitchen in Mexico state.

While domestic responsibilities remain with women in most households here, women have to look for jobs that let them manage a double shift, at work and at home, she says, adding that the number of women who now run microbusinesses isn’t necessarily something to celebrate.

“It can be the women themselves because of their domestic responsibilities, the way that they were educated or because they take less risks, that they believe that staying at the micro level is what is reasonable for them,” Zabludovsky says.

The perception that women can’t or shouldn’t run businesses is ingrained from an early age, says Yanina Moreno Arroyo, 28.

In school, classmates would tease her because she was the daughter of a single mother. Their comments made her feel as though she were less than everyone else, she says. And it continued in college. She says her professors instilled in her the idea that she couldn’t aspire to greater things.

After bad experiences working for others, Moreno Arroyo says she chose to ignore these ideas. She started a pharmaceutical distribution business in March 2016.

The project started as a joint effort with her then-boyfriend. The relationship ended a few months later, and by September she had decided to split from the business and start her own, this time with her sister.

This time, Moreno Arroyo says the sisters understood that their success or failure was completely up to them. They had to lose their fear of presenting in front of potential clients, learn how to face rejection and negotiate with their providers. While the business is finding some success, she says she still finds it difficult to think of herself as an entrepreneur.

“I don’t know if it is our case in particular or something in general that you don’t give yourself an acknowledgement of ‘Yes, I am a businesswoman,’ because in the end we are,” she says.

There are other obstacles, too, such as financing. In Mexico, many women do not own land or a home and therefore do not have collateral to offer when looking for credit, says María de la Paz López Barajas, general director of Institucionalización de la Perspectiva de Género del Instituto Nacional de las Mujeres.

But two government finance programs, launched in the last two years to help women in microbusinesses, may begin to change that, Barajas says.

Government loan programs Mujeres Pyme and Crezcamos Juntas made more than 7,000 loans between 2015 and 2017. A total of 7.5 million pesos (about $402,000) was delivered through both programs, according to data provided by Inmujeres.

Correction: An earlier version of this article misidentified the location of Karla Galicia Acosta. Global Press Journal regrets this error.