Skip to main content
The story you are reading was published on Monday September 10, 2007. To read more recent stories click here. 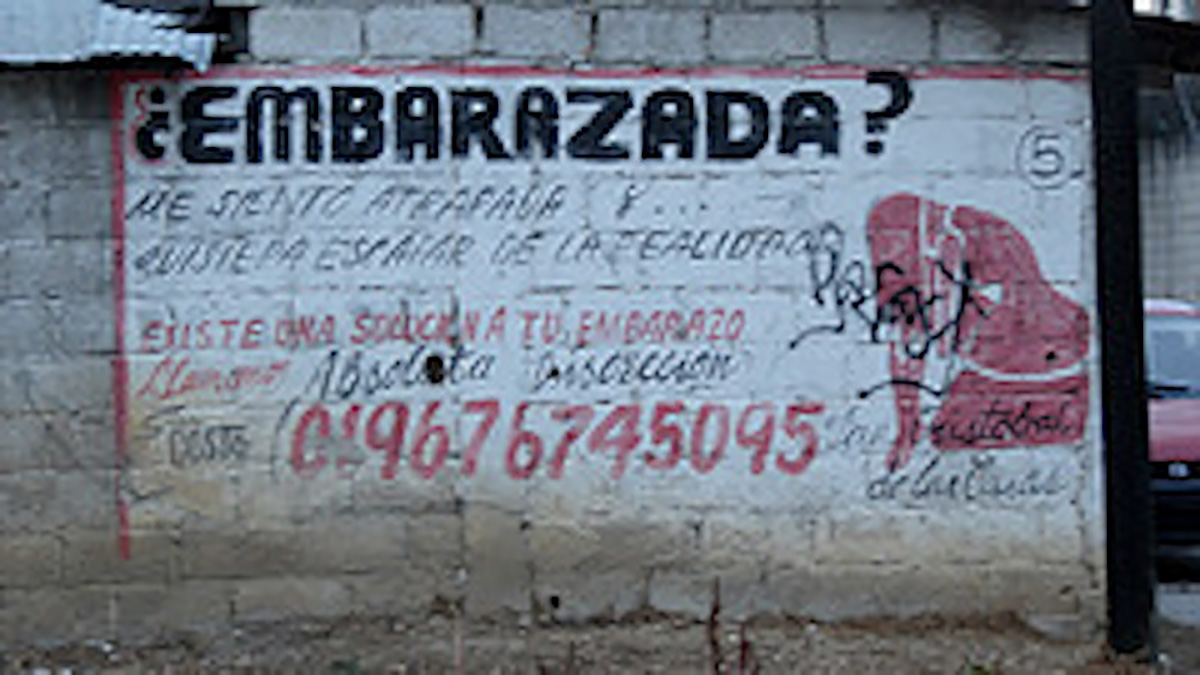 SAN CRISTÓBAL DE LAS CASAS — Ending an unwanted pregnancy is risky in Mexico, where, according to the National Geography and Information Institute (INEGI), 31 percent of abortions end in death.

Though abortion is illegal in most circumstances in Mexico, women find a way. They turn to midwives who prescribe herbs to “bring down blood.” They throw themselves down stairs. They find back-alley clinics or feminist doctors. Rich women fly to the United States.

Though many abortions are never tallied, INEGI data showed that at least 850,000 abortions are performed in Mexico every year, the vast majority of which are clandestine.

Mexican law allows abortion in three instances: in cases of rape, when the fetus is deformed and when the pregnancy puts the woman’s life in danger. But women who should legally be allowed to obtain abortions are often unable to.

Maria, 44, and Hilda, 19, both sought abortions. Both fit the criteria for a legal abortion. Both nearly died. They narrowly avoided becoming statistics, adding to Chiapas’ sky-high maternal mortality rate, the highest in Mexico. The second-highest cause of maternal mortality in the state? Hemorrhages resulting from abortions.

Maria, a mestiza educator, became pregnant in 1987, at age 25. The pregnancy was unplanned, but she decided to go through with it. During the first month, severe pain and bleeding sent her to a gynecologist who explained that hers was a high-risk pregnancy and that Maria’s life and the life of the fetus were in danger. The doctor prescribed eight months of bed rest. But Maria did not want to risk her life or spend months in bed. So she decided to terminate the pregnancy.

Maria had heard of women who sought legal authorization for an abortion, but never received permission and were forced to continue with unwanted and sometimes dangerous pregnancies. So she decided to take care of the matter herself. She found a doctor with a sign in his office that read, “We regulate menstruations,” a euphemism for abortion.

The doctor led her into a dirty, grey, cold room. Without anesthesia, without dilating her cervix, he inserted an object in Maria’s vagina that she says “hurt a lot.”

The procedure took less than 10 minutes, just enough time for Maria to realize that other women had already been there that day; there was a bucket full of blood under the table.

As soon as he finished, the doctor told her to get up and go, “I said, ‘Wait a little because it hurts a lot.’ He grabbed me by the arm, lifting me off the table and said, ‘Go now.’ ”

“He treated me as if I was the worst woman. It was horrible, I felt guilty, as if I had committed a crime,” she says. In fact, Maria and the doctor had both just committed crimes. Though no Mexican women are imprisoned for the crime of abortion, they face steep fines if convicted. Medical professionals are required to report what they suspect are illegal abortions, so often women who seek help in the emergency room after botched procedures are handed over to the police. Doctors who perform abortions risk losing their license and generally face six months to six years in jail.

But Maria’s story didn’t end there. Still bleeding, she felt unwell, so she went back to the first doctor who did three curettages and sent her home. Days later, Maria felt a searing pain. At the hospital, the doctors told her that she had a burst fallopian tube and a severe infection. She would have died if she had waited longer.

Maria’s pregnancy was ectopic. It could have been detected early on if her doctor had performed an ultrasound.

Eighty percent of Mexicans support legal abortion in the cases outlined by the law, according to a 2001 Population Council Study. Yet, Human Rights Watch has documented that medical and police workers often discourage women from aborting by using moral arguments, misinformation and bureaucratic delays. And, because abortion is banned under any circumstances after 12 weeks, some women who begin the legal process simply run out of time.

Hilda is an indigenous woman from Huxitan, a small town approximately 180 kilometers southeast of San Cristóbal. She is 19 years old, but has the mental capacity of a three year old. She has Downs Syndrome and is unable to talk. When Hilda’s period didn’t come in 2003, her mother, Celia, realized that her daughter was being raped by a cousin. A midwife confirmed the pregnancy and told Celia that her daughter’s life was in danger and that the fetus would be born with Down Syndrome.

When a woman has been raped and wants and abortion she must file a rape article in the office of the Public Ministry (PM). Officials perform a pregnancy test and a psychological assessment. The MP then sends the case to a judge who issues an order to a hospital. The hospital must perform the abortion, or provide the woman with other options. If the mother’s life is at risk or the fetus is deformed, a medical certificate must be presented to the judge who then issues the order.

Celia and Hilda began at the PM office, but rather than starting the legal process, the police in the office sent them to a civil organization that supports pregnant women. From there, Hilda and Celia were sent to another organization which recommended they return to the police and request a court order for an abortion.

When Celia’s mother returned to the police she said the secretary tried to discourage her saying it was better if her daughter had the child because if Hilda died during the abortion, Celia would be responsible for raising the baby.

Esperanza Balcazar of the PM office said that they were unaware that this comment was made. “It was a personal opinion, and a matter of personal judgment. It was not a prohibition and the woman should have continued [to seek the abortion] if her decision was to have an abortion,” Balcazar says.

Celia and Hilda did continue to pursue the legal route to an abortion. Next, the police sent Hilda to another clinic to obtain medical permission for an abortion. Permission was finally granted. But Hilda and her mother had spent a month trying to obtain legal permission, and Hilda was now 14 weeks pregnant, two weeks too far along to obtain a legal abortion in a hospital.

But they tried anyway. Celia took her daughter and the certificate to the Regional Hospital. But the doctor didn’t care about the certificate. Celia says they were told that abortion is a sin and that the hospital did not kill people. The doctor recommended that Hilda begin prenatal care.

So Celia and Hilda returned to Huxitan. Hilda began bleeding heavily in her fifth month of pregnancy. She and Celia headed again for the hospital in San Cristóbal. During the trip, in the back of a pick-up truck, Hilda gave birth to a stillborn child.

Three years later, Hilda is still being raped. She now has a baby, also with Downs Syndrome, that Celia cares for. When she became pregnant with this child, Celia didn’t pursue a legal abortion for her daughter. The family is still seeking justice for her daughter’s rapist. The PM’s office has issued a warrant for the rapist’s arrest, but said that they won’t enter Huxitan to apprehend him unless their safety can be guaranteed.

Hilda fit all three criteria for a legal abortion: her life was at risk, the fetus she carried was genetically malformed and she had been raped. But she could not get an abortion because the delays at the MP’s office meant she missed the window of opportunity for the procedure.

She is not alone. The Second Assault, a 2006 Human Rights Watch study that documents the obstacles people who have been raped face in obtaining legal abortions, included the story of another mentally-disabled woman who had been raped by a neighbor in the state of Guanajuato. The delays and inexact information at the MP’s office kept her from obtaining an abortion before the 12 week cutoff, too. According to the article, one PM agent told her, “Abortion is a crime.” Her mother told the agent it was rape. According to the report, the agent’s response was, “It doesn’t matter.”