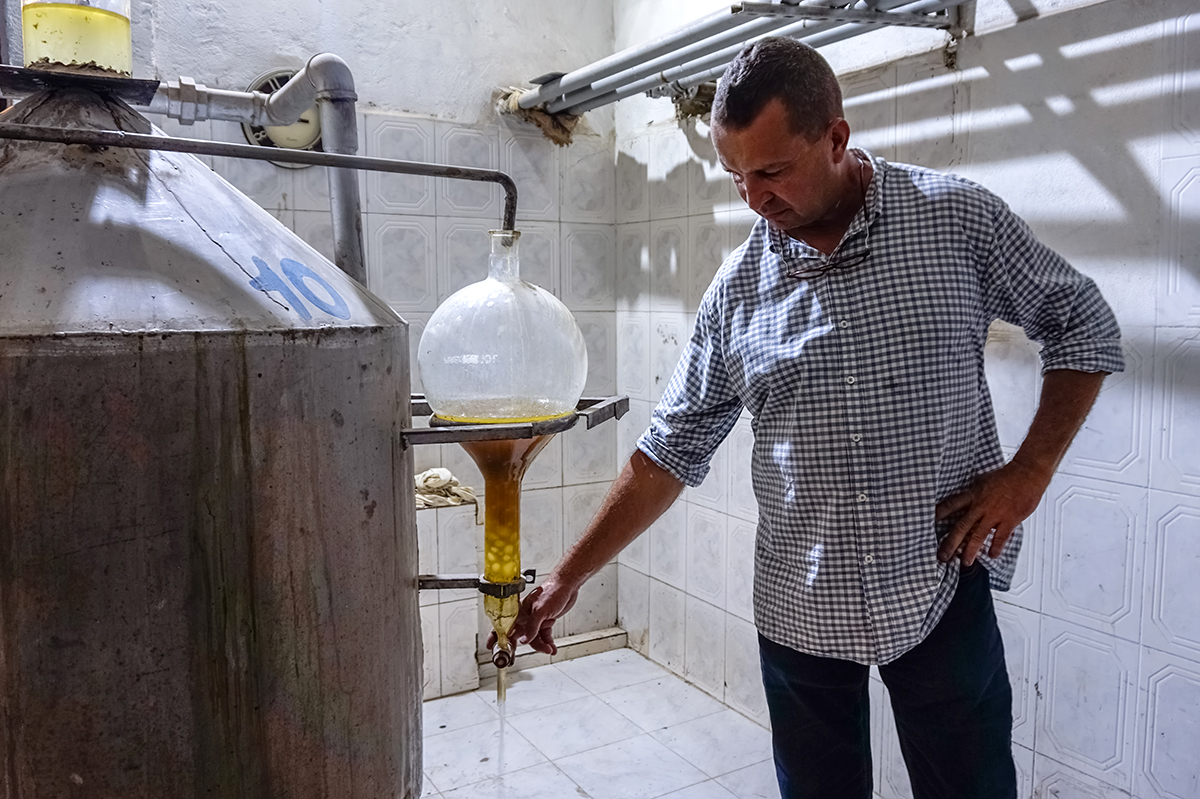 For decades, small-scale farmers in this area of Les Cayes, a borough in southern Haiti, have been growing vetiver, the country’s most valuable agricultural export. Sonore started when he was just 17 but quickly found that farming the perennial plant known for its fragrant, high-quality oil, used to treat anxiety and promote brain health, was a high-stakes activity.

Vetiver is harvested by digging the whole plant out of the ground, he says, a practice that has led over time to soil degradation and erosion.

With rich topsoil gone, vetiver cultivators in Haiti’s southwestern hillsides worry that they may no longer be able to grow and sell the plant to feed their families. But UniKode, one of the country’s leading vetiver oil producers, is working with 13 farming cooperatives to enhance the harvesting process.

Sonore, now in his early 30s, belongs to one of them. He says members of Coopérative des Producteurs de Vétiver de Tricon (COPVET) are learning how to use natural erosion-control barriers to transform what has long been parched, rutted turf into fertile grounds teeming with tall bunches of brown-green vetiver grass.

Though smallholder farmers struggle to supply the population with staple crops, the country is trying to position itself as a top player in the global trade and cultivation of essential oils. In 2016, Haiti exported $32 million worth of essential oils, according to the Observatory of Economic Complexity at the Massachusetts Institute of Technology. 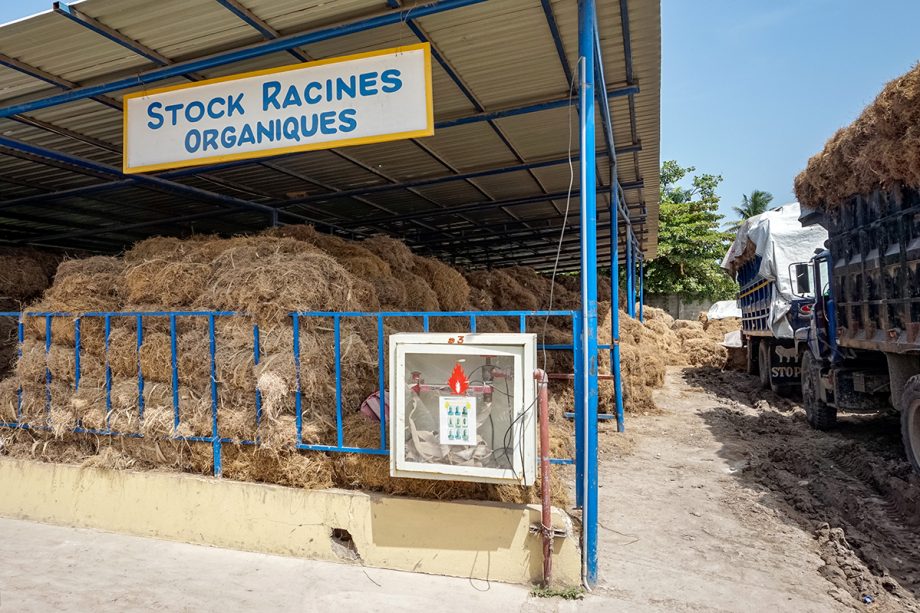 A truck delivers 350 bales of vetiver from farms in the area to the UniKode factory in Les Cayes, Haiti. Each bale sells for 2,000 Haitian gourdes ($30).

Each year, Haitian farmers grow 50 percent of the estimated 120-150 tons of vetiver oil produced worldwide, ETC Group reports. The international organization, dedicated to the development of new agricultural technologies, credits some 30,000 farmers in the southwest of the country for the high production levels.

But vetiver oil production isn’t increasing. A Columbia University research paper says annual production totaled 400 drums in the 1980s and 1990s, compared with 700 drums during the 1970s. One drum contains approximately 53 gallons of vetiver oil. Similarly, farmers in Tricon say yields are lower than they were some years ago.

While vetiver grass has been used around the world as a tool to control soil erosion, those growing it for oil say it is destroying topsoil and fear their farmland may soon disappear.

“Not a single inch of land for growing vetiver, let alone some corn, had been spared,” Joseph Bateau Thès says of one harvest season when heavy rains washed away his crops.

Thès, who’s been growing vetiver for four years, used to harvest the plant by completely uprooting it, exposing precious soil. But now, he’s a member of Coopérative des Planteurs de Vétiver de Manceau (COPLAVEM), another farming cooperative, and has been able to limit erosion on his vetiver plantation thanks to UniKode.

In southwestern Haiti, some 30,000 farmers are dependent on growing vetiver, dubbed the country’s “super crop.”

Thès and other vetiver farmers are using “rampes,” piles of crop residue placed along a contour, to prevent soil erosion and degradation. UniKode is helping them build these natural barriers.

Haiti’s vetiver growers aren’t always aware of the damage that uprooting the plant can have, Personna says.

“That’s why we, the people of Tricon, have worked to the best of our ability to protect our land: because it’s key to our economic survival,” he says, adding that members of his cooperative are benefiting from using rampes.

“We’re working with a horde of co-ops, encouraging them to leave vetiver rampes in their garden, with a spacing of 5 meters (16 feet) between rampes, depending on the size of the cropped garden,” says Jerry Jean Joseph, an agronomist with UniKode. His company has been working with COPVET for four years to increase members’ yields and reduce erosion. 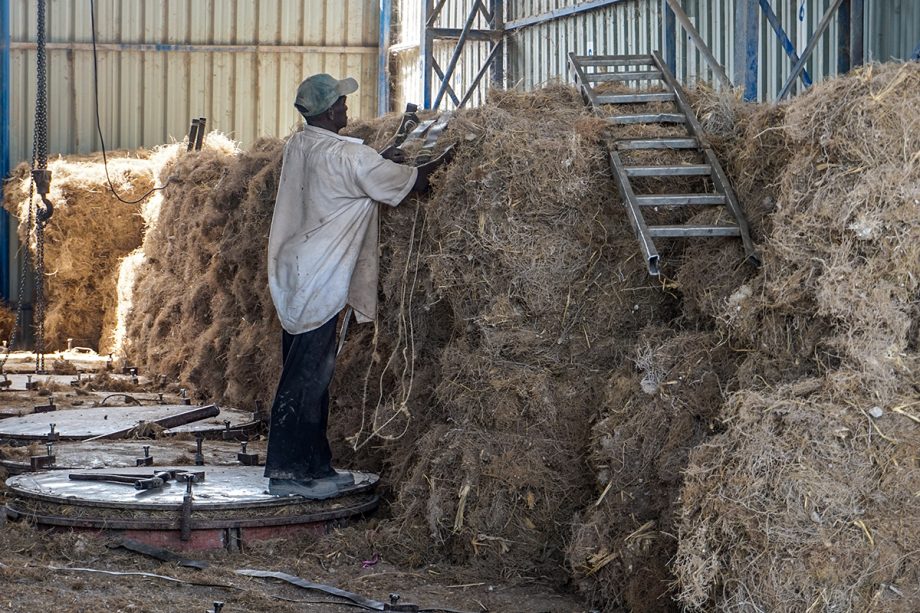 Fritz Pierre François Jean Baptiste, a worker at the Unikode factory in southern Haiti, stores bales of vetiver grass in a shed.

Coaxing farmers to use rampes is no easy task, Joseph adds, since it’s a farming method that many of them are not used to. But, Joseph says, UniKode is giving vetiver farmers across the region an incentive to use rampes.

“We’re not content with only buying from growers, and that’s the reason why each time we buy, we check to make sure growers have harvested, leaving rampes in the soil,” he says.

With rampes and other sustainable farming practices, Haiti’s essential-oils industry could grow to supply even more aromatherapists around the world, says Mirline Delva, an economist.

“Growers have to understand the need for them to give their best to preserve this asset,” Delva says.

For now, Tricon’s farmers say the rampes have been effective.