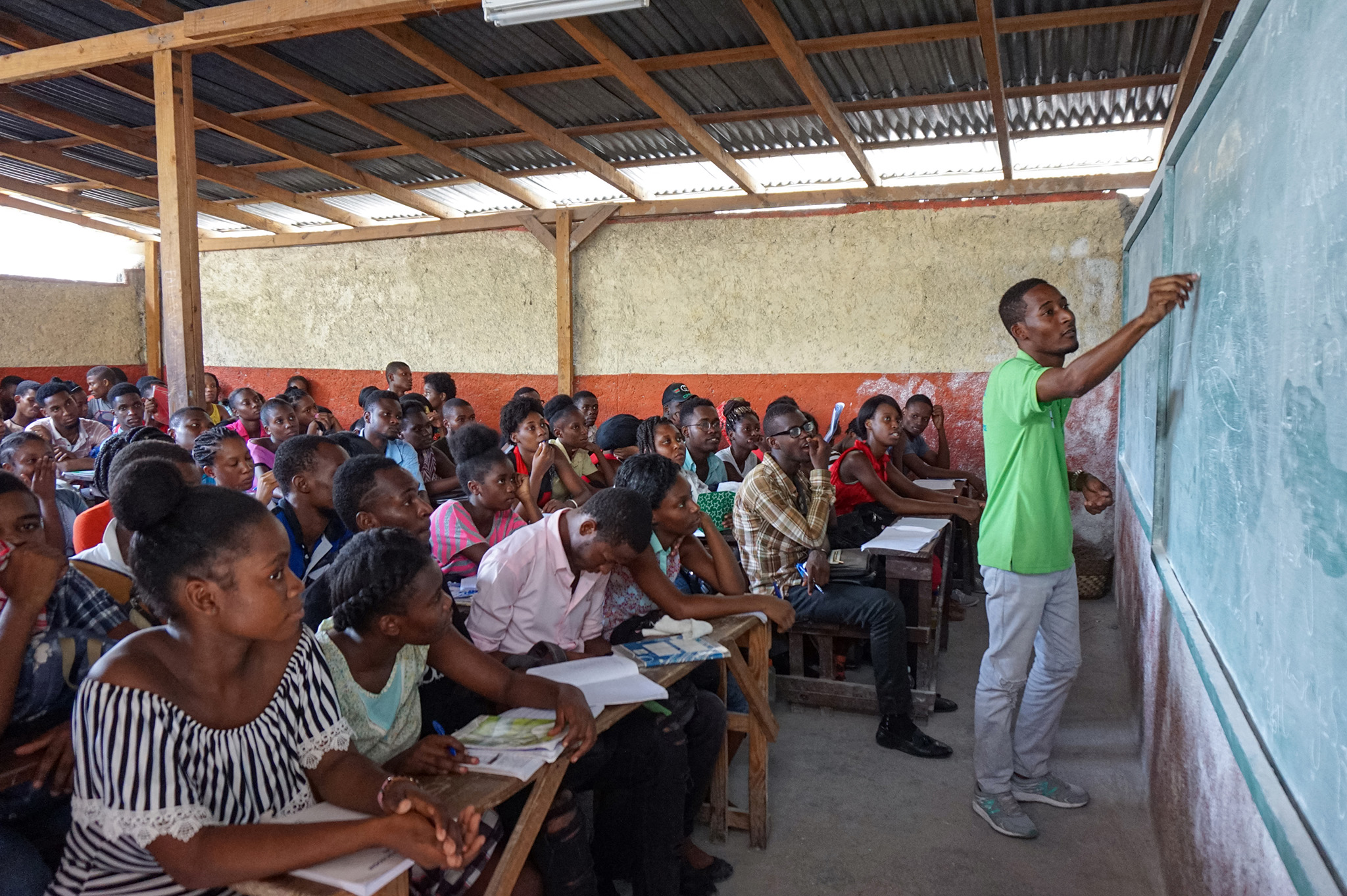 PORT-AU-PRINCE, HAITI – In the ferocious heat of a summer day in Haiti, every one of the 70 secondary school graduates gathered in this packed classroom in the Carrefour neighborhood shares a single goal: Pass the annual admission test for the State University of Haiti, the country’s most prestigious university.

For a month and a half, from 7 a.m. to 5 p.m. Monday through Friday, participants in the PREFAC Gratis program study previous admissions tests with the help of instructors from an organization called CHAPEAU, all of whom are current students at the university.

Sargine Lorreus, 19, is a participant in the program. She just completed her secondary education and wants to go on to study administration and management. The stakes are high – she can’t afford to study at a private university, or to complete her degree abroad.

“Because of my parent’s economic means, I have to pass the test to go to state university,” she says. The pressure for a student in her situation is immense, she says. “If we don’t work hard and we fail to pass the admission test, then we’ll have spent all those years for nothing.” 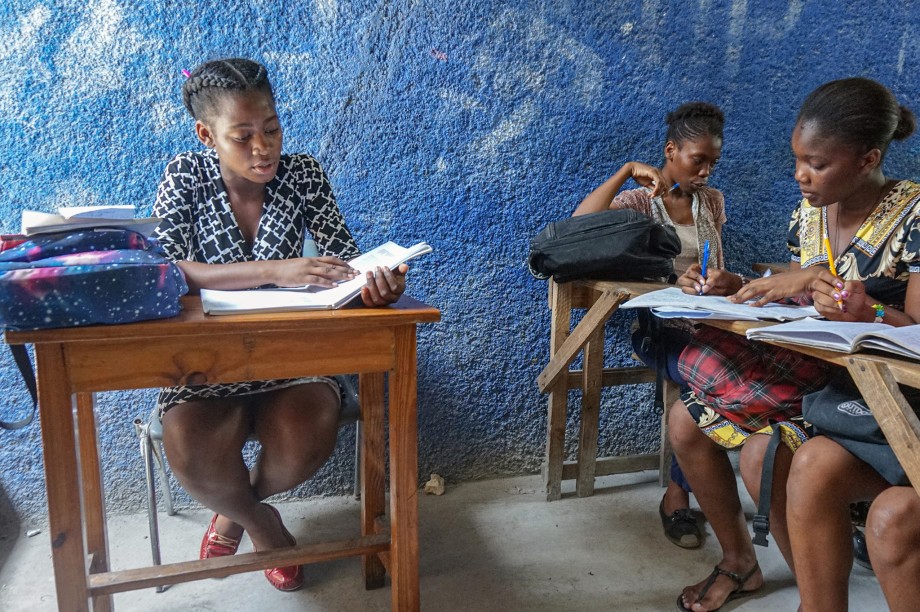 Sargine Lorreus, 19, takes a weekly practice test as part of the PREFAC Gratis program. She wants to study administration and management at the State University of Haiti.

Lorreus has stiff competition. The university is hopelessly oversubscribed, says Hérold Toussaint, the vice chancellor for academic affairs. He says they receive up to 55,000 applications per year, with a total capacity of just 6,000 students across 11 faculties.

“We’d like to enroll more students, but our means are very limited because of the very low financial resources provided by the Haitian government,” Toussaint says.

CHAPEAU is the French acronym for Circle of Hedonists and Progressives for Emancipation and University Action. Macilio Appolon, the project coordinator, founded the organization in 2017 with eight other students from the university. They wanted to improve the chances of applicants from all over the capital, including those in Carrefour, who face significant challenges when applying to university.

“We live in an impoverished area,” says Kysmide Joseph, CHAPEAU’s public relations manager and a psychology student in her final year at the university. In the past, she says, “young people in this community haven’t had the chance to pass admission tests.”

Part of the problem is that the questions posed in the admission test bear little resemblance to what the students have been taught at school. While in class students learn math, social sciences and philosophy, Appolon says, the test quizzes them on general knowledge, culture, sports and news.

CHAPEAU trains students in these categories and uses previous tests and general exam strategies to help them understand what’s required of them when they sit the admission exam.

Vanessa Rodney, a second-year law student at the university, says those strategies helped her pass the test.

With the assistance of CHAPEAU, she says she learned how to focus on answering the questions she knew the answers to well, instead of wasting her time on those she didn’t know.

“I wasn’t prepared,” Rodney says. “Young people of this organization are the ones who really helped me. They taught me the best techniques.” 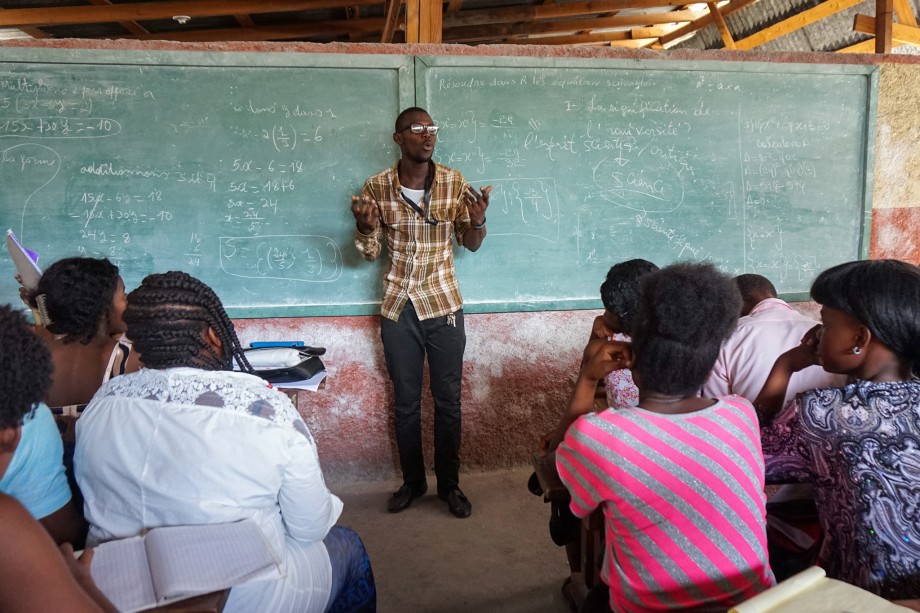 Francky Jean Marie, 19, explains what he’s learned in a PREFAC Gratis session to his fellow students.

Joseph says the results have helped many others like Rodney get into university. “In the past two years, 44.4% of students in this area have gone to the state university – we’re increasing the number for the good of the community and the country as a whole,” she says.

Jude Edouard Pierre serves as mayor of the commune of Carrefour. Each year he gives a motivational talk at the beginning of the program. “As mayor and citizen of the commune, my participation is a duty,” he says.

But CHAPEAU’s work cannot reach all of the thousands of students who hope for a tertiary education in a country where more than half of the population is under 25 years of age.

“The country is blessed with young people, and I hope that one day, we’ll have many more universities,” Lorreus says.

For her part, she’s still waiting to take the test. Political instability has halted the admissions process for this year; just another barrier to education for a young person in Haiti.