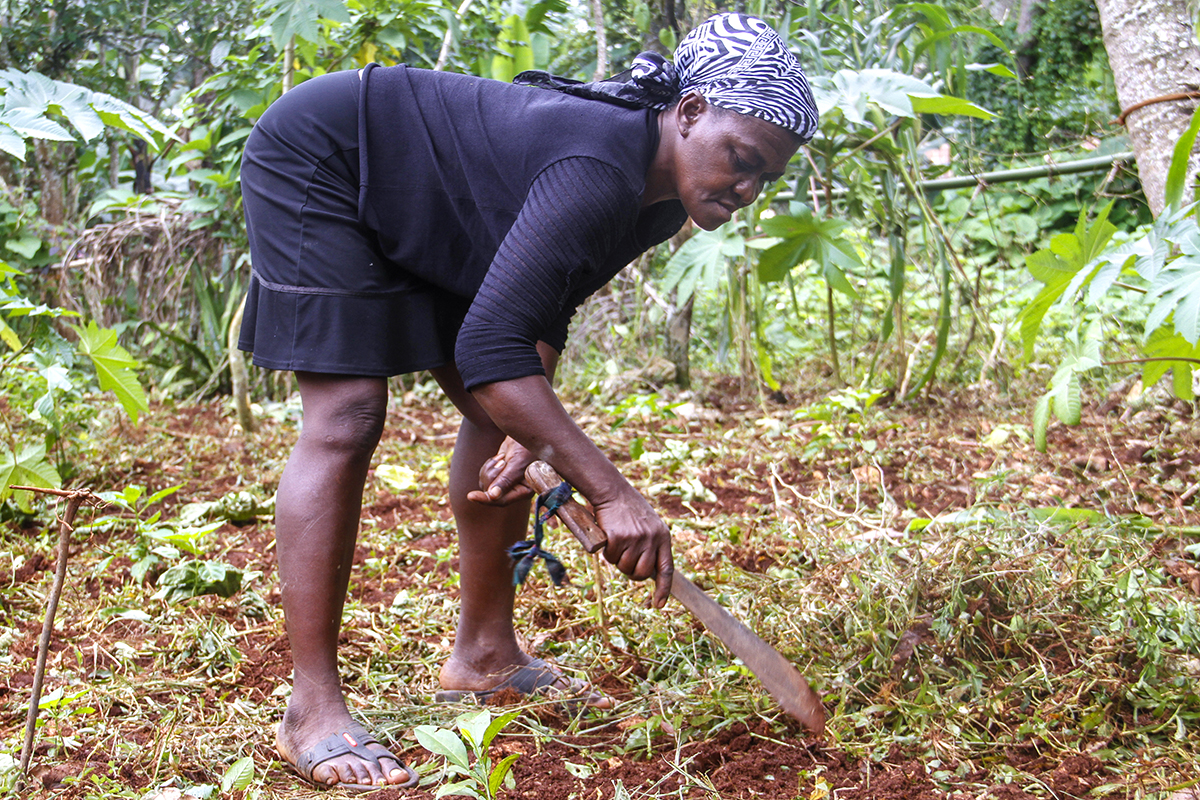 CAYES-DE-JACMEL, HAITI — Marie Anna Jolicoeur grew up on her family’s farm, and she has fond memories of how local farmers used to work together to help each other in this southeastern region of Haiti.

“My father went to help a family in the community, and this same family came to help us,” she says.

But in the farming community, things are different now, says Jolicoeur, a single mother of five children. She works on the family farm where she grew up in Cayes-de-Jacmel’s Cap Rouge neighborhood. In the face of droughts and a lack of insurance, she says farm work is increasingly difficult. To further complicate matters, tools are rudimentary and help is hard to find.

“To find help, you must enter into a relationship with a man,” she says. “If you do not accept, you must work single-handedly or with your children.”

Jolicoeur uses her hands to dig holes and plant maize. The tools she uses are the same tools that her father and grandfather used. She weeds her fields with a hoe and digs with a spade.

“I rely on rain alone to feed my field, and when there is rainfall scarcity, all our crops are lost,” she says.

Farmers are desperate, and no longer believe in working on the land. And yet Haiti is a predominantly agricultural country and the majority of the population rely on agriculture for their livelihoods.Jean Marc Balame, an agriculture officer in southeast Haiti

She has no insurance to help guard against damage from natural disasters, such as Hurricane Matthew, which struck the island last October.

“It is a serious problem. There is nothing sadder than investing everything you have in a garden and having nothing left to survive on after all the crops have gone after a cyclone has passed,” she says.

Though about half of Haiti’s population are farmers, food can be scarce.

According to a post Hurricane Matthew assessment by the World Food Programme, the emergency food-assistance branch of the United Nations, 50 percent of rural Haitian households were considered food insecure.

Farmers are more likely to be exposed to food insecurity than non-farmers, according to the assessment, where the highest proportion of food insecurity was observed among smallholder farmers.

The Ministère de l’Agriculture des Ressources Naturelles et du Développement Rural, the ministry charged with defining agriculture and natural resource policy, is actively working to implement a plan to revive the sector by 2025. Planned efforts include linking small farmers to market opportunities and investing in storage and quality control technologies.

In March, as part of that effort, the ministry produced a more specific “roadmap” to boost the sector, including plans to establish an insurance system for farmers. A $35 million World Bank project was approved in June to restructure an earlier project to help small producers in areas affected by Hurricane Matthew.

Farmers on the ground say they don’t feel the impact of these policies or proposed services.

“Lack of support in the agricultural sector is the main cause of constant food shortages,” says Seresse Andrice. The farmer and father of seven lives in Cayes-de-Jacmel and works three fields on different plantations growing maize, cassava and sweet potatoes.

Even before a 7.0 earthquake hit the country in 2010, the country was already importing more than 50 percent of its food.

Like Jolicoeur, Andrice’s tools are machetes, hoes, spades and shovels.

“We still use rudimentary tools of production inherited from our grandparents,” he says. “Poor production is the main cause of never-ending hunger, and we are obliged to eat imported rice, day and night.”

Jean Marc Balame, who been working in agriculture in southeast Haiti for four years, says much more needs to be done to provide agricultural support to Haiti’s rural areas.

“Farmers are desperate and no longer believe in working on the land. And yet Haiti is a predominantly agricultural country, and the majority of the population rely on agriculture for their livelihoods,” he says.

Jolicoeur, Balame and Andrice all say fewer young people are interested in farming.

Camille Chalmers is president of the Plateforme Haïtienne de Plaidoyer pour un Développement Alternatif, a coalition of Haitian organizations advocating for agricultural policies. He says agriculture is still not a political priority here.

“Simply put, agricultural producers receive no scientific and technical support and have no access to insurance services that can protect them from losses,” he says.

While it is an important sector for the nation, he suggests that its marginalization in Haitian politics dates back to the Haitian revolution, when slaves who had worked the large colonial coffee, sugar and cotton plantations revolted against French colonial rule.

“Agriculture remains the furthest thing from political players’ minds, resulting in low-productivity of agriculture. And Haitian people will continue to be trapped in a never-ending cycle of food insecurity unless policymakers shift focus to agriculture.”