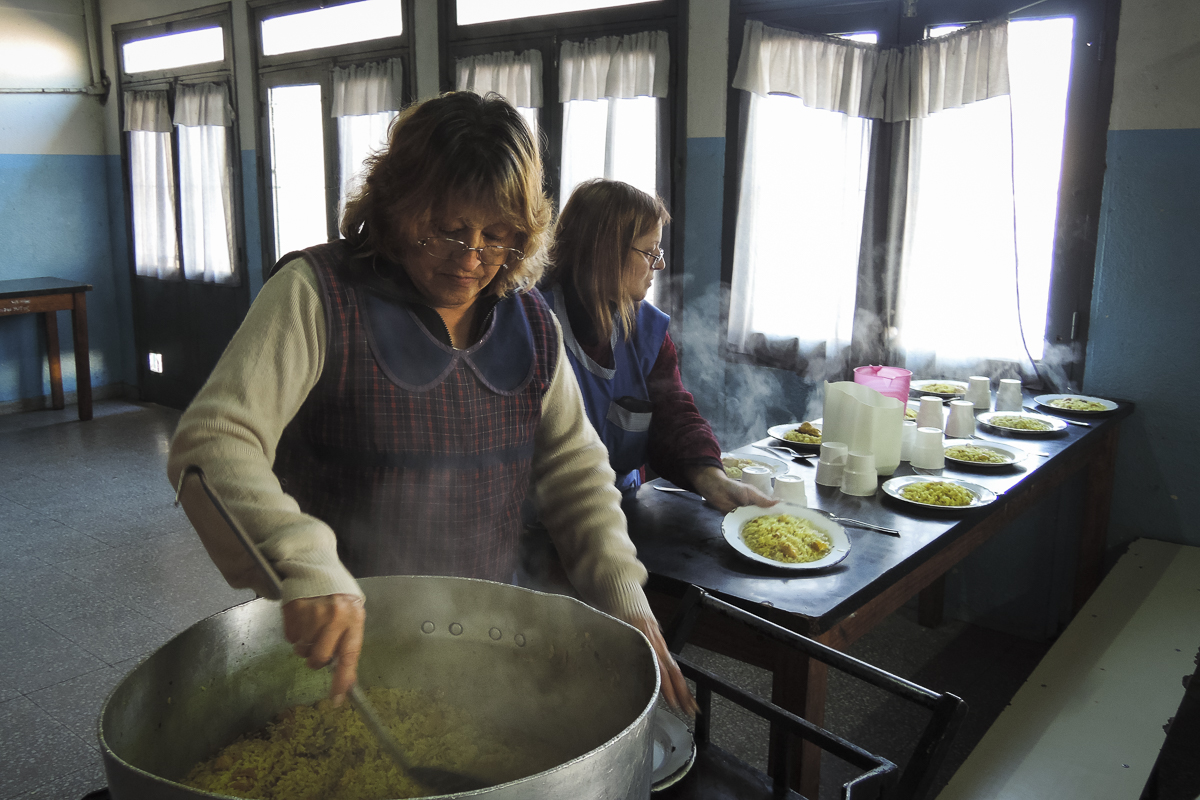 BUENOS AIRES, ARGENTINA – The children are finishing lunch. A gigantic pot from which assistants serve food at Escuela Primaria No. 41 José Manuel Estrada, a primary school in Buenos Aires province, is back in the kitchen, completely empty.

An 11-year-old boy shyly approaches the kitchen and asks if there is any leftover bread from breakfast. A kitchen helper cuts a piece and tucks it in the pocket of the boy’s overalls. The boy thanks the helper and runs off.

The school’s cook, Sandra Bovino, says the food the school gets from the government is no longer enough for some children to get second helpings, as it was last year.

“We give them everything we have but sometimes what they send us is not enough, and we have to serve less,” Bovino says.

Plus, she says, children are coming to school hungrier.

“Things got so expensive that they can no longer afford food,” Bovino says. “We notice that in the cafeteria. This year they are eating much more. On Mondays they [are ravenous]. It’s clear they do not eat Saturdays and Sundays.”

They had to send us 17 and a half kilos (38.6 pounds) of ground beef, and we received eight (17.6 pounds). Instead of 36 kilos (79 pounds) of chicken they sent us six (13 pounds). The milk disappeared altogether from the menu, and we just started getting fruit in May. Graciela Solari, principal of the Escuela Primaria No. 41 José Manuel Estrada, referring to daily quantities provided to the school by the government

But it’s getting harder to get a full meal at school, too. The government of Buenos Aires province reduced the number of meals it will provide by between 15 and 30 percent, depending on the school, for this academic year, according to data collected by the Sindicato Unificado de Trabajadores de la Educación de Buenos Aires, a union of education workers. This academic year for primary schools began on Feb. 29 and is scheduled to end in December.

School staff members say they’re trying to stretch fewer portions to feed all the children who need meals – last year, that was about 1.5 million children in the province – but inflation is making that even harder than that ordinarily would be.

INSIDE THE STORY: A Global Press Journal reporter looks for consequences of higher poverty rates in Argentina and finds a story at local schools. Read the blog.

Silvia Almazán, secretary of education and culture for the union, says the provincial government increased the amount for lunch per child from 6.30 pesos (42 cents) to 12.60 pesos (84 cents) in May. That increase came after a recent union dispute related to school meals and teacher salaries. The last increase was in June 2014, when the amount for lunches rose from 5 pesos (33 cents) to 6.30 pesos (42 cents).

But even a doubled amount of money per meal doesn’t buy the amount of food it did for a meal a few years ago.

Parents, teachers and school employees are demanding that the government reverse the cuts and restore food quality.

Representatives of the Ministerio de Desarrollo Social for the province, the government body in charge of handling all government meals for schools, did not respond to Global Press Journal’s interview requests.

The school meal reduction is one government effort to cut costs in the face of an economic crisis.

According to the World Bank’s World Development Indicators, Argentina’s 2014 inflation rate was 29.3 percent – the second highest among more than 200 countries listed. (The data did not include a rate for Venezuela, where inflation has sparked street violence.)

One report published by Economía Política para la Argentina, a publication managed by a collective of economists, found that Argentina’s rate between January 2015 and January 2016 was 35 percent. That report based its findings on Argentina’s San Luis province.

I like to eat at school, I liked it a lot when there was cake. Now there almost never is any. Day before yesterday they gave us a tangerine. It’s been a long time since they’ve given us that.Enzo Castaño, an 8-year-old student

Argentines say they now pay double, triple or quadruple the former price for some goods. And the poverty rate is on the rise, from an estimated 29 percent by the end of 2015 to an estimated 34.5 percent in March of this year, according to surveys carried out by the Pontificia Universidad Católica Argentina.

People who work in schools and soup kitchens say they now receive less food, as well as a lower quality of food, compared with the last school year.

Teachers and cooks say they manage to feed all the students, but add that it means cutting portions. The school menu once included meat, fruits and vegetables, they say, but it’s now based on rice, noodles and lentils.

Cafeterias in Argentina’s public schools have long existed and were formalized nationally in the 1980s. But not all public schools in Argentina have cafeterias. Meals are offered at schools that enroll students whose families struggle to afford the meals, Almazán says.

The state provides each school with a cafeteria a daily fixed amount per student with which schools can buy ingredients for lunch, breakfast or a snack. The change in food quality and amount was clear at the beginning of this school year, Almazán says.

“We noted a deterioration in the quality, quantity and variety of food,” she says. “When the menu is chicken with rice, they are delivering four chickens for 160 kids. And that is not enough.”

Graciela Solari, principal of the Escuela Primaria No. 41 José Manuel Estrada, kept a copy of the school lunch menu from the 2015 academic year. She uses this as an example of the decline, and to demand how much food should be sent to the school this year.

“They had to send us 17 and a half kilos (38.6 pounds) of ground beef, and we received eight (17.6 pounds),” Solari says, referring to daily quantities. “Instead of 36 kilos (79 pounds) of chicken they sent us six (13 pounds). The milk disappeared altogether from the menu, and we just started getting fruit in May.”

Children go to the school cafeteria because they come from homes that cannot provide them two meals, Solari says. This poverty among families is demonstrated in the children’s health and ability to be educated, she adds.

“We have kids with health problems, low weight, malnutrition and we see that toward the end of the month absenteeism increases because transportation is expensive,” she says. 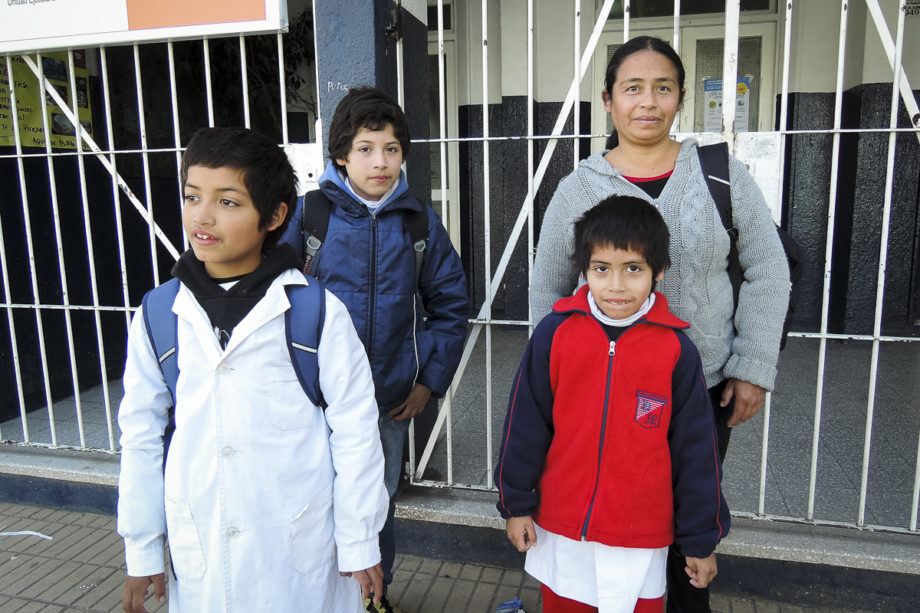 Elva Beatriz Caballero stands with her three sons, including 8-year-old Enzo Castaño (front right), who attends Escuela Primaria No. 41 José Manuel Estrada in Argentina’s Buenos Aires province. Caballero says her family relies on school meals, but Enzo says the food isn’t as good as it used to be.

“With the father we always tell them that we have to eat what we have, no reason for being fussy, because things could get worse,” Caballero says, referring to their situation at home and in the country.

Enzo Castaño, Caballero’s 8-year-old son, says he has noticed a difference in what is served this year.

“I like to eat at school, I liked it a lot when there was cake. Now there almost never is any,” Enzo says. “Day before yesterday they gave us a tangerine. It’s been a long time since they’ve given us that.”

Gabriela Damianoff, another mother at the school, says that her children, too, have noticed the difference.

“Last year the kids did not come home hungry from school. Now they sometimes tell me that they could not get seconds and that they were left hungry,” Damianoff says. “Sometimes I, the way things are, cannot prepare two meals, that is why it’s important for schools to serve food.”

For hungry families, even soup kitchens aren’t the options they once were.

They are taking in more people and less food this year, says Marianela Navarro, a representative for the Frente de Organizaciones en Lucha. The organization, which receives assistance, including food, from the government to run its soup kitchens, has 46 kitchens in Buenos Aires province, she says.

“We went from January to late April without receiving goods,” Navarro says.

The dining halls reopened in May, Navarro says, after the organization reached an agreement with the provincial government over how much food it would receive. 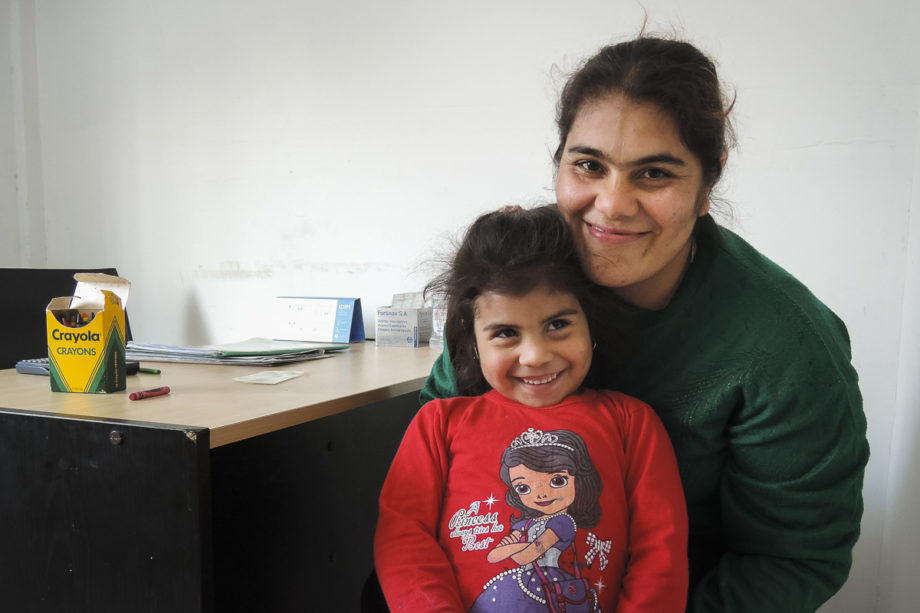 Melina Orrego, an assistant at a soup kitchen in Buenos Aires, holds her three-year-old daughter. Orrego says she’s noticed a decline in both quantity and quality in government-provided food.

Melina Orrego, an assistant at a soup kitchen in the southern part of Buenos Aires city, says more families are coming to the dining hall.

“There are much more people coming to the soup kitchen since February or later,” Orrego says. “More people come, but the food is the same. I peel the same number of potatoes, or fewer, and they are divided among more.”

Poor nutrition has consequences for the health and development of children in the short and long term, says Luisina Peláez, a nutritionist specializing in child malnutrition at Centro CONIN Barracas, a center in Buenos Aires city which manages Fundación Pilares, an organization that, along with pursuing other goals, works to combat malnutrition.

The new school menus do not provide children the nutrients they need for growth, Peláez says, adding that her conclusion is drawn from what she’s heard about the menu.

“It produces what we call covert malnutrition,” she says. “Maybe the child is the right weight but he or she may not have the essential nutrients that he or she needs to develop.”

Food is key to the development of the nervous system and the consequences of a poor diet includes stunted growth, learning disabilities, delayed development of the reproductive system, anemia and vitamin deficiency, adds her colleague at the center, Catalina Rondineau.

For Almazán, the solution is that the state no longer views feeding children as an expense, but rather as a way to guarantee the rights of those children to food, health and education.

The way to achieve this is through struggle and demands, she says.

“Now we must ensure that each school has as many slots in their cafeterias as students who need them,” Almazán says.