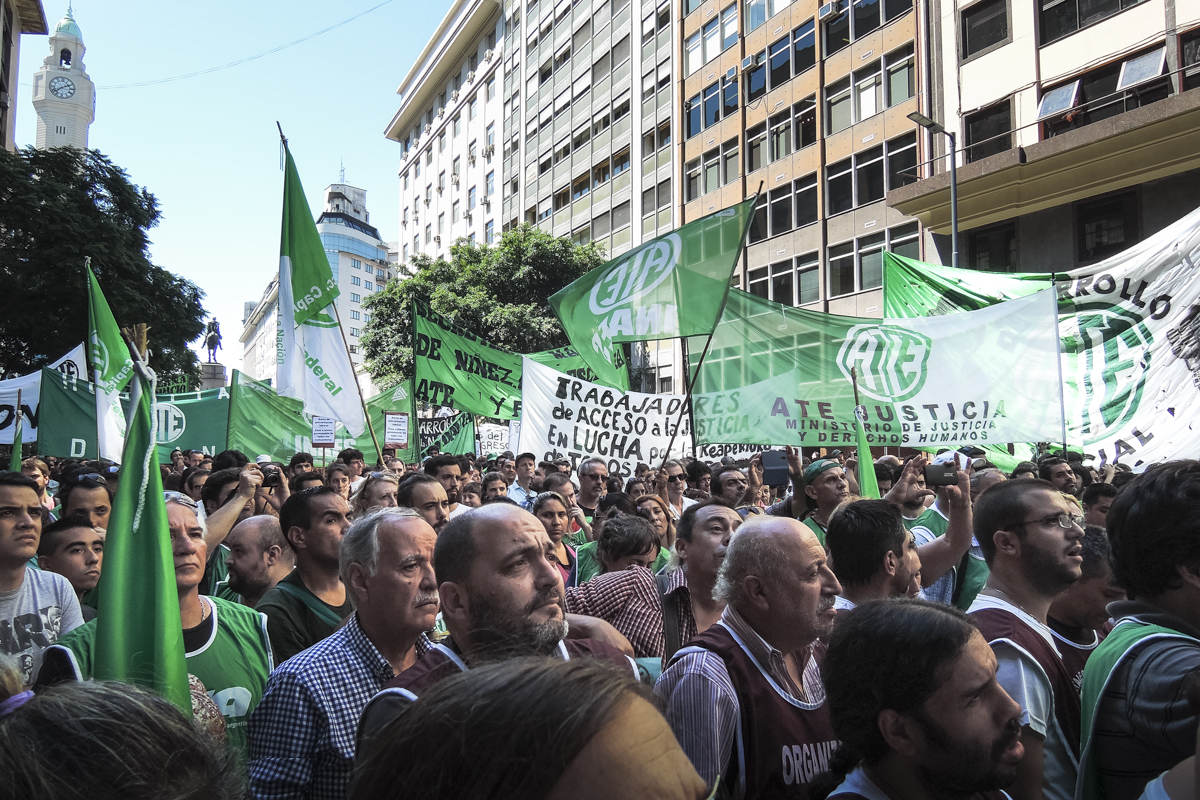 BUENOS AIRES, ARGENTINA – President Mauricio Macri had been in office for just a few months, María Florencia Alcaraz says, when she lost her job.

Alcaraz was on the editorial staff of Infojus Noticias, a state-owned press agency for legal news. Everything changed when a few strangers entered the room, she says.

“They sat at our computers and began to look at what we uploaded and did,” Alcaraz says. “We gave up our passwords to them and we explained to them how to upload the articles.”

The transition felt sudden and hostile, she says, adding that she was told that she could no longer cover gender issues, which had been her focus area.

“Afterwards they censored one of my interviews and, finally, they erased our work from the website,” Alcaraz says.

The publication’s newly-appointed editorial director promised that there wouldn’t be any layoffs, but Alcaraz says she received her termination notice on Feb. 26.

I live alone, my mom is retired and, after the first of April, I won’t be able to pay the rent. And with thousands of layoffs, it will turn out to be very difficult for me to get another job. Melina Gondar, a one-time government employee who says she was laid off in February

In the months since Macri was inaugurated, about 30,000 government workers nationwide have lost their jobs, according to data from the Asociación Trabajadores del Estado, Argentina’s state workers union. Nine thousand of those people worked for the national government and the government of the city of Buenos Aires, the labor union confirms. The others worked for provincial or municipal offices.

Many of those workers say they lost their jobs because their political ideologies don’t align with the current government.

Representatives of the Ministerio de Modernización, the government body in charge of reviewing and confirming all contracts for state employees, did not respond to Global Press Journal’s interview requests.

Daniel Catalano, general secretary of the labor union’s executive council for the city of Buenos Aires, believes this series of layoffs has reached historic proportions because of what he says is clear discriminatory intention and the short period of time in which it’s being done.

“They have first laid off the workers that have militant participation,” he says. “Afterwards, having finished with this cleansing, they began the layoffs for the reduction of the state. There began to drop the workers that had trusted in this government, that had believed the promises of a zero poverty campaign.” 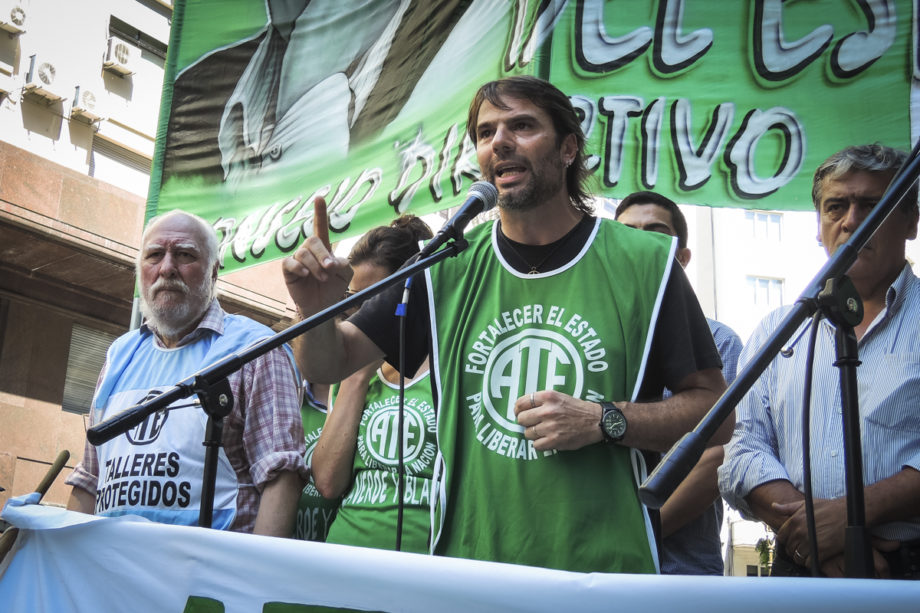 Daniel Catalano, general secretary of the labor union’s executive council for the city of Buenos Aires, speaks to protesters on March 16 at a Buenos Aires rally.

One of Macri’s campaign promises, which was called “Pobreza Cero,” which translates to “Zero Poverty,” was aimed at fighting poverty and creating jobs, according to the official campaign website.

It’s not the first time Argentina has experienced mass layoffs.

After president Juan Domingo Perón was deposed in a 1955 military coup, the following administrations enacted purges by laying off government workers who remained loyal to the former president.

There were also mass layoffs after the 1989 presidential election of Carlos Saúl Menem.

“In the end what did (Menem) do? He did what is being doing now. Massive layoffs of state workers, retirement in advance, forced retirement,” says Fernando Protto, a teacher and radio host whose show focuses on history and politics, in a phone interview.

Protto says the people being laid off now were supporters of the previous administration.

The Macri administration is more conservative than the previous administrations of Cristina Fernández de Kirchner and, her husband, Néstor, Protto says.

The administration does not value services that provide social assistance and development to the general public, which is demonstrative in the types of workers and services being cut, such as public health and education, he says.

That viewpoint is widely shared.

The layoffs are evidence of an ideological war, says Noelia López.

López says she lost her job on Feb. 26. Before then, she worked for a government health program under the country’s health ministry. She doesn’t want to publicly name the program she worked for, out of fear that friends who still work there will lose their jobs because she spoke to the press. 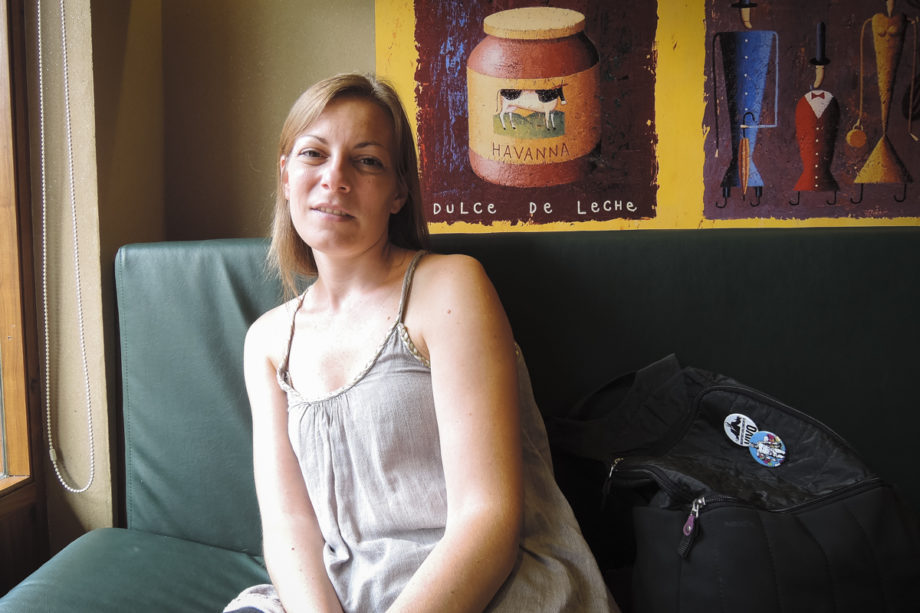 Noelia López says she lost her government job on Feb. 26. She says her layoff was due to her activity in a group that opposes the current administration.

She thinks she was forced out because she’s active in an organization called “La Cámpora,” which publicly opposes the new government.

“I used to have 10 coworkers who were active in La Cámpora,” she says. “When they began the layoffs, they began to change their names on Facebook and to block their Twitter accounts. It’s very sad that they have to hide their political ideology for fear that they’ll fire them.”

But the most alarming part of the job losses at the country’s health programs, López says, is that they’re happening as reports of dengue are on the rise. 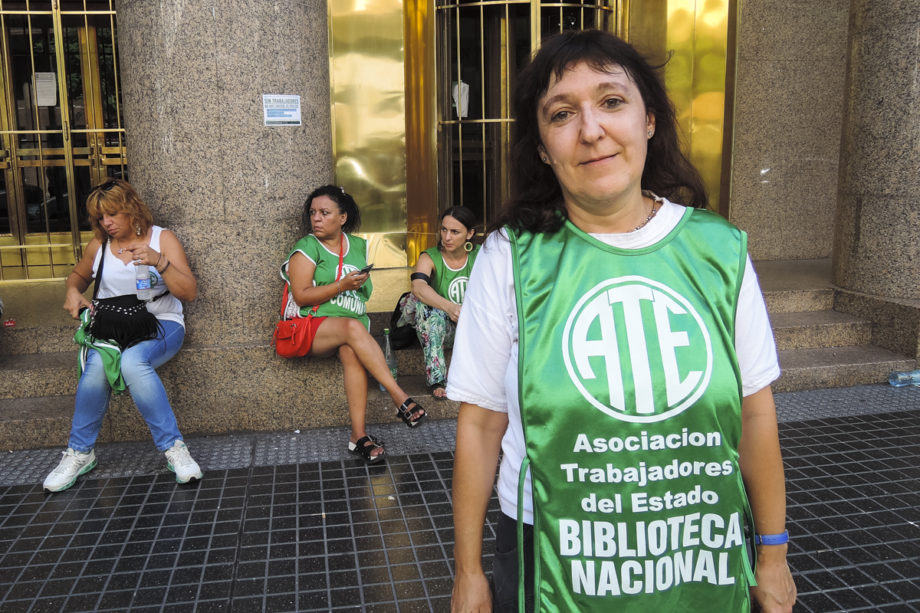 Débora Topol, a librarian, says she’s seen layoffs in her office, and is concerned about the impact to Argentine culture.

“They closed many workshops that were free, without giving a justification,” says Topol, who has worked at the library for 20 years. “The library workers that offered those courses keep going to work but they don’t have anything to do. They are afraid that they’ll dismiss them too.”

Topol says she doesn’t fear for her job, but is concerned for her country.

There are economic implications, too, for individuals and the country as a whole.

Melina Gondar was laid off from the Superintendencia de Riesgos del Trabajo, which implements laws ensuring the health and safety of workers, on Feb. 24. She says she’s not sure how she’s going to survive.

“I live alone, my mom is retired and, after the first of April, I won’t be able to pay the rent,” 41-year-old Gondar says. “And with thousands of layoffs, it will turn out to be very difficult for me to get another job.”

One strategy is peaceful occupation, he says. The union is organizing people who have recently lost their jobs to return to occupy their workstations or even entire buildings, he says. As of the end of March, those occupations had not yet begun, he says.

“We will continue fighting so that they reinstate the laid off workers,” he says.