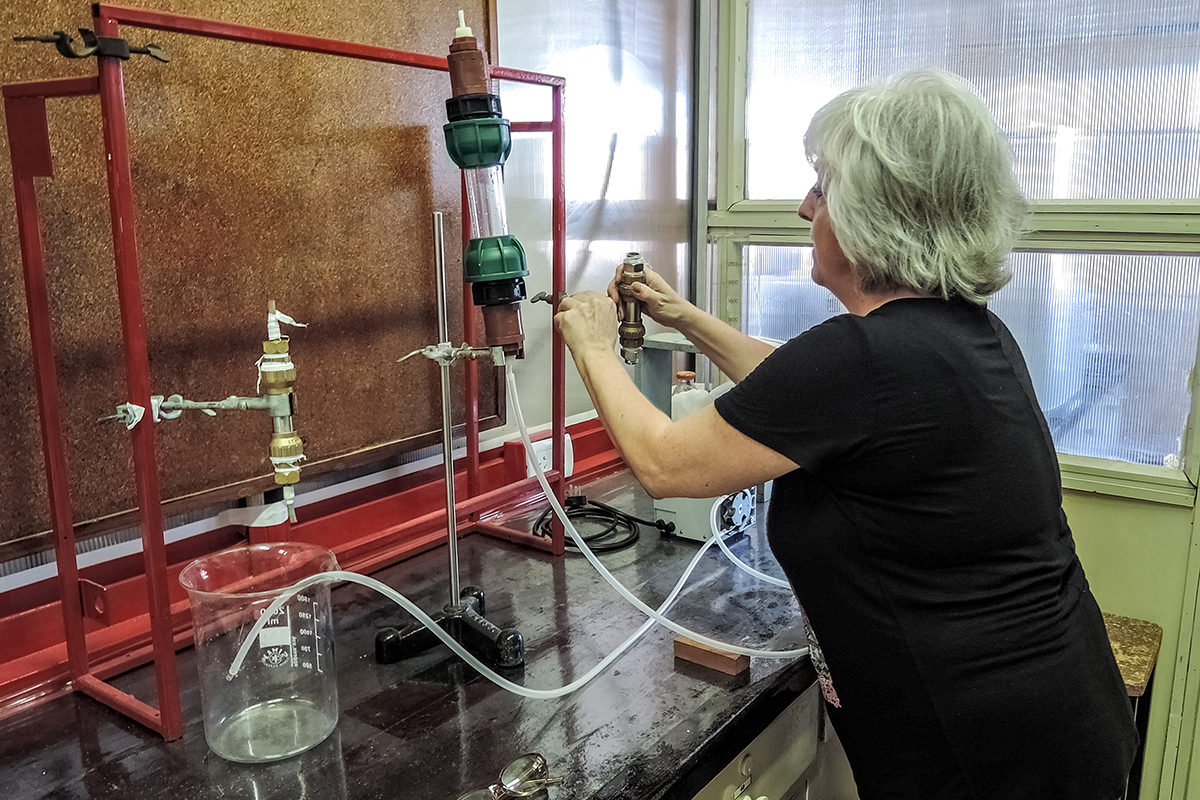 BUENOS AIRES, ARGENTINA — Susana Boeykens drifts from one side of a brightly lit room, with pipes suspended in the air and labeled jars stacked on a shelf, to a worktop on the other side. It’s scattered with test tubes, sieves, grains, coffee beans and plants.

“We have different projects of filters to purify water,” she says of different experiments.

Boeykens is one of 38 scientists at the university lab researching low-cost solutions to purify water and soils contaminated with heavy metals, including arsenic, using plants, banana peels and other organic waste. The ongoing research project, funded by the university, could improve the quality of water and other natural resources in low-income communities across the country, advocates say. 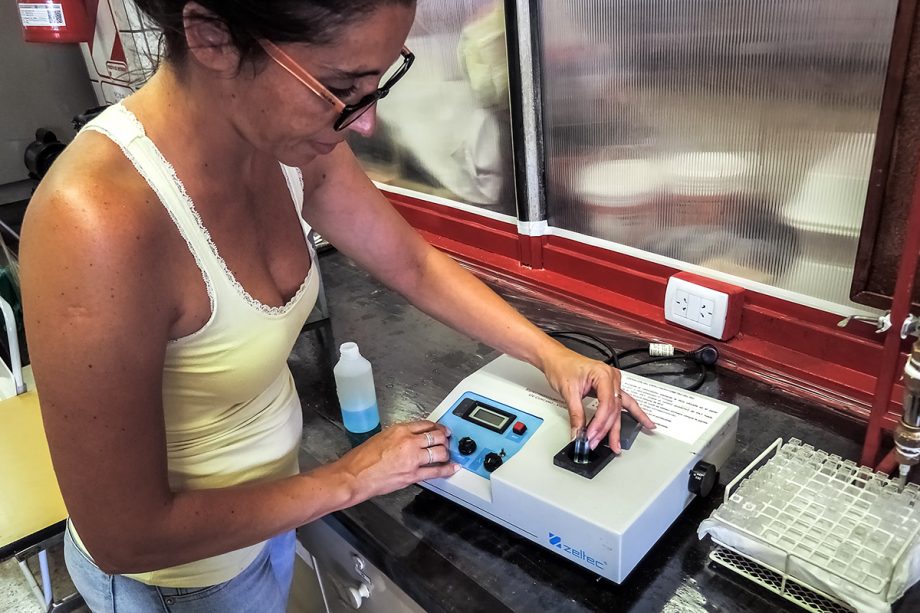 María Natalia Piol, a member of the research team at the university science lab, examines the concentration of metals in water samples before and after passing them through a filter built by the team.

Argentina’s Matanza-Riachuelo river basin, spanning 14 municipalities, is one of the most polluted in the world, with high levels of heavy metals, including chromium, mercury and lead, according to Greenpeace Argentina.

Approximately 4 million Argentines live in areas where groundwater is contaminated with arsenic, a 2015 study published in Science of the Total Environment, a peer-reviewed science journal, reveals. Consistent exposure to arsenic can result in cancer as well as neurological and cardiovascular diseases. Among those most affected by contaminated water sources are people living in rural parts of the country, who are often unaware of the health risks associated with consuming the water.

Potable water is often purified using processes that include boiling, distilling and filtering, Boeykens says. Certain types of organic waste can purify water, too, she adds. Boeykens says the project began in the late ‘90s. Since then, she’s been using organic waste to build filters that remove harmful chemicals and metals from water. The researcher says organic waste is the most common type of waste used in her experiments because it is generated in large quantities in Argentina. The World Bank estimates that every Argentine throws away 38 kilograms (84 pounds) of food each year.

Using organic waste for purification is also cost-effective, Boeykens explains. It is often available in homes and on farms. But the team of scientists also uses recycled construction materials.

María Natalia Piol, one of the scientists involved in the project, says she is using metal shavings, nails, rocks, buckets and a faucet to purify an arsenic-concentrated water source in Almirante Brown, a municipality in the Buenos Aires province.

“The objective is to filter water and turn into drinking and cooking water,” she says. “The basic problem is that when cooking, water evaporates and the arsenic concentrates.” 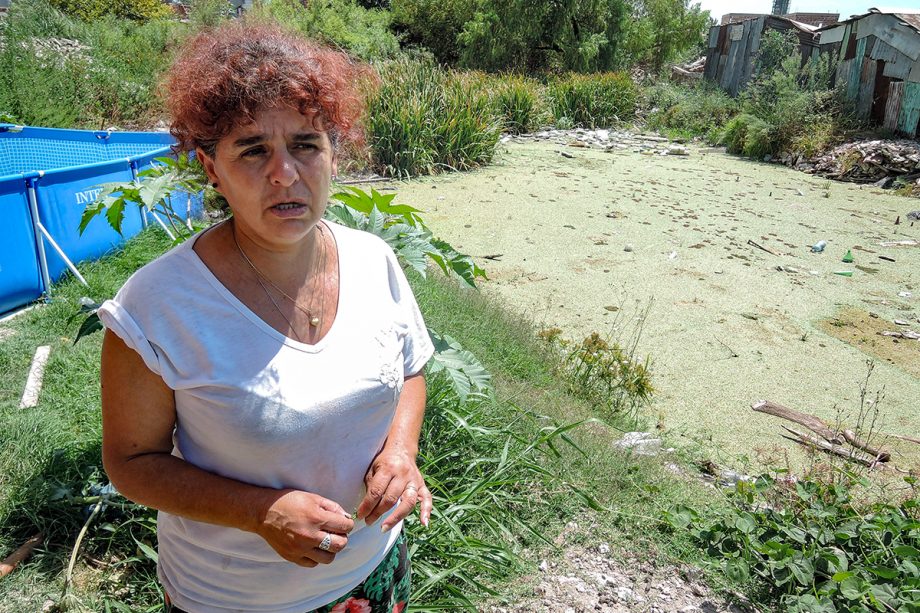 Claudia Espínola who lives in Dock Sud, a lead-contaminated city in Buenos Aires province, stands next to one of the contaminated lagoons in her neighborhood.

Local agribusinesses can also benefit from the purification methods that the scientists have created, Piol says.

“There are salinized territories where nothing can be cultivated,” she says. Purifying both soil and water at little to no cost will help farmers to improve the quality of the water used to grow their crops, make the soil fertile and increase yields, she says.

Boeykens and her team are conducting experiments to develop an additional 15 purification methods and filters. Advocates say existing methods can be used across the country to clean large bodies of water that have been contaminated for years.

People who live close to the Matanza-Riachuelo basin could benefit from the purification methods, says Andrés Nápoli, executive director of Fundación Ambiente y Recursos Naturales, a local environmental nonprofit. But purification will only be sustainable if pollution of the river is reduced, he says.

Boeykens says their purification methods are not being used by local business owners and agriculturalists because some do not understand the benefits of organic waste. The team of scientists is currently trying to sell three of the dozens of filters they’ve built to different companies, she says. They also want to donate their filters to local communities.

Claudia Espínola, a resident of Dock Sud, a lead-contaminated city in Buenos Aires province’s Avellaneda municipality, says access to such filters would enable locals to keep their communities clean.

“Everything that we can do to improve the environment is of our interest,” she says.

Since the publication of this story in April, the filters have been installed in a kindergarten in Buenos Aires, scientists from the university lab say. The university team teaches school staff and students to build filters of their own and to maintain them.

Rural communities in Argentina’s northern Formosa Province are set to benefit from the work of the scientists later this year, Boeykens says. Water sources in some parts of the province are of questionable quality, according to local environmental experts. Boeykens and her staff will install their water filters in two schools and are sampling water sources in three different communities that do not have access to running water.