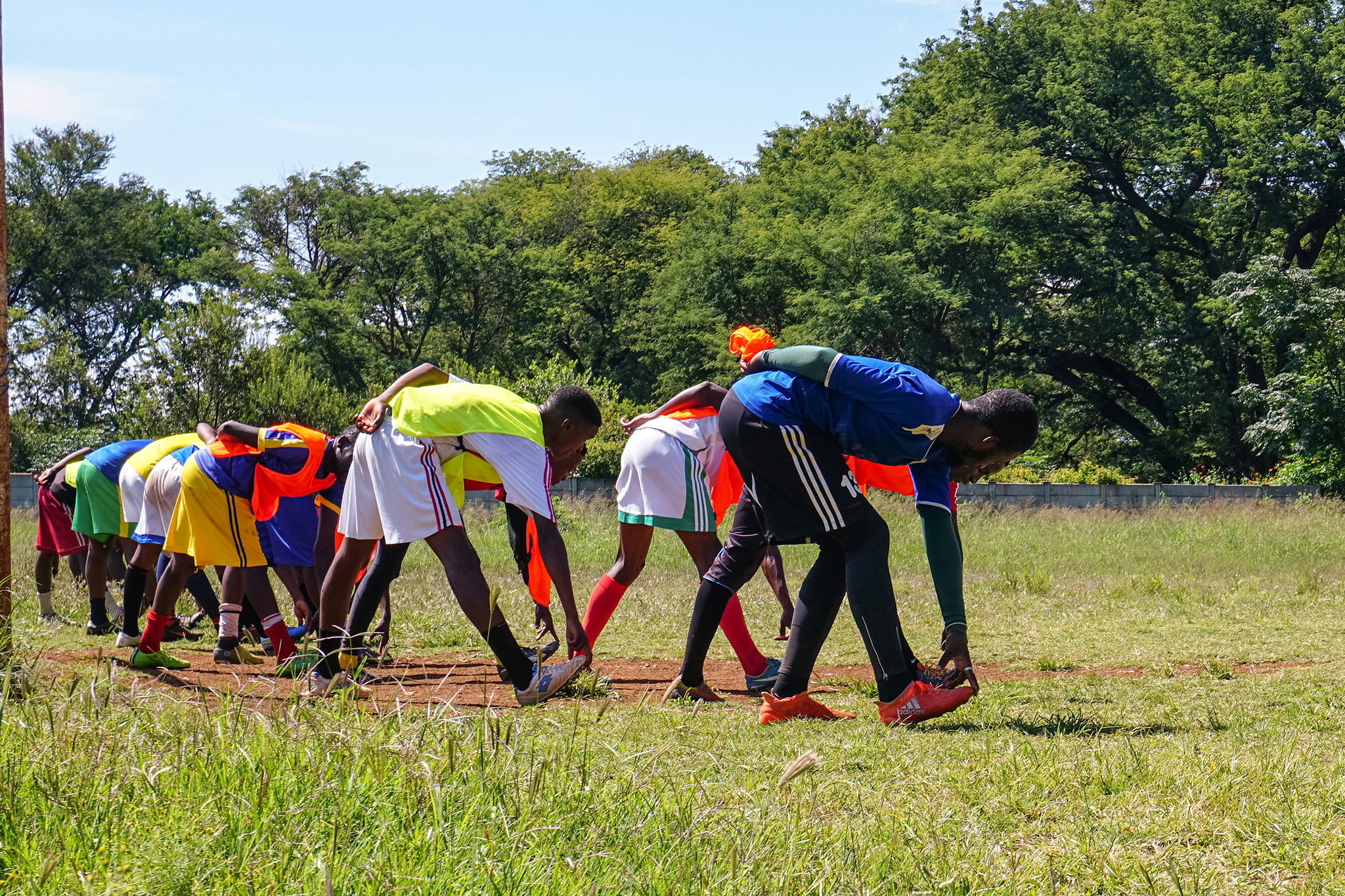 BULAWAYO, ZIMBABWE — Before the coronavirus shut down Zimbabwe at the end of March, professional footballer Dilan Shumba hung his boots around his neck each morning, left his house and headed to a nearby field to train.

The 27-year-old midfielder’s workouts were purely personal. He has no team to play for.

That’s because his club didn’t make its annual registration payment, known as an affiliation fee, required by Zimbabwe’s professional football leagues before each season. Hyperinflation has driven this year’s fees up to $5,000 for Zimbabwe’s Premier Soccer League, for example – five times higher than last season.

Some clubs can’t afford to pay. Teams that don’t pay can’t play. And their players are left without a livelihood.

The PSL delayed its scheduled March start, as Zimbabwe enacted widespread social distancing rules to stave off the coronavirus. As of May 30, the country has reported 160 confirmed cases of COVID-19, the disease caused by the coronavirus, and four deaths.

The PSL now says it hopes to open in September, pending government approval. 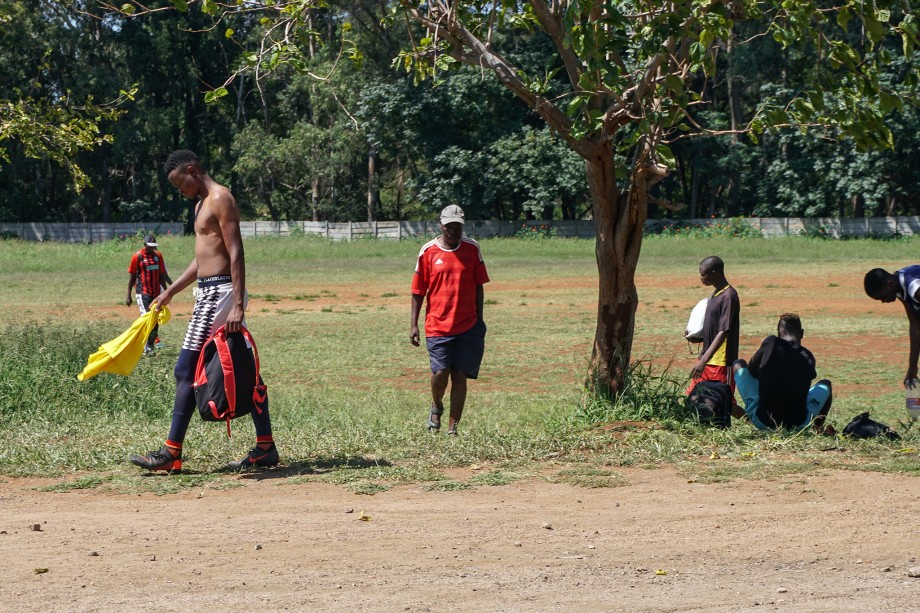 Dilan Shumba, carrying a satchel and yellow bib, walks off the field after training, before Zimbabwe enacted measures to stop the spread of the coronavirus.

The struggles of the nation’s professional football teams are a vivid example of how hyperinflation has touched every aspect of life in Zimbabwe – including its most treasured pastime.

Over the last two decades, some major sponsors have abandoned Zimbabwean football. The sport’s struggles deepened three years ago, when the country’s latest bout with hyperinflation began.

Since then, more sponsors have left teams. Attendance has dropped. Some of the nation’s best players have fled, seeking better opportunities around the world. And leagues raised affiliation fees.

“Economic challenges are affecting everyone, so yes, some clubs are having challenges paying,” says Kennedy Ndebele, chief executive officer of the PSL, Zimbabwe’s top-tier football league.

Ndebele says he hopes teams that missed the original Feb. 27 deadline will pay before the season starts. He declined to say how many clubs have not yet paid.

Across the professional football leagues, teams financed by sponsors – which include government entities and major corporations – generally come up with the affiliation fees. But clubs owned by individuals have a harder time, says Busani Nhali, who has worked with the Zimbabwe Football Association as well as the country’s Sports and Recreation Commission. Of the PSL’s 18 teams, five are owned by individuals.

Running a club is expensive for one person, as travel, accommodations, fees and operating expenses can cost tens of thousands of dollars per season, says Marylin Moyo, spokesperson for a football club in the PSL. Her club, owned by an individual, has yet to pay its affiliation fee, and Moyo did not want to publicly disclose which team she works for.

“Financially, it is strenuous to run a team as an individual as you directly fork out money from your pockets and family resources,” says Siphambaniso Dube, who owns the Ajax Hotspurs, in Zimbabwe’s Division One league. “Getting sponsorship or general funding is difficult, as the economy is volatile.”

The PSL’s challenges impact about 900 employees, including 450 players. Altogether about 9,000 people work for the teams in Zimbabwe’s four professional leagues.

Shumba, who has played in the PSL for three years, and his wife, Mary, now live on savings and her earnings as a tailor. They stretch to pay rent and school fees for their two children, ages 5 and 10.

“This development puts a strain on our livelihoods,” Mary Shumba says, “especially with the economic situation in the country.”

Financially, it is strenuous to run a team as an individual as you directly fork out money from your pockets and family resources.Siphambaniso Dube, who owns the Ajax Hotspurs

Dilan Shumba says being without a team is new for him, but he’s optimistic about joining another club in Zimbabwe. If he doesn’t, he says, he’ll head to South Africa or Botswana once the coronavirus outbreak subsides.

Tapiwa Ndlovu, a goalkeeper for the Mushowani Stars in the Division One league, says rising affiliation fees have robbed players of a sense of security.

“One of the biggest challenges is that as a footballer, you can be training in a club during preseason, with the hope that when the league begins, you have a job,” he says, describing his experience with a previous club. “After about two months of training, you are told the club failed to pay affiliation fees. Then you are stuck.”

Disappointed by such behavior, players feel no loyalty to clubs, Moyo says. The footballers just want to be discovered by a better team, or by an international scout.

“It is no longer about the game of football for most players and clubs – it’s about survival,” she says. “Most clubs make money from selling players, and at the end of the day there’s not much effort put in the game itself.”

Dube, for example, says he only gets funds when he sells players.

“The economic situation has also affected the game of football in the country, and even companies that have the potential to sponsor are struggling themselves,” Nhali says. “Football clubs will need to be creative in finding ways of raising money for themselves.”

Editor’s note: Marylin Moyo and Fortune Moyo are not related.