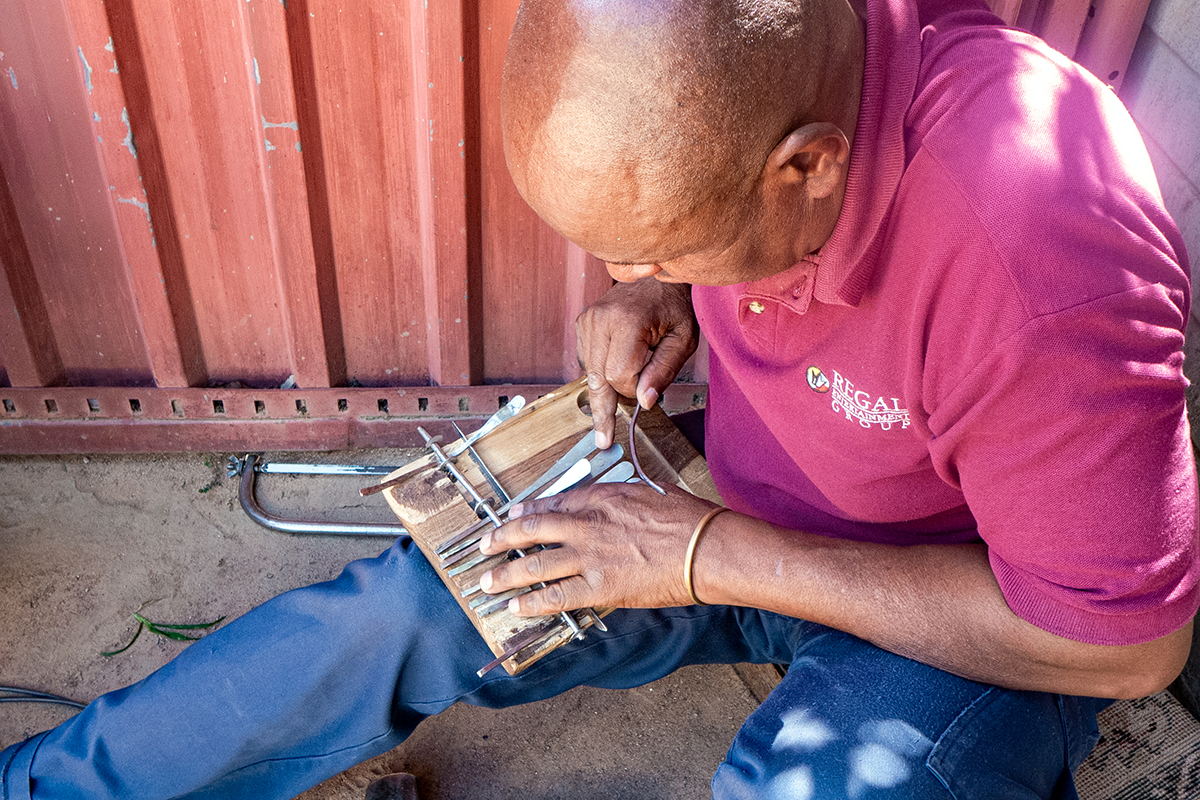 HARARE, ZIMBABWE — A dull banging sound vibrates through the floor as hammer and metal meet. Sitting on a low wooden chair with his head cocked a little to the left, Newton Cheza Chozengwa incessantly pounds away at a piece of metal.

Chozengwa is halfway through making several dozen metal tines that he will later attach to a wooden sounding board. The finished product is known as the mbira, a traditional musical instrument found throughout Africa but most closely associated with the Shona people, a group that constitutes the majority of Zimbabwe’s population.

He plucks the metal tine that he’s just affixed to a wooden board, pauses for second, and then grunts. To the untrained ear, the key sounds fine. But to him, the sound isn’t quite right.

“I hear the sound in my head and until that key can produce that exact sound, it isn’t ready,” he says, taking up the hammer once again. 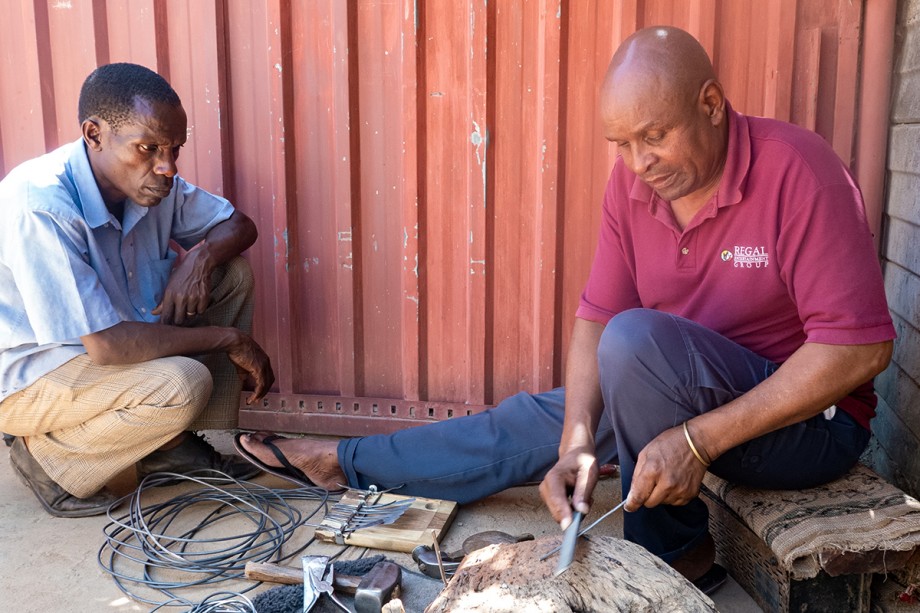 Samson Goriati (left) watches Newton Cheza Chozengwa as he puts together pieces of an mbira.

The 67-year-old is known as Sekuru Matemai in the music industry. He makes mbiras and also composes mbira music. Sometimes, he says, people who hear his music fall into a trance.

That’s not unusual when it comes to mbira music. The instrument is often used in traditional Shona ceremonies. Many Shona people believe that the sound helps them connect with their ancestors and that people who play the mbira are supernaturally gifted.

But even among this special form of music, Chozengwa stands out. His eyesight has been deteriorating for years, so he builds each mbira by listening to the sound of his hammer against the metal and feeling each piece of the instrument as he goes along. The result is something special. His instruments are prized possessions in homes both in and outside of Zimbabwe.

Chozengwa says his love for the mbira existed long before he started making it.

“I would have visions at school,” he says. “People would assume I was asleep, but I kept seeing the instrument being handed to me.”

When he was 15, his mother took him to a medium. There, Chozengwa held a mbira for the first time and decided to turn his love for it into a career.

In 2005, Chozengwa put together a three-member band called Matemai Mbira Group. Since then, the band has performed locally and internationally at traditional ceremonies and concerts.

Chozengwa’s fans around the world include Melissa Cara Rigoli, who is based in California. She says she met Chozengwa in 1999, when she heard him perform. Mesmerized by the sound of the mbira, she later founded Santa Cruz Mbira, an organization that promotes mbira music in Santa Cruz, a city on California’s coast.

Many of the mbira lovers in Rigoli’s community own instruments that Chozengwa made, she says.

“At times there can be specific demand for mbiras made by Matemai,” Rigoli says. “Often when I tell people I have mbiras made by him for sale, their eyes light up with interest.”

When Chozengwa is not on the road, he’s at home, working on customer orders. It takes about two days to make one mbira, he says. Each one sells for between $225 and $275. 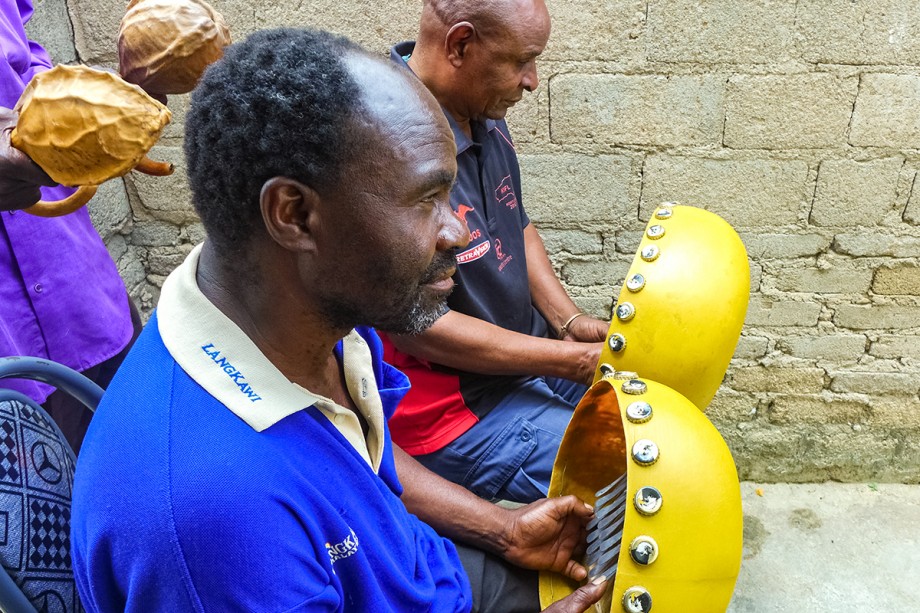 Newton Cheza Chozengwa (in red and navy t-shirt) created Matemai Mbira Group more than 10 years ago. Lameck Putse (in blue t-shirt) and Samson Goriati (in background) are his bandmates.

“His mbiras have a true sound that some makers fail to achieve and most have forgotten as time has gone by,” says Samson Goriati, one of Chozengwa’s bandmates. “[Chozengwa] fashions his mbiras with a slight difference on the bottom keys which are supposed to produce a more authentic sound.”

The mbira typically has between 22 and 28 keys. Instead of making the metal tines flat, as most mbira makers do, Chozengwa adds an upward arch called a spine to seven of them. Chozengwa places the keys with the arch below the rest.

Chozengwa’s wife, Hellen Seremwe, says this technique is what makes his instrument sound different from others. The sound takes listeners on a spiritual journey, she says.

“I have been told that people have encountered spiritual possessions or trancelike states when hearing music played from Matemai’s mbiras,” she says. “It doesn’t matter whether it is Matemai playing or another person, his mbiras carry his gift to others.”

Kudzai Mazvarirwofa, GPJ, translated some interviews were translated from Shona.