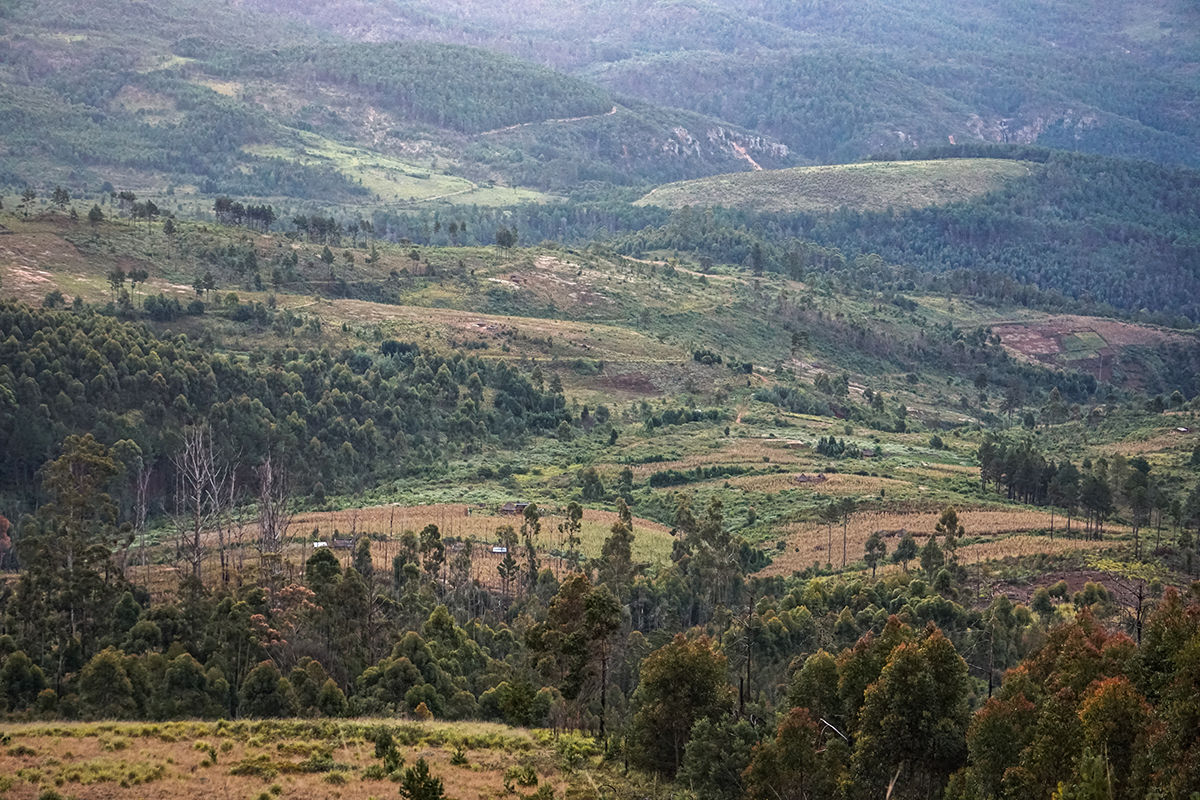 CHIMANIMANI, ZIMBABWE – Dennis Mwaimboti, a communal farmer, ekes out his living beneath scores of giant pine and eucalyptus trees.

He stays busy gleaning his yields from last season and clearing the land on the Gwindingwe Timber Estate in Chimanimani, close to the border with Mozambique in southeastern Zimbabwe.

But his harvest isn’t much. The soil he is trying to grow maize on isn’t suitable.

“The land is not really productive, and every harvest we do not get enough to even last us up to the next harvest,” he says.

Mwaimboti settled on the estate in 2000, after then-President Robert Mugabe passed major land reforms. The controversial laws allowed for farmland to be redistributed without compensation from white settlers to black Zimbabweans, particularly those who fought in the war of independence ending in 1980, known locally as the Second Chimurenga. The years following the 2000 land reform were known as the Third Chimurenga.

Like many of his neighbors, Mwaimboti does not believe he is committing a crime by tilling and clearing the land, sometimes razing it and setting fires to remove brush. But the owners of the estate, Allied Timbers, say he and others are settling on the land illegally. They warn that these dwellers are putting the industry at risk by reducing the number of trees and harming the quality of the soil.

At least six million tons of timber are consumed annually for fuel, about 1.4 million tons more than Zimbabwe’s forests can sustainably provide, according to a 2014 report from Zimbabwe’s Ministry of Environment, Water and Climate. That means Zimbabwe is losing 330,000 hectares (more than 815,000 acres) of forest – over 60 million trees a year. The current planting rate is about 8 million a year.

Timber remains a lucrative business in eastern Zimbabwe’s Manicaland province. But industry officials fear that time is running out for timber processing in the country because the activity of illegal settlers is hampering their ability to earn profits and replenish their stocks.

Willcort Dzuda, acting Chief Executive Officer for Allied Timbers, one of the largest timber growing and processing companies in Zimbabwe, says the presence of the illegal settlers has many negative consequences. He lists the loss of planted trees that are being harvested by the settlers for their own use as a primary issue. Some even sell the trees for their own profit. He adds that others start fires unnecessarily, causing damage to the trees.

Dzuda says there are both illegal and legal settlers within their plantations.

“It’s difficult to establish, but we estimate a total of around 1,300 families in total covering both legal and illegal settlers by end of 2018,” Dzuda says.

These settlers, often referred to as squatters, move around in search of land suitable for farming. This often leads to land disputes, cutting down of timber forests and land degradation that results in reduced timber supply.

The inability to control legal access and usage of the nation’s timber land puts it at risk of collapse, some observers believe.

Dzuda says the number of settlers has been growing rapidly since the government land reclamation program began. He says his company has been working with local authorities to manage the settlement issue.

“We have been receiving assistance from the police through the courts to get relief with success at times,” he says.

Dzuda says Allied Timbers has been making a positive contribution to the community.

“Even in the current depressed economic circumstances, the forests owned by Allied Timbers alone support more than 1,400 direct jobs,” he says.

But Dzuda says the company cannot control the activities of people who operate independently. When settlers set fires to clear brush or for other purposes, the results are often disastrous.

“In 2018, we had 53 fires that burnt 262 hectares (647 acres) while in 2017 we had 40 fires that destroyed 326 hectares (806 acres). The general growth in number of fires is attributable to the increase in the number of settlements within plantations,” he says

The settlers refute claims that they are having negative consequences on the industry. Their primary focus is to earn a living to support their families.

“I used to buy timber sufficient for a one-roomed cabin for $60, but now [it costs] about $700 Zimbabwean dollars for the same amount of timber. Yes, the economy has worsened the situation, but the timber is also running scarce,” he says.

Mwaimboti says if the government provides alternative land, he would be willing to move. But he foresees a big problem with that option.

“We cannot go back to where we came from because if you spend more than five years away, the village head allocates your land to someone else,” he says. “So we do not have anywhere to go back to.”

Regardless of their eventual fate, Timber Producers Federation chief executive officer Darlington Duwa says the problem of illegal settlers must be dealt with.

If it is not controlled, Duwa estimates that in about five to eight years’ time, Zimbabwe could be forced to import timber.

Linda Mujuru and Evidence Chenjerai, GPJ, translated some interviews from Shona to English.