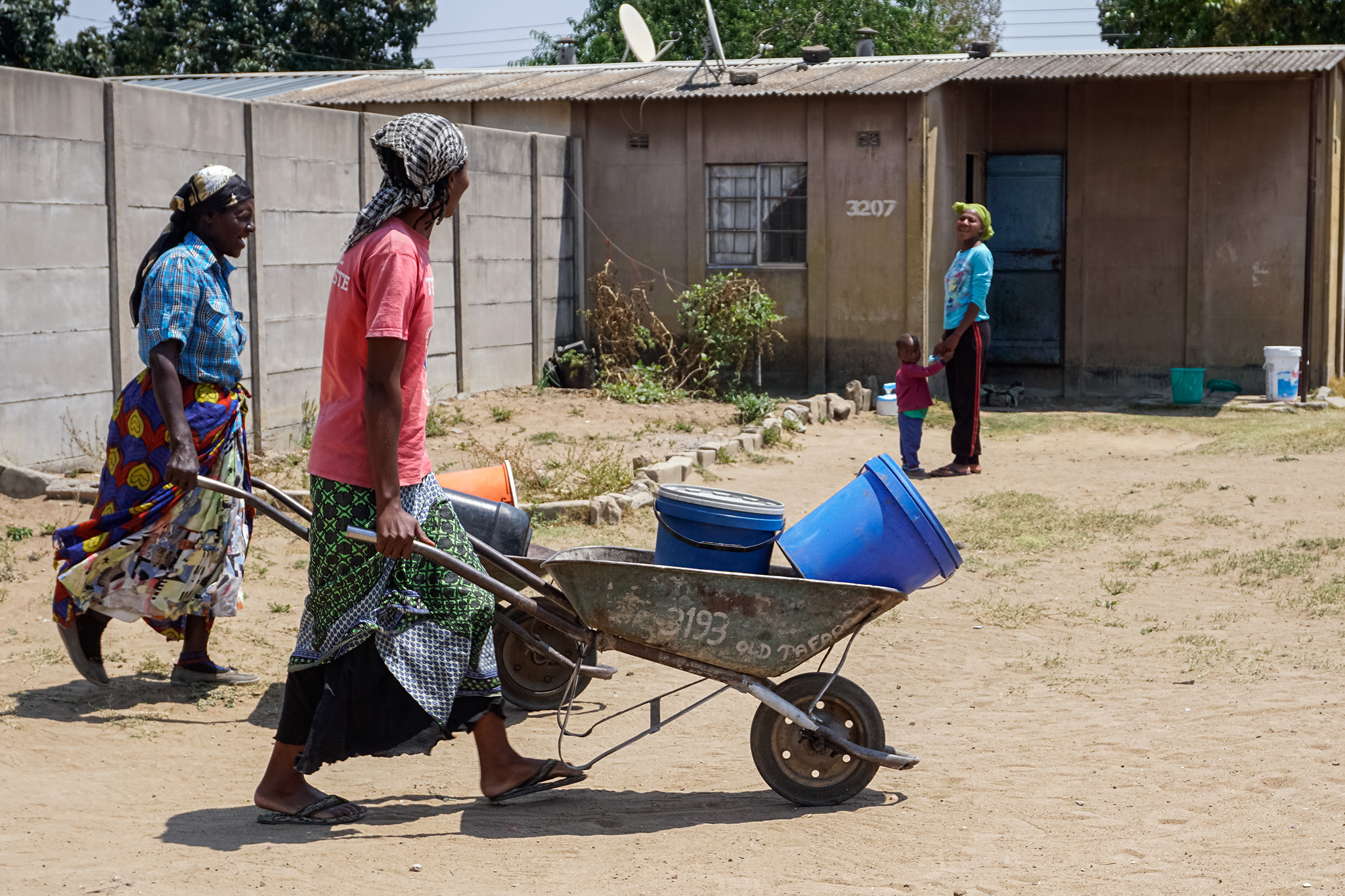 HARARE, ZIMBABWE — Tafara is hot, and the waves of heat are visible. In this suburb, 23 kilometers (14 miles) outside Harare, 70-year-old Sarah Ziruwere pushes a wheelbarrow full of empty plastic barrels and bottles. She’s heard there’s a well that still has water.

Ziruwere is not alone. In this suburb of 5,500 households, other residents walk with buckets in search of water.

“We are suffering. When you wake up, you start to ponder on where you should go to get water. When you get a 20-liter bucket, you have to use it sparingly because it is hard to get,” says Ziruwere.

There is a borehole with water nearby. However it is only accessible for users who can afford a monthly fee of 15 Zimbabwean dollars (ZWL) (89 cents). In some cases, where a generator powers the pump, users are charged 1 ZWL (6 cents) per bucket.

Ziruwere has no regular income. Under normal conditions, the city council would provide water for a less costly fee. Instead, people must pay for water daily – unaffordable for many, given Zimbabwe’s economic difficulties.

Ziruwere says many people, including her, get water from a stream, which also contains sewage. She believes it has affected her family’s health.

“My grandchildren are always complaining of stomach pains, and I highly suspect it’s because of the water that we are getting in unsafe water sources,” Ziruwere says. 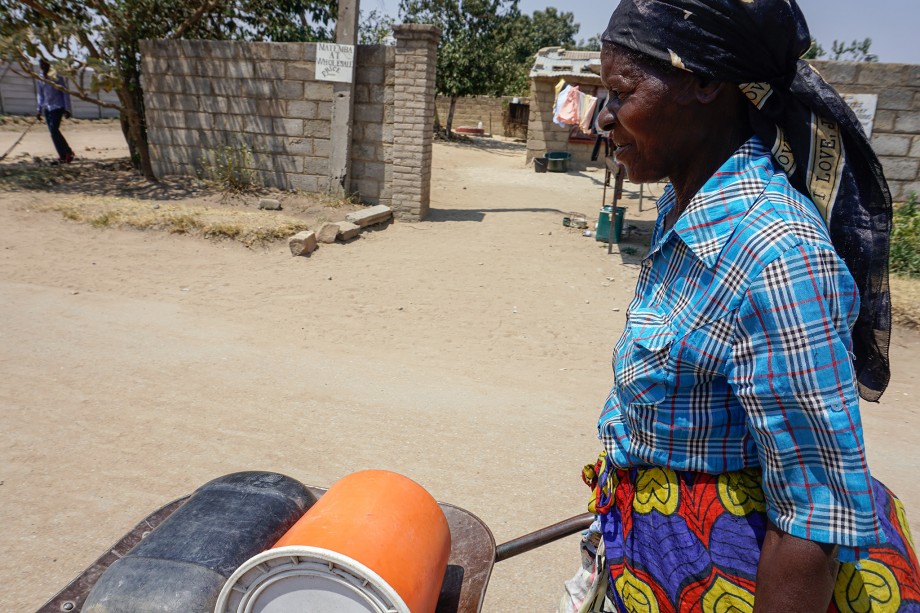 Sarah Ziruwere, 70, pushes a wheelbarrow in search of water in the Harare suburb of Tafara. Tafara is just one of Zimbabwe’s suburbs which have not had a regular supply of water due to a lack of infrastructure.

Tafara and nearby Mabvuku are just two of many Zimbabwe suburbs that have not had a regular supply of water for years, either because the infrastructure is old or, in the case of new settlements, has never been built. Some suburbs have community boreholes, but they require electricity, and power cuts have made them unable to pump water.

Zimbabwe’s constitution states that every person has the right to safe, clean water. But most residents of Tafara have had to find water by digging their own wells. However, because of an ongoing drought, many wells have dried up. Residents are left with few alternatives, and some have sought water from unsafe sources.

According to the Harare City Council website, the city’s water infrastructure was originally designed to supply 350,000 people and was last upgraded for 1.5 million people in 1994. Since then, the population has almost doubled to 2.9 million, but there has been no comprehensive upgrade to the water infrastructure.

“We have been making repairs and refurbishments to the existing infrastructure, but we cannot continue doing that anymore, because the population has grown and the infrastructure is overloaded,” says Mabhena Moyo, acting director of the Harare water department.

Due to poor infrastructure, water leaks are rampant, and according to the city council website, 60% of water is lost through bursts and leaks.

Moyo says lack of infrastructure improvement is due to funding shortages from the Harare City Council, which has struggled to collect revenue from residents.

He says changing the infrastructure is a huge project that will require resources. The city has signed agreements with Chinese companies to improve infrastructure.

In the meantime, lifelong Tafara resident Sarah Matenga says she survives with water from streams.

“The water is dirty, but there is nothing that we can do about it. Sometimes we sleep at borehole queues and fail to get the water, because the better part of the day, there is no power,” she says.

Matenga says she requires at least 160 liters of water per day for her family of five. To save money, she only buys 20 liters of clean water for cooking and drinking. The rest she gets from open wells and streams.

“Our taps in this whole neighborhood do not even drip water, even when others get water supply. They should at least fix our pipes, which have been dysfunctional for more than 10 years,” she says.

The Harare City Council’s environmental management committee chair, Kudzai Kadzombe, agrees that the issue in Mabvuku and Tafara is infrastructural, and she adds that population density puts pressure on the system.

“These houses were constructed for small families, which had capacity for housing two to three people, but now as you go there, you will see that a there are about four families, maybe with three members each and maybe a total of 15 people staying in one household,” she says. “The infrastructure was not meant for that, and this is why you see that there is a lot of water and sewer bursts.”

She adds that underground water is depleting fast because demand is high and that the city is trying to rehabilitate boreholes in the suburb.

Moyo says even when the water utility is producing at capacity, it only meets about 60% of demand. He says Tafara and Mabvuku have been affected because water production has gone down due to drought and pollution in major water sources.

A 2012 World Bank report estimated that the Harare water system would only need to produce about 600 megaliters of water per day to serve city residents, somewhere between 2 and 3 million people. But Moyo says the real demand is much higher due to an estimated 2 million people who come to the city to work and visit.

“If we are producing a maximum capacity, we should produce about 704 megaliters per day, but our demand is at around 1,200 megaliters per day. So basically our supply cannot meet demand with the present installed capacity,” he says.

Moyo adds that the suburbs like Tafara and Mabvuku are located 60 kilometers (37 miles) from the main waterworks, and when there is a water shortage they are the first affected due to the distance.

However, he says they have started cutting water supply elsewhere for two days a week, to supply communities like Tafara and Mabvuku. However, residents say not every household gets water and most do not have access.

“We will need to look at some pocket areas that have not been receiving water, and we will try and work to see if that can be rectified,” Moyo says.

“The government must find a way to fix this problem,” she says. “We do not know if the water sources no longer have water or not. They should at least fix our pipes so that we get water and also put up more boreholes.”

Gamuchirai Masiyiwa translated some interviews from Shona to English.