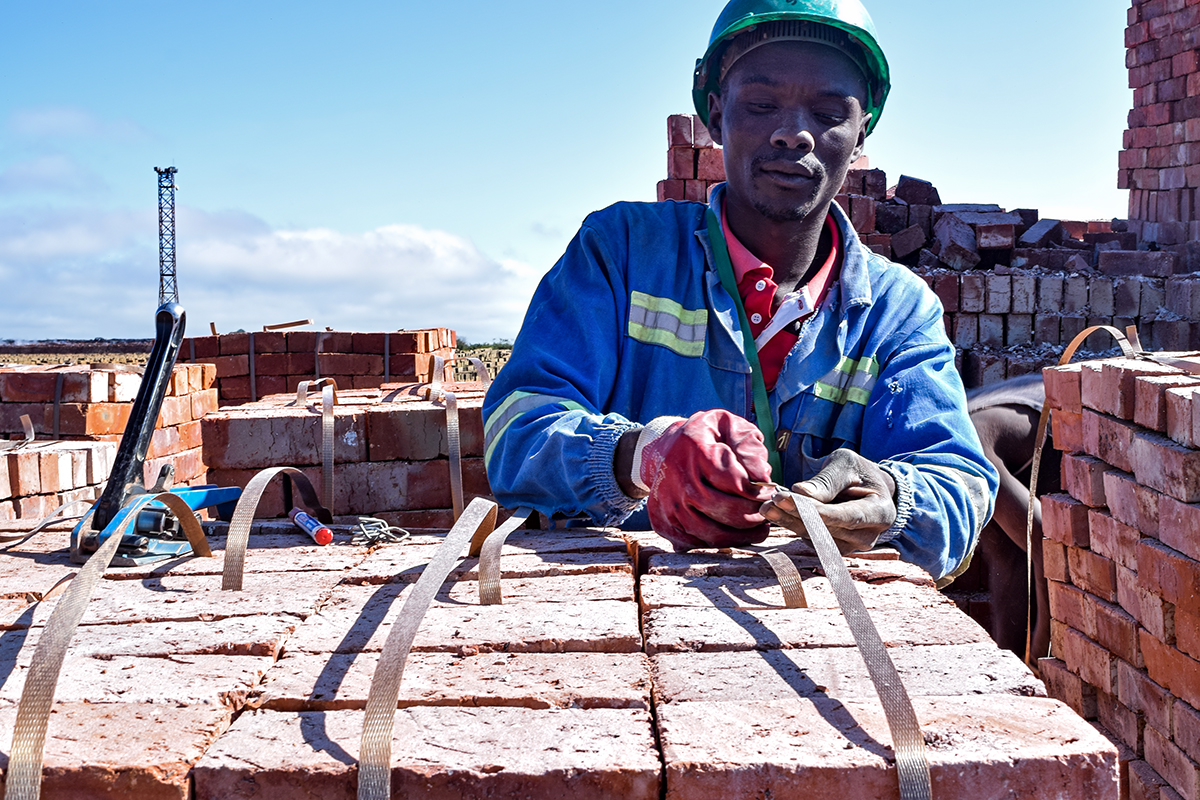 HARARE, ZIMBABWE — Inside an industrial space, big bags are piled high with white and brown chips of plastic. Rolls of brown straps are stacked, as noisy machines radiate heat.

Muruwe Private Ltd. is a local company that recycles bottles made from polyethylene terephthalate, or PET. It turns them into plastic strapping, commonly used in Zimbabwe as packaging for beverages such as soft drinks and alcohol.

Local employment and the environment are at the heart of Muruwe’s mission, the company says.

Tendai Bvumba, production manager at Muruwe, says the company is focused on recycling brown PET bottles, which tend not to get recycled because of the color, he says.

These bottles, which once held Super Chibuku, a popular alcoholic beverage in Zimbabwe, will soon become plastic strapping to bundle bricks. Strapping is used to bundle the bricks to protect them from breaking and to ease transport and stocking.

“We chose to recycle brown plastic bottles because, if you move around, you see brown PET lying everywhere,” Bvumba says. 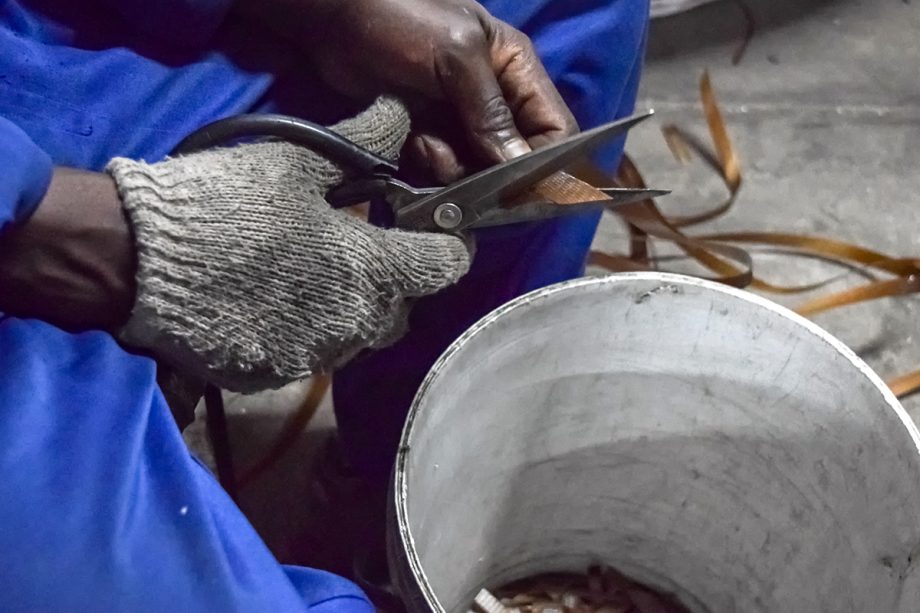 Kenias Mupevheni cuts off the end of a roll of plastic strapping. Scraps are recycled and reprocessed to ensure that no part of the strapping is wasted.

As Zimbabwe struggles with waste management and the high cost of imports for even the most basic of goods, local initiatives to recycle plastic bottles are creating jobs and removing stubborn waste from the streets of Harare.

Most local recycling initiatives focus on clear plastic waste. But Bvumba says his company is among the few working to recycle colored plastic, a primary litter culprit.

According to Zimbabwe’s Environmental Management Agency, waste management is one of the most pressing environmental challenges in Zimbabwe. And 18 percent of all waste generated here is plastic.

Zimbabwe produces an average of 2.5 million tons of solid waste every year, according to a 2010 assessment. A 2010 analysis produced by three agencies suggests that at current rates, the population will generate more than 5 million tons of waste by 2030.

As Zimbabwe struggles against an economic crisis that has resulted in mass unemployment, basic services such as waste collection have dropped dramatically, leading to an increase in illegal dumping and backyard incineration.

Muruwe is focused not only on cleaning up the streets but also on creating local opportunities, Bvumba says.

“We pay [individuals] 15 cents per kilogram [2.2 pounds] for plastic bottles,” he says, adding that the company processes about 2 tons of plastic every day.

While making plastic strapping might seem like a simple endeavor, the product is also helping other Zimbabweans’ businesses to be less reliant on imports.

As the only local recycling manufacturer of plastic strapping, Bvumba says his company is able to offer the product at a fraction of the cost of imported plastic strapping from Zambia or South Africa.

Michael Ellis, general manager of logistics at Beta Holdings, a company that makes bricks and tiles, says he uses plastic strapping to bundle bricks together in packs of 500. He says the brown strapping, which is locally made and recyclable, has made a huge impact on his business. 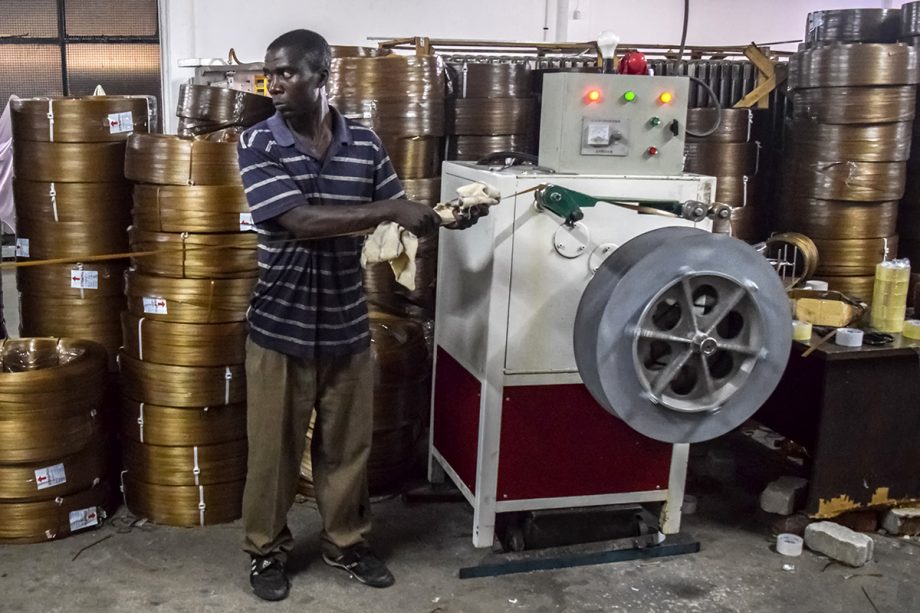 The cost of importing a roll of plastic strapping is $72, he says. It also requires three months lead time to order. The product from Muruwe costs $48 and can be picked up the next day. The U.S. dollar is Zimbabwe’s primary currency.

“In a month, we use an average of about 500 rolls of strapping,” Ellis says, adding that Muruwe buys back the scraps to use again.

Next, Bvumba says his company will explore exporting its product. With one order for 580 rolls from a company in South Africa already made, he says there could be great potential to increase the scale of the business.

While the company is making strides, local officials say that more needs to be done to control plastic waste.

“We are grateful that we now have a local company that is specifically recycling the brown PET bottles into strapping that is used for packaging,” he says.

But the efforts of one company are not enough to solve the problem, Kangata says.

“The level of mopping up PET is still very low,” he says. “Just 25 percent of the PET is being recycled at the moment,” he says.

Gamuchirai Masiyiwa translated some interviews from Shona to English.