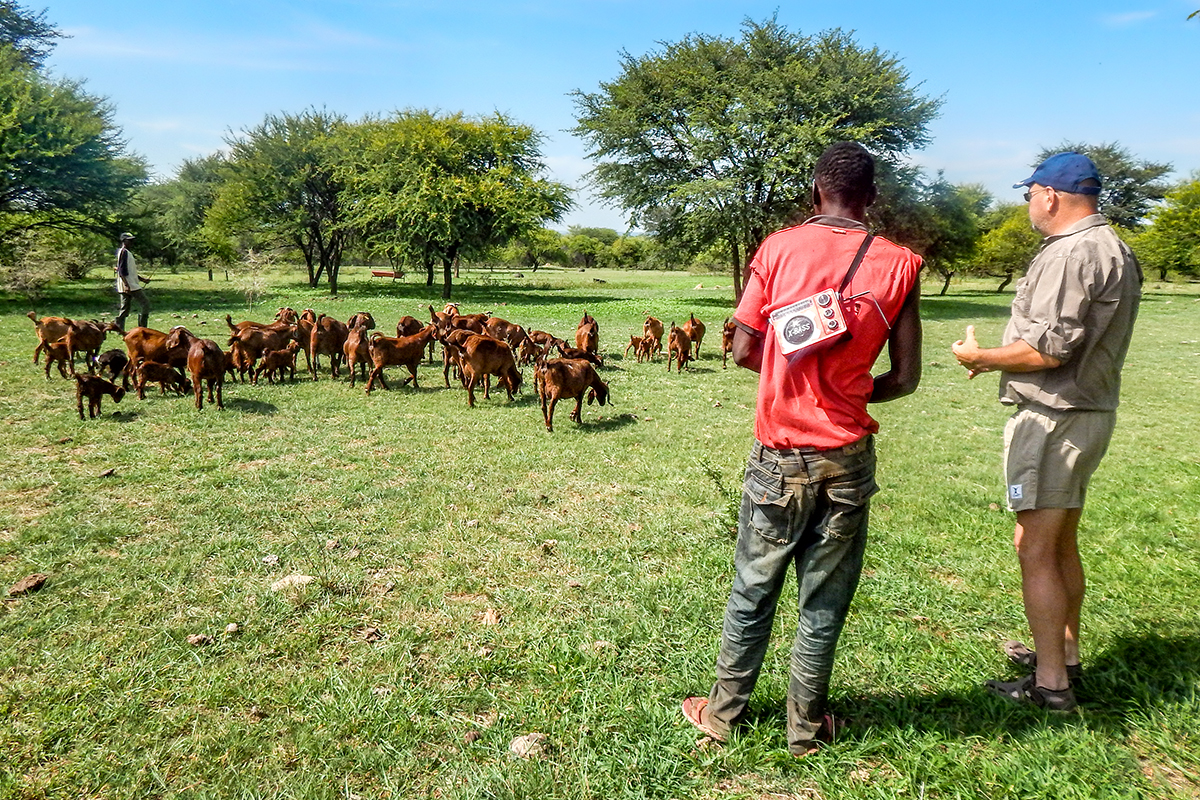 BULAWAYO, ZIMBABWE — Chris Grant can easily tell when one of his baby goats is unwell.

When he spots one with its head hanging low and eyes drooping, he carefully picks it up and inspects it before instructing one of his workers to administer an injection to deworm it.

Grant, a livestock farmer since 1993, raised cattle for nearly a decade, but in 2000 he started rearing goats after noticing changes in Zimbabwe’s climate.

Goats are more adaptable, he says.

“Rearing small livestock, like goats, preserves my livestock assets because cattle are less tolerant of drought conditions, but goats can survive,” he says.

Livestock production in the Matabeleland region – where Bulawayo, Zimbabwe’s second-largest city, is located – is threatened by the ongoing drought. Grass no longer grows here as it used to, leaving larger livestock like cattle with nothing to graze on.

“Due to climate change, the region has low rainfall that leads to dry land, and livestock have nowhere to feed,” says Justice Zvaita, program director for the Zimbabwe Climate Change Coalition in Bulawayo.

According to a 2014 survey, 82 percent of smallholder farmers in the Matabeleland region have noticed drastic changes in rainfall patterns over the last several decades. Their observations about climate, in a study published in The International Journal of Humanities and Social Studies, are backed up by rainfall data from the area.

The changing climate has forced many cattle farmers in Bulawayo and throughout the Matabeleland region to sell off their cattle – typically to butchers – and to turn to small livestock such as goats and sheep.

Historically, cattle are a symbol of socioeconomic status in Zimbabwe, and some farmers refuse to downsize their cattle for fear of losing status. But they say it’s becoming difficult to raise healthy cows in the unpredictable climate.

Irregular weather patterns driven by climate change are a problem across much of sub-Saharan Africa, which has also seen rising sea levels, increased flooding, drought and changes in food production.

In Zimbabwe, the main effects of climate change are rising temperatures, decreasing annual rainfall and unpredictable weather patterns. Planting season used to begin in October, but in recent years it has started in December. The biggest threats to livestock production are a shortage of pasture land, droughts and a rise in temperatures, which can lead to destructive fires.

Goats have proven less vulnerable than cattle, because they do not rely on grass alone to feed, but can also eat trees, bark and other plants. As of 2015, there were approximately 4 million goats in Zimbabwe, according to a livestock-sector report.

There is need for increased awareness about the effects of climate change on livestock, says Winston Babbage of the Zimbabwe Commercial Farmers’ Union.

Farmers need to understand the benefits of moving to smaller livestock, says Babbage, the union’s chairman for Matabeleland North province.

“Farmers need to be told to avoid overstocking of cattle as there is limited grazing land,” he says. “Small livestock takes up less land and survives better than cattle in harsh climates.”

Dingaan Ndlovu, founder of the Matabeleland Sheep, Goat and Poultry Trust, says small livestock can also be a way of empowering poor and vulnerable communities.

“Starting a goat project is much cheaper than buying cattle,” he says. “Therefore, goats are easy to manage, even for poor households, and they have faster financial returns.”

One cow costs between $350 to $500, he says, while a goat costs about $50. With a shorter gestational period, raising goats leads to faster progress.

Since cattle are  historically are associated with status in the community – the more cattle a farmer owns, the wealthier he is perceived to be – it will be difficult to get some farmers to switch to smaller animals, Ndlovu says.

But Anglestone Sibanda, who trains farmers to raise goats, says he is seeing progress.

“Some cattle owners are beginning to understand the effects of climate change on their cattle and are diversifying into small livestock,” he says. “We train them to change their mindset.”

And goats have other benefits. Grant says his goats help restore land by fertilizing it.