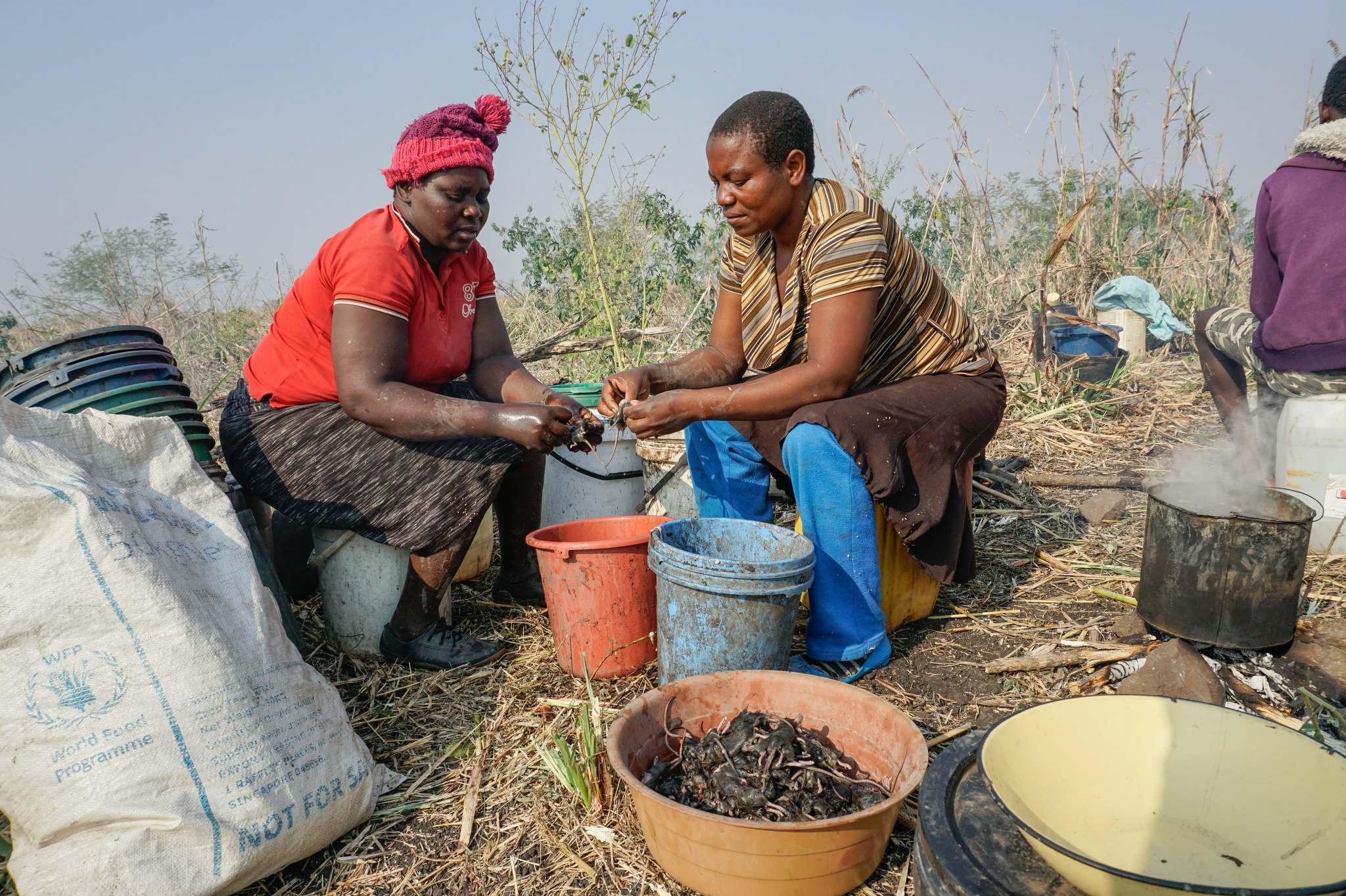 CHISUMBANJE, ZIMBABWE — Remeredzai Mashakwari reaches into a bucket and pulls out a small, dark-gray rodent. With a sharp stick, she opens the tiny animal’s stomach, and guts it. When she’s done with the remaining 400 rodents, she boils them and removes their fur. Not far from Mashakwari, other women and children process more than 1,500 rodents.

Then she starts frying. The pleasant aroma of sizzling, seasoned meat replaces that of raw blood and guts. Known as “mbeva” in the Shona language, the small rodent, which resembles a mouse, is a delicacy, says Florence Chijumana, one of the women. “It tastes better than any meat.”

That is especially true when grain harvests are plentiful, and people hunt mbeva for leisure, she says. Now, farmers are hunting it for survival.

Zimbabwe had higher than average rainfall last season, which led to population outbreaks of rodents that have decimated crops, creating severe food shortages. The crisis comes after years of drought depleted food stocks, according to a report released in August by the Famine Early Warning Systems Network, a United States Agency for International Development research group. On top of this, lockdowns and closures of international borders during the coronavirus pandemic have hindered the transportation of food. 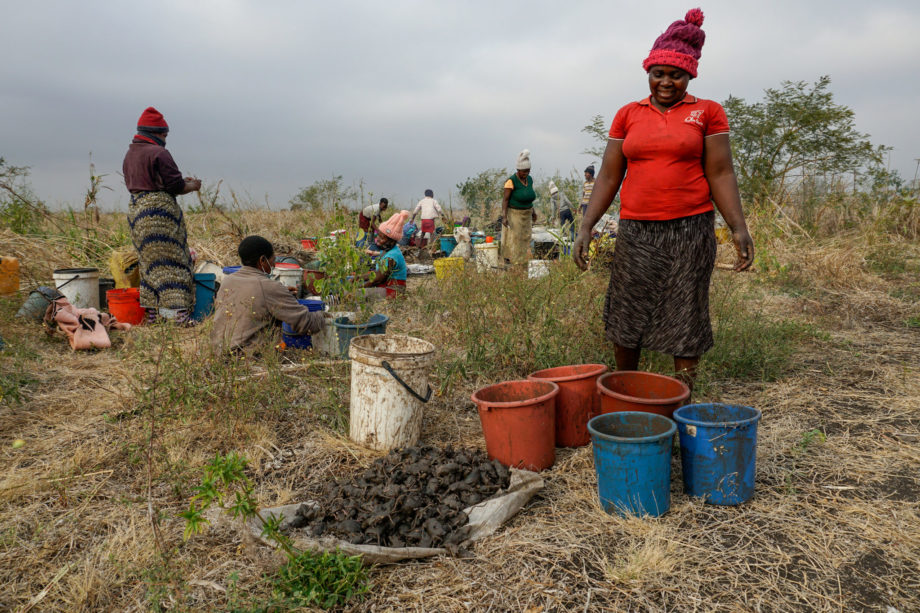 Remeredzai Mashakwari gets ready to clean and prepare the rodents she caught before selling them to travelers.

Drought in southeast Zimbabwe, where the village of Chisumbanje is located, lasted from late 2018 to early 2020, according to the U.S. National Oceanic and Atmospheric Administration’s Climate Prediction Center. Rainfall spiked dramatically in mid-2021, reaching a 10-year record high in October.

The rains are what drew the rodents, which can cause total devastation to food crops, says Shingirayi Nyamutukwa, who heads the Plant Protection Research Institute, an arm of the Ministry of Lands, Agriculture, Fisheries, Water and Rural Resettlement. Nyamutukwa says rodent outbreaks are common in agriculture, attacking a variety of crops in all stages of food production and storage.

There are nearly 400 species of rodents in Africa, but only 5% are crop pests, according to a 2017 study in Burleigh Dodds Science Publishing, a British agricultural science journal. Two species — the multimammate rat and the grass rat — are most responsible for population outbreaks in sub-Saharan Africa. Although they are small in size, they cause so much damage because they are prolific breeders. The young reach sexual maturity after 90 days, and females can conceive again as early as 24 hours after giving birth. 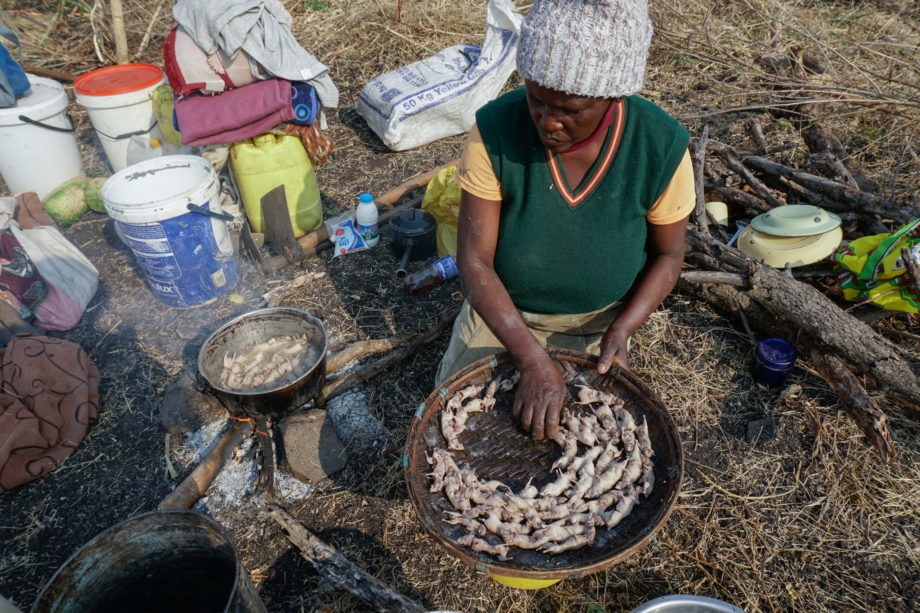 Susan Muticha fries her catch of mbeva in batches. After losing her crop to the rodents, trapping and selling mbeva has become her only means of providing for her grandchildren.

Globally, annual crop losses to rodents can range from 10% to 15%, according to a 2020 study published in Oecologia, a German journal of plant and animal ecology.  Consequences of rodent outbreaks are often less drastic in wealthy countries because they have significant food reserves. Governments of those countries also often help farmers fight threats to food production. In Australia, where a recent rodent outbreak devastated crops, the state government of New South Wales set aside 50 million Australian dollars to help farmers battle the plague.

In countries like Zimbabwe, whose governments neither help control rodents nor compensate farmers for crop losses, outbreaks can have serious impacts on food and economic security.

“If rodents are not controlled properly, they can cause 100% crop loss, not only in the fields, but also in storage,” says Nyamutukwa of the Plant Protection Research Institute. 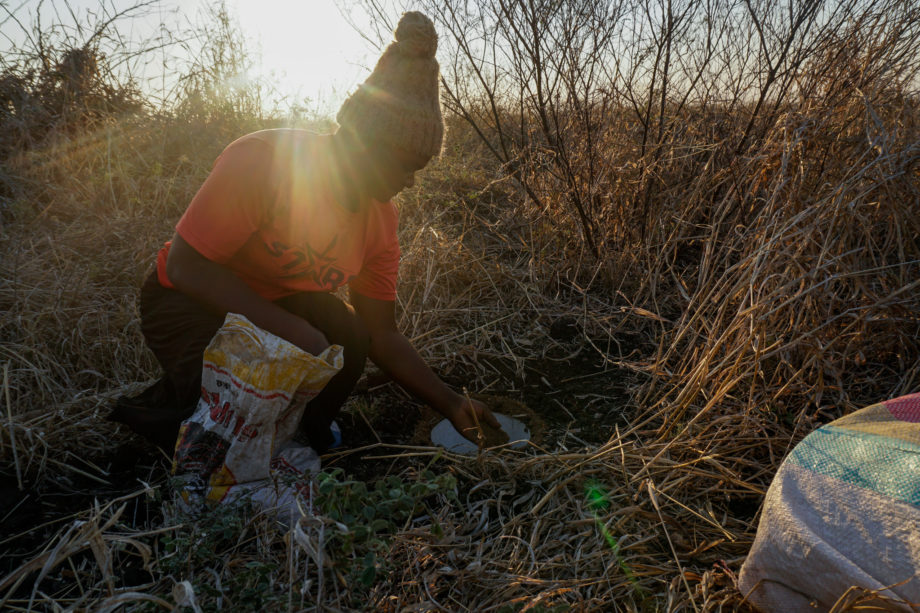 Florence Chijumana applies bait to a trap she set to catch mbeva. Rodents fall into the bucket in the ground and drown in water.

The food crisis has left farmers like Chijumana and Mashakwari with no alternative but to hunt rodents. “In the past years, I would harvest three full scotch carts of maize,” Chijumana says. “This year, I got nothing because of rodents, so we decided to capture them for food and cash.”

Mashakwari says she and other farmers go out to ravaged maize fields and stay for up to three nights at a time, setting traps with buckets of water to drown the rodents. They return home with hundreds of them, which can fetch around $50. They feed some to their families and sell the rest.

For a season spanning November to April, Mashakwari says she leased a hectare of farmland (about 2.5 acres) for $67. Without rodents, she would have harvested 5 tons of maize and earned about $1,500.

“This is all we have for now,” she says, pointing at a frying pan of sizzling creatures. “It’s better than no food at all. But when there are none left to catch, we’ll have to find something else to survive on.”