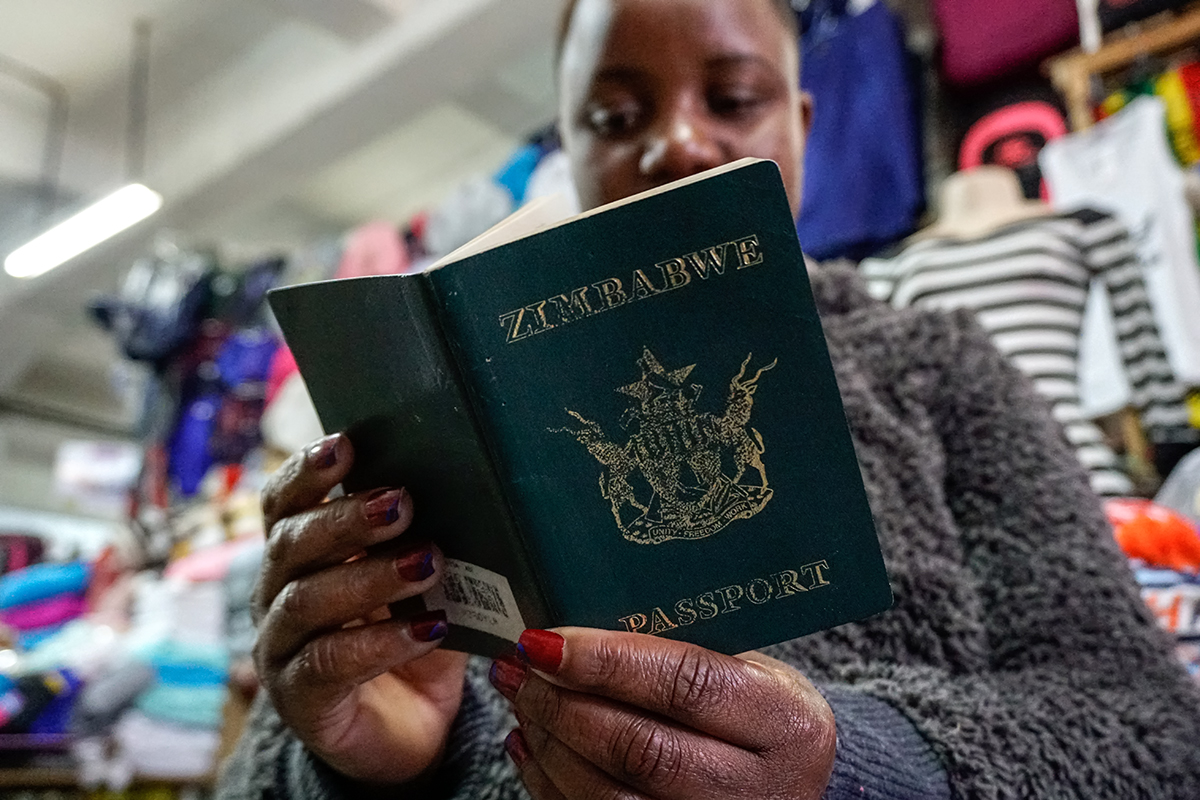 HARARE, ZIMBABWE — Mabel Chigume makes her living by crossing borders. She buys clothes from South Africa, Zambia, Botswana and Tanzania, and brings them back to sell in Zimbabwe.

But for months, Chigume hasn’t been able to travel to buy goods. She doesn’t have a valid passport.

Chigume says she first applied to renew her passport in June 2018. It expired that September, but she has not yet received a new travel document. Officials at the passport office in Harare told her the delay was due to a backlog of applications waiting to be processed.

Now, she has to rely on other cross-border traders who still have valid passports to buy goods for her while they’re in other countries, she says. But that has challenges of its own.

“Sometimes people do not bring your stuff. They just tell you that the goods were stolen or confiscated by the tax officials,” she says. She’s suspicious of these excuses, she says, because problems occur so often and it always seems to be her stock that’s affected by the seizures.

Chigume says the holdup has badly affected the only income source she’s been able to find in recent times.

“We are living in a harsh economy and most of us have to find employment on our own. Without passports, our informal employment is grossly disrupted,” she says.

In a country suffering severe economic hardship, passports and other identity documents have become a means of escape and survival.

Since 2000, declining conditions have pushed hundreds of thousands of people out of the country in search of a better life elsewhere. There is no reliable data for the exact number of Zimbabweans who have left in the past two decades, but the South African statistical authority estimated there were more than half a million Zimbabweans living in South Africa in 2016. Some who can’t permanently leave Zimbabwe have, like Chigume, created employment for themselves at home by relying on cross-border trading to make ends meet.

But the Zimbabwean government has not issued identity documents within usual waiting times since the beginning of the year, denying many the opportunity to find or maintain economic stability. Applicants are forced to wait for more than a year to get passports that would normally take six weeks to be issued.

In Zimbabwe, the law requires that everyone aged 16 and above must carry a valid identity document – either a passport, a national ID card or a driver’s license.

We are living in a harsh economy and most of us have to find employment on our own. Without passports, our informal employment is grossly disrupted.Mabel Chigume

National ID cards have also been affected by the backlog. When a GPJ reporter visited the passport office on July 1, officials there were taking up to 30 applicants per day. The rest were turned away.
Cecelia Ndlovu was at the passport office that day. She says she came to Harare from Gaborone, Botswana, where she has been living for ten years, to get a new passport.

“I have a Botswana work permit and my passport expires at the end of the year, so I have to get a new one as soon as possible,” she says.

But the last time she tried to apply, back in in May, Ndlovu says she was not even allowed to submit her application. She was turned away and told to come back on July 1. She had to return to Gaborone in the meantime and make the journey again when that date came.

“It’s costly and worrisome because I don’t know if I’m going to get a new passport before the one I have expires,” she says.

Ndlovu was able to submit her application on July 1. She does not know when the passport will be issued, she says, but she will check back in August.

Section 35 of Zimbabwe’s constitution states that all citizens are entitled to passports, birth certificates and other identity documents.

Kumbirai Mafunda of the Zimbabwe Lawyers for Human Rights (ZLHR) says the current processing delay could be a violation of that right.

“ZLHR is gravely concerned by the failure by citizens to obtain traveling documents,” Mafunda says. “ZLHR calls upon government to ensure that these rights are fulfilled.”

In a statement to the press on July 4, the Minister of Home Affairs and Cultural Heritage, Cain Mathema, attributed the backlog to a shortage of paper. The scarcity of foreign currency in the country had left the government in debt to suppliers, he said, adding that the department had set up a payment plan to clear the debt.

Neither Mathema nor the Registrar-General, Clement Masango, responded to inquiries from Global Press Journal.

As the registry attempts to clear its backlog, Zimbabweans in need of new passports are left wondering whether they’ll be able to travel again, and some are looking for alternatives.

Memory Magufa’s passport expired in 2015. She wanted a new one so she could visit her daughter in South Africa.

“My daughter is pregnant with her first child, so as per our customary tradition, I want to be there for her and assist her with taking care of the baby,” she told GPJ while waiting at the passport office on July 1.

Magufa first applied for the passport in May, but she was asked to come back and reapply on July 24. Her daughter’s baby was due on July 15.

Magufa says she could not wait for her passport to be ready. Instead, she was considering crossing the border illegally by bribing bus drivers and immigration officers – a process known as “border jumping.”