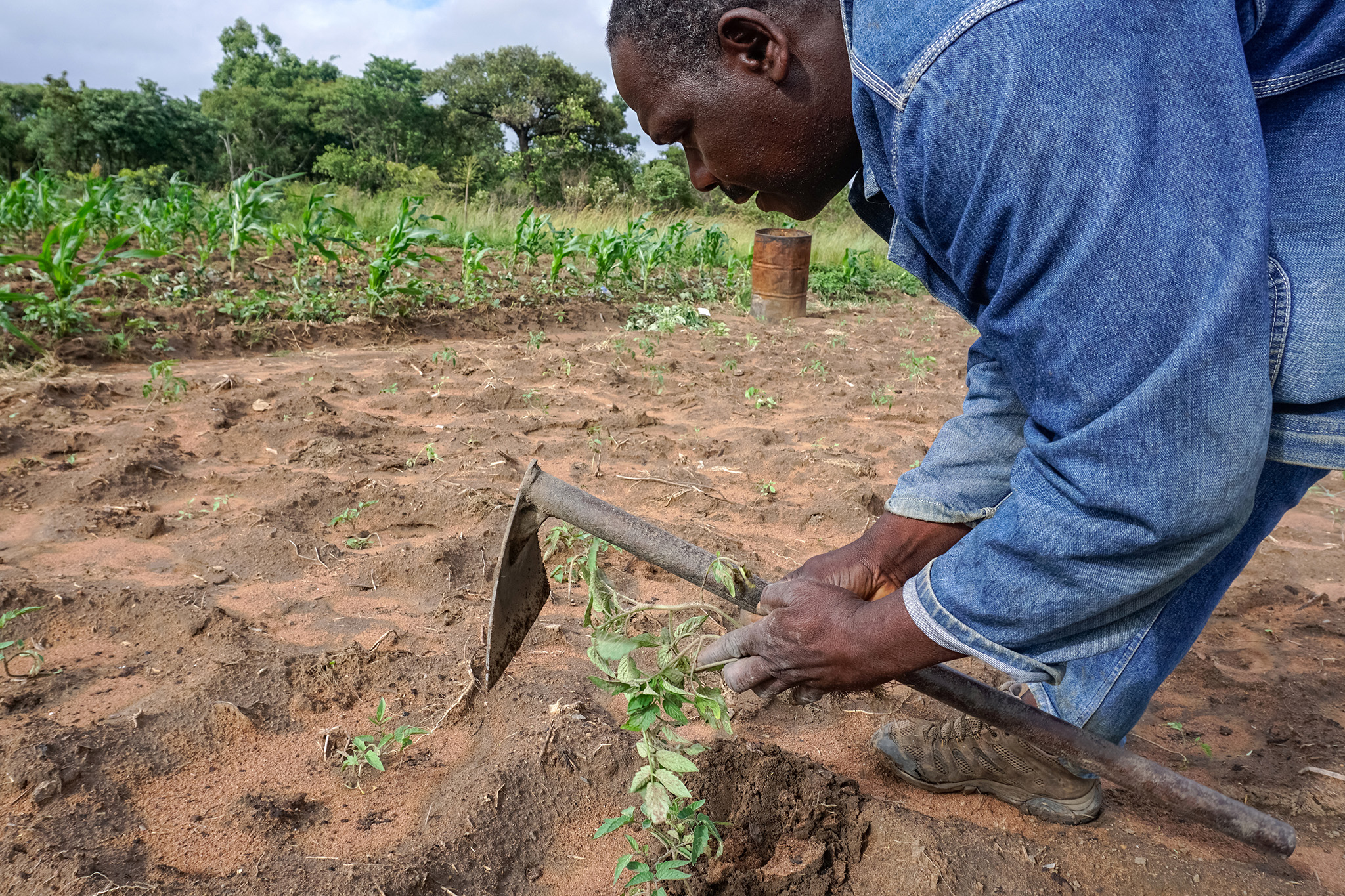 MASHONALAND WEST, ZIMBABWE — The smell of freshly plowed soil fills the air at a Kent Estates farm, about 50 kilometers (30 miles) from Harare, the capital city. Soft sounds of hoes piercing the soil echo from a distance. Farmers are at work.

Those farmers are Godfrey Gosa and his employees toiling on his holding of 85 hectares (about 210 acres). Gosa began farming in 2004 after he became a beneficiary of Zimbabwe’s fast-track land reform program.

But today Gosa uses only 10 of those hectares, where he grows maize, beans and leafy vegetables. The rest lie idle.

The land goes unused because Gosa’s farm was once a plantation of gum trees, and he doesn’t have the machinery to clear them. And he has lost faith in government efforts to help.

“I would spend weeks with nothing materializing because corruption dominated the program,” says Gosa, referring to Zimbabwe’s current setup to assist farmers, known as Command Agriculture. “I was really tired of that.”

In 2000, Zimbabwe announced fast-track land reform, created to take property from its white minority and return millions of hectares to its black majority. In this nation of farmers, it was a move that promised economic relief and power to black Zimbabweans, who at the time owned the country’s least valuable tracts and a fraction of the land overall.

Twenty years later, many farmers believe the promise of prosperity remains unfulfilled. Vast tracts of land lie fallow because growers don’t have equipment and “inputs,” such as seed and fertilizer. Frustrated farmers like Gosa say that, among other challenges, government efforts meant to provide them with these necessities have been crippled by corruption and inefficiencies, leaving them with unproductive fields. 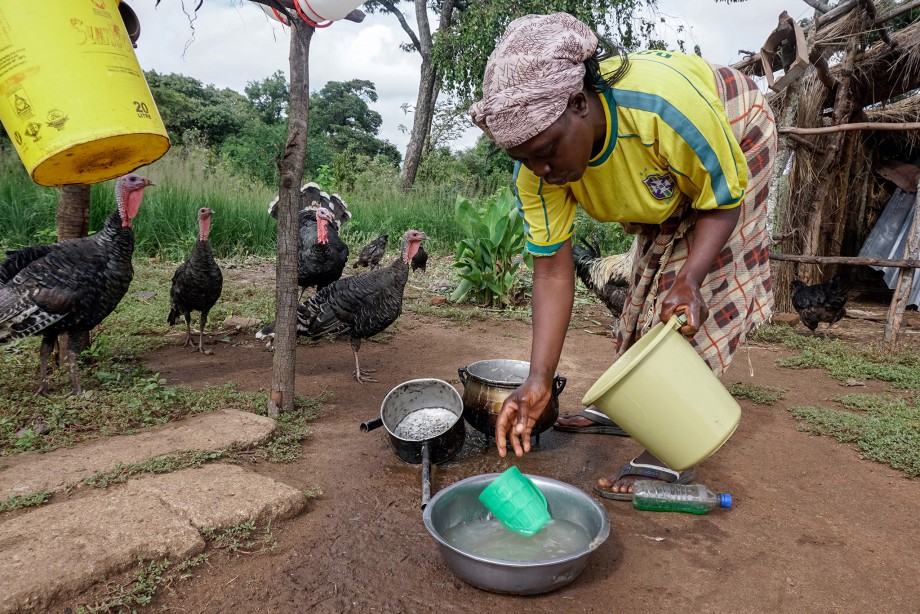 Juliet Chimimba washes dishes on her farm in Kent Estates, where she moved her family during Zimbabwe’s land reform initiative in the early 2000s. She says she uses only a fraction of her land because she lacks financing and machinery.

Farmers remain some of the few whose industries are not decimated by a government lockdown intended to prevent the spread of the coronavirus — at least not yet. “People still need to eat,” Gosa says. “In the long run, we foresee coronavirus affecting the economy as a whole and the agriculture sector will be affected too.”

Gosa isn’t the only one who sees farming as a necessity.

“Our economy is agriculture-based,” says Prince Kuipa, the chief economist of the Zimbabwe Farmers Union. “This means agriculture is at the center of everything. If the center is not holding, it means the fertilizer companies do not have buyers, the industry is waiting for raw materials from farmers, and many of them have closed — and, therefore, the economy dies.”

About two-thirds of Zimbabwe’s 14.8 million people work in agriculture. They use 41% of the country’s 39 million hectares (96 million acres).

After Zimbabwe’s independence in 1980, the new government made land reform a priority, but its efforts stalled. Two decades later, white Zimbabweans still owned most of the nation’s farms and estates. In the fast-track land reform that followed, the government redistributed state-owned lands and also acquired 10.8 million hectares (26.6 million acres) for reallocation.

"I would spend weeks with nothing materializing because corruption dominated the program. I was really tired of that."Godfrey Gosa, referring to a government program known as Command Agriculture

The program aimed to stabilize subsistence farmers and the landless, while positioning new black commercial farmers for economic success.

Yet over the next few years, financing for agriculture nosedived. In response, the government tried the Farm Mechanization Program in 2007, in which farmers received equipment and loans that many did not repay. Critics say corruption among both the political elite and farmers themselves led to its failure.

For example, some farmers got tractors from the government, Gosa says, but instead of using them for their fields, they resold them.

By 2010, the number of large commercial farms, owned mainly by whites, had plummeted by 72%.

Then in the 2016-17 farming season, the government tried to rescue the sector again with the current Command Agriculture program, designed to boost local food production and guarantee food security.

Farmers who signed up agreed to produce at least 1,000 metric tons of maize and commit 5 metric tons per hectare to repay loans that came in the form of equipment and inputs.

In this program, farmers picked up seed and fertilizer from provincial offices. At those pick-up points, some agriculture extension officers gave inputs only to farmers they knew and took bribes from others, according to parliamentary reports and Gosa. At times, disbursement of the inputs was delayed, and farmers received seed long after the planting season had passed.

Gosa, 58, a retired army man who is married with six children, says such inefficiencies and mismanagement have left growers underfunded. He can grow only his few crops, selling some to commercial farmers to resell. He says he produces just enough to survive. 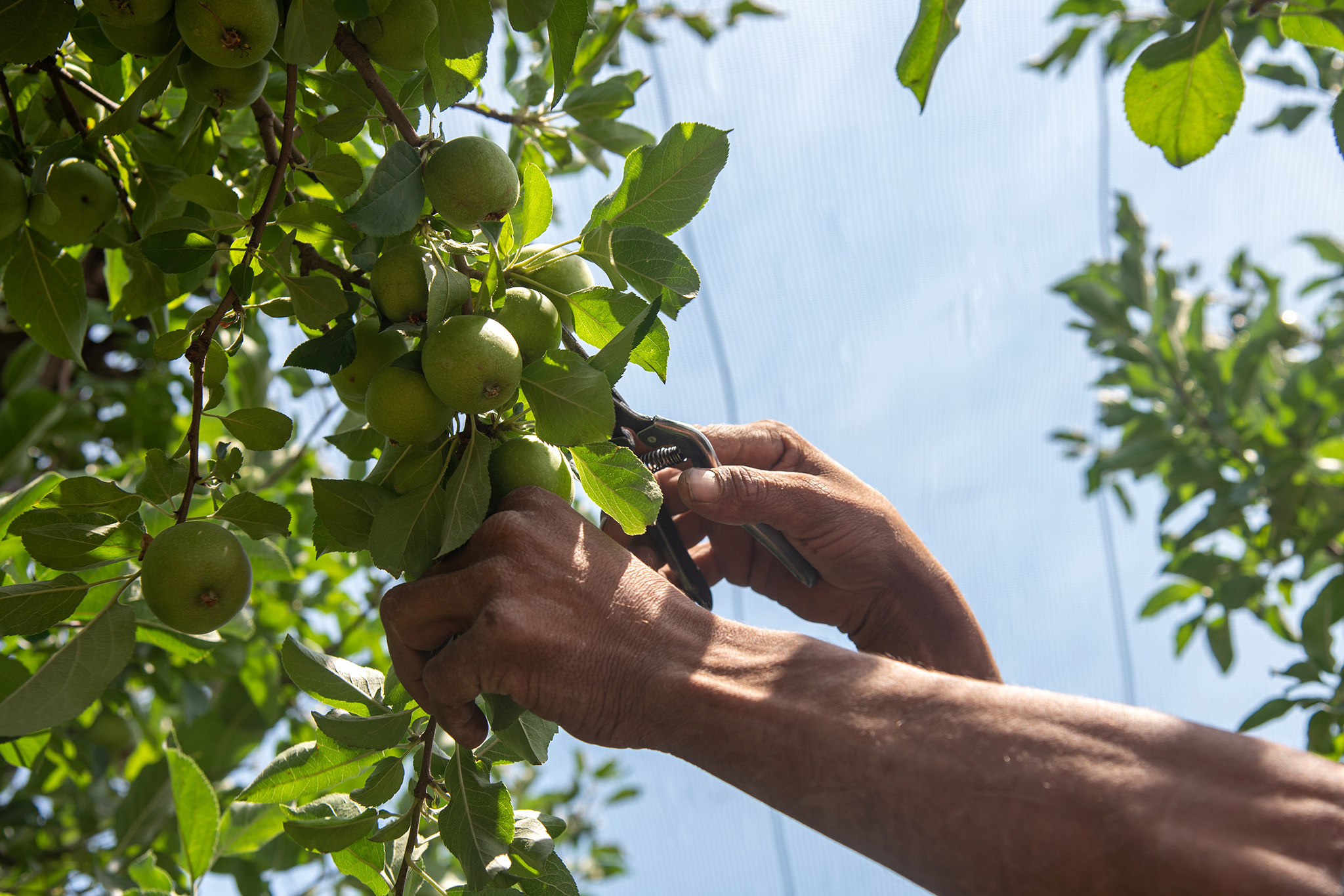 Witness the human impact of a changing climate.

“It’s a hand-to-mouth situation,” says Gosa, a tall, fit man with hands muddy from planting. “I can’t save for anything.”

Juliet Chimimba, 46, came to Kent Estates in 2004 with her four children, after being allocated land through the fast-track program. She grows tobacco, sugar beans and maize. She has 128 hectares (about 316 acres), but farms only about 4% of the land.

“We don’t have capital, so we are struggling,” she says. “We have maize ready for fertilizer, but we don’t have the money, so we will just make do without. We want to farm at a large scale, but we can’t even utilize the land.”

Kuipa, the economist, says the problem of underused land is complex. He notes that when fast-track land reform occurred, redistributed farms often came with houses, dams and tractors. But he says land invasions resulted in theft and vandalism, leaving many farms barren.

Farmers are bedevilled by an array of challenges, including overdependence on the government, unreliable electricity and a lack of irrigation capacity, says Ben Gilpin, director of the Commercial Farmers Union of Zimbabwe.

Last September, in time for the 2019-20 planting season, the government announced a new loan initiative for farmers in a retooling of Command Agriculture. Neither Kuipa nor Gilpin is confident that it will work.

In the initiative, the government backs bank loans to farmers for inputs, which growers may purchase from private suppliers. Kuipa says it seems good for farmers and for banks — but risky for a government already wobbling under Zimbabwe’s economic woes.

In the meantime, farmers Gosa and Chimimba both say past disappointments have left them leery of the new initiative. They say they do not plan to participate.