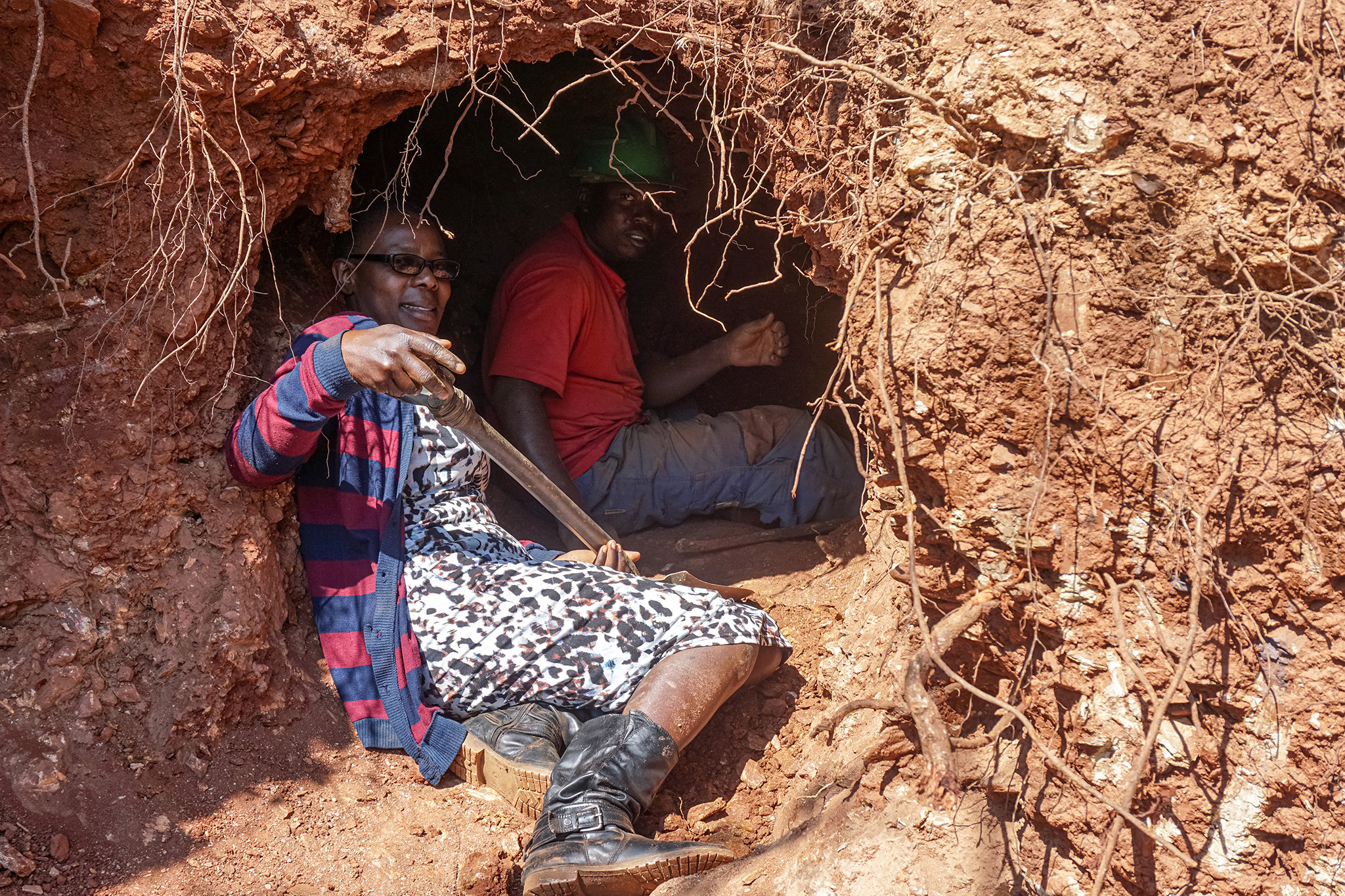 PENHALONGA, ZIMBABWE – Every morning, Dorcas Ganda wakes up by 6 a.m. and begins a 3-kilometer (almost 2-mile) hike up Chinyanjera Mountain. She and her husband own a plot of land there where workers mine for gold.

Ganda actively worked in the mine alongside her husband beginning in 2015. But when her diabetes symptoms worsened in 2018, that heavy physical labor ended. These days, she only visits to monitor her male employees, who made it clear they resented taking orders from a woman. When threatened with losing their jobs, they backed down. But Ganda says she still felt unwelcome.

“They said I was not allowed to visit the mine because they believe in the customary superstition that the gold will disappear because I am a woman, and women have bad luck when they are on menstruation,” Ganda says.

Wellington Takavarasha, the CEO of the Zimbabwe Miners Federation, says 360,000 of the 1.5 million Zimbabweans involved in the mining industry are women. But in regions like Manicaland, the eastern province where Ganda’s gold mine plot is located, a woman who is menstruating is considered to be unclean and unlucky. Because it is difficult to determine when women are menstruating, they are sometimes banned outright, or relegated to cooking and selling food to male miners.

Artisanal and small-scale mining around the world is a profitable industry, according to an April 2018 report commissioned by the Intergovernmental Forum on Mining, Minerals and Sustainable Development (IGF). An estimated 40.5 million people worldwide were directly involved in small scale mining in 2017 – and nearly 150 million people indirectly depend on it, the IGF study found. 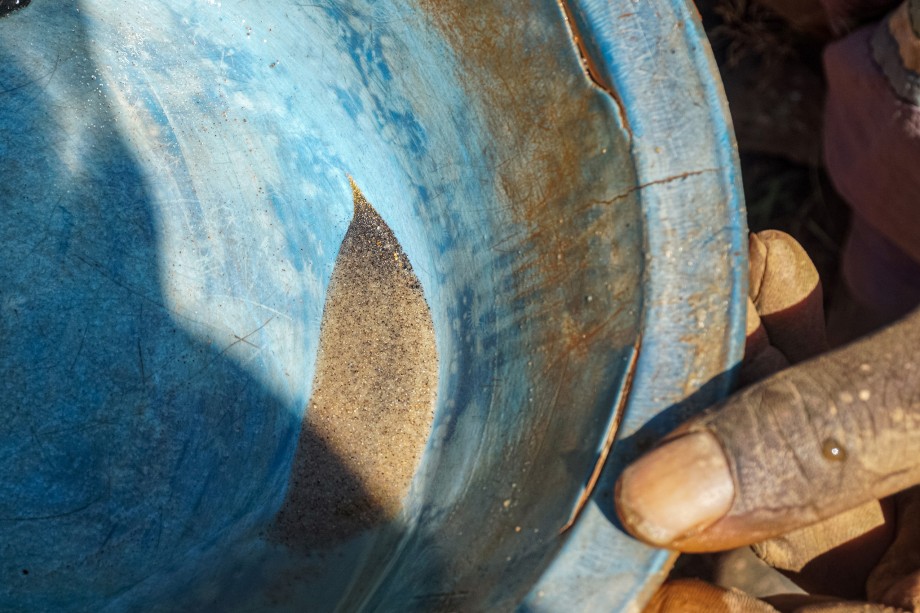 A miner’s weathered pan yields a few granules of gold dust in a Penhalonga, Zimbabwe gold mine.

The United Nations Economic Commission for Africa estimates that women account for up to 30% of the artisanal and small-scale mining workforce globally, and up to 50% in Africa.

In 2016, researchers with the Zimbabwe Economic Policy Analysis and Research Unit visited mining sites in the Mutare-Odzi district of Manicaland and counted a total of 787 workers, only 17 of which were women. Just one of the 43 mining sites visited was owned by a woman, and of the 34 managers appointed at different mining sites, only two were female.

Ganda says she has met many women who have been chased away from mines, or discouraged from even trying to enter the profession. She says she makes time to attend their informal gatherings to offer support and encouragement. She also organized a meeting with her employees to talk openly about the menstruation myth, and says it has helped ease objections to her presence.

“There are many times when I was not feeling well and not going to the mine that my employees would not find any mineral belt and would only strike gold on my return. Most now believe it is just a traditional belief that cannot be proven,” says Ganda, who even ventures 45 to 60 meters (148 to 197 feet) down the mine to monitor progress. But her success is not enough to change deep cultural beliefs.

Joseph Ngorima, the chairperson for Zimbabwe National Traditional Healers Association (ZINATHA) in Manicaland, says some people look for lucky charms to increase their gold deliveries or easily find it during their mining ventures. They believe that a menstruating woman cancels out the power of those lucky charms.

Victor Saunyama , a village leader who is locally known as Chief Saunyama, is from the Nyanga district of Manicaland, where artisanal mining is very popular. “Gold is often associated with tradition, and there are some traditional rituals done where gold is discovered. As a result, no woman should come to the mining area at all as it is difficult to prove whether one is menstruating or not,” Saunyama says.

Also, in some parts of Africa, there is a long-held belief in water spirits such as mermaids, even in a landlocked country like Zimbabwe. Those beliefs are thought to have found their way to Zimbabwe in the 19th century via west African traders who believed in Mami Wata, a mermaid-like deity whose name means “mother of water.”

In Manicaland, some believe a mermaid sighting brings good luck – but not for everyone. Nelson Maturura, an artisanal miner in Penhalonga, says some male miners believe there are seemingly jealous mermaid spirits who want to give gold only to men. “So when a woman comes to the gold claim, the mermaid withholds the gold from them. This is a widely believed myth which explains why some do rituals to appease or make an offering the mermaid spirits,” says Maturura.

Even experienced women leaders in the mining industry are not immune to traditional beliefs.

The Manicaland representative for the Women in Mining organization, Joslyne Tsitsi Musiyazviriyo, says she has faced serious challenges from men who believed in the myths. She says that though she defied them, they found a way to block her participation.

“The male miners would at times strip and start mining half-naked of which as a woman and a mother, I would be left with no choice but to leave,” says Musiyazviriyo, who has been involved in mining for over 15 years. Her husband is also a gold miner and supports her when she works alone and when they’re digging side by side. Their mining careers helped them raise four children and send them all to school. 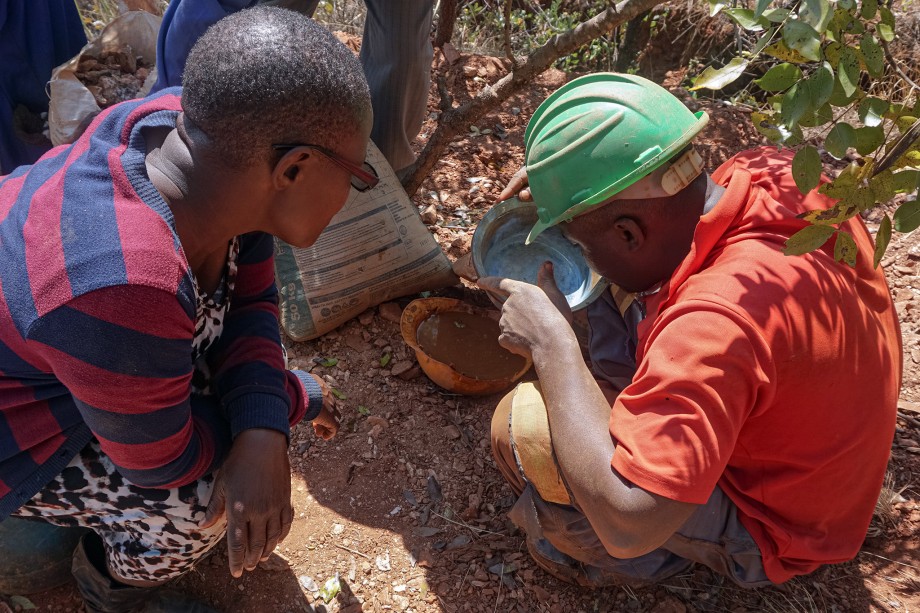 Dorcas Ganda confers with a worker in the Manicaland district gold mine she owns with her husband in Penhalonga, Zimbabwe. Male miners used to think menstruating women brought bad luck.

Musiyazviriyo says that men sometimes even use these myths as a way to steal profits from their female co-workers. “In my case, I feel male miners I would be working with are just greedy, because end of day, whatever we get we share fifty-fifty. So if I am not around, most of the time they can steal and get more for themselves.” Sometimes, Musiyazviriyo says, her husband has to check on the progress of claims that she owns to make sure she is not cheated.

For some women, the constant fight against traditional beliefs is simply not worth the effort.

Tsverukai Duwa says she has stopped working the mines at Premiere Estate farm and at the DTZ-OZGEO diamond base in Penhalonga because of strong resistance from male miners. Trying to reason with them only led to long, drawn-out arguments.

“There are some women who have successfully ventured into mining just like some men, regardless of these traditions,” Duwa says. “We have also proven to be capable miners over the years, but first the barriers of entry have to be broken, especially those based on superstition.”