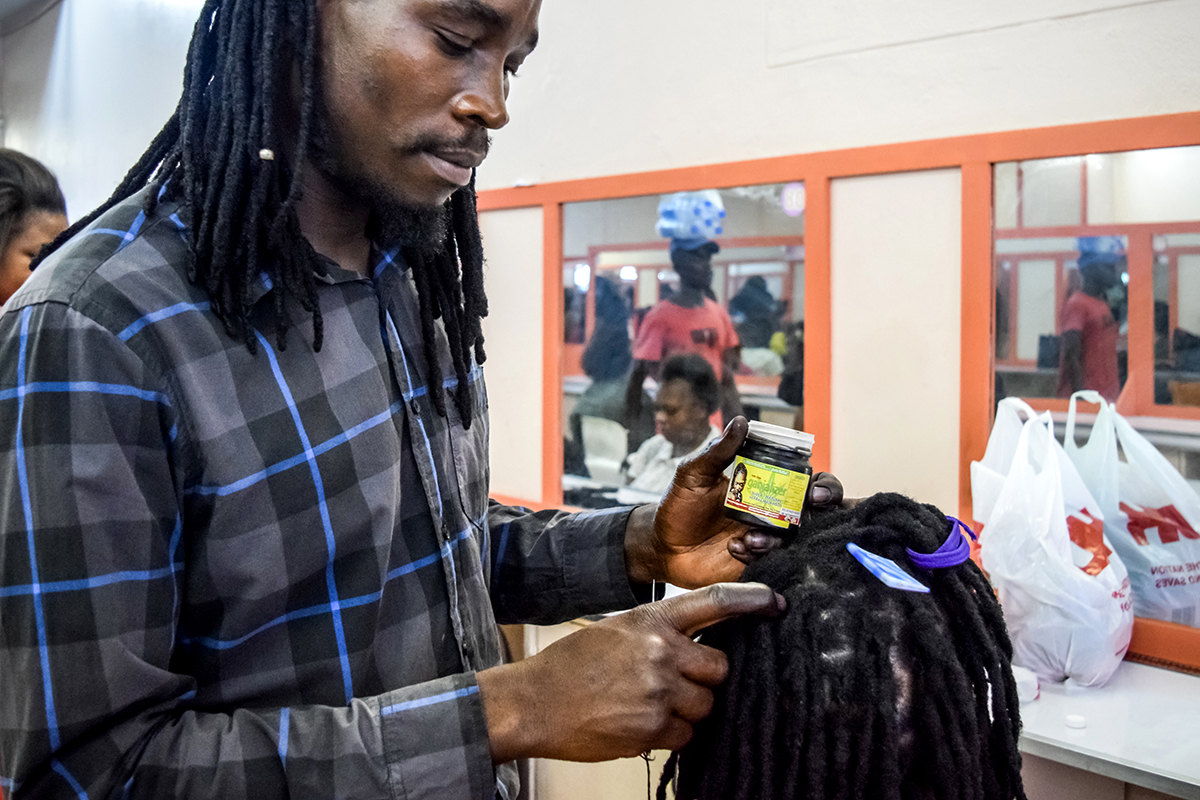 HARARE, ZIMBABWE – Chatter fills a spacious, well-lit room. On the walls, large mirrors face seated women, young and old. As they talk and laugh, stylists wash, comb, treat and style hair. Every hour or so, women shuffle out of the room neatly coiffed, and a new batch comes in.

By the door, a woman greets the newcomers with a container of hair pomade labeled Ganjalizer.

Mai Chichi opens the container, revealing a thick, oily mixture with dark-brown specks of ground hemp seeds. The product is a hit with customers at this hair salon in the central business district, where Mai Chichi has been selling cosmetics and hair products for years.

She says she uses the pomade, too.

“It helps with hair growth, and it’s important to me as a woman to have strong, healthy long hair,” she says.

Hemp-infused hair pomades are increasingly popular among Zimbabweans. Customers say it makes their hair grow quickly. But selling Ganjalizer is risky, says Mai Chichi, who asked to be referred to by her nickname for fear of arrest.

The broad nature of the law is the source of much confusion for manufacturers, sellers and users alike. Authorities say the hemp-infused hair products are illegal. But some manufacturers, even those who have been arrested previously, declined anonymity for this article, saying they are confident that their product is legal, effective and popular.

Hemp seeds are the seeds of the cannabis plant. This part of the plant is typically used in personal-care products such as oils, soaps, lotions and shampoos. In some countries, including the U.S., such products are legal, because they are not ingestible and because they contain sterilized hemp seeds. 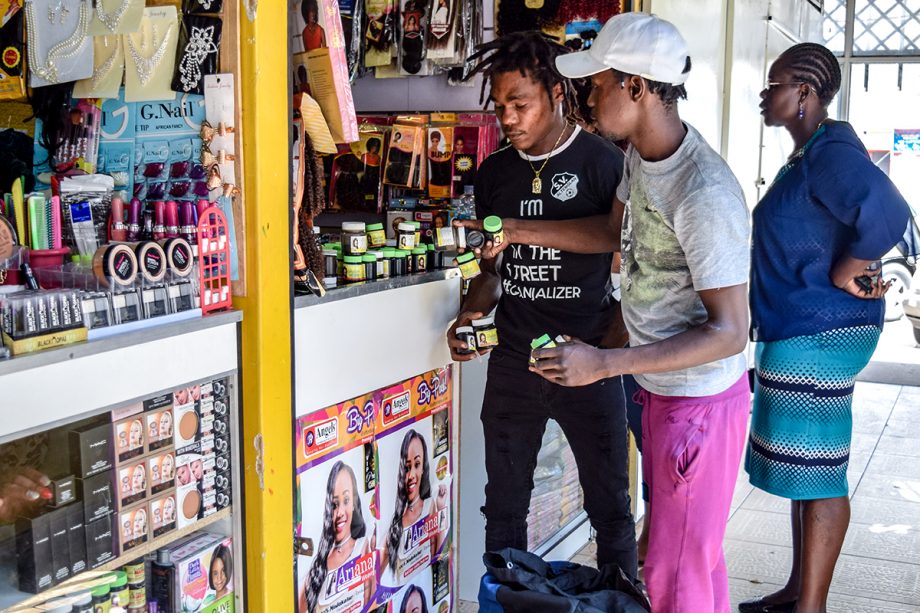 Taurai Chemhere (left), one of the founders of Ganjalizer, and Collen Hega, his employee, count bottles of their product, which they are selling to a cosmetic-shop owner in the central business district of Harare, Zimbabwe.

In Zimbabwe, however, the possession and distribution of any portion of the plant, sterilized or not, is illegal. Additionally, the seeds must not be crushed, and the oil obtained from these seeds is also illegal, according to the Dangerous Drugs Act. Anyone who breaks the law can be sentenced to 10 years in prison. In neighboring Zambia and Kenya, cannabis cultivation and possession are also punishable by law. Despite the legal repercussions, cannabis is the most commonly used drug in Zimbabwe, and it is grown locally.

While medical experts in other countries have recommended hemp seeds in remedies for medical conditions such as heart disease and indigestion, Kudzai Doma, a Harare-based pharmacist, says they are also helpful for hair growth because they contain omega-3 and omega-6 fatty acids. Hair strands do not break easily when they absorb these fatty acids, Doma says.

Ganjalizer, the hemp-infused hair pomade, is the brainchild of Taurai Chemhere, Percy Rusambwa and Elton Hlambela, all of whom declined anonymity for this article because they say their product is not illegal. Five years ago, the trio mixed together various ingredients, including ground hemp seeds, to create what has become a best-selling hair pomade.

After graduating high school, they were unable to find jobs in Zimbabwe’s chaotic economy, which has been in freefall for years. They decided to sell the product that they had invented to strengthen their own dreadlocks.

Unemployment is rife in Zimbabwe. While rates remain unknown due to a lack of reliable and current data, some experts have put unemployment in the cash-strapped country at 9.3 percent, which exceeds the sub-Saharan Africa average of 7.5 percent.

Despite cash shortages and the questionable legality of his product, Chemhere says sales have been steady. Ganjalizer is stocked at several hair salons and beauty supply stores in Harare and outside the country, too.

About 1,500 bottles are sent weekly to Botswana, where Ganjalizer is also sold in beauty-supply stores, Chemhere says. The wholesale price for a 100-milliliter (3.4-ounce) bottle is 50 cents.

Chemhere, Rusambwa and Hlambela have hired four people to help with the production and distribution of their product. The employees each sell about 100 bottles per day.

But last year, sales came to a temporary halt when Chemhere, one of the founders, was arrested after one of his employees was caught with the product.

The Harare-based Zimbabwe Republic Police monitors the cultivation and distribution of cannabis by targeting suppliers and their customers. They often conduct inspections at roadblocks in the city, which is where the hair product was confiscated.

Paul Nyathi, a police spokesman, says it is unlawful to use the cannabis plant in any capacity.

The police tested the Ganjalizer, hoping to implicate Chemhere and his team, but Chemhere says, the traces of hemp went undetected, likely concealed by the other ingredients used.

Despite the benefits of the product, some Zimbabweans say they prefer not to use hemp-infused hair products because of the potential legal repercussions and other reasons.

“That stuff smells! I can’t go about my business of the day smelling of weed,” says Tariro Mandunya, who also questions its legality.

But Mai Chichi and the Ganjalizer founders say there are many people willing to buy hemp-infused products because of local beauty standards.

“At home, your husband can give you money for groceries [meat and staple foods], and you can decide to sacrifice and eat vegetables while you use the money for a new hairdo. That’s how much great hair is important to us,” Mai Chichi says.