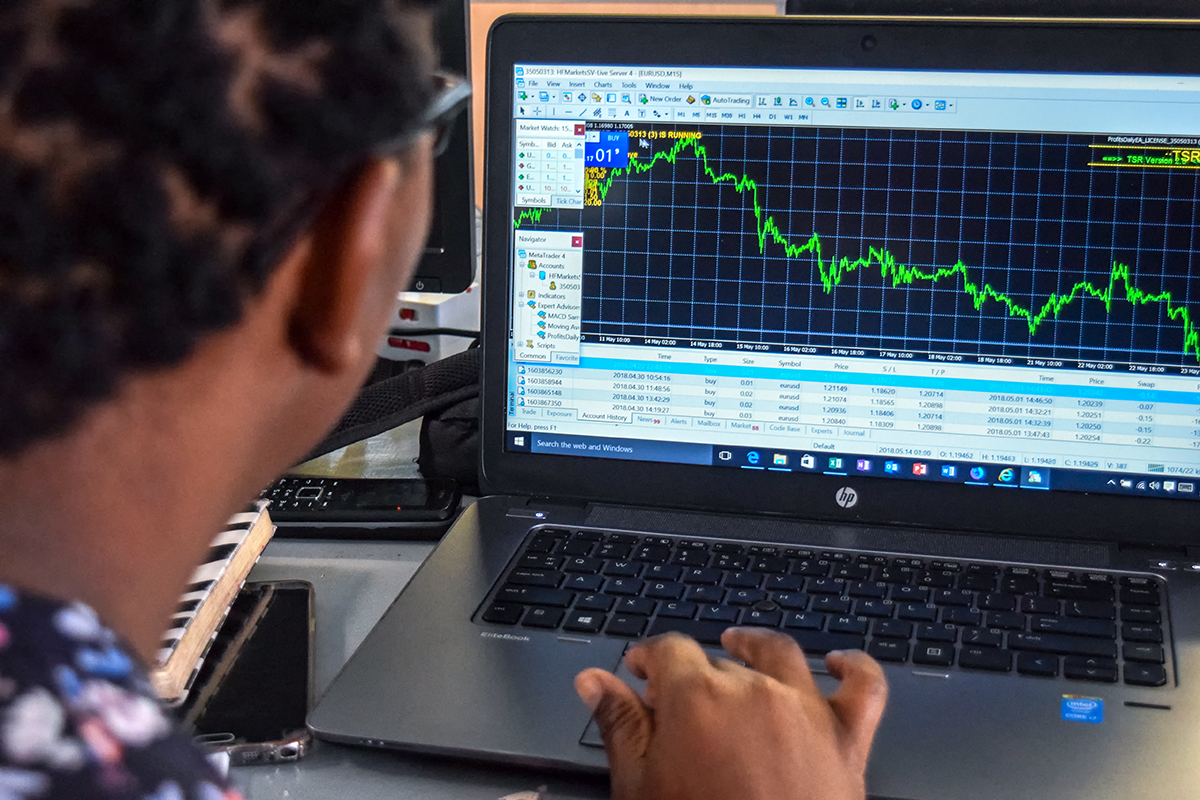 HARARE, ZIMBABWE — Staring at her computer screen, Vongai Muchabaiwa traces the line on a graph with her finger. She’s been at it for hours, patiently waiting for the right moment to make a trade.

In 2016, the convenience-store owner decided to start online foreign-exchange trading, hoping to earn some extra money. It took Muchabaiwa three months to master forex trading on her own, but she says it’s paid off.

On average, the 32-year-old makes $200 a week – just enough to supplement her income and help her survive in cash-strapped Zimbabwe, she says.

“My life changed in a big way,” she says.

Online forex trading is becoming increasingly popular among Zimbabwe’s urban youth, a group for whom unemployment is high. While some say the money made from online trades helps them afford basic necessities and set up small businesses, others say they are left with nothing.

Financial systems across sub-Saharan Africa are constantly evolving, with significant developments such as mobile banking, according to the International Monetary Fund. But in Zimbabwe, economic growth has been slow; some experts blame years of political instability.

Hyperinflation in the years prior to 2009 led to the use of multiple currencies in the southern African country. In 2016, bond notes were added to Zimbabwe’s list of legal tenders. Despite the government’s efforts to improve the financial system, cash is hard to come by.

My life changed in a big way.Vongai Muchabaiwa, an online foreign-exchange trader who makes $200 a week on average

Jobs are just as hard to find, especially for recent graduates. According to Zimbabwe’s Constitution, anyone between the ages of 15 and 35 is considered a youth. Informal jobs are common among this group. Formal-sector unemployment in Zimbabwe reached 94 percent in 2008, and the youth made up 67.7 percent of this total, according to the National Association of Non-Governmental Organisations.

With few job opportunities, some young people have turned to the forex market. With an average daily trading volume of more than $5 trillion, the decentralized forex market is the most liquid market in the world. Within the market, people trade pairs of currencies, betting on the value of one currency against the other.

Tawanda Nyagwaya, founder of Forex Trading School Zimbabwe, teaches students, entrepreneurs and others about best practices for online forex trading. Since the school opened in 2014, the number of young trainees has grown, he says.

“We conduct eight sessions of training, with each session being an hour and half long, and after that a person can be able to trade on their own,” he says. “I have trained unemployed graduates who are now making money for themselves through trading.”

Muchabaiwa, a self-taught forex trader, says she spends a lot of time monitoring the currency market to avoid losses.

“Besides the money factor, I have learned how to manage risks,” she says of the few times she’s made less money than the amount she put up for trade. Muchabaiwa has access to the money she makes from trades in various foreign currencies, including the U.S. dollar, which is an official currency in Zimbabwe. With a MasterCard card issued by HotForex, the online broker she uses for trading, she is also able to withdraw her earnings in other countries.

Thomas Muyambo also trades online. Unlike Muchabaiwa, the 31-year-old was nervous about trying his luck with forex trading.

“I thought forex trading was the same as the pyramid schemes that later collapse after people put in their money, but I later joined in after my friend convinced me that it was genuine,” he explains. Muyambo has come to enjoy online forex trading but fears that it is not sustainable.

Both Muyambo and Muchabaiwa have lost money in the process.

“I started with $20, and my account grew to $60, but I lost all the money after my trades went in the wrong way,” Muyambo says.

“It is a lucrative business if managed so well, but it is gambling to young people who are engaging in it as a way to make quick money – and at the end of the day, many lose out,” he says.

But Muchabaiwa says she’ll continue to take risks in trading because she may win big in the future.