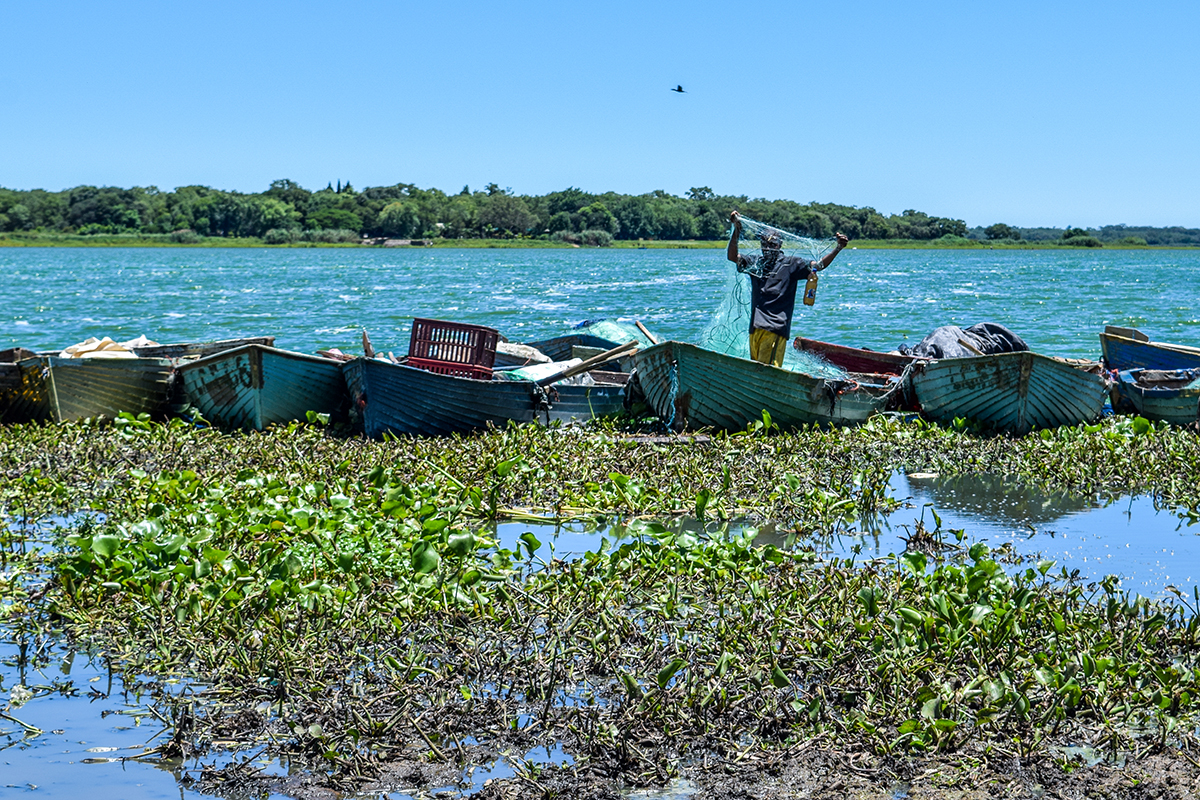 LAKE CHIVERO, ZIMBABWE — The air is filled with the smell of fish as Fungai Kayemba untangles a stray piece of string hanging from the worn-out, twine net he used for the morning’s fresh catch. After being used for multiple catches for two days, this non-biodegradable net is already unusable.

A fisherman caught using a net such as this can receive a $20 fine or imprisonment, Kayemba says, as he burns the net in a ditch he dug a few steps away from Lake Chivero’s banks.

“These nets can be tangled up in weeds and be lost in the water; fish can end up tangled in the nets, die and rot in the water, emitting bacteria that can cause the deaths of other living fish and organisms in the water,” says Kayemba, a member of Tiger Bay Fishing Cooperative, a registered fishery that conducts most of its activities at Lake Chivero.

Kayemba agreed to speak on the record despite acknowledging that his nets were illegal. The practice is widespread, he says, and he wants to bring awareness to a growing issue: limited access to biodegradable nets in Zimbabwe.

Kayemba says he has no other choice but to fish with twine nets, which are widely available in Zimbabwe and cost-effective for business. Burning the net after use, instead of disposing of it in the lake, like some fishermen do, saves what is left of the lake’s fish, he adds. 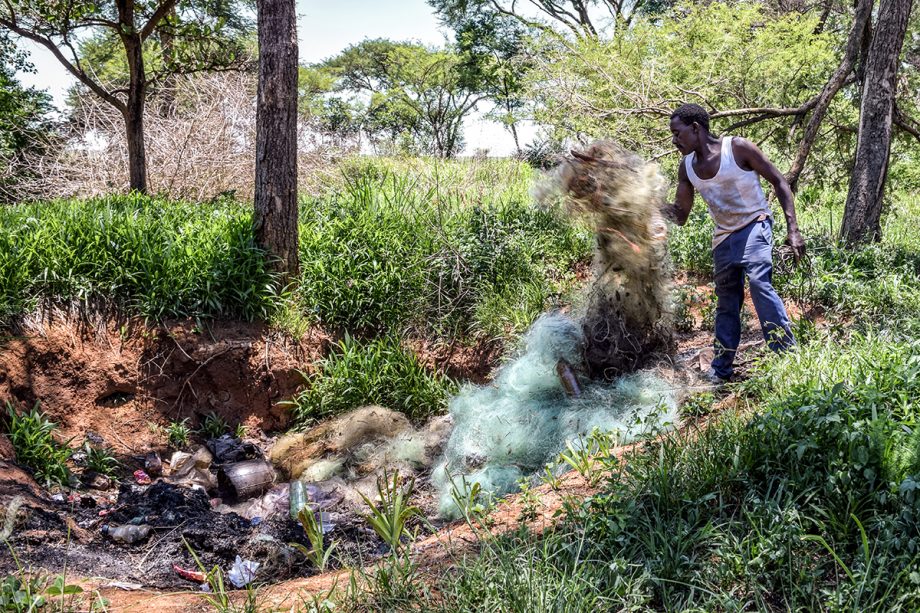 Fungai Kayemba throws a worn-out twine net into a ditch before burning it, to avoid leaving it in the lake after use. Local authorities and experts say twine nets left in Lake Chivero can harm fish.

The local environmental-conservation authority says the use of non-biodegradable nets, made from what’s known as monofilament fishing line – a single strand of synthetic material – is illegal and harmful to species in Lake Chivero. However, the use of these nets is very common among fishing cooperatives. They say biodegradable nets are hard to find and catch fewer fish.

Lake Chivero, located southwest of Harare, Zimbabwe’s capital, contains about 250 billion liters of water and is a primary source of water for the city. The lake, surrounded by a park and hotels, is also used for boating and other recreational activities. Many people – both those who work in large, registered fishing cooperatives and unregistered individual fishermen – rely on the lake for their livelihood.

In 2014, some 47,700 Zimbabweans were employed in fisheries and aquaculture, according to the Food and Agriculture Organization of the United Nations.

To get a permit to fish commercially here or in any body of water in Zimbabwe, one must first register with the Zimbabwe Parks and Wildlife Management Authority (Zimparks), a government agency that manages and protects natural resources and wildlife, including those located in recreational parks and around national lakes, dams and other bodies of water. Fishing cooperatives also must register with the Ministry of Small & Medium Enterprises and Cooperative Development.

If fishing as an individual, registration with Zimparks is the only requirement for a fishing permit.

Both registered individuals and companies are required to use biodegradable nets, says Tinashe Farawo, spokesman for Zimparks. Despite this requirement, some continue to fish without a permit or to use twine nets. On average, four people per month are arrested for fishing without a permit at Lake Chivero, Farawo says.

Members of the local authority say they require the use of biodegradable nets among registered fishing cooperatives and among fishermen to protect species in the lake, though the authority does not provide access to the fishing nets. Improper use of or disposal of non-biodegradable fishing nets can kill marine species that get entangled in the nets or accidentally ingest the twine.

Even biodegradable nets pose a risk to life in the lake, experts say, because they can take two years or longer to decompose in saltwater conditions. 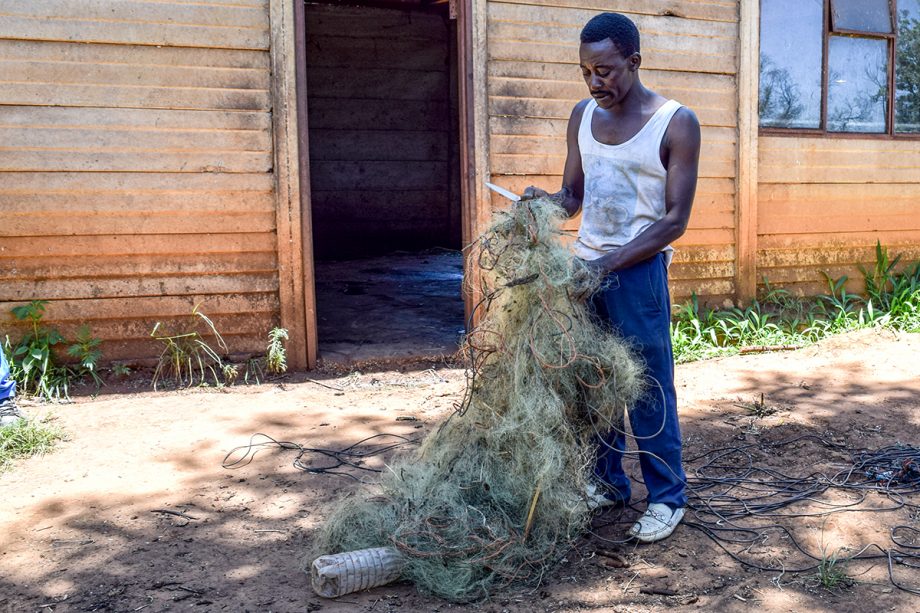 Fungai Kayemba untangles his twine net near Lake Chivero. He has been using twine nets for fishing for 16 years.

Kayemba says many fishermen use twine nets because they are cheap. A net 100 meters (328 feet) long goes for $22 at fishing-gear shops in Harare, he says. Others make their own twine nets for even less money by using plastic, he says.

Biodegradable nets, however, are hard to find, Kayemba says. When he started fishing 16 years ago, he used biodegradable nets for about three months but often struggled to find them in fishing shops in and outside the capital. Kayemba says biodegradable nets are rare, because they are not manufactured in Zimbabwe. Those nets also prevented him from catching as much fish as he did with twine nets.

For Ganizani Katunga, a member of a local fishing cooperative who has been fishing at Lake Chivero for eight years, using a twine net means that he can catch a lot more fish than he’d be able to catch with other nets, including those made of wool, a non-biodegradable net that some prefer.

Katunga says he has never used a biodegradable net because, like many others, he does not know where to find one.

“We buy nets on our own and the National Parks [Zimparks] does not provide them,” he says.

Though Katunga does not use a biodegradable net, he says the size of holes in his twine net comply with other Zimparks requirements. Each hole must measure 3.5 inches, he says. This prevents many from catching kapenta, a local small fish that can slip through the net holes, Katunga says.

Authorities say small fish such as kapenta are often found in the lake’s breeding zones, where fishing is prohibited. Fishing in these zones disrupts the process of breeding certain types of fish, Farawo says.

But some registered fishing cooperatives still fish in areas where kapenta is bred, says Lydia Dowororwa, who has been buying the local fish from fishing cooperatives here for seven years. Dowororwa says she sells the kapenta in Norton, a town near Lake Chivero. It is popular among Zimbabweans because it is cheap and can feed large families, she says.

But local authorities say registered fishing cooperatives and individuals must comply with the agency’s guidelines, regardless of what it means for business, in order to avoid endangering the lake’s fish.

Farawo says a patrol team of at least three people often monitor fishing activities at the lake to ensure that each person is registered and is using equipment with the required specifications.

“We have people who are resident at the fisheries,” he says. “If people are not working in line with the permit, they are arrested, and we confiscate the [fish].” 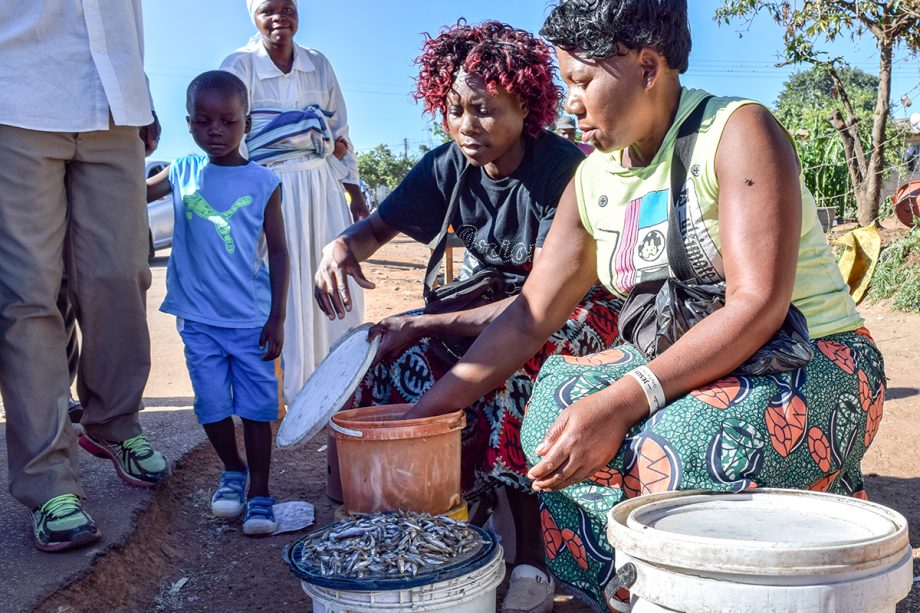 Lydia Dowororwa (center) and Nyarai Chikuna (right) sell a local fish called kapenta by the roadside in Norton, Zimbabwe. Dowororwa and Chikuna say they have been selling this fish for years, though the fish is mostly found in Lake Chivero's breeding zones, where fishing is prohibited.

Most waste found in the lake is old twine fishing nets, says Jean Betrand Mhandu, a member of the Lake Chivero Users Association and the national coordinator for Zimbabwe’s cohort of the African Youth Initiative on Climate Change. As a member of both organizations, Mhandu says he organizes and participates in events to clean up the lake.

During some of the cleanup events, volunteers have come across snakes and fish entangled in twine nets left by fishermen, he says. Tourists and park visitors have also contributed to pollution by throwing items such as bottles and plastics in the lake, he says.

Lake Chivero once was home to about 25 different fish species, but now there are only five, including tilapia, Mhandu says.