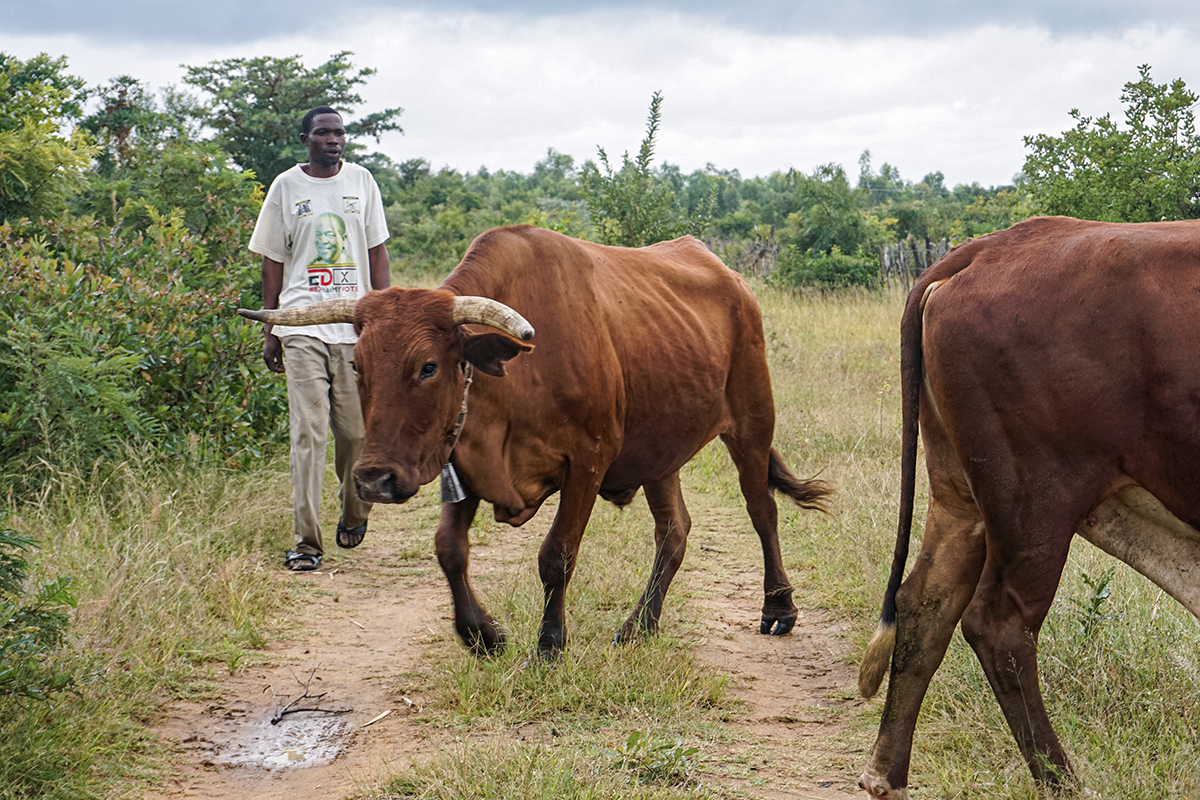 MHONDORO, ZIMBABWE – Musindo Dangaiso trudges through his cattle kraal. Grass and weeds grow rampant in the enclosure where he once kept 24 cows.

A disease came on suddenly: bloody noses, followed by tears. Dangaiso tried to administer medicine, but it was too late. Seven days later, all the cows but one – a calf – were dead.

Dangaiso had two options: eat the meat or sell the sick cows and carcasses at a reduced price. People in the area are willing to buy the meat for food, as there’s no clear evidence that it poses health concerns. Dangaiso decided to do both.

“I would not slaughter voluntarily with the little hope that my cows would survive,” he says. “But they would end up dying anyway.”

More than 50,000 cows died of the tick-borne disease that spread through Zimbabwe in 2018. 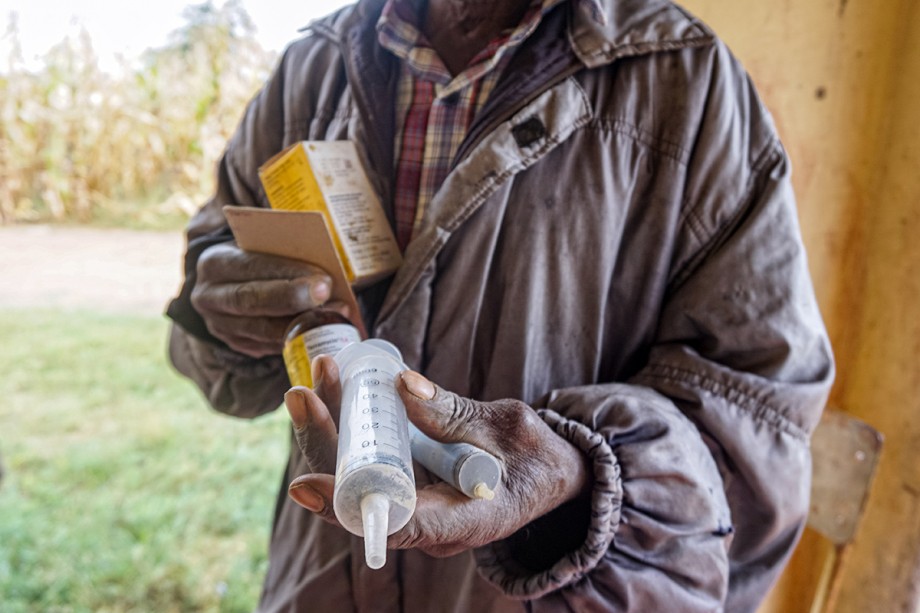 Musindo Dangaiso holds some of the medicine that he gave to his cows when they fell ill. He says it was of little use. Twenty-three of his cows died of the tick-borne disease that affected cattle in Mhondoro.

There’s a shortage of medicine to treat cows with the disease, says Earnest Mbire, the veterinary extension assistant in Mhondoro’s Mamina district.

That means farmers in the area are losing their livelihoods.

“Wealth is in the cows,” says Fanuel Machokoto, known locally as Chief Mushava, who took over as chief in Mhondoro in 2006. “Losing one is a big loss to a farmer because that is an investment in a rural area like ours.”

He says the issue is so widespread that people no longer come to him about it. When the problem was new, people asked him for help. Now, he says, they’re resigned to it. He says he’s lost four of his own cows to the disease.

“I had to sell [them] to people who were visiting this area looking for the sick cows,” he says.

“When the disease attacks cows, it wipes out all and leaves nothing,” Machokoto says.

Mbire says the disease affecting the cows hasn’t been a problem in the past.

“The brown ear ticks are the carriers of this disease,” he says. “We suspect that the movement of cattle transported the disease from other areas.”

He says the disease is most common in the rainy season.

l would not slaughter voluntarily, with the little hope that my cows would survive but they would end up dying anyway.Musindo Dangaiso, a subsistence farmer

Dipping cattle in chemicals weekly wards off the ticks. But to coat the cows in the chemicals, farmers need to take the cattle to dipping facilities.

Some of the fault lies with the farmers, who Mbire says sometimes do not recognize the importance of dipping the cattle.

“With the outbreak, farmers have lost faith with cattle dipping and are no longer paying the annual fee of RTGS$2 (16 cents) per cow for dipping services, because they feel that it’s of no use to them since they lost their cattle,” he says, referring to farmers who have a few head of cattle left.

But Machokoto says cattle dipping services have not been made consistently available to the farmers, despite government promises.

“For almost a year we didn’t have cattle dipping service,” says Felistas Dangaiso, Dangaiso’s wife, who lost five cows that she received as the bride price for her daughters.

“These were mine and were in my name as a mother and a woman, and now there is nothing,” she says.

She initially thought the deaths were being caused by evil spirits until a neighbour explained the disease to her. Regardless of what prompted the disease, she says the death of the cows has caused financial strain.

“If we faced any problems in the past we would sell the cows,” she says. “But now we have nothing. We have to rely on our children for sustenance.”

Richard Marunza, headman of Marunza village in Mhondoro, lost 25 cows to the disease. He says it manifested in their village last year.

He took his cows to the dip tanks, but he says the dip was used for a such a long time that the ticks became resistant and the solution too weak to kill them off.

“The government used to cater for the dip and we only paid a fee for dipping, which was then used to purchase the dip through the council,” he says.

“It took me a long time to rear these cattle,” he says. “I had my first cow in 1983. They grew in numbers and would help me to pay for my children’s school fees and other day to day needs.”

Dangaiso relied on his cows for the ploughing season. 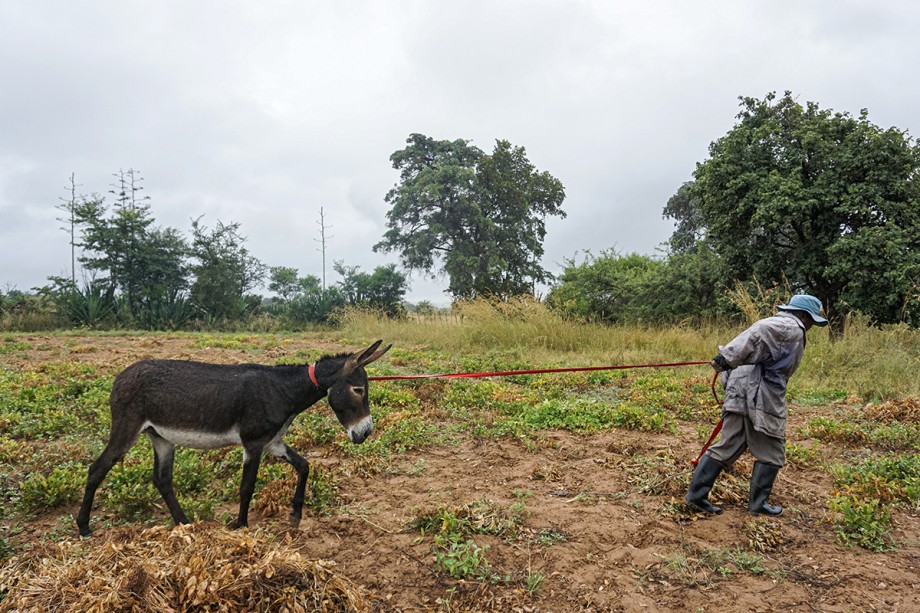 Musindo Dangaiso pulls one of the donkeys he purchased after losing his cows to disease. He uses the donkey to help with work such as ploughing and pulling his scotch cart – tasks he once relied on his cows for.

With them gone, he has purchased donkeys to help with the work around the home; cultivating, fetching water and making trips to the mill. But he says the donkeys did not come cheap, costing him RTGS$2300 ($189).

“There is a high demand and people are scrambling for donkeys,” he says.

And Machokoto says government officials have made no moves to aid the farmers.

“The government knows that cows are dying but we haven’t heard of plans to help people with regards to this,” he says. “I think a solution to this problem should be sought so that people do not continue to lose their wealth because of this disease.”

Linda Mujuru and Gamuchirai Masiyiwa translated some interviews from Shona to English.