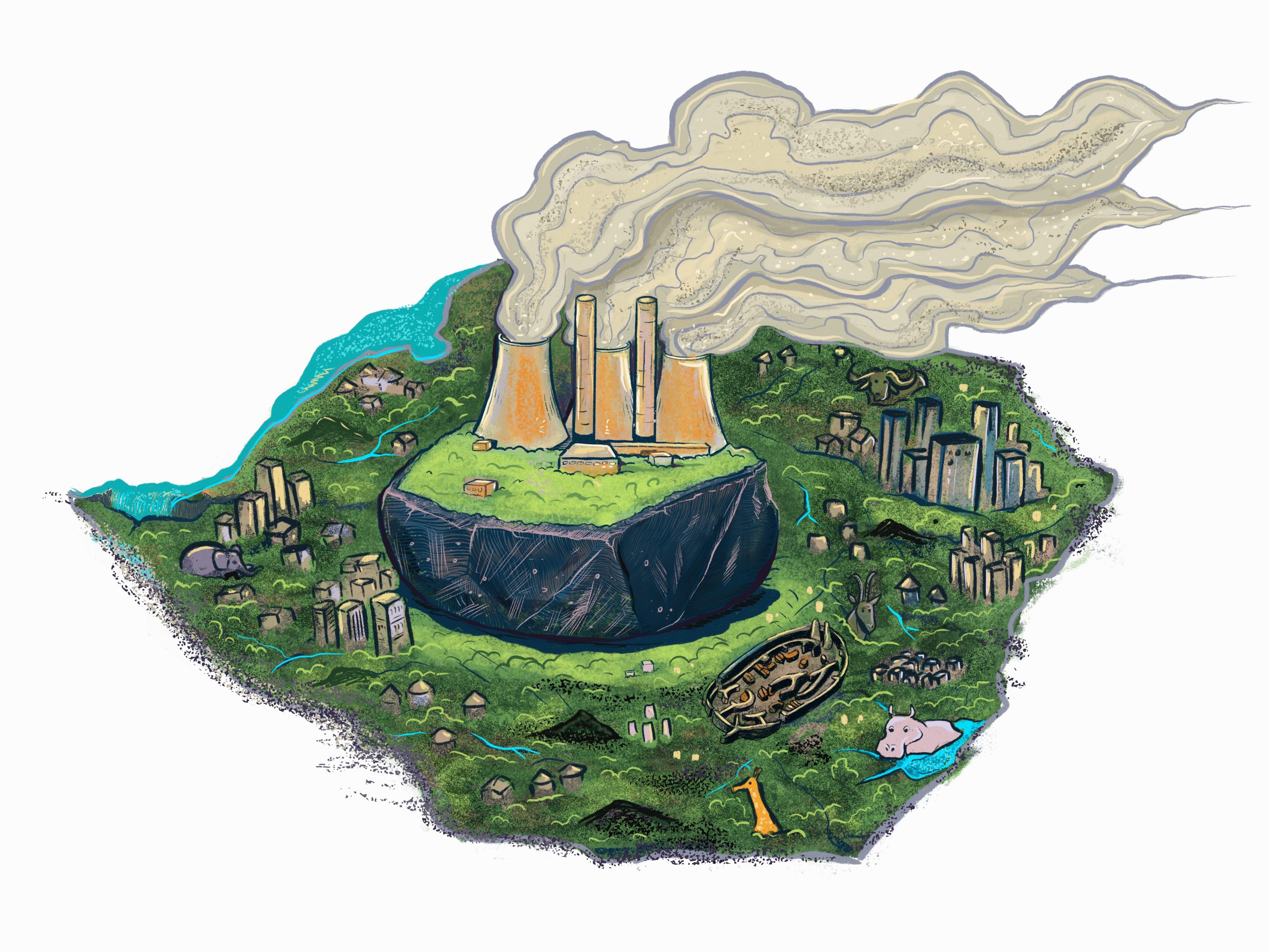 ZVISHAVANE, ZIMBABWE — Coal dust fouls the air in Hwange, a mining town in the Matabeleland North region of Zimbabwe, about an hour’s drive southeast of Victoria Falls. Black smoke and a throat-closing odor saturate the atmosphere.

Coal — a blackish-brown sedimentary rock said to be the dirtiest of fossil fuels — releases carbon dioxide, a greenhouse gas that worsens the warming of the planet and, ultimately, climate change.

Nonetheless, Zimbabwe, which relies heavily on coal, is intensifying investments in the industry amid a worldwide push to phase out the fossil fuel.

The United Nations, along with environmental activists at both the global and national levels, has pushed countries to reduce emissions that provoke global warming. In May 2019, U.N. Secretary-General António Guterres said the world “must stop building new coal plants by 2020.”

Zimbabwe, a signatory to the legally binding Paris Agreement to reduce global warming, has no such plans.

Instead, the country looks to pump up coal production and seeks to make mining in general a $12 billion industry by 2023. In 2018, coal contributed 0.4% to the country’s gross domestic product. 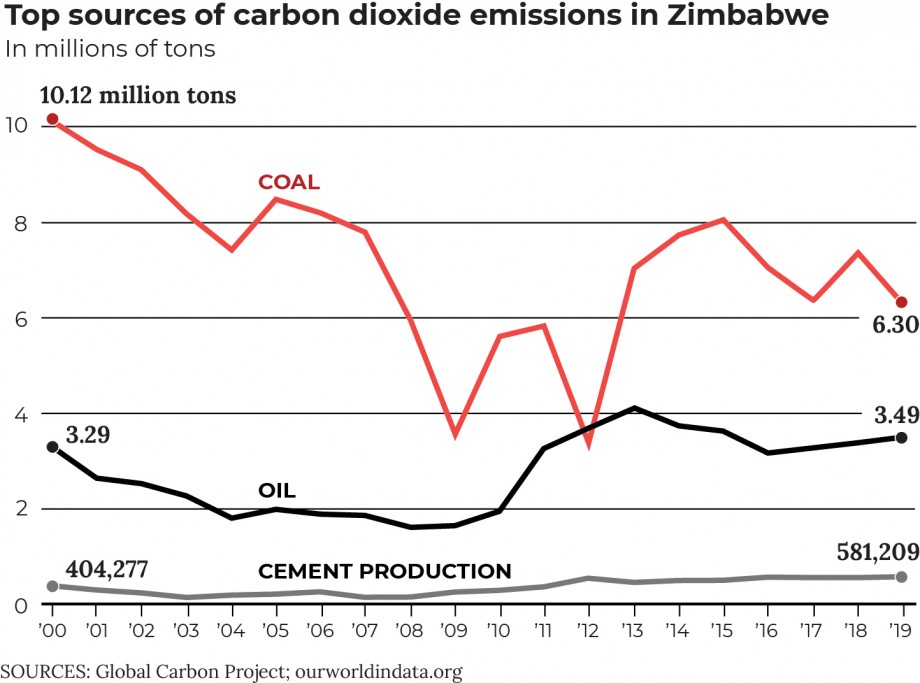 Environmental activists say this bucks Zimbabwe’s climate policy, which promises that the country will “promote renewable energy and adoption of energy efficient technologies.”

Lawrence Mashungu, a government climate change and mitigation expert, sees no conflict between the national policy and coal expansion in Zimbabwe.

“The coal project being implemented right now is actually at a much smaller scale than the initial plan — prior to knowledge on climate issues,” says Mashungu, who works in the Ministry of Environment, Climate Change, Tourism and Hospitality Industry, referring to a new plant scheduled to go up in Gokwe North district, about 348 kilometers (216 miles) from Harare, at an estimated cost of $3 billion.

Zimbabwe’s coal industry has existed for a century, and the country possesses 10.6 billion to 26 billion tons in reserve. That’s enough to last another 100 years.

In addition to the facility scheduled for Gokwe, Zimbabwe has four coal-fired power plants — in Harare, Munyati, Bulawayo and Hwange towns.

Simiso Mlevu, of the Centre for Natural Resource Governance, a Zimbabwe-based research and advocacy organization, says the country should abandon coal now and pour resources into renewable energy.

“If we do our part,” she says, “then we can petition countries who emit the most to pay towards resilience-building in poorer countries.”

The nation has moved toward renewable energy, Mashungu says. As an example, he cites the nearly 500 biogas digesters – systems that transform waste into energy – used by institutions and residences throughout the country.

Zimbabwe also enjoys about eight hours of sunshine a day. As of last September, the country had 55 solar plants from independent power producers. But only five were working. 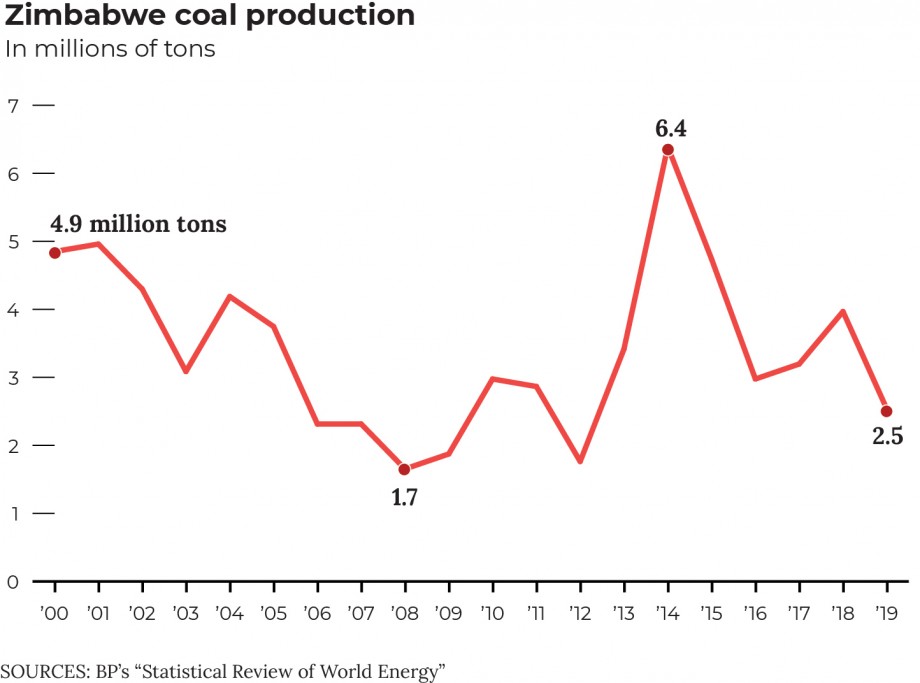 “We cannot abruptly switch off Hwange Power Station,” Mashungu says. “Our renewable energy plans have to mature first. When this happens, there will be a smooth switch from fossil fuels. It’s a learning process for everyone involved, and we are hopeful we will get to fully using renewable energy.”

Lorraine Chiponda, coordinator of the Africa Coal Network, an environmental advocacy group, says coal promotes not only pollution but also wildlife conflict and land degradation. Coal mining in parks, for example, has agitated elephants, causing them to attack locals, she says.

“We understand that the shift [to renewable energy] is not going to be abrupt as there are livelihoods to consider and jobs which may be lost,’’ Chiponda says. “But if we do not begin now, the coal mining technology will become obsolete soon, and politically the country will be marginalized.”

In Lusumbani village, which sits within Hwange town, Innocent Ngwenya isn’t opposed to coal mining. But he is concerned about its effect on ordinary people.

Ngwenya, 35, has lived in the village for 20 years. A logistics officer for a local trust that serves vulnerable people, he ticks off ways coal has upended life in Lusumbani: Blasting from mines shakes houses. Coal trucks constantly rumble through the community. And villagers are always breathing in coal dust.

Only mine employees get regular medical checkups, he says. Villagers often don’t know how coal affects their health.

“For over a decade we have been engaging different stakeholders over these concerns,” Ngwenya says. “Maybe they are working on it, but we currently don’t know what their answer is.”

Vimbai Chinembiri is a Global Press Journal senior reporter based in Zvishavane, Zimbabwe. She specializes in reporting on Zimbabwe’s extractive industries.