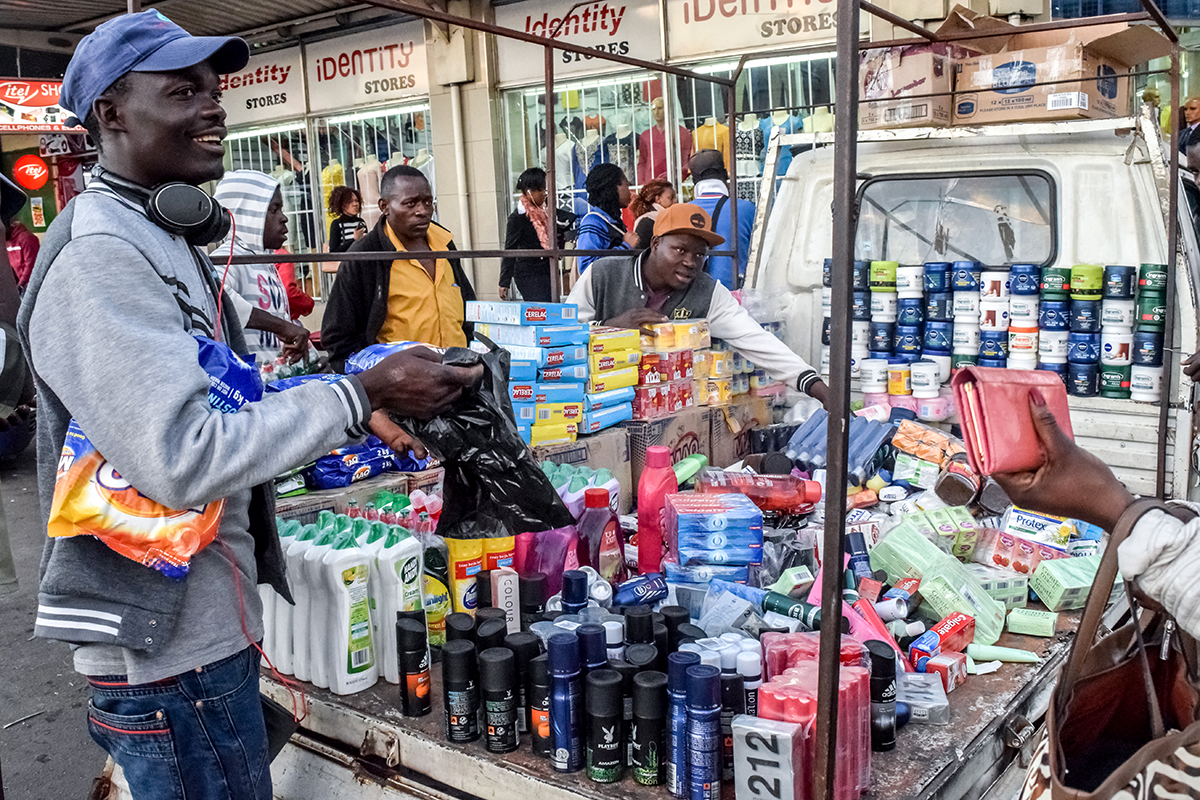 Most of the goods for sale on the streets here have been smuggled in from neighboring countries, including Mozambique, South Africa and Zambia.

Sinikiwe Masola, a single mother living in Mutare, a town near the Zimbabwe-Mozambique border, says she is one of the smugglers.

“I have bills to settle, school fees to pay, and l have to take care of my siblings. Since I am not employed, this is the only option I have,” she says.

Since 2016, Zimbabwe has worked to control imports into the country. With its crashing economy, the government aims to encourage buying goods locally by requiring importers to pay heavy fees. But as the cash crisis drags on, Zimbabweans say smuggled goods are the only ones they can afford.

Masola says informal business is all she can afford.

“I cannot afford to apply for an import license, and I cannot operate from a shop. I will have to pay a lot for rentals and other utilities,” she says.

But Masola’s business is risky. She says she frequently has to run away from the police, who often confiscate goods from street vendors.

But the threat of police isn’t stopping vendors or customers.

I have bills to settle, school fees to pay, and l have to take care of my siblings. Since I am not employed, this is the only option I have.Sinikiwe Masola, a smuggler living in Mutare

Since longtime President Robert Mugabe was removed from office in November 2017, the cost of goods has tripled in most shops.

A packet of baby food that cost $1.50 in November now costs $5. Meat sells for $9 per kilogram (2.2 pounds), up from less than $4. Prices for everything, from laundry detergent to cooking oil, have rapidly increased in shops, but prices on the street stay constant.

With banks still limiting the amount of cash customers can withdraw to $60 per week, buying basic goods on the streets is the only option for most.

A small package of laundry detergent, which likely has been legally imported, costs $7.65 in a grocery store, but the same detergent costs just $4 on the street, where it is has been smuggled in from a neighboring country. Goods are paid for using U.S. dollars, the country’s primary currency.

Grant Nyeke has been trading on the streets of Harare, Zimbabwe’s capital, for five years. He sells basic commodities from the back of his small truck.

“The commodities I sell are a bit lower priced than that from formal shops,” he says.

Like most vendors who sell groceries from the streets, Nyeke buys his goods from people who smuggle basic commodities from South Africa and Mozambique.

“We are in constant clash with the city council, and at times our stuff is taken away by council police,” he says, adding that he has been briefly arrested once for his illegal street trade.

Jose, a trader who asked that only his first name be used for fear of arrest, is new to selling smuggled commodities. He says the constant cat-and-mouse game with police is a challenge.

“Last week, regular raids were done during the day, and people lost their stock,” he says, adding that he prefers to sell at night.

The threat of police isn’t stopping customers, either.

Mildred Muzanechita says she prefers to buy on the street.

“First, the prices are lower than in the shops, and second, with the cash crisis, you spend a long time waiting in [line] for your turn. The swipe-cards network is not stable,” she says, referring to the new wave of debit cards that are becoming popular here. “So if I have cash, I just go buy in the streets.”

Smuggling basic commodities is bringing short-term reprieve to residents who are experiencing increasing poverty because of the country’s economic crisis, says Tafara Chiremba, a social economist.

But it comes at a cost, he says.

Politicians and industry experts are debating strategies to curb smuggling. One strategy would be to adopt the rand, the currency of South Africa, as opposed to the U.S. dollar, which became the country’s primary currency after inflation caused Zimbabwe to discontinue its own currency in 2009, says Richard Chiwandire, vice president of the Confederation of Zimbabwe Industries, CZI. In 2009, Zimbabwe printed a $100-trillion-Zimbabwean-dollar bill.

“At CZI, we are advocating for the increased use of the rand as a transacting currency and the U.S. dollar as reserve currency,” he says. “The rand will act to the disadvantage of the cross-border traders, because the rand is a weaker currency than the U.S. dollar.”

“We’re running a campaign to confiscate things from vendors,” he says. “The perishables we destroy on the same day that we confiscate from vendors. If cooking oil, for example, is sealed, we record the number of bottles and cite the things that were taken from the owner.”

If traders comes to get their confiscated goods, they must prove the goods were legally imported and pay a storage fee, Chideme says.

“Some people come to claim their goods, and some do not. The goods that are not claimed are then auctioned later,” he says.

But for Masola and many others, smuggling is their only hope to make ends meet.

Evidence Chinjerai and Linda Mujuru translated some interviews from Shona.