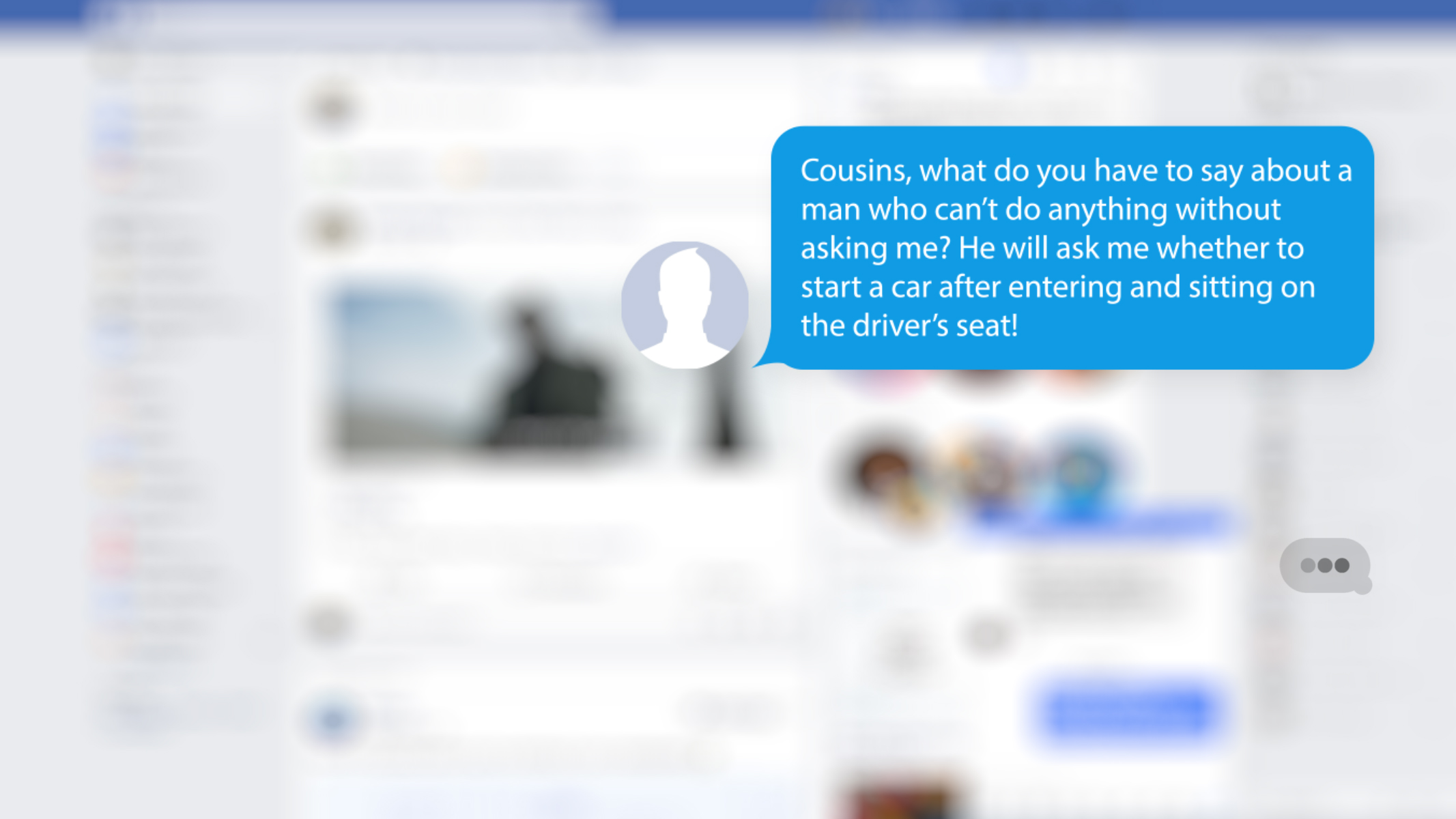 One such group hosted on Facebook is called Pahushamwari Hwedu (PH), which means our friendship. It has more than 36,000 members, all of whom seek out the space for advice on marital, political and social issues. Members ask for advice anonymously through the group administrators, whom they trust to keep their secrets.

To join the group, a woman must be seconded, or approved, by someone who is already a part of the group, to ensure that only female Zimbabweans are allowed in.

Cecilia Gupiro, who has been a member of the PH group since 2011, says people commonly ask for marital advice on the site.

“Most of the talk on the group is about men cheating and the acceptance of small houses or ‘side chicks’ by official wives,” she says of the common trend of men having extramarital affairs.

“Before social media, a lot of women suffered in silence about a lot of issues such as domestic violence, men cheating, self-esteem issues or even choosing a career. But now, a lot of positive advice can be shared on such groups,” she says.

Gupiro adds that there are now several of groups such as PH. “l am also part of a women’s group on Facebook called ‘Ladies Retreat,’” she says.

As political and economic turmoil drives more Zimbabweans overseas in search of stable employment, social media is replacing the traditional role of the “aunt” who provides advice to women on marital and social issues.

According to the International Organisation for Migration, approximately 500,000 Zimbabweans have legally migrated to other countries since 1990.

But now, a lot of positive advice can be shared on such groups.Cecilia Gupiro, PH group member

Tshila Ndhela, an African culture researcher, says the role of giving advice on marital issues in Zimbabwe is traditionally assigned to different female relatives, who are generally called “aunt” or “auntie.”

“The role of the aunt is an educational role,” he says, adding that aunts advise on culture and tradition at every stage of life. “We are looking at roles and rites of passage. These are the stages that every African person goes through.”

In the PH group, Zimbabwean women connect across long distances to give and get advice from a Zimbabwean perspective.

One of the administrators, who calls herself “Olivia Pope” in the group, a reference to Kerry Washington’s bold female character in the ABC television show “Scandal,” says the PH group is replacing a valuable social structure that has come undone with Zimbabwean migration over the past decade.

“Even though we do not meet in person, people do get advice. Even I have gotten advice from the group,” she says.

“There is bound to be criticism and arguments from people within the group and even from men who do not know about the group. They just assume that since it’s women who make up the group, they are just talking about silly stuff,” she says.

Felly Muchandibaya, 29, who has been a member of the PH group for more than a year, says she visits the site to see what others are seeking advice for, but those arguments are one reason she’s never asked for advice herself.

“l have never asked for advice on the group, but there was a time l almost did. I had a burning marital issue, but l wasn’t sure how discreet the administrators would be, and l didn’t know if they would disclose my identity to their close acquaintances,” she says.

While the groups provide comfort and advice for Zimbabwean women, Ndhela, the cultural researcher, says these groups are an indication of disintegrating family structures.

With the permission of PH administrators, Global Press Journal was allowed into the group to see the kinds of questions asked and advice offered. This is a verbatim transcript of a recent conversation:

Advice seeker: Cousins, what do you have to say about a man who can’t do anything without asking me? He acts like he will ask me whether to start a car after entering and sitting on the driver’s seat? Even staff we have talked about previously he asks me several times over. When he is paying school fees for our child he even says l should confirm the name of the school or our child’s grade! Ummm l am almost going crazy!

Comment 1: Its irritating but try to ignore him when he asks you for guidance so that he is forced to make a decision alone. When he comes back, praise him so that he feels like he did a good job, reward him for a job well done, boost his ego so that he gains confidence. If he makes the wrong decision don’t make a big deal out of it.

Comment 2: What do you want really? Just answer him whenever he asks, are you the one giving him the money? Its just answering questions, women you don’t know what you really want!

Comment 3: he is very confused, tell him that you want to be asked about important staff only not every little silly and minor thing, that’s annoying.

Comment 4: you should thank God you are lucky some man just plan without you and its not nice

Comment 5: maybe you are the problem, maybe you never approve the things that he does and you shout at him such that he end up looking for your approval all the time.

Comment 6: I’ll confess…lm a control freak…lm so used to doing things alone and things being done my way…l had to accept that about myself and self introspect…but my ex also had a problem …no backbone, it made him look “weak” and it frustrated me because i function better with an alpha male…dominant type…and you are soo right, it becomes mentally exhausting…it’s like you are dating a kid.

Comment 7: you could be talking about me right there [laughing emojis]. I can relate so well to what you’re saying coz I’m exactly the same. It becomes more frustrating when the male is weak to begin with then doesn’t know how to handle your strength and he becomes completely passive.