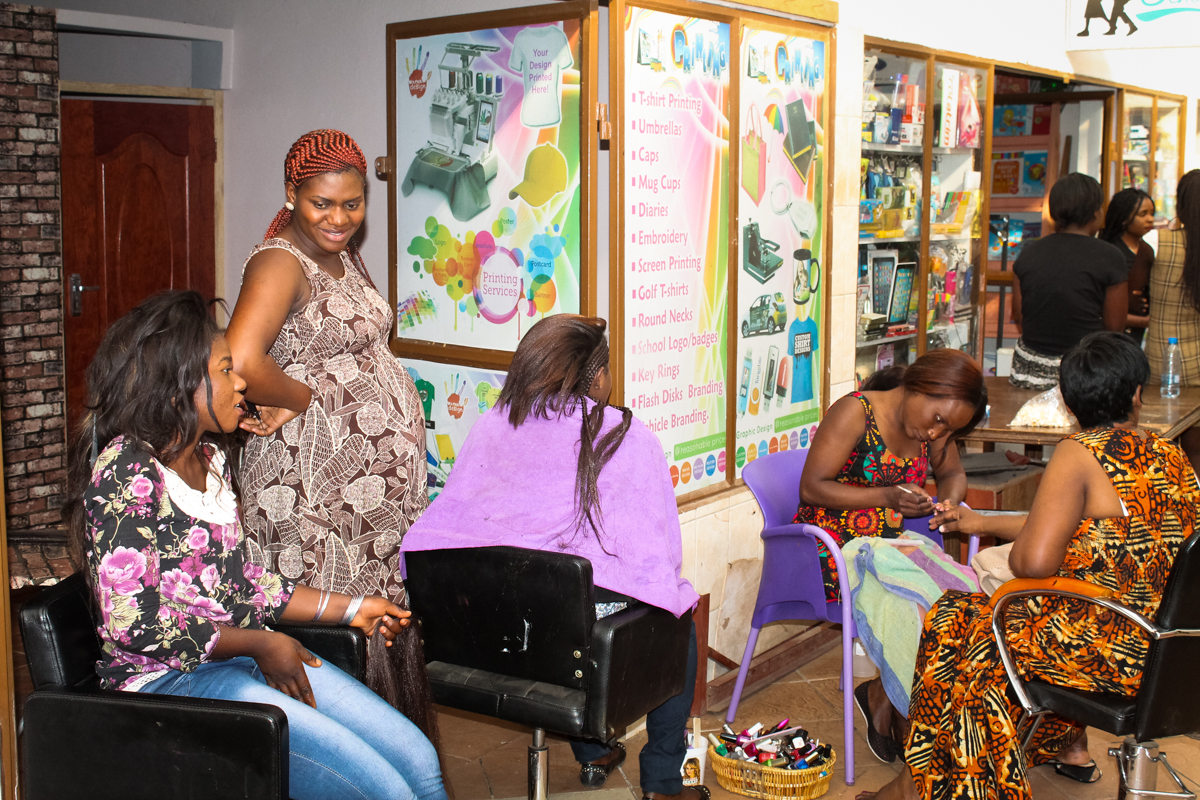 LUSAKA, ZAMBIA – It’s afternoon, and Roda Silwimba, a hairdresser in Lusaka, sits idly on a couch outside her salon with two of her workers.

Silwimba has not had a single client since morning because the power to her shop has been temporarily cut; most of her clients have her wash their hair, then dry and style it using electrical hair gadgets. When she has no power, she attends only to clients who want their hair plaited, not washed.

“I don’t know how we will survive with this load shedding,” she says to the salon attendants. “You need to be paid, and from morning we have not had a single customer.”

Since June, Zambia power company ZESCO has been carrying out a massive power-rationing program in which every part of the country goes without power for eight hours on average every day.

Silwimba mostly gets power during the night, which doesn’t help because her business is closed by then.

Running the business has become a struggle.

“Since this load shedding started, I have been struggling to pay my workers. Even just raising money for rent is a struggle,” Silwimba says.

Power cuts made necessary by lack of enough water to generate electricity have crippled Zambia’s economy. The informal sector, which employs 88.7 percent of Zambia’s labor force, has suffered the most as small businesses lack the financial capacity to invest in alternative sources of energy. As a consequence, the government projects GDP growth to slow to less than 5 percent, from 6 percent in 2014.

In the short term, ZESCO has started importing power and is constructing more power-generating stations to increase power output. And to keep budding entrepreneurs in business, the Zambia Chamber of Small and Medium Business Associationsis negotiating with financial institutions to give them loans so they can buy generators and solar panels.

The country had a power deficit of 985 megawatts for September, according to a statement from the energy minister.The projected demand for the month was 1,014 megawatts.

Small businesses that don’t have generators, including salons, barbershops and welding shops, have to suspend operations during load shedding. 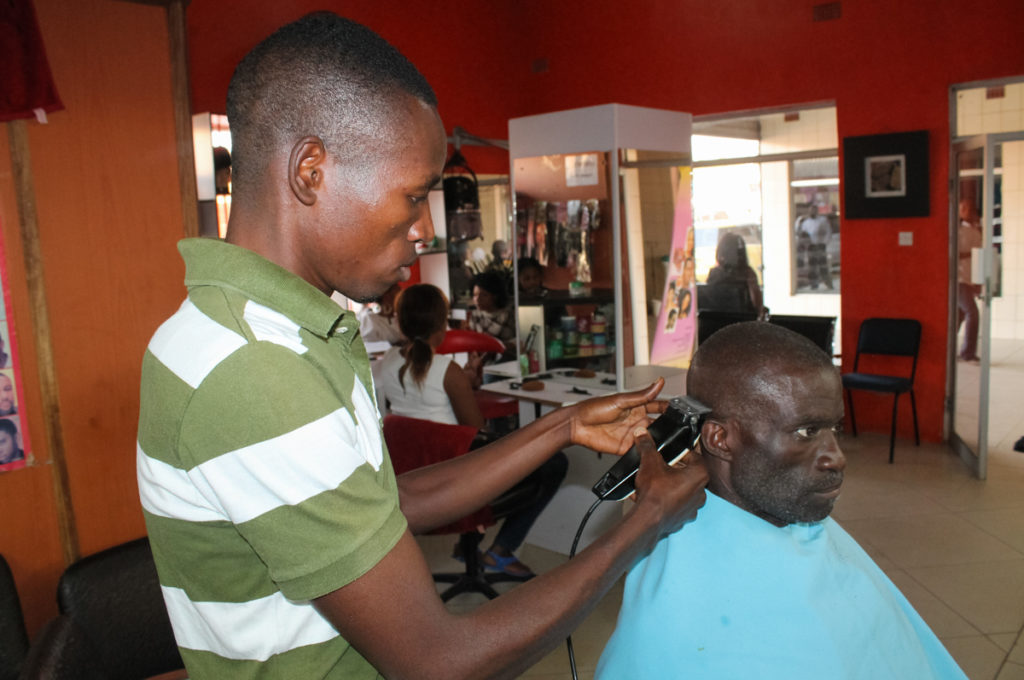 Gabriel Kasongo, a barbershop owner, tends to a client after power is restored in Lusaka, Zamiba’s capital, at 6 p.m. 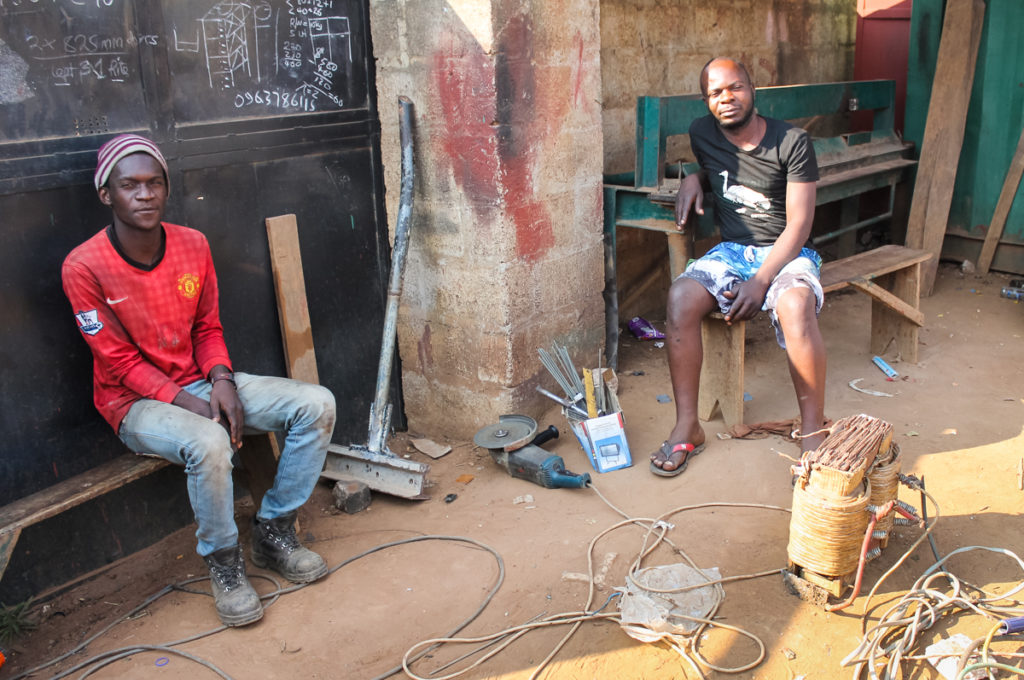 Welder Edward Lungu and Mulenga Mwansa sit idly at their work site, waiting for power to be restored. 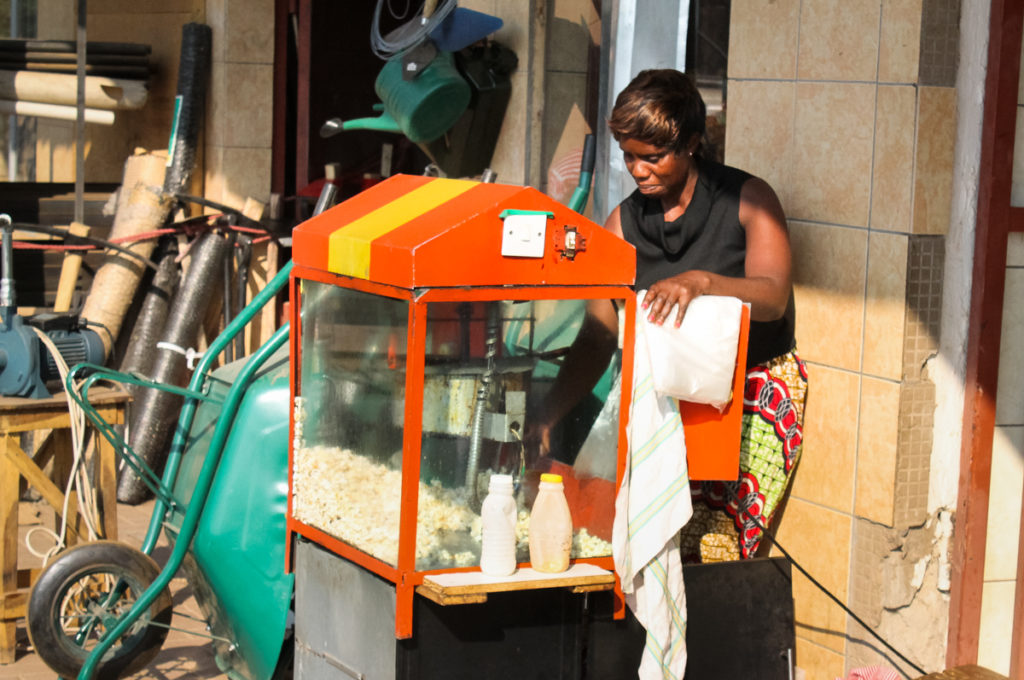 Mervis Mwaane, who sells popcorn streetside, says her clients prefer the snack fresh and hot. Her business has slowed since load-shedding started. 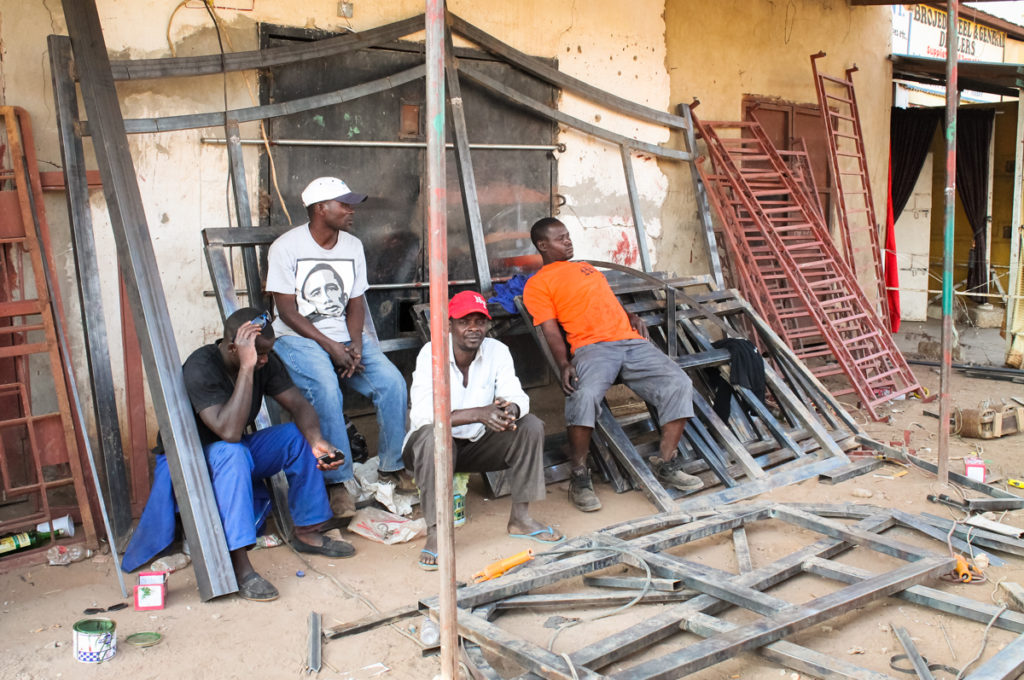 Welders wait for power to be restored outside their workshop. Dzidzikani Banda (right) says he loses about 10,000 kwacha ($858) a month because of load shedding.

The Zambia Chamber of Small and Medium Business Associations and the Economics Association of Zambia are yet to compile figures of how much revenue has been lost so far, but they estimate it to amount to millions of dollars.

ZESCO has also suffered losses as a result of its power-rationing program. The company lost $116 million in revenue because of the current problems, Christopher Yaluma, minister of Mines, Energy and Water Development, told Parliament in July.

Like hairdressers, welders are struggling to stay in business.

Dzidzikani Banda, a welder in Kalingalinga, a Lusaka suburb, says he loses about 10,000 kwacha ($856) a month because of power cuts.

“Most of the time, we stay without power almost the whole day, and we can’t operate without it,” Banda says.

Making a 5-meter-tall metal gate used to take him two days before loadshedding. Now, it takes him a week. Banda’s shop is small, so he often works outside, which poses another problem.

“Sometimes we try to work at night when power is restored, but we can’t go beyond midnight because we risk being attacked by thieves,” he says.

Gabriel Kasongo, a barber in the Northmead area of Lusaka, has tried increasing his prices to minimize losses, but it hasn’t helped. There’s not much he can do if his equipment can’t be hooked up to electricity, he says.

“I increased the prices by 5 kwacha (43 cents), but clients complain and I end up charging them the same old prices,” Kasongo says.

He used to have an average of 15 clients a day before load shedding but now attends to about six, he says.

Mervis Mwaane, who operates a sidewalk popcorn machine, says clients prefer fresh, hot popcorn but that because of power rationing, she cannot meet their demands.

“When there is power, my business moves well because the popcorns are fresh and hot, but since most of the time we have no power, the business has really slowed down,” Mwaane says.

Since this load shedding started, I have been struggling to pay my workers. Even just raising money for rent is a struggle.Roda Silwimba, hairdresser in Lusaka

Economics Association of Zambia program officer Kapele Ndumba says traders need to stop complaining about the power rationing and instead look for alternative forms of energy such as generators and solar panels to keep their businesses afloat.

He says that although using generators and solar panels will raise the cost of doing business, it is a better remedy than shutting down.

But Silwimba says a business such as a salon cannot afford to run on a generator because fuel is expensive. A liter of diesel costs 8.59 kwacha (71 cents). Silwamba would need at least 12 liters of diesel a day, meaning she would have to spend about 100 kwacha ($8.61) per day on power alone if she had a generator. In normal circumstances, she uses electricity worth about 400 kwacha ($34) per month.

Bandasays a generator to cater for the type of machines he uses for welding would cost about 20,000 kwacha ($1,722), which he can’t afford, especially now with the loss of business.

“Our machines are big; hence we need a big generator, which is expensive. Fuel is expensive too,” says Banda.

Mwaane says a generator for her popcorn machine isn’t feasible becauseit is too small of a business.

“Honestly, a generator for a popcorn machine? I am better off closing the business,” Mwaane says.

This has not eased the power crisis, because clients maximize their usage of electricity when it is available, defeating the rationale behind power rationing, Banda says.

Silwimba disputes Bessie Banda’s claim that people overuse power when it is available.

“During the day, we rarely have power. Mostly it is restored at night. So how can we maximize electricity when we don’t work at night?” she says.

In September, President Edgar Lungu instructed ZESCO to identify and contract with companies that offer low-cost solar power until the country gets to its normal power-generation capacity. Lungu also announced that the government is working to raise $500 million it needs to invest in the energy sector.

A 300-megawatt coal-fired power plant is under construction in Maamba, Southern Province. It is expected to contribute 150 megawatts by the end of November and another 150 megawattsin the first quarter of 2016, according to a statement from energy minister Yaluma. The power crisis will ease once this power is added to the national grid, he says.

Bessie Bandasays the energy crisis might ease sooner. The rainy season starts in November and might cause a rise in water levels behind hydropower-generation dams.

Most of the financial institutions the organization has talked to have agreed to make loans to small-business owners, she says.

Prudence Phiri, GPJ, translated some interview from Nyanja and Bemba.

None of the sources in this story is related.