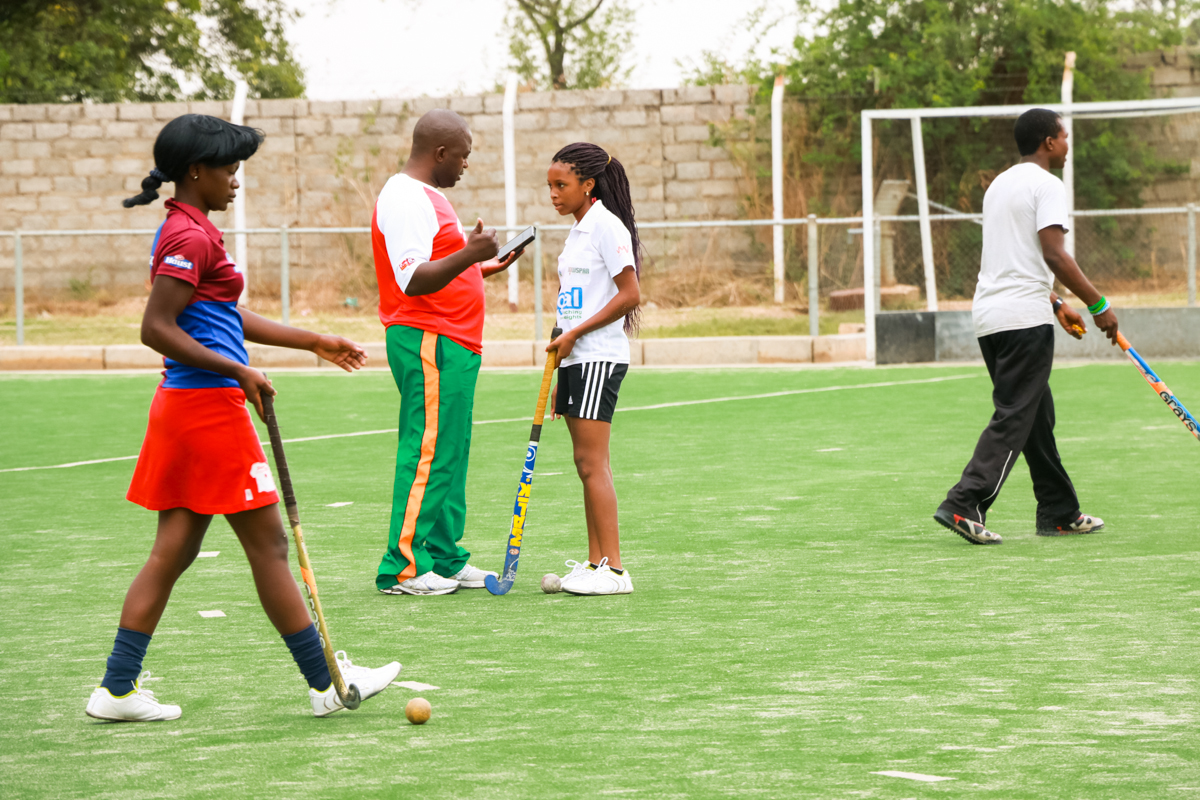 As the players gather at the center of the sandy outdoor field to hear instructions from the coach, Thomas Mumba, six girls from a nearby slum walk toward them hesitantly.

Player Loveness Mwenda, 16, calls out to the girls.

“Here, come over,” shouts Mwenda, the youngest member of the national girls’ team. “How are you going to learn from that far?”

Mwenda takes the new girls through their paces, offering instructions as she dribbles a hockey ball with ease. After several passes, she stops to help a girl who is struggling to hold her stick, to the amusement of the other newcomers.
Mwenda smiles but sends a warning to the laughing girls.

“It is not as easy as you think,” she says. “Most of you will fail to even form a proper stance.”

After all but disappearing for more than a decade, hockey is making a comeback in Zambia.

Mwenda’s team qualified for the Second Summer Youth Olympic Games in Nanjing, China, last year, becoming the first sports team in the country to go to an Olympic-level competition in 16 years. The team is now training for the 2016 Summer Olympic Games in Rio de Janeiro.

Hockey was a vibrant sport in Zambia until 1997. That’s when state-run mines, which sponsored sports, were privatized, says Mumba, who is also the coordinator of the national team. The new company owners suspended funding of all sports.

Football – the game Americans call soccer – survived without the sponsors because it was widely played, even in poor areas, Mumba says. All football players need is a ball.

Historically, only prestigious private Zambian schools played hockey, as they do not depend on corporate sponsorships.

“Even today, as the sports’ mother body, we can’t fully fund all sports disciplines in the manner that they ought to be funded because the government has little resources with so much to do,” Chalabesa says.

In 2009, Mumba, now 41, and Floyd Chomba, 25, now the girls’ team coach, decided to fix this. The two are credited with the nationwide revival of hockey, as confirmed by the Zambia Hockey Federation.

Mumba, a physical education teacher at upscale Lusaka International Community School, underwent six months of training in hockey coaching in South Africa courtesy of the school. After coaching the sport there, he wanted to teach it to children from underprivileged backgrounds.

Chomba learned to play as a student at Ndeke Secondary School in the Copperbelt province. He says he wanted to help revive hockey because he is passionate about it.

They attracted about 90 players, but most of the players dropped out because there wasn’t enough equipment – and because they had to train on bare ground instead of proper turf. The players, ages 15 to 21, were then training at OlympiAfrica, a sports center in Lusaka that is still under construction.

There are now four hockey clubs in Zambia.

Three of them – the Lusaka Sharks, the Lusaka Tigers and the Dee Stars – are based in Lusaka. The fourth club, the Ravens, is based in the Copperbelt province town of Kitwe. Each club has a girls’ team and a boys’ team.

National team players are drawn from the four clubs.

The teams were able to purchase their equipment with a one-off sponsorship they received in 2010 from Kadishi Foundation, a Netherlands-based organization.

In addition, the OYDC has been holding monthly hockey tournaments sponsored by Coen Tuelings, the chairman of Brussels-based Merifin Capital.

Mwenda, one of the first players to be recruited five years ago, joined out of curiosity. She didn’t know anything about the sport, she says. Now, it’s a big part of her life.

“I have no time to get involved in illicit activities because from school I come to training,” she says. “That is my daily routine.”

Mumba trains students from slums to challenge the perception that hockey is a sport for people with money, he says.

Recruiting players from slum schools was challenging because neither the students nor the teachers were familiar with hockey, he says.

“Hockey equipment was not readily available after the mines halted sponsorship,” he says.

Chomba, who led the girls’ team at the Youth Olympics, says he traveled around Lusaka schools with a hockey stick and ball to introduce potential recruits to the game. Now, the national team is made up of athletes from underprivileged backgrounds.

Chomba is proud of the teams’ performance.

“It is not easy to build a team from scratch and manage to qualify to the Olympics,” he says. “I have great applause for the boys and girls.”

The hockey team was only the second Zambian team to go to an Olympic event. The national football team qualified for the main Olympics in 1988.

Mumba has seen remarkable improvements in Zambian field hockey, but more must be done to spread the sport countrywide, he says.

The limited number of clubs makes it difficult to operate a proper league, he says. Like a football league, it really needs 10 to 15 clubs, he says.

“Our aim is to have hockey in all parts of the country, but we lack sponsorship,” Mumba says. “We need to convince sponsors that the sport is here to stay.”

The Tuelings sponsorship is for the teams at the Olympic Youth Development Center. More sponsors are needed, he says.

The kind of training Mwenda gave the girls who joined the team on the turf is part of Mumba’s initiative to introduce hockey to more people.

“It is unbelievable how these young boys and girls have raised the profile of our country in such a short time,” she says. “For me, there is a great future in hockey because these youths will play in the national team for many years to come.”

The federation will ensure that the teams get sponsorship for the sport to grow, Kennedy says.

Already the federation has secured the sponsorship of Phoenix of Zambia Assurance Company, an insurance company. That will enable the federation to host a national hockey tournament, she says.

“We still want more to come on board so that every province can have a good hockey field like the one at OYDC,” she says.

More sponsors could mean revenue for Zambia as a whole, says Olympic Youth Development Center Director Clement Chileshe. If hockey grows to the point where Zambia can host international tournaments, foreign teams will come and spend money there, he says.

Now, the national team is preparing for the 2016 Olympic Games.

Hockey 5s, a faster version of hockey that is played at the Olympics, is new to the Zambian team. Mumba is teaching players how to play this genre of hockey.

“We are working on speed, accuracy on goal, and general endurance during play,” Mumba says. “We played the competitive hockey 5s for the first time at Youth Olympics in China, so we took note of our mistakes.”

Mumba is also recruiting more players to increase competition for slots in the national team.

He is confident that both the boys’ and girls’ teams will qualify for the 2016 Olympics and put Zambia on the world map.

“We have made it to the Youth Olympics,” Mumba says. “Nothing can make us fail to make it to the main Olympics. We have what it takes.”