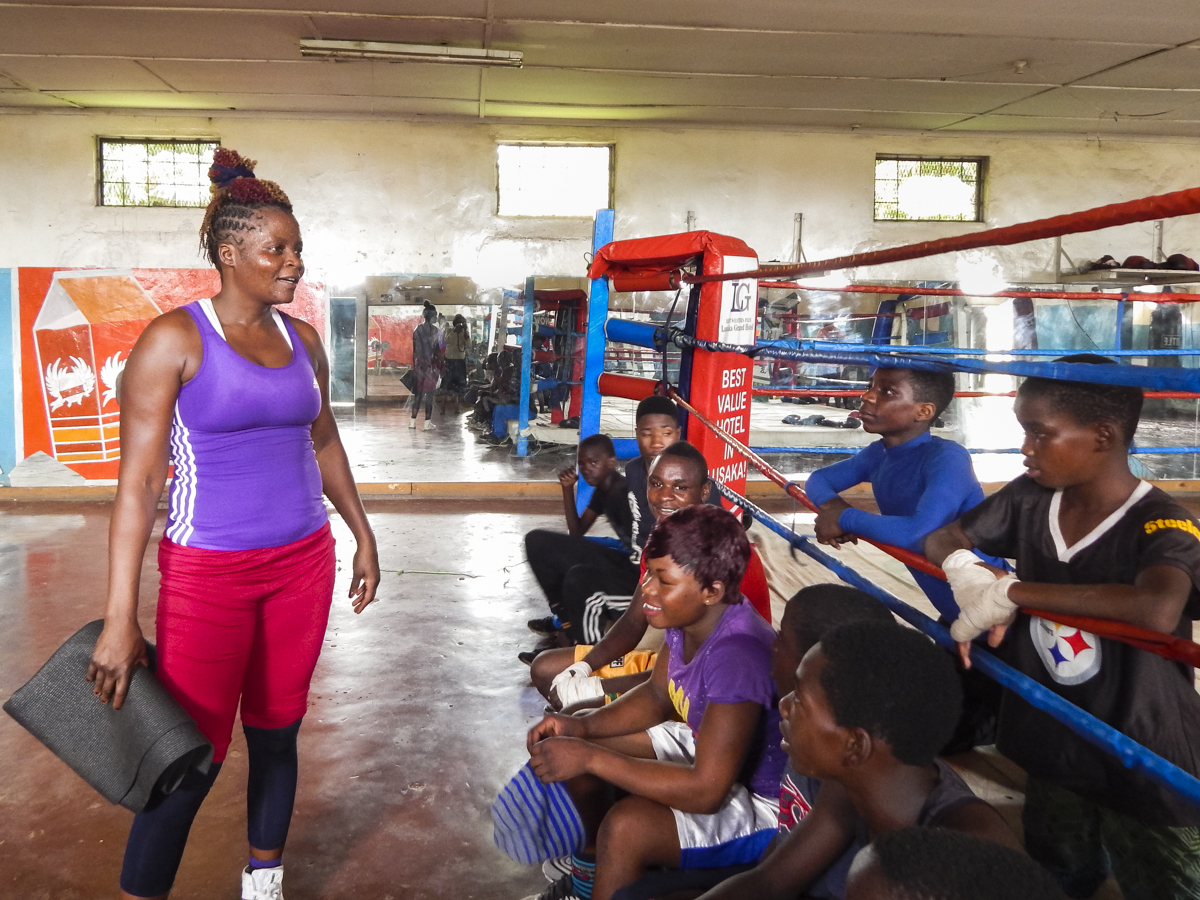 LUSAKA, ZAMBIA — In a country where only 4 percent of girls graduate from high school, women and girls are turning to boxing to escape poverty.

Inspired by Esther Phiri, who rose to capture successive international boxing titles, women’s boxing in Zambia has eclipsed men’s in popularity. The country prides itself on six female professional boxers, with Phiri having led the way by winning the Global Boxing Union female world super featherweight title in 2008.

Davies Nseluka, secretary of the Zambia Professional Boxing and Wrestling Control Board, says girls are filling the gyms and women are swelling the nation’s amateur ranks. Many are seeking a livelihood through boxing.

“When we talk of boxing in Zambia today, female boxers are the ones that come to one’s mind,” he says. “The women have raised the bar in boxing. This is encouraging to young girls and women.”

GPJ interviewed Esther Phiri and two other Zambian boxers: Catherine Phiri, a world title holder and a UNICEF brand ambassador, and Barbara Banda, a boxer who has just broken into the professional ranks. All three encourage girls and boys to try the sport. They each also have returned to their studies, challenging girls and boys to continue their educations as well. 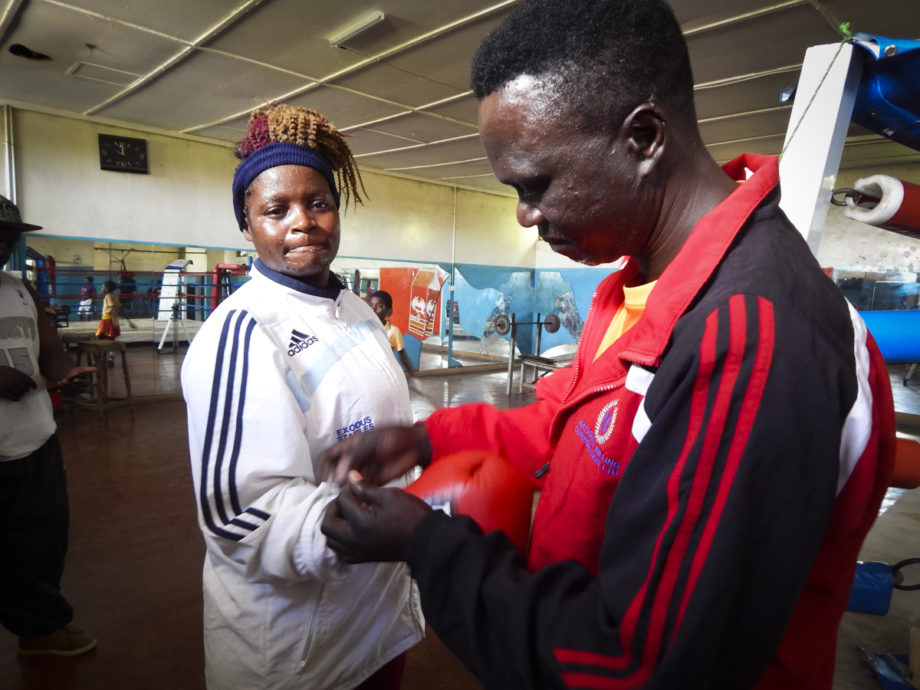 Esther Phiri with her trainer and manager Anthony Mwamba, in Lusaka, Zambia.

A single mother who was once a vegetable vendor, Esther Phiri burst onto the international boxing scene in 2008. She is now a household name in Zambia. She says she found boxing after being shamed into going to a gym because of her weight.

“I had no intentions of becoming a boxer,” she says. “I was fat and people used to laugh at me.”

One day, “some guys that were going to a gym encouraged me to join them, and I did. It was at the gym that I discovered how fit I was, and I was encouraged to start boxing,” Phiri says

After her initial world victory in 2008, she went on to win the Women’s International Boxing Association world super lightweight title in 2010, when she fought Brazil’s Duda Yankovich. Phiri later defended that title in 2011, and the same year captured the International Boxing Organization world female super lightweight title, beating Lely Luz Florez of Colombia in 2011.

Born and raised in the slum of Mtendere, having dropped out of school in the sixth grade, she became a single mother at 16, just a year before she began boxing.

Phiri says she is using her celebrity status to inspire young people to take up boxing and avoid engaging in illicit activities.

“Our gym has attracted a lot of girls and boys and it keeps them away from vices like sex, drugs, even stealing,” Phiri says, wiping away sweat after a training session. “This gym is a symbol of hope for them.”

Phiri’s trainer, Anthony Mwamba, says his gym, surrounded by slums along the Great North Road, has become popular among the girls and boys in the neighborhood because of Phiri’s fame.

“We have more girls coming to the gym because they see themselves as future champions once they see Esther,” says Mwamba. “They relate with Esther’s life because she also came from a slum.”

Phiri has been inactive in boxing since May 2015, when a fight with Sandra Almeida of South Africa for the interim Women’s International Boxing Association world welterweight title ended in a technical draw. Currently, she says, she is focusing her energy on academic work.

“I had been studying even when I was actively fighting, but now I need to focus more. I will be back in the gym later,” she says.

In the future, Phiri hopes to own a boxing academy for girls, to increase women’s participation in boxing. They’ll become self-reliant that way, she says.

“Girls are vulnerable and need support,” she says. “Everything favors men. Even when a girl falls pregnant, she is the one that drops out of school while the boy or the man continues to enjoy life.” 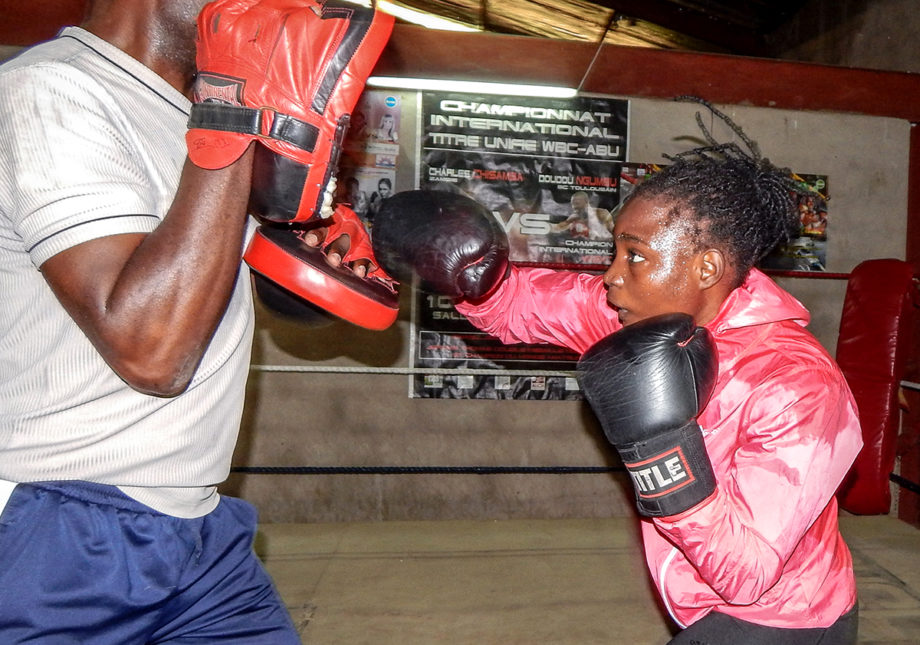 Catherine Phiri trains with Greetings Kaonga, one of her trainers at the Oriental Quarries Gym, in Lusaka, Zambia.

Catherine Phiri, who is not related to Esther, was nicknamed “Esther Phiri” for hitting hard during street fights with peers.

“I earned myself the name ‘Esther Phiri’ because I used to beat anyone that crossed my path,” she says. “I am very quiet but very temperamental.”

She says she became interested in boxing at the age of 17, when her family encouraged her to become a boxer.

Having fought as an amateur for a year, Catherine Phiri says she decided to pursue boxing as a profession when she dropped out of school in 2010, after failing her 9th grade examination.

She made her professional debut on May 28, 2011, against her fellow Zambian Esther Chalwe and won the fight before recording another victory against Namibian Cecilia Pitisen.

Since then she has been rising through the ranks of fistic lore.

In 2015, Catherine Phiri suffered her first defeat as a professional boxer when she lost the interim WBC World female bantamweight title to Christina McMahon of Ireland.

The next year, however, she came back, winning the coveted WBC world female bantamweight title by defeating champion Yazmin Rivas of Mexico. She then successfully defended the title against Gabisile Tshabalala of South Africa.

She was appointed a UNICEF brand ambassador in 2016.

Despite her fame, Catherine Phiri decided to go back to school in 2013 as a full-time grade 9 pupil, and combined boxing and school.

She believes that education is a must if one is to be truly successful.

“There’s money in boxing, but without education I might end up on the streets when I am done with my boxing career,” she says.

“I want to lay a foundation for more women in boxing,” she says. “I want to see more girls and women getting empowered through sports and education.” 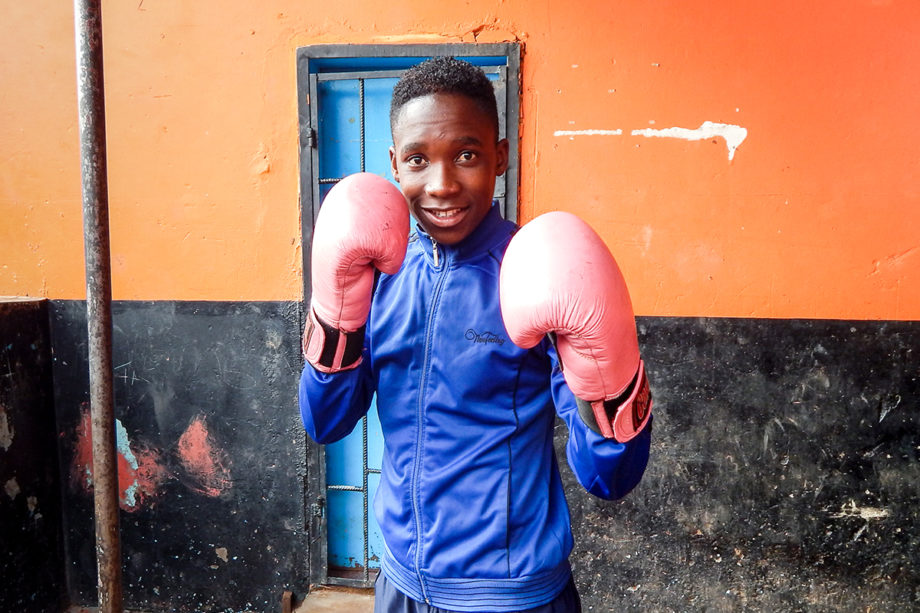 Barbara Banda is slowly becoming famous — not just for her punches but also for her looks.

She’s new on the professional circuit, and says she causes a fuss among her opponents and fans who question her gender identity.

Banda, 19, says she has grown used to this and is not offended. “Some people even demand for a physical gender check,” she says. “If necessary I agree to it.”

One of her goals is to become as famous as Esther Phiri and Catherine Phiri.

“I had a great admiration of Esther,” says Banda. “Then when Catherine rose to fame, I knew I too could make it. These two have been my greatest inspiration.”

Banda, who is from a slum in Mtendere, also has completed another goal—she finished her secondary school level. She says wants to be a role model for others just as Esther Phiri and Catherine Phiri were for her.

“Boxing-wise, I want to be a world champion,” says Banda. “Away from boxing, I want to work with children in marginalized communities, to see how I can help them believe in themselves and make the most out of their lives. I can’t state exactly what I want to study because I am still weighing options but it definitely has to do with working with young people.”

Editor’s Note: GPJ reporter Prudence Phiri is not related to any of the sources.