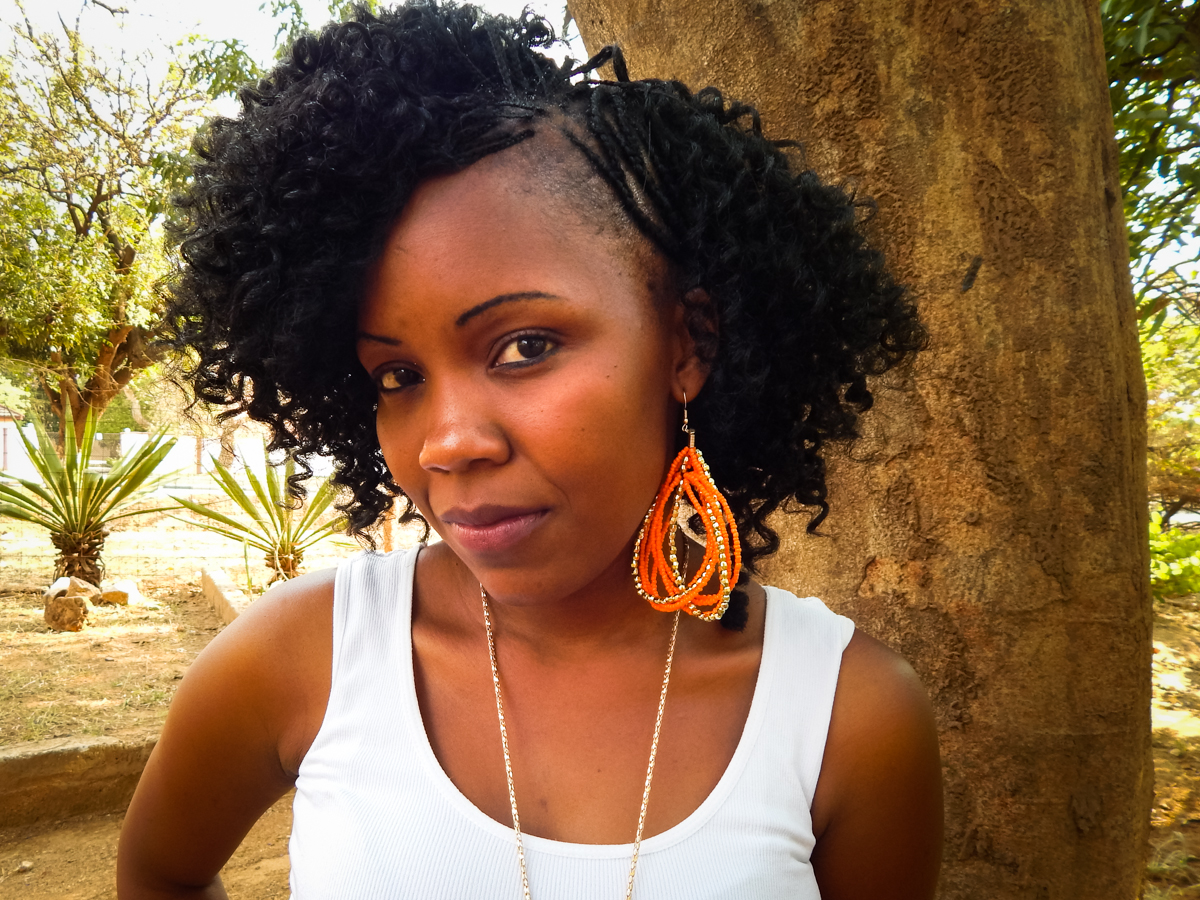 LUSAKA, ZAMBIA ­­– It is Saturday evening and Mary Banda, a hairdresser in Lusaka, Zambia’s capital, has barely paused to have a meal. Her small salon is packed with women whose hair is roughly plaited with cotton threads awaiting a final touch of weaves – hair extensions that are sewn or clipped onto one’s hair to increase its length and allure.

The women marvel at Precious Phiri, a 31-year-old client whose weave has just been completed. Someone asks her how much the weave – a mane of black, shiny human hair – cost.

Expensive weaves make her feel confident of her attractiveness, she says.

“Beauty is expensive,” Phiri says. “If you have to look beautiful, you have to spend. And for me, really, I feel these weaves are not even that expensive because you can use them over and over, even for a year or two.”

Phiri’s attitude is widespread across Africa.

About 5,000 kilometers (3,100 miles) away, in Douala, the economic capital of Cameroon, Sandrine Chia sits in a rocking chair at her office. Chia, a human resource assistant at a construction company, is wearing braided extensions made of Indian hair.

Like Phiri, she says the cost is worth the benefit.

“I wear them first for myself, to feel clean, and also for my husband,” she says. “You know a woman’s beauty lies in her hair, and her husband needs to find her beautiful, without which things could get offhand.”

From Southern Africa to West Africa, women are spending thousands of dollars to buy artificial hair, which is woven onto their own hair to increase its length and appeal.

Weaves reflect the African woman’s desire to conform to Western standards of beauty, social scientists say. But some women in both countries are deviating from that standard, saying that wearing their natural hair demonstrates African pride.

Colonialists introduced Western ideals of beauty to Cameroon in the 20th century, says Michael Ndimancho, a researcher on African civilization at the University of Douala. Fashion magazines continue to glorify those standards.

“What is of the West is becoming a model to most Cameroonians, with most women feeling backward or sidelined if not involved,” he says.

Ndimancho believes cultures should borrow what is good from each other but that people shouldn’t become alienated from their native culture – and that’s just what is happening with African women regarding their hair, he says.

Austin Mwange, a social sciences researcher at the University of Zambia, agrees. Zambian women used to braid their own hair, but now they copy Western hairstyles they find on the Internet, he says.

“The world now is a global village, and a woman in Zambia is capable of having an item from London in just days without even traveling there,” he says.

While the weaves business has provided job opportunities for many Zambian women, they have lost their originality, Mwange says. Some even starve their families to save money for an expensive weave.

In Zambia, wearing purchased hair has been the norm for decades, says Mwanabibi Sikamo, the operations manager of Zed Hair, a website and blog that provides advice and support for women who wish to wear their hair naturally.

Sikamo, who also co-administers a similar group on Facebook, Zedian Naturals, says she hears from schoolgirls who can’t wait to have artificial hair.

Phiri says women in Zambia wear hair extensions because maintaining their natural hair is difficult. Most Africans have kinky hair, which she says is unattractive.

Banda, her hairdresser, agrees. Over the years, she has come to appreciate weaves because they add to a woman’s beauty, she says.

“Even the Bible says the woman’s beauty is in her hair,” Banda says. “Hair means even the weaves.”

“I find weaves easy to maintain because a woman does not need to wash and blow them every day,” she says. “Imagine the hassle of blowing your hair every day just to make it look presentable.”

Some of the company’s weaves are made locally. Others are imported from Nigeria, China and the United Arab Emirates, he says. Most of the weaves are made of human hair mixed with synthetic hair; others are purely synthetic.

One reason many African women embrace Western-style hair is that men often prefer it.

“Which man would want to be associated with a woman with bad, kinky hair?” he asks. “Hair defines the beauty of a woman. It is unfortunate that most of our women are not blessed with long, beautiful hair, so weaves do the need for them.”

In Cameroon, wearing natural hair has long been associated with poverty.

Women who style their natural hair cannot afford to buy artificial or human hair, says Chenwi Cherif, a hair stylist in Bamenda, the capital of Cameroon’s Northwest region. He has been in the trade for 10 years.

Because local tradition requires women to shave their heads after their husbands die, short hair is interpreted as a symbol of mourning, Cherif says. Consequently, women often prefer to wear long, artificial hair.

In Douala, Pamela Awah, a sales attendant in a retail shop that sells hair extensions, says the shop has monthly sales of about 500,000 francs ($950).

Emmanuel Chiangong, a hair stylist and trainer who owns four hair salons and two beauty training schools in Douala, says he receives about 50 clients a week at his four salons. Most want artificial hair weaves.

Most women wear weaves just because they grew up in a society that finds them stylish, Chiangong says.

“They do things without questioning,” he says.

When worn consistently for a long time, weaves may cause one’s natural hair to fall out, health experts warn.

Dr. Samuel Ngwane, a Douala-based dermatologist, says women with hair problems regularly approach him – in public as well as at his clinic – for advice.

Tight extensions damage the roots of one’s natural hair, causing the hair to fall out, he says.

Hair loss stemming from weaves can cause bacterial infections, he says. In some cases, hair never regrows from affected spots.

Some women are slowly gravitating toward natural hairstyles.

Cherif, the Bamenda stylist, has noticed more and more women choosing to wear their hair natural over the past four years, shunning weaves and extensions, he says.

Some clients ask him to style their hair in dreadlocks, a style in which the natural hair is not combed but twisted into tight braids.

Cherif also sees an increasing number of clients who want to keep a short crop of natural hair – and even some who choose to shave their heads, in defiance of traditional Cameroonian practice.

Julian Kwakelo, 27, has made the transition to natural hair. She purchased weaves for years.

But now, Kwakelo found a way to wear her natural hair in an attractive style that is much less expensive. These days, she cuts and colors her own hair for just 700 francs ($1.30).

The same trend is taking place to the south, in Zambia.

Anna Phiri, a Zambian woman who styles her natural hair, says women are spending too much money on weaves.

“I feel we need to appreciate our natural looks and maintain our natural hair,” she says. “A woman still remains beautiful in her natural hair – unless someone told me I don’t look so.”

To encourage women to love their own hair, some Zambian celebrities are donning natural hair on national TV.

Chilufya Mwelwa, a TV producer and presenter at the state-owned Zambia National Broadcasting Corp., has maintained a short crop of her natural hair since 2012, when she joined the station. She usually styles it herself.

She sometimes styles her hair and covers it before bedtime so it’s in place when she wakes up as early as 4 a.m. to prepare for work.

“Whether body, hair, being fit or having big bones, it’s all about embracing it, because that’s nature’s gift to you,” she says.

People have started appreciating Mwelwa’s looks, she says. Some viewers approach her to say she has inspired them to feel more confident wearing their natural hair in public.

Margaret Chisulo, a newscaster at the station, says she sometimes weaves her hair but that she usually goes on TV with natural hair, a short Afro.

As both a presenter and former model, she has found that people have appreciated her more for her natural looks.

“Designers have made me appreciate my natural looks,” she says. “It’s about my skin, height, but more my hair. I think we need to appreciate our natural looks, because it is our identity [as Zambians]. Identity is important, and it starts with us, we in the limelight.”

If the natural hair trend continues, the market for weaves will diminish, Chenwi says.

“As women explore more hair styling options, the demand for weaves will most definitely be affected,” he says.

Ndimancho, however, says he doesn’t see that happening as long as African women continue to embrace Western standards of beauty.

GPJ translated one interview from French.