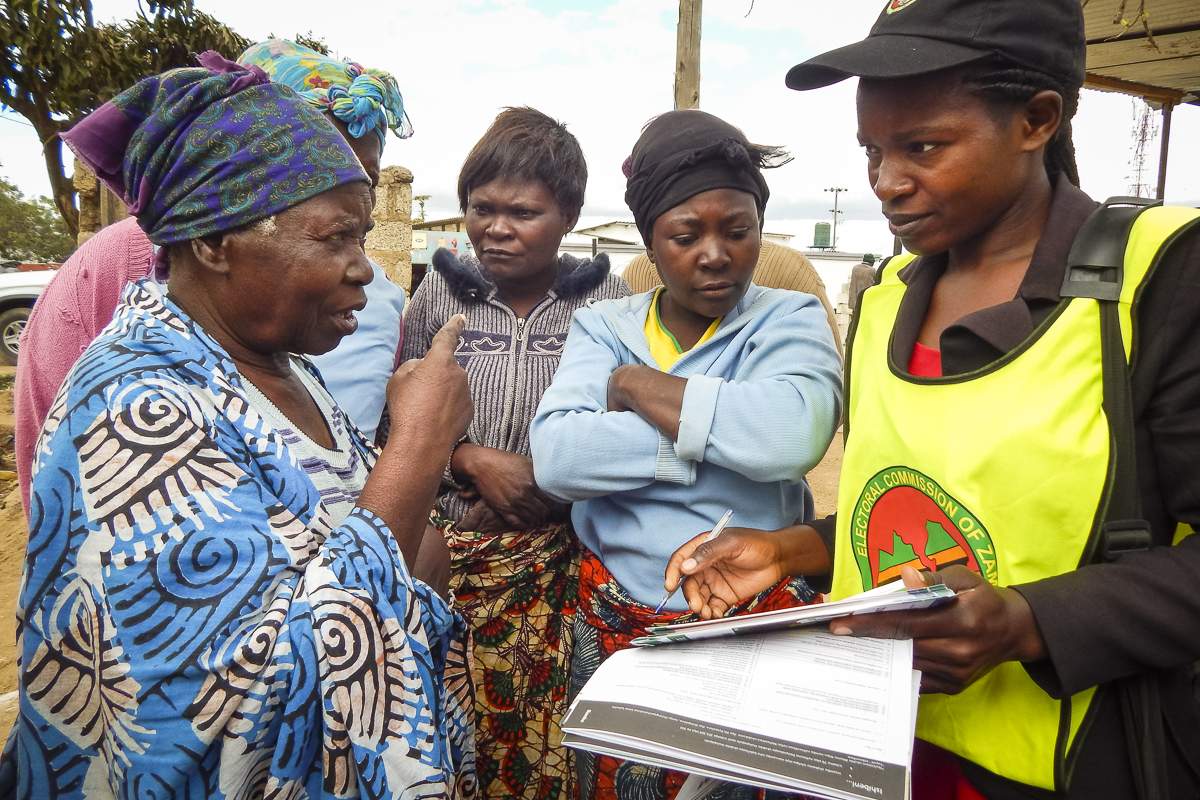 LUSAKA, ZAMBIA — The sound of a megaphone attracts the attention of William Banda, a cobbler in Kanyama compound, one of Lusaka’s largest slums.

Banda abandons his shoe repair work for a moment to listen to the message. Two ladies — dressed in aprons branded in the Electoral Commission of Zambia logo and colors — announce upcoming general elections and a referendum through the megaphone. They urge people to vote.

Banda says he will participate in the elections but he doesn’t understand the referendum.

“I just hear that there is a referendum, that we have to vote ‘yes’ or ‘no’ for some rights, but I have not been told in detail what those rights are,” he says. “So I don’t know how I will vote for something I don’t understand.” 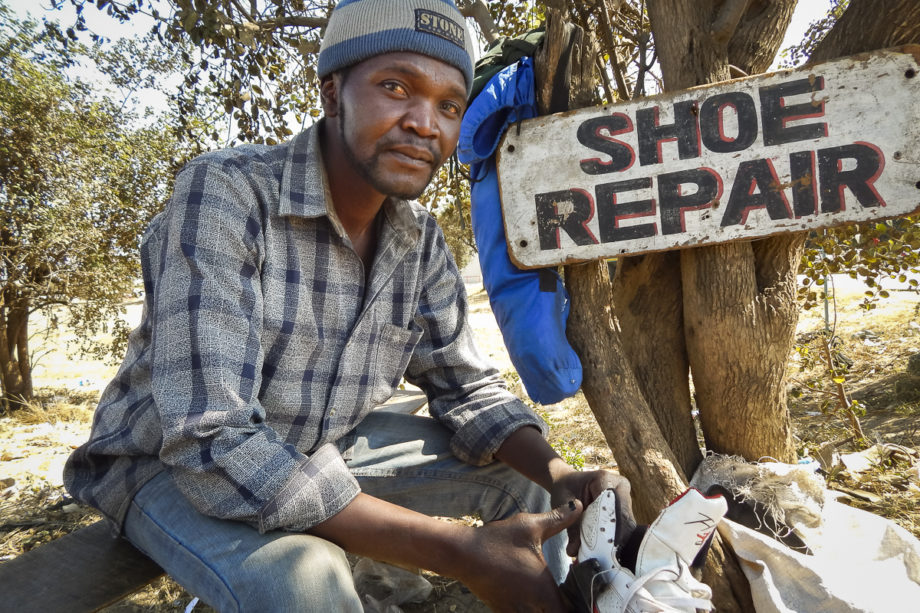 William Banda, a cobbler, says he’s asked electoral educators for information on the referendum, but their answers aren’t helpful.

Zambia’s referendum, scheduled for Aug. 11, the same day as general elections, aims to revise the country’s Bill of Rights – a set of laws within the constitution designed to protect the rights and freedoms of individuals.

It also aims to repeal and replace Article 79 of the constitution, which provides guidelines for constitutional amendments.

Like Banda, many others in Zambia say they don’t understand what’s at stake in the referendum. A group of advocacy organizations want the referendum vote postponed, saying citizens have not been given enough time to study the proposed laws. The Electoral Commission of Zambia, however, says it has deployed people all over the country to educate people about the referendum.

Various constitutional reviews have been in process since 1972. In January 2016, President Edgar Lungu assented to the Constitution of Zambia Amendment Bill 2015, which ushered in new laws relating to elections, among other things.

But certain amendments, including those related to the Bill of Rights and guidelines for future amendments, were left out so they could be sent to voters via a referendum.

The proposed Bill of Rights includes additional articles on economic, social and environmental rights. The right to health care services, decent housing, food of acceptable standard, clean and safe water, decent sanitation, social protection and education, are among the provisions in the proposed law.

Voters will consider whether to add the articles, as well as whether future changes to the Bill of Rights should only be made via referendum.

All Zambian citizens age 18 and over who possess a national registration card will be eligible to vote in the referendum, says Triza Lungu, the legal counsel for the electoral commission.

But to many of those eligible voters, the referendum is baffling.

“I don’t know anything about the Bill of Rights, I might end up voting to be killed,” says James Mwiinga, a bike repairman, amid laughter.

Naomie Mwanza, a school teacher in Lusaka, says she has a copy of the proposed Bill of Rights, but still doesn’t feel she has enough information.

“I managed to get a Bill of Rights draft from the newspapers, but it is difficult to understand because I do not have the copy of the current Bill of Rights that we are seeking to replace,” she says. 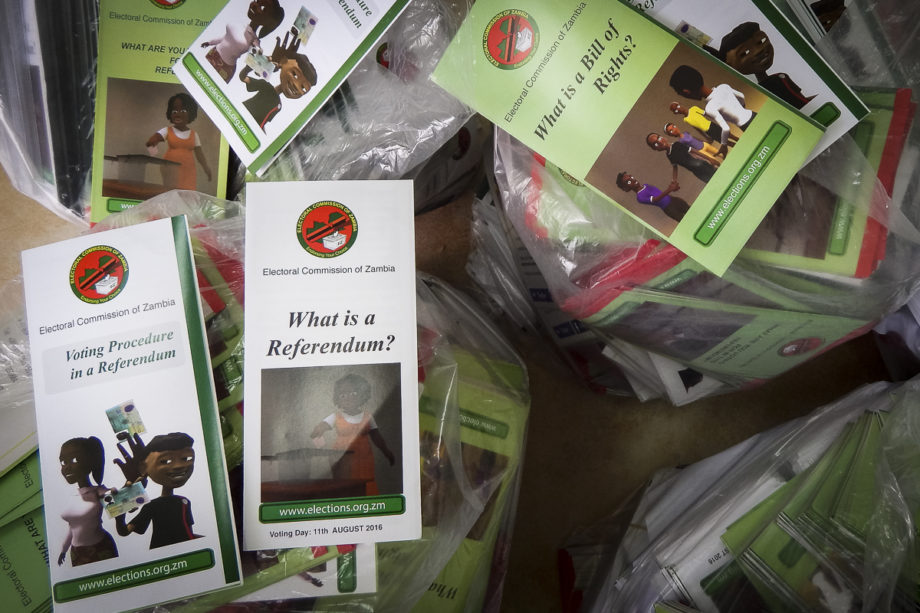 Leaflets with messages about the referendum and elections await distribution by voter education facilitators at the offices of the Electoral Commission of Zambia.

In May, the Non-Governmental Organisations’ Co-ordinating Council expressed concern over the limited time voters had to learn about the proposed changes. The government released the proposed Bill of Rights in May, giving citizens about two months to study it before the referendum.

But the electoral commission says it is doing its best to prepare voters. 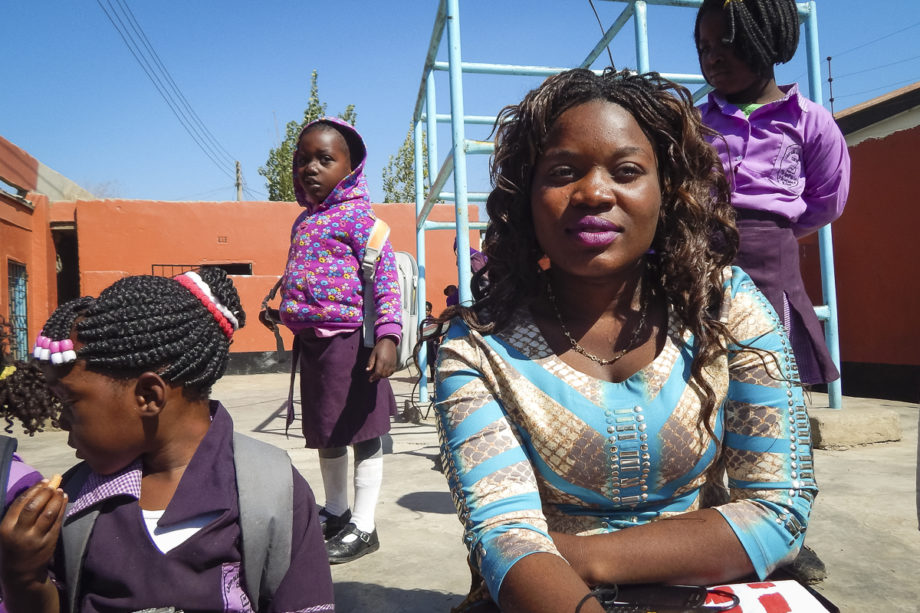 Noamie Mwanza, a private school teacher in Lusaka, says it’s difficult to understand the proposed changes to the country’s Bill of Rights without seeing the existing Bill of Rights.

Lungu, the commission’s legal officer, says the commission has trained election officers who are educating citizens on elections, bill of rights and the referendum.

She says the commission has also translated the Bill of Rights into seven major local languages — Bemba, Kaonde, Lozi, Lunda, Luvale, Nyanja and Tonga. It has also produced comic books and videos to simplify the message.

“We believe that by the time it is Aug. 11, people, even the most average Zambian, will understand what they are voting for in the referendum,” Lungu says. “We have done so much to ensure everyone understands.”

Some groups have also taken it upon themselves to educate the electorate on the proposed changes.

The Policy Monitoring and Research Centre (PMRC), a local organization, recently held a public discussion at the National Institute of Public Administration where constitutional experts and electoral commission officials interacted with members of the public on the Bill of Rights.

The organization has also created a mobile phone app known as the PMRC app that allows easy access to the Bill of Rights, says Bernadette Deka, the executive director of PMRC. There, voters can also find the amended constitution and other documents.