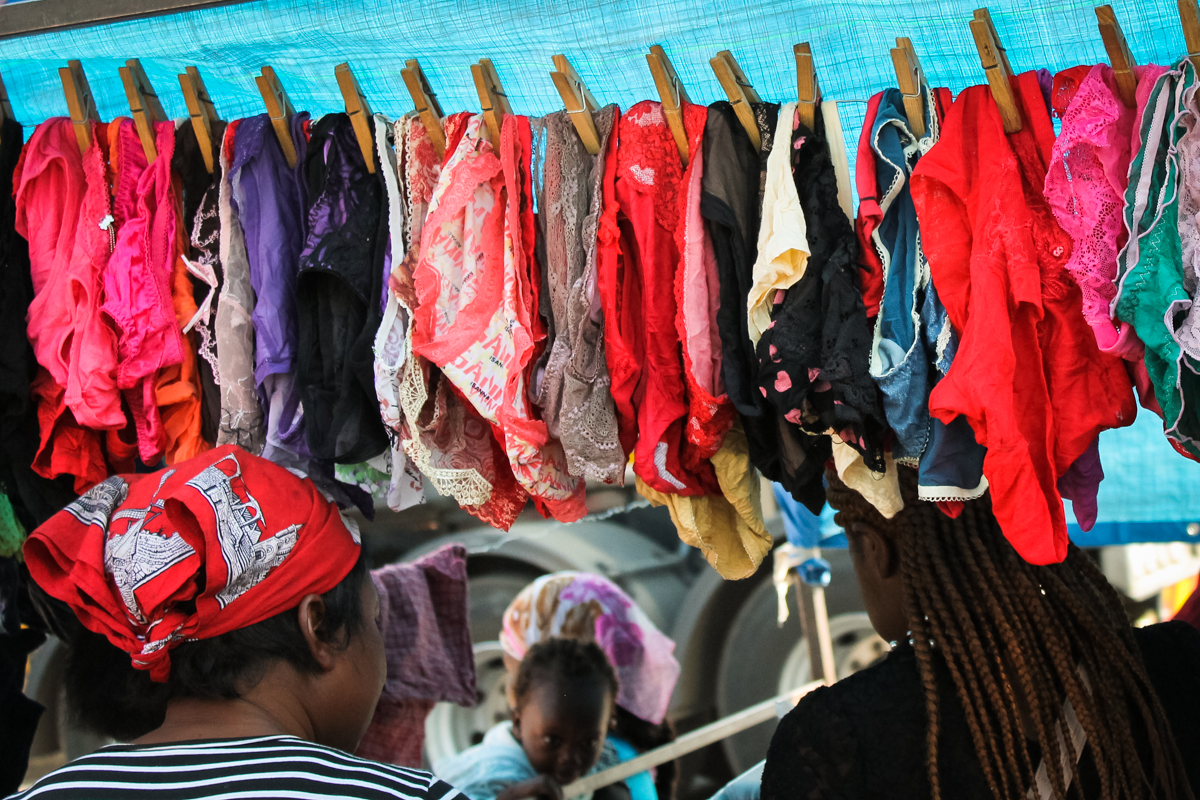 Women surround her stand, stretching underwear of different colors and sizes as Bwembya sorts them out.

Bwembya has been selling secondhand women’s underwear, locally referred to as pants, for the past 15 years.

Her business is illegal. Police have confiscated her goods on three occasions. But the demand for the products, and the profit she makes, encourages her to stay in business.

Locally made undergarments that are affordable are often low-quality, many Zambians say. Secondhand underwear are less expensive and come in attractive colors and better fabrics.

“Secondhand underwear sells like hot cakes, especially for women,” she says. “Everyone wants them because they are unique and durable.”

The trade in secondhand underwear is flourishing in Zambia despite a ban on their import and sale. Health experts warn that wearing used intimates – often donated in wealthier countries, then shipped to Zambia and other nations – can cause fungal and viral infections, but many people prefer the secondhand goods.

Zambia Bureau of Standards (ZABS) officials have been confiscating the products whenever they find them, but traders keep bringing more. The agency now targets secondhand clothes importers and has partnered with the police and the Zambia Revenue Authority to fight the flow of the contraband into the country.

Secondhand underwear sells like hot cakes, especially for women. Everyone wants them because they are unique and durable.Eunice Bwembya, secondhand women’s underwear seller at Lusaka’s New Soweto Market

The trade in secondhand clothes is a big industry in Zambia and most of sub-Saharan Africa. Those products made up 26.8 percent of clothing imports in sub-Saharan Africa in 2003, according to a 2005 Oxfam International report.

Zambia banned importation and sale of secondhand underwear in 2006 for health reasons, says Hazel Zulu, the head of marketing and public relations for ZABS. Some media reports place the ban in 2012. Rwanda, Zimbabwe and Ghana have also imposed bans on the products.

To enforce the ban, ZABS over the years has carried out routine market surveillance and inspections in major towns and confiscated bales of used underwear, Zulu says.

Between January and March, ZABS confiscated and destroyed 89 bales of secondhand underwear worth 133,500 kwacha ($13,700) from suppliers in Lusaka. Bales vary in weight but are often around 100 pounds.

Secondhand underwear can cause infections if the previous user was infected, says Dr. Maureen Chisembele, a gynaecologist at University Teaching Hospital in Zambia. These can include ringworm, yeast infections and sexually transmitted infections such as gonorrhea and syphilis.

Despite the risks, secondhand underwear is in high demand in Zambia. Bwembya sells a bale of the underwear in three days, she says. An average bale contains up to 600 pairs of underwear. 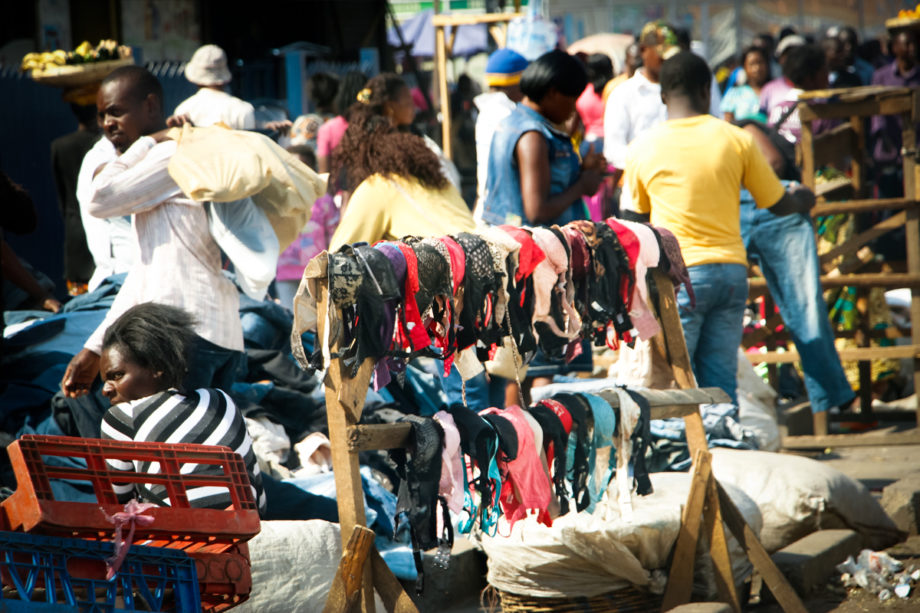 The Zambia Bureau of Standards says secondhand bras have also been banned.

“I make almost 1,500 kwacha ($150) profit if the bale has quality pants, but sometimes I make less than that. It’s good business,” she says.

The secondhand underwear are safe as long as they are washed thoroughly and ironed before wearing, Bwembya says.

“I wear secondhand pants, and I have not suffered from any diseases because of the pants,” she says, referring to underwear.

Christabel Musonda, another trader of secondhand underwear, says she too wears such underwear and has never had health problems.

“When I order the pants, I get some for myself, and I have not suffered from diseases related to the use of pants. I just wash them and iron them,” she says.

But Chisembele says that may not be enough.

“The risk is reduced if the underwear is properly washed and ironed but there are some bacteria that are resistant and can survive harsh conditions for a long time,” she says.“Washing may sometimes not get rid of some of the bacteria, especially those that come with discharge from the body of the previous user.”

Secondhand underwear sells like hot cakes, especially for women. Everyone wants them because they are unique and durable.Eunice Bwembya, secondhand women’s underwear seller at Lusaka’s New Soweto Market

Kuwala Zimba, a woman who wears secondhand underwear, says she has had vaginal fungal infections a number of times but that her underwear is not the cause.

“Doctors say it is normal for women to have fungal infections, and no doctor has ever told me that I should not wear secondhand underwear,” she says. “The doctors only insist on making sure the pants are properly washed and ironed.They have never said that pants should always be new.”

Some secondhand underwear come soiled, leading some people to avoid them.

Sarah Lungu, a social worker, says she once bought used underwear that was soiled. That experience turned her off from buying them again.

“I felt so disgusted that I don’t ever want to buy a secondhand pant,” she says. “Imagine going to wash a soiled pant. No matter how much I wash it, I cannot be comfortable wearing it.”

ZABS officials make impromptu inspections in secondhand-clothes importers’ depots to check for the underwear, Zulusays. Bales of secondhand underwear are often hidden inside bales of other clothes, she says.

Secondhand underwear can cause infections including ringworm, yeast infections and sexually transmitted infections such as gonorrhea and syphilis.

The secondhand clothes are sourced from wealthy countries, often in Europe and North America, and sent through a developing country, according to the Oxfam International report.

ZABS has warned importers that they risk having their permits withdrawn if they are repeatedly found stocking secondhand underwear.

To stop the smuggling of the products, ZABS has partnered with the police and the Zambia Revenue Authority, which checks consignments for taxation, Zulusays.

ZABS is also running a program on ZNBC’s Radio 4 and articles in newspapers to educate the public and traders on the dangers of using secondhand underwear.

“We can help people by discouraging them from putting on secondhand underwear. They are unhygienic,”Chisembele says.

Bwembya says she will continue selling the secondhand underwear as long as demand is there.

“What can deter me from doing this business is when the source runs dry or there is no demand from the people,” she says.