Skip to main content
The story you are reading was published on Monday May 1, 2017. To read more recent stories click here. 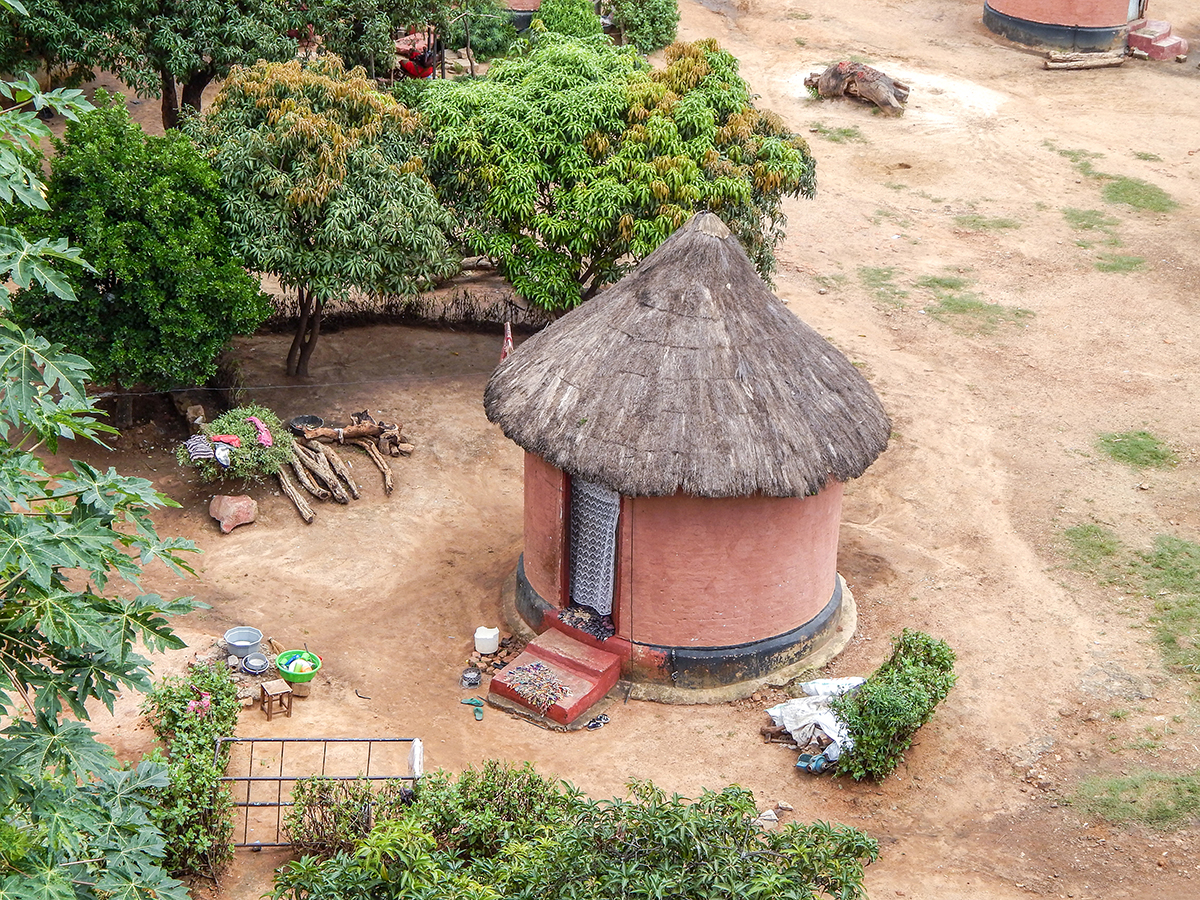 LUSAKA, ZAMBIA — The idea of having all the Zambian cultures from every corner of the country showcased in one place marked the beginning of Kabwata Cultural Village in Lusaka, the capital of Zambia, says Patrick Siankondo, chairman of the Kabwata Visual Arts and Cultural Association.

“In 1974, the government wanted to have all the cultures from the nine provinces in one place,” says Siankondo. “That is how artists from all the provinces were called to come and be showcasing their artworks here. That is how Kabwata Cultural Village began.”

“Now that we have 10 provinces, all the 10 are represented here,” he says. 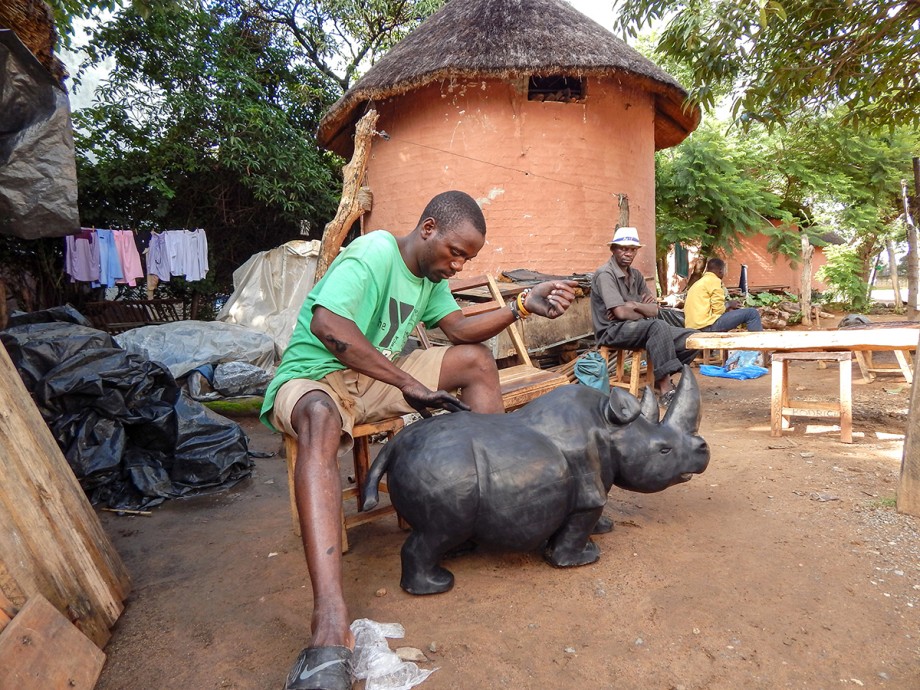 Charles Sibalwa, an artisan, polishes his latest work, a wooden rhino, before preparing it for sale. The sculpture will be priced at about 2,500 kwacha [$250].

It’s a 10-minute drive south of the city center to Kabwata Cultural Village, along Burma Road in Lusaka City.

The thatched roofs of the chalets stand out among the modern houses in the area, giving Kabwata Cultural Village a unique look. Siankondo says the thatched houses are symbolic of Zambia’s heritage.

“Back home in the villages, people live in grass-thatched houses,” says Siankondo. “We thought of having them here so that, as a part of our heritage, it also symbolizes oneness. It shows us that where we all come from, whether east, north, south or west, we are one, we share the same houses.”

The village is renowned for rich artworks that showcase Zambia’s tradition and culture: wood sculptures, beads, masks, a variety of African fabrics, drums and other traditional musical instruments. Today, according to Siankondo, it’s somewhat difficult to identify which provincial tradition a given work belongs to, because the artists have all learned from one another. For example, Siankondo says, artists from Eastern Province, who specialized in making Nyau dance costumes, can now make Makishi dance costumes in the style of Western or Northwestern Provinces.

Food from all 10 provinces of Zambia is offered at a cost of 40 kwacha [$4] per meal. “This food consists of nshima, mainly of maize meal, cassava meal or millet meal, with vegetables and game meat or any delicacy from any part of Zambia,” says Rosa Siamachoka, the manager of the restaurant at Kabwata Cultural Village. 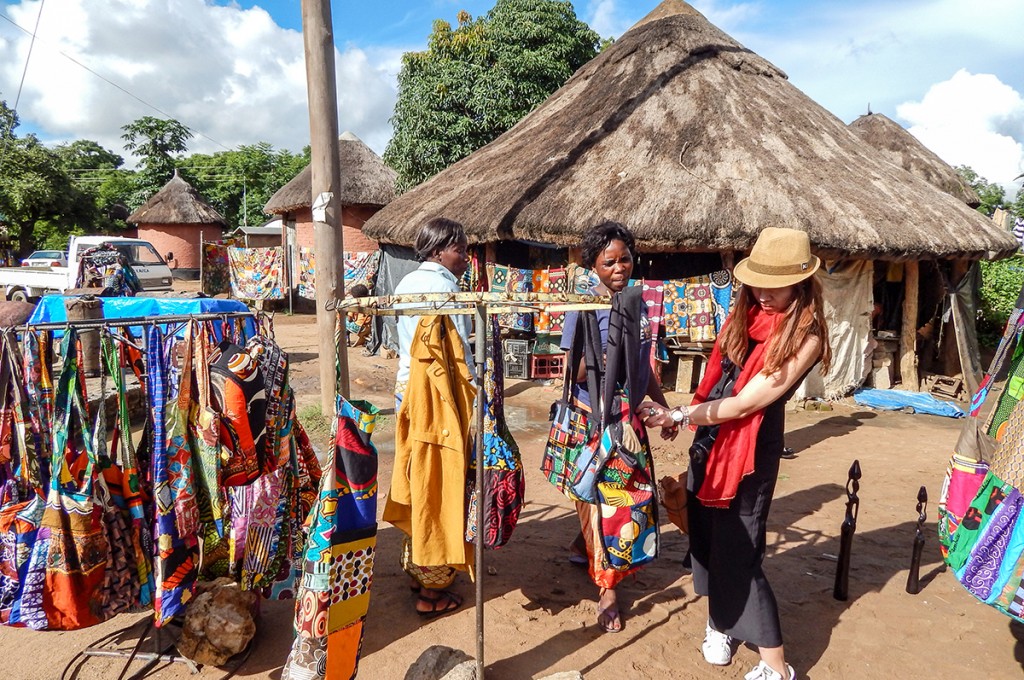 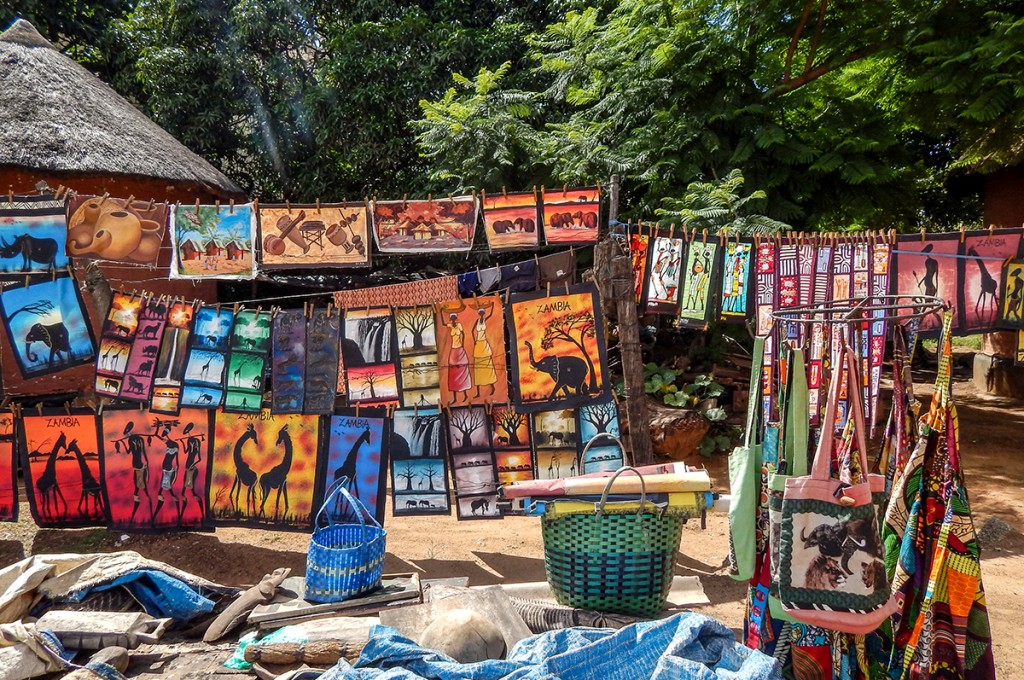 The works of 121 artists are displayed throughout the village. Many, including these paintings, textiles and bags, are for sale. 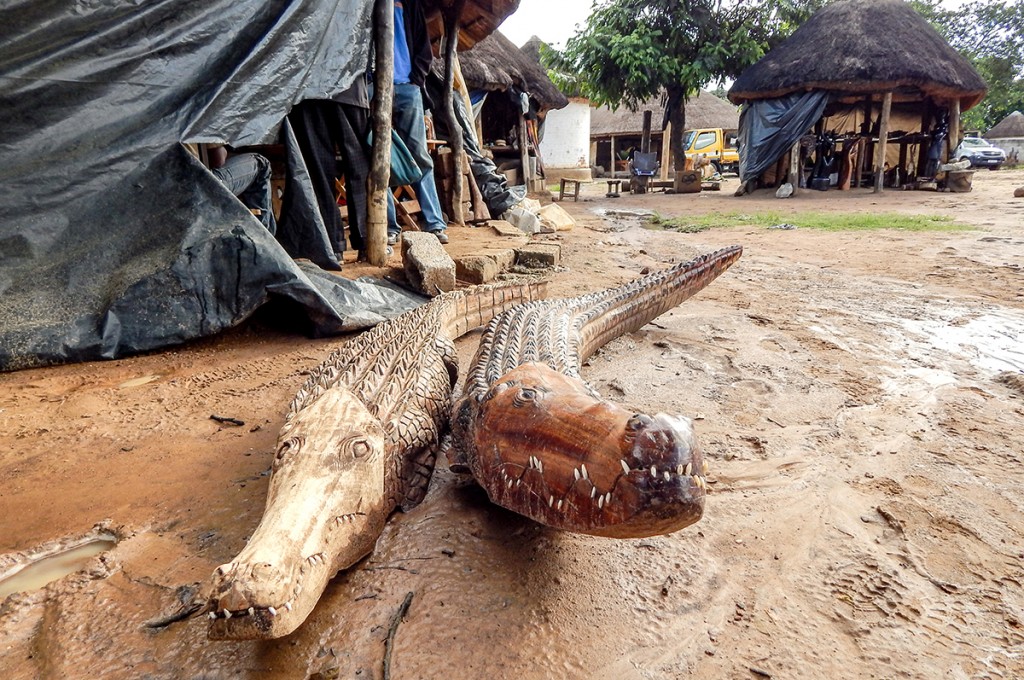 Wooden sculptures, such as these crocodiles, are carved on-site. 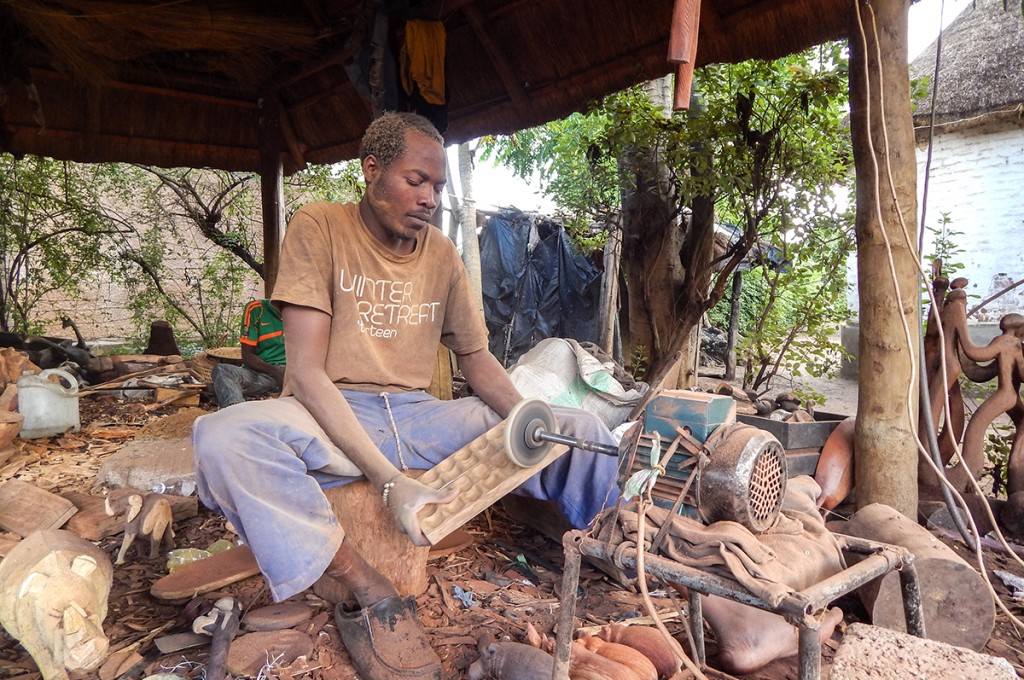 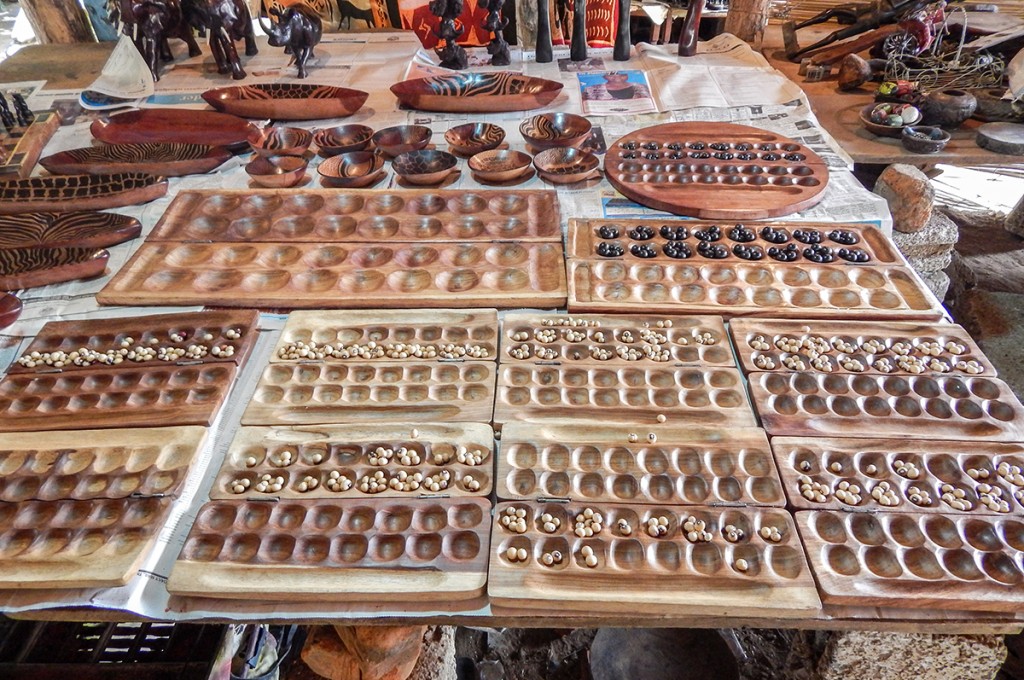 Wooden bowls, nsolo boards and figurines are available for purchase in the village. 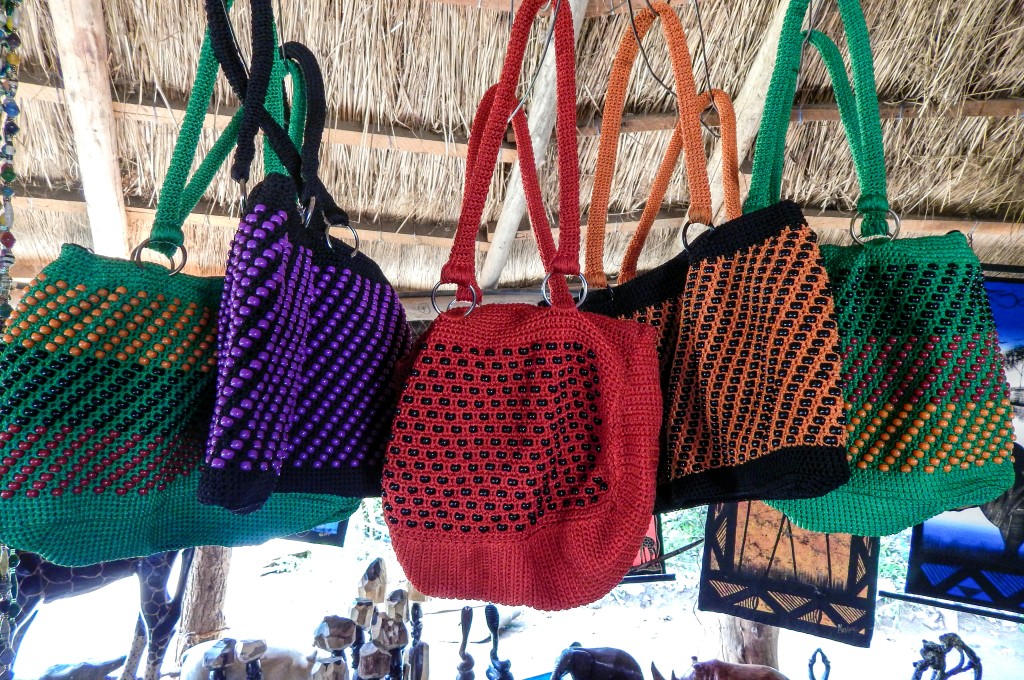 An assortment of woven bags with bead embellishments hangs from the roof of a chalet. 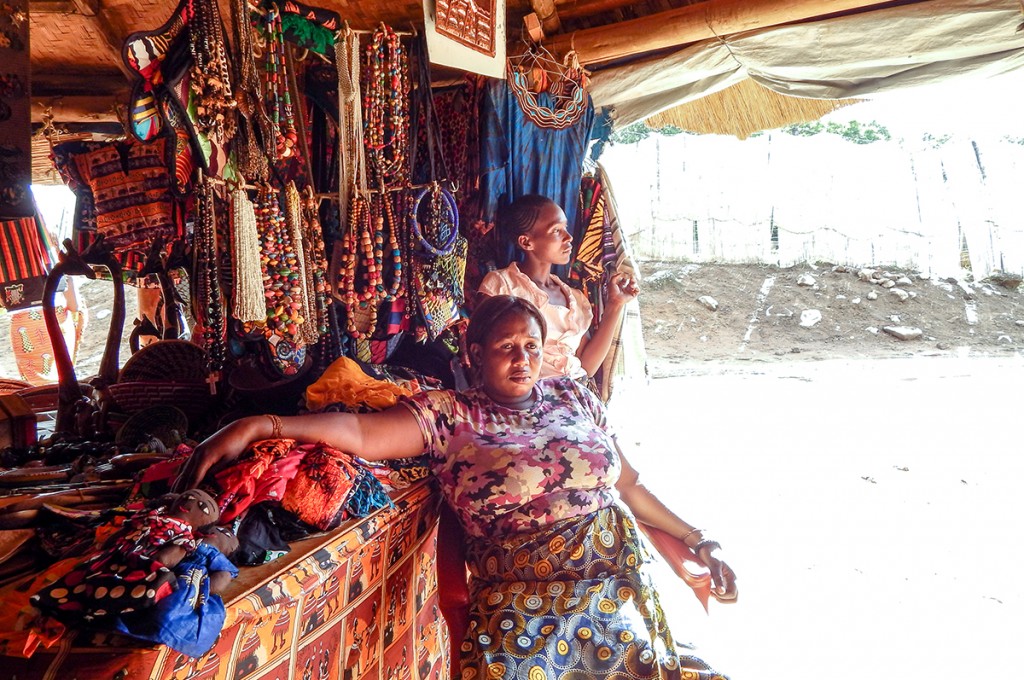 Two women wait for customers at their chalet. According to Patrick Siankondo, chairman of the Kabwata Visual Arts and Cultural Association, more than 50 people visit the village on a busy day. 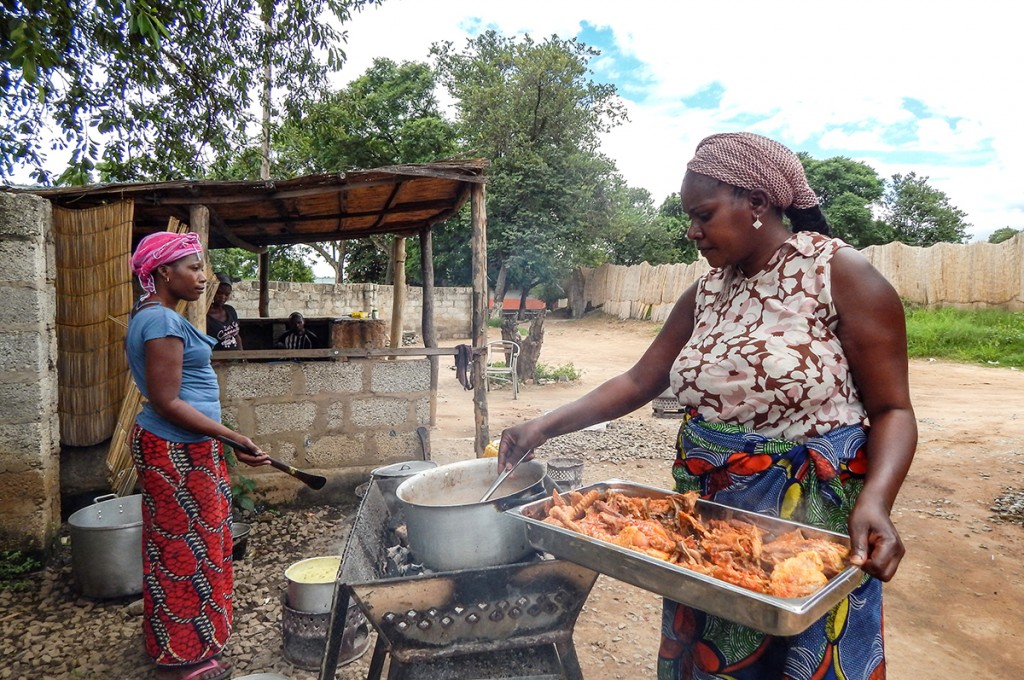 Elita Siamane prepares a chicken dish for the restaurant at Kabwata Cultural Village. The restaurant serves a variety of Zambian cuisine, all with local ingredients, everyday except Sunday. 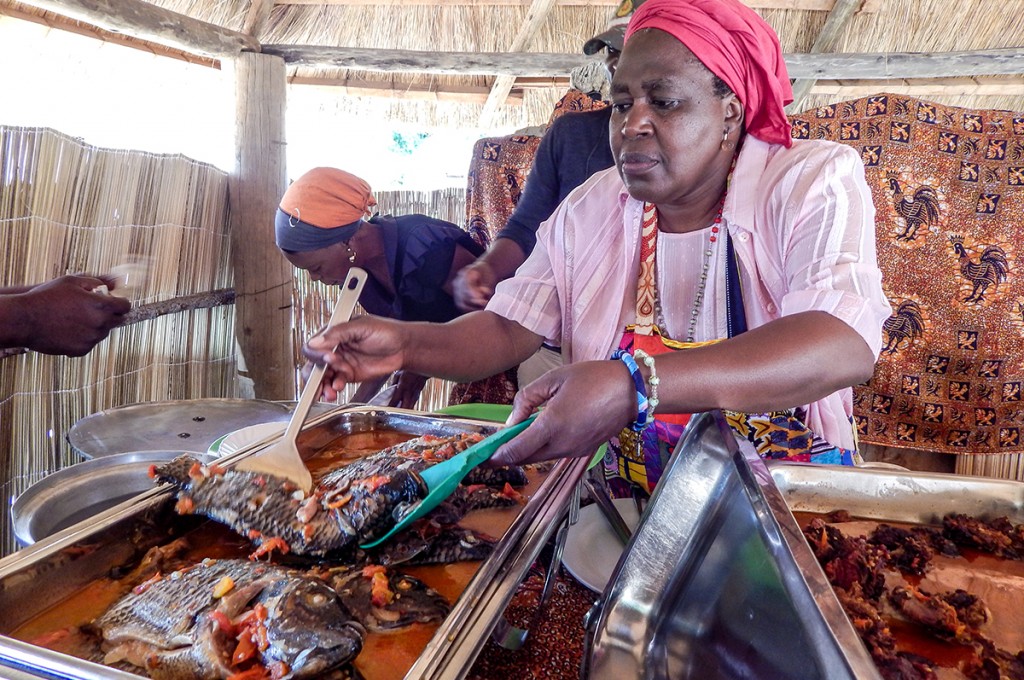 A meal at the restaurant costs 40 kwacha [$4]. Rosa Siamachoka, the manager of the restaurant, says she has many foreign customers, but the food is mainly served to local people. 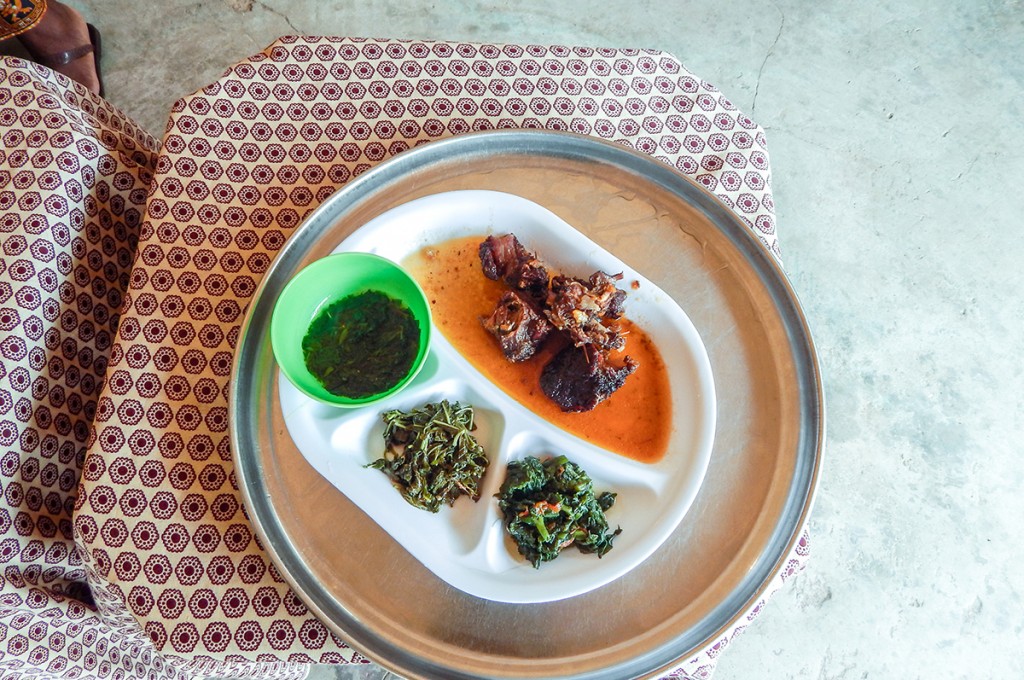 This dish of impala meat with pumpkin leaves, sweet potato leaves and okra was prepared at the restaurant.

Siankondo says the village has 121 artists from the 10 provinces. He says that artists stay and work in some of the chalets around the village, and other chalets are used for display.

Artists who come to the village to sell their work can remain as long as they wish, if they pay accommodation fees. “We have chalets that are used as accommodation for our artists that come from afar,” Siankondo says. “They only pay 100 kwacha [$10] per month, while for displaying their artwork here, they pay 50 kwacha [$5] per month.”

When business is good, more than 50 people visit the village each day, says Siankondo.

He says the village offers traditional dances and music on special occasions like Independence Day.

Saizuaze Chibbamubbamu, an artist at the village, says crafts like sculptures or carvings may cost as little as 5 kwacha [50 cents] each.

“We have affordable prices here that suit anyone’s budget,” Chibbamubbamu says. “We have things that cost as little as 5 kwacha, but crafts can go as high K10, 000 (about $1,000), depending on the type of craft and size of the craft.”

Patrick Siankondo plays the malimba, a traditional instrument, for the entertainment of his friends, tourists, restaurant workers and fellow artists in Kabwata Cultural Village. The malimba often makes an appearance on special occasions, such as Independence Day, in the village.

Kabwata Cultural Village is a renowned art destination in Lusaka. Amy Zhang, a visitor from the U.S., says she was impressed with the artworks.

“I definitely want to come back here,” she says. “The artwork is amazing. So are the people around here.”

Siamachoka, the restaurant manager, says she has many foreign customers, but the food is mainly sold to local people. “Food is something that people are careful with,” Siamachoka says.“Many foreign people fear the food might react badly to them. Others that are courageous or have eaten such kind of food before do buy the food.”

The restaurant’s menu of Zambian dishes changes daily. These include a maize or cassava nshima, served with vegetables such as pumpkin leaves, sweet potato leaves or okra. There’s also free-range, local chicken, buffalo or impala meat.

“We operate everyday except on Sunday,” says Siamachoka.“Our clientele is mainly the local people. But we are appealing to even the foreigners that come in, to test the food so that they have a complete feel of Zambia.”